Rider Interview: World professional road champion at 24 isn’t too shabby, but when you look at the young Michal Kwiatkowski’s build up to his Rainbow ride it is not so surprising. We caught up with the Pole to hear his views on life as the World champion.

Michal Kwiatkowski was double European champion (road race 2007, time trial 2008), Polish National road champion in the under-23 category before he turned professional. After a year with Caja Rural he joined RadioShack, and placed third overall in the Driedaagse van West-Vlaanderen, the Three Days of De Panne and the Tour du Poitou-Charentes. In 2012 he was snapped up by the Omega Pharma – Quick-Step squad and carried on with a load of top class results including being part of the World team time trial gold medal winning selection in 2013. That same year he also showed his class with top ten placings in Tirreno–Adriatico, Amstel Gold Race, La Flèche Wallonne and Grand Prix de Wallonie with 11th Overall in the Tour de France. But it was in 2014 that the young Pole consolidated his rise with his World title to go with another national title and wins in: Volta ao Algarve, Trofeo Serra de Tramuntana and Strade Bianche, with top five spots in the Tour of the Basque Country, Tour of Britain, La Flèche Wallonne, Liège–Bastogne–Liège and Amstel Gold Race. At 24 he is looking at a grand pelmarès. We managed to talk to the champion at the recent Etixx – Quick-Step training camp in Spain.

PEZ: How did you spend the wintertime?
As always I had my five weeks break and I chose this time to be available to the media and to use this time to show what we achieved this season. I started my training on the 10th of November, as normal, but maybe faster than last year with more kilometers, so everything has gone well and I’m healthy, that’s important and I’m happy with what I have done this winter up to now.

PEZ: What is it like to race in the Rainbow Jersey?
Yes, I rode Lombardy, but it was really hard and also strange as it was only the week after, so I was still in a little bit of shock. In Lombardy we had already made it [won the World championships] and that was incredible. Of course I couldn’t show myself as best as I could for a few reasons, but it was an incredible day, being supported by many people. Lets hope 2015 will be the same with a lot of support from the fans, from cycling supporters… that’s going to be amazing. 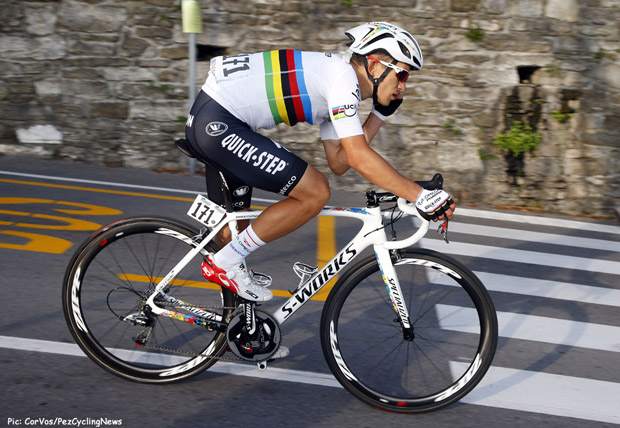 Lombardia was not a great race for the new World champion

PEZ: Do you know your race calendar for the season?
I started with San Luis, like two years ago. It’s a good race to start the season, the weather there is always good to make some racing kilometers, and it’s a good way to start the preparation. For the first part of the season my main aim is a good result in the Ardennes, because I just love those races. My next race will be the Tour of Algarve and then I change my program; instead of Tirreno I will be going to Paris-Nice and Milan-Sanremo and then again in Vuelta Pais Vasco. I think that little change with Paris-Nice will help me to be in shape and recover for Milan-Sanremo, as you know for the last years I couldn’t even finish Sanremo. I think with that experience, with the team we have changed a little bit for a better path. 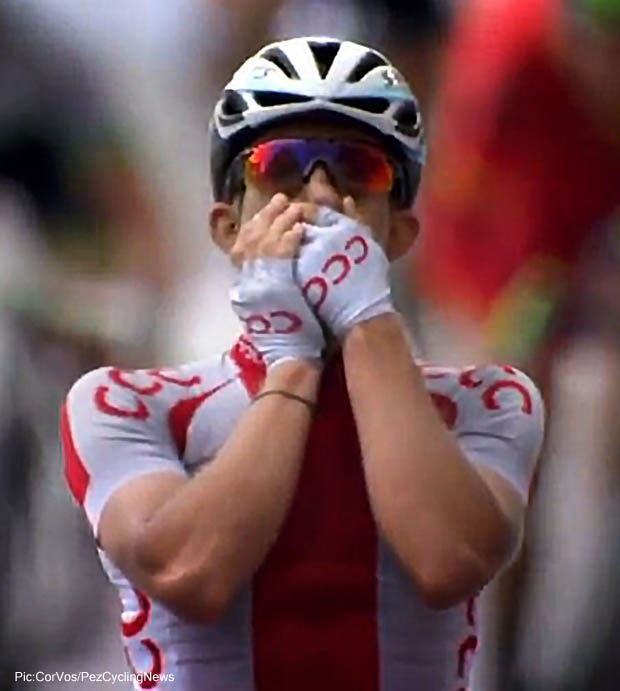 Happy to win the World championships

PEZ: Did you learn new things about your body last season?
Yeah, of course. Especially in the Tour, that is where you are trying to find your limits and I try to take as much experience from every race, not only from successful days, but I think you can learn more from bad days. I’m always trying to stay positive and thinking about what went wrong and what can be done better in the future.

PEZ: Are you trying anything new with your training this year?
I’ve not changed a lot. I’m trying to be calmer, not to be in the best condition at the start of the season. I tried to be competitive from the start in 2014 and maybe that was a little bit too much. I will try to get into the season a bit more easily and then prepare for the more important races for me. 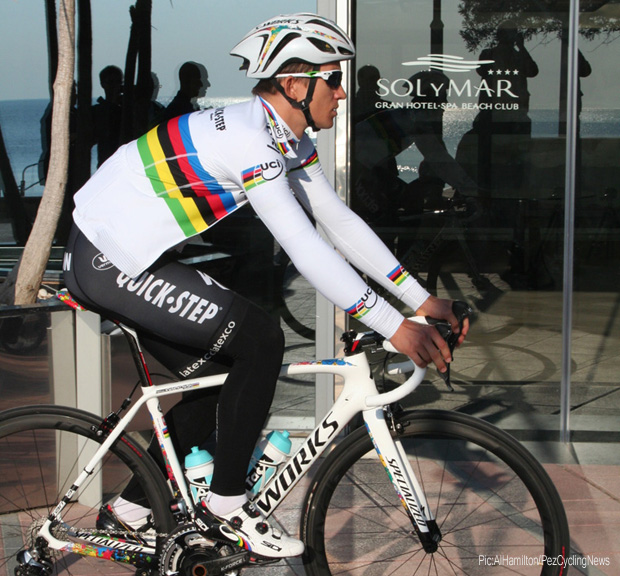 Training in Spain isn’t so bad

PEZ: What about the Tour de France?
That will be incredible racing in the Rainbow Jersey. I’m looking at the first week up until the ninth stage; it’s going to be like a Classic every day, which I always like. I don’t know what I can do there, but I will try to be in the best shape, of course, for the Tour. The preparation for the Tour; we will change it a little, I will go to the Tour de Suisse instead of the Dauphine, so I have more time to recover from the first part of the season and more time for training, which will help me. It’s still a learning process because I still don’t know my limits yet. I think the Tour is the race to move your limits up or forward. I hope to do something there, but I’m not really aiming for anything, but I know that the first week is really hard. like a Classic every day, so lets hope it’s going to be successful for Etixx – Quick-Step.

PEZ: What do you think of the course for the Worlds in Richmond?
I’ve not checked the course yet, but I think with the Polish Federation we will go there in the middle of May, sometime round then, to try and check the course. You know when you have something you want to defend, then that is going to be great motivation in the last part of the season to defend the Rainbow Jersey. But now I am thinking about the first part, it’s still a long way to Richmond.

PEZ: What race would you really like to win in the Rainbow Jersey?
I don’t know, it’s hard to say… the World championships again. I know defending is really difficult because I won the National title in 2013 and I couldn’t make it in 2014, so I know it’s really difficult to defend something that you have achieved in the past. That is something I would like to do. Thinking about what I want to do in the Rainbow Jersey; I just want to be present in the races that I want to be aiming for. 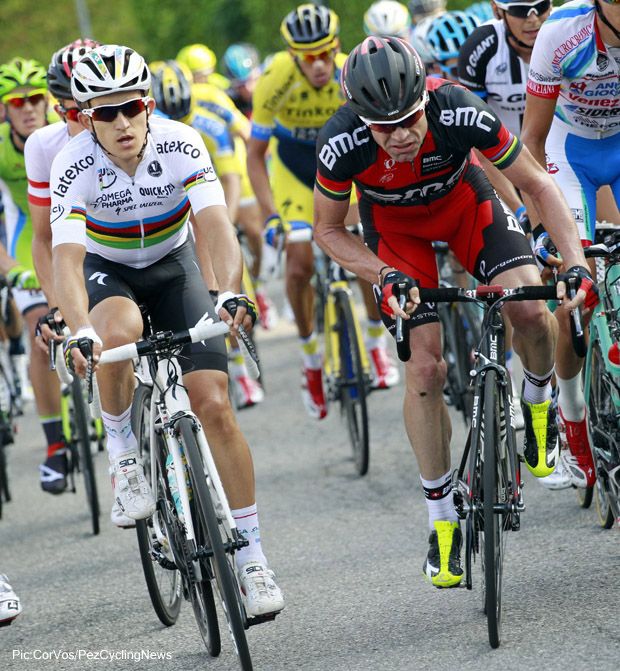 A new World champion next to an old one

PEZ: Do you think your opponents will be watching you more now?
Of course it will be more difficult now, as I will be easily recognized, but I never attack at the beginning of a race or by surprise, I try to win races during the hardest part of the race. If I’m recognized more now, then that isn’t going to help. Actually it’s going to be a new feeling, lets hope I can handle it.

PEZ: There is a bit of a boom in Polish cycling now, what help did you receive?
I was six years in the sports school for cycling and I really learnt a lot and I was supported by many coaches as well as my team. Other riders had different paths, like [Rafa] Majka and [Przemyslaw] Niemiec, they are different from me. I know there are many talented riders in Poland, I saw that when I opened the academy in my hometown, we had 120 in our academy, that’s a huge number. I could see how much cycling inspires them and that’s amazing. I think in the future there will just be more and more Polish riders in ProTour teams. Lets hope that Polish cycling is going to be bigger and bigger. 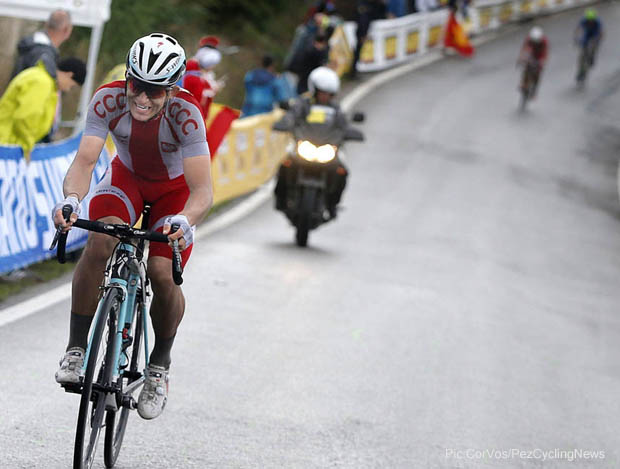 The move that made Michal Kwiatkowski World champion

PEZ: What does it mean to have countrymen like Michał Gołaś and Łukasz Wiśniowski in your team?
Not as countrymen, it’s just really important to have friends like them because I always spend time with them, we live in the same town, we train together and I get a lot of support from them. Also from my countryman; Marek Sawicki who is a soigneur here. So it is really important, but you see more and more Polish riders in professional teams and let’s hope that is going to be normal

PEZ: Has the Rainbow jersey changed you as a person?
You will have to ask my friends and the people who know me. I think I’m the same person, but you need to ask someone else. 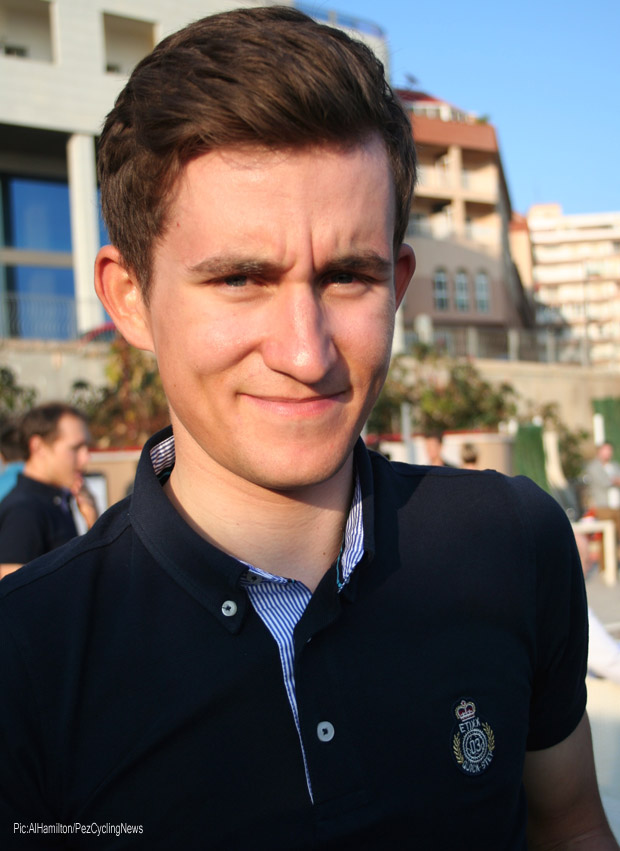