Mike Neel: Beating On The Door

In 1971, the year Lance Armstrong was born, there was not one US pro rider in the continental peloton. 34 years later, US riders have won eleven Grand Tours and are a big part of pro racing. Exactly when this change began is open for debate, but a rider named Mike Neel certainly made a difference…

The crossing of the Rubicon for US cycling came in 1976. At the Olympics in Montreal that year, outspoken Californian, George Mount caused a stir with sixth place on the rain soaked streets of the Quebec city. More significantly, but unheralded, was the ride by another Ca. resident, one-time hippie, Mike Neel. 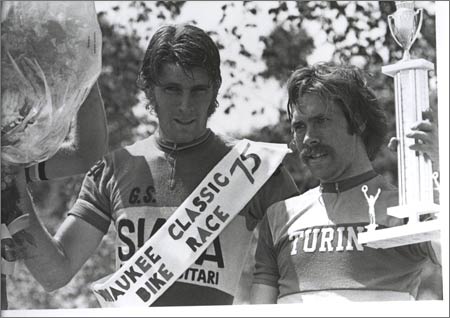 From deep in the archives… Mike Neel on the podium with another iconic American… does anyone recognize Jim Ochowicz?

Neel failed to finish, felled late in the race by one of the numerous crashes on the wet, oil streaked urban tarmac.

What shrewd observers noted though, was that Neel, a big man and known to carry a few too many pounds, had consistently ridden the tough Mount Royal climb side by side with the best amateurs in the world. Born in 1951, Neel came out of the San Francisco bay area during the ‘Summers of Love’.

The laid-back, zen outlook on life would serve him well in the mercenary world of European cycling. Neel got into cycling after falling in love with a Raleigh in the window of his local shop, Velo Sport Cycles of Berkeley, California. The shop’s owner, Peter Rich gave him credit on the beauty and would become Neel’s mentor. Neel was raw, natural talent and he rose rapidly through the ranks, winning the US ten mile track title and two US pursuit championships during his career. 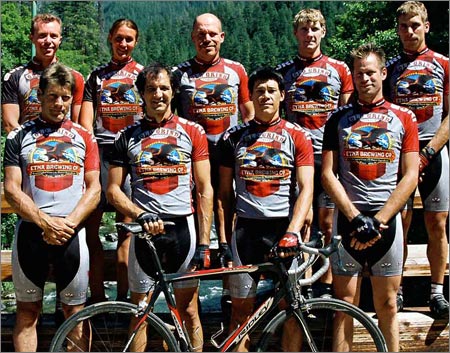 In 1972 he headed for the big stage – France. That winter, Neel teamed-up with track specialist and fellow American, (and some-time Eurosport pundit) Roger Young. The pair rode the amateur sixes in Belgium and Holland. On this circuit they made an Italian connection which saw Neel head south for the 1973 road season. Neel raced for the GS Siapa team over the following years, scoring several wins in Italy, he also rode for the US national squad.

In 1976, Neel returned to the States to seek selection for the Olympic team. Results in distant Europe meant little to the US selectors. Neel had to earn his place through the trials. Two wins out of four events booked his ticket north. But at Montreal it was Mount who made the headlines. Neel wasted no time in pondering ‘what ifs?’ after his crash. 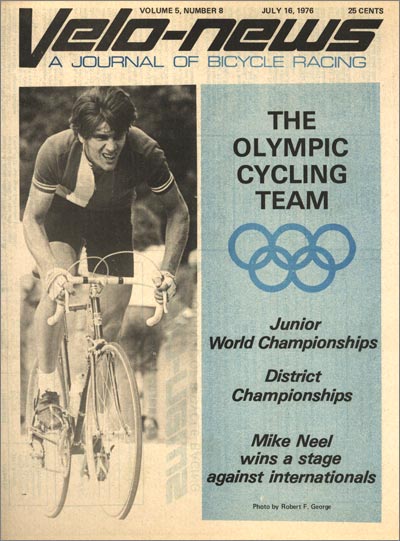 Whoa… 1976! The American presence has come a long way, baby!

Returning to Italy after the Olympics and recommended by squad member, Australian Gary Clively, the Californian immediately turned professional for mattress manufacturer, Magniflex. The World Championships that year were in Ostuni in the southern ‘heel’ of Italy on a rolling 36 kilometre circuit, covered eight times, 288 kilometres, around 180 miles.

The start sheet read like a ‘who’s who?’ of the generation’s finest riders, nine of the riders who lined up would be able to boast 12 world road championships between them by the time they retired – Merckx (3), Maertens (2), Gimondi, Moser, Raas, Kuiper, Hinault, Zoetemelk and the late Gerrie Kneteman – surely one of the finest fields ever assembled for the race.

The seven hours of torture began in warm sunshine, all of the 79 riders from the 14 nations competing had been worried about the searing central-Mediterranean heat but in the event the clouds rolled in and a cool breeze kept the temperature in the 60s.

For the first four laps Neel felt good, but as the big players came on stage and the speed built, fatigue began to set in. Coming virtually direct from the amateur ranks, where the early laps of a big event are invariably fastest he was unused to the relentless build-up of speed as the professional championship progressed.

Lap average speeds built from 37 kph to 39 to 43 to 44 as the hours passed. Apart from being able to ride his own race, the other advantage Neel had was the back-up he was receiving from the well organised Magniflex support staff.

Unlike the GB squad which arrived without musettes, the ladies’ team having to sew them from bed sheets and where Phil Edwards pulled into the pits to abandon, ranting that he had not been given a bottle for five laps, Neel received his feed every lap. A mussette containing a fresh bottle, well prepared race food and even a clean hat was thrust into his hand on every circuit without fail.

There was no way Neel could consider going away, the pace was too fast and he was cramping-up but he realised if he could get to finish with the bunch then in the mayhem of the sprint anything was possible. 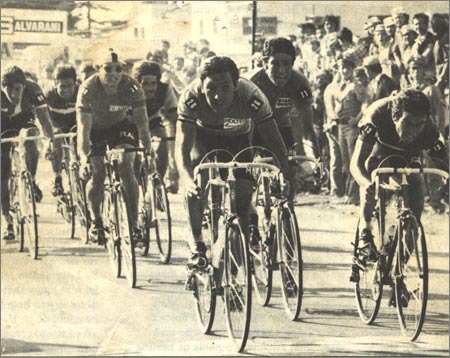 Mike Neel (far left) chases Merckx and Hinault to the line in at the 1976 Worlds.

Four men were clear in two groups of two as the finish approached. Race favourites Maertens and Moser would fight it out for the rainbow bands. Neel’s Magniflex team-mate Tino Conti and perennial Joop Zoetemelk would contest the bronze medal. The elegant Moser was no match for the battering ram power of Maertens and non-sprinter Zoetemelk was easy meat for Conti.

The build-up for the sprint for fifth place started some four kilometres out. Neel felt rough, but like all the best sprinters he ignored the cramp, fatigue and switching to battle for a good wheel. He latched on to Belgian hard-man Frans Verbeeck’s back wheel but was manoeuvred off it as Merckx arrived and told Verbeeck he wanted a lead out. Undeterred, Neel tried to grab Merckx’s wheel but Gimondi had the same idea and eased him off the wheel and into the wind.

The sprint was now in full flow and Neel, blind with pain, hung on as best he could. Merckx took the sprint narrowly from Hinault with Gimondi seventh, Raas eighth and Australian six-day man Don Allan ninth.

Neel was a brilliant tenth.

The Europeans were no longer super-men to be gazed at in awe in the glossy magazines. Big Mike had travelled to the lair of the beast and battled with honour. A door had opened and continental bike racing had changed forever.