PEZ’clusive: MTN-Qhubeka Readies For The Vuelta

Interview: As the Vuelta looms ever-closer PEZ speaks to a man whose team will be making history in the race as the first ever African squad to ride a Grand Tour. The Professional Continental team MTN-Qhubeka will start the Vuelta this coming Saturday and although they’ve already achieved a lot just by getting to the race, their expectations are still high.

Douglas Ryder is the Team Principal of Pro Continental team, MTN-Qhubeka p/b Samsung and here’s what he had to say on the eve of his team arriving on one of the three biggest stages there is in world cycling:

PEZ: I guess it’s only right your first Grand Tour should be the one closest to Africa and with those Moorish ties – a dream realised for you?
Yes it’s a dream come true, and it was a dream 10 years ago when we decided to focus on seeing what is possible with African cycling. So few people realise dreams and most people’s dreams are exactly that “dreams” that they never think will be possible to achieve. 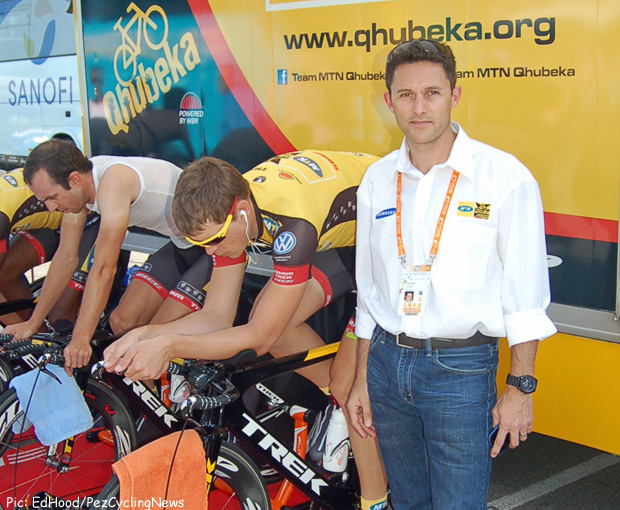 Douglas Ryder, the man behind MTN-Qhubeka

In the last five years we started to believe that it is possible to get an African team to the highest levels of world cycling. Now we are only one week away from our first Grand Tour and the first for an African registered team. We have been so busy preparing that we have not sat back and reflected on this incredible journey to get to this point.

Yesterday I was sitting with Louis Meintjes, Jay Thomson and Jaco Venter in Lucca and we were just staring at each other in silence. Then Louis said; “I cannot believe we are leaving on Tuesday to La Vuelta!” and we all started to speak about how we came to this point. 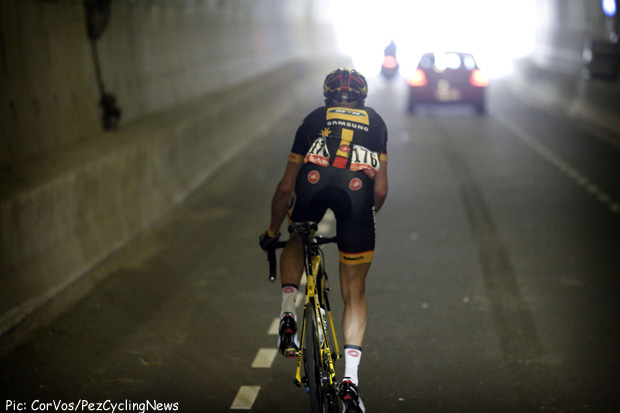 For me it has always been about the people and their buy-in to believing this is possible and not just laughing it off like so many did over the years. It started with an amazing partner in MTN who saw the potential and was willing to invest in the years of building up to this point. Then the riders needed to believe in it too, they needed to work hard, harder than they ever imagined and when they saw they could compete internationally then the door opened. And that drove me forward to put everything in place to make it happen.

PEZ: Can you tell us a little about the negotiations which took place to get you into the race?
Getting a wild card entry into a World Tour event is a bit of a lottery and it comes down to relationships, uniqueness of your team to the event organiser, what you can bring to the event in terms of fans and interest as well as what you will do in the race with the rider group you have.

I did meet with Unipublic to present our team to them and we highlighted our team’s performances over the last 18 months, the commitment from our sponsors for the sustainability of the project and our significant fan base that is really passionate about our riders and what we race for them. They liked what they saw and they liked that they could be the first Grand Tour to welcome the first ever African registered team as both the team and the race will be remembered for that. This is a unique opportunity for us and we need to make it count.

PEZ: It’s going to be a tough one, isn’t it – a Tour de France revenge match?
Yes, this Vuelta is becoming the Grand Tour with all the biggest contenders of the year in there. This is great for the race and I am super happy for them, they have put on an amazing event and to have most of the biggest names in world cycling on the start line is incredible.

It is also amazing for us as our team will be racing in an event that the worlds media will follow closely and that is great for African cycling exposure and for our #BicyclesChangeLives Qhubeka Foundation project. The more visibility and funds we can raise through this event the better for the future of mobility in Africa. (Ed: People can donate here)

PEZ: Who are your protected riders?
We will focus on the sprint stages with Gerald Ciolek and then on the GC with Sergio Pardilla but we have gone into the race with a four/five rider split – with four riders focusing on the flat stages and five riders on the hilly stages. We will animate the race in the first 10 days to see what level we are at and what could be possible.

PEZ: Your ambitions for the race?
We are aiming for stage wins and to be visible in the racing, we are focusing on certain stages that suit our rider group and in those stages you will see the team being very visible and then if all works out we should also end up with a good GC result.

PEZ: What can your fans expect from the team?
We will be very aggressive and make our presence felt in the race, we have worked so hard for this opportunity and we value this chance so we will try our utmost to make people proud of believing in us.

PEZ: The TTT to start – have you done any specific training for it?
Our riders have done some TT training during the year and also at our La Vuelta high altitude training camp but this is a discipline that we have not done that well in the past and so we will race hard to limit our losses.

PEZ: What was the biggest stage race the team rode, prior to this?
The Tour de Suisse in June this year was our biggest stage race to date. We had some bad luck as we were hoping for a stage win and a top 10 GC but ended with a 12th place on GC and lost two key riders to crashes. I hope that at La Vuelta the sun will shine on our backs and we won’t have the same misfortunes.

PEZ: What’s been the hi-lite of 2014 for you, so far?
Definitely the performances of our two star young riders Louis Meintjes and Merhawi Kudus. Louis’ fifth place and best young rider jersey at Giro del Trentino was an incredible performance when riders were fully prepared for the Giro d’Italia. 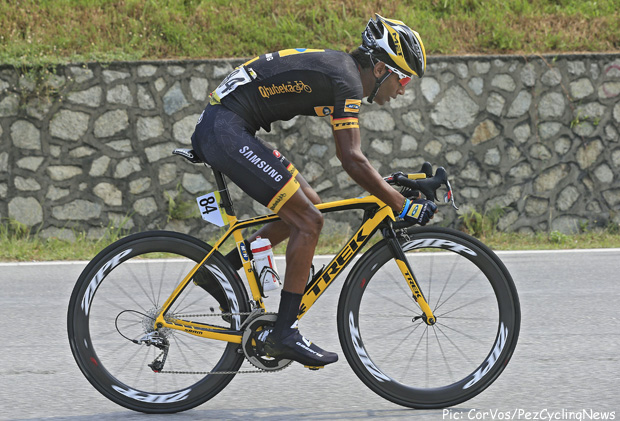 Merhawi Kudus – a rider to watch

Merhawi went fifth in Route du Sud and also won the best young rider jersey when riders were preparing for the Tour de France. These were huge performances from two young riders that have incredible futures ahead of them in cycling.

PEZ: How has the Qhubeka project progressed, this year?
This year Qhubeka has formalised a relationship with World Vision and kicked off a really impactful Bicycle Education Empowerment Program. Through this programme, in partnership with our implementation partner, World Vision, we provide bicycles to school children with the objectives of:

Increasing attendance and performance of vulnerable children in community and government schools; retaining more girls in school; improving teacher attendance and access to professional development activities; uplifting the livelihoods of bicycle beneficiaries and their families; improving safety and security of students travelling to and from school.

PEZ: Vuelta logistics – have you had to bring on extra mechanics/soigneurs?
We have brought in more contract mechanics and soigneurs as we are also racing other events during La Vuelta. We have made sure that our riders have all the support they need to be able to perform at their best.

PEZ: Your sponsors must be delighted at the team show casing in the Vuelta?
Yes they are and MTN is doing an amazing job in getting South Africa and Africa behind the team through targeting it’s over 200M subscribers and blog to get people behind the team. 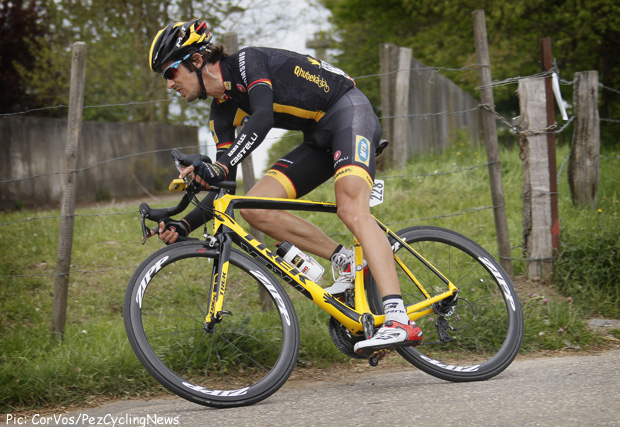 Jaco Venter is another exciting rider to watch in the squad

PEZ: Is the dream still an all African team in the Tour de France?
Yes but that is some years away, we have realised through this process that we need to increase the depth of African cycling to race at the highest level in the world. So we will start creating the African heroes on bikes that will drive the interest of cycling at the grass roots in communities in South Africa and other countries in Africa and this is where our work with Qhubeka is important.

Team Sky was not able to put a 100% British Team in the Tour yet nor Orica Greenedge a 100% Australian team and we are further behind these two countries when it comes to depth in cycling. We want African cycling and what we are doing to be sustainable so it is important we build the talent first and we believe right now the best way of doing that is to get more Qhubeka Buffalo bikes into Africa and get more people cycling first.

Our international riders have proven how invaluable experience and mentorship is in cycling. Their involvement in the team has fast tracked us forward.

PEZ: Is the World Tour on a wish list, somewhere?
Yes, it would be amazing to have an African registered team in all the World Tour events in cycling. We hope to get to that level in the coming years.

PEZ: Douglas Ryder will be a happy man at the end of the 2014 Vuelta, if . . .
We have shown the character that got us to this point on the bike by our riders and that we have given everything to get the results we set out to achieve. If we get beaten then we were beaten by better riders but we’ll have give everything possible to win a stage.