Rider Interview: A hair style and a moustache might be your trade mark, but there is much more to Mitch Docker as his 14 years in the pro peloton attest. Ed Hood caught up with the now podcaster to hear about his career and life now back ‘Down Under’. 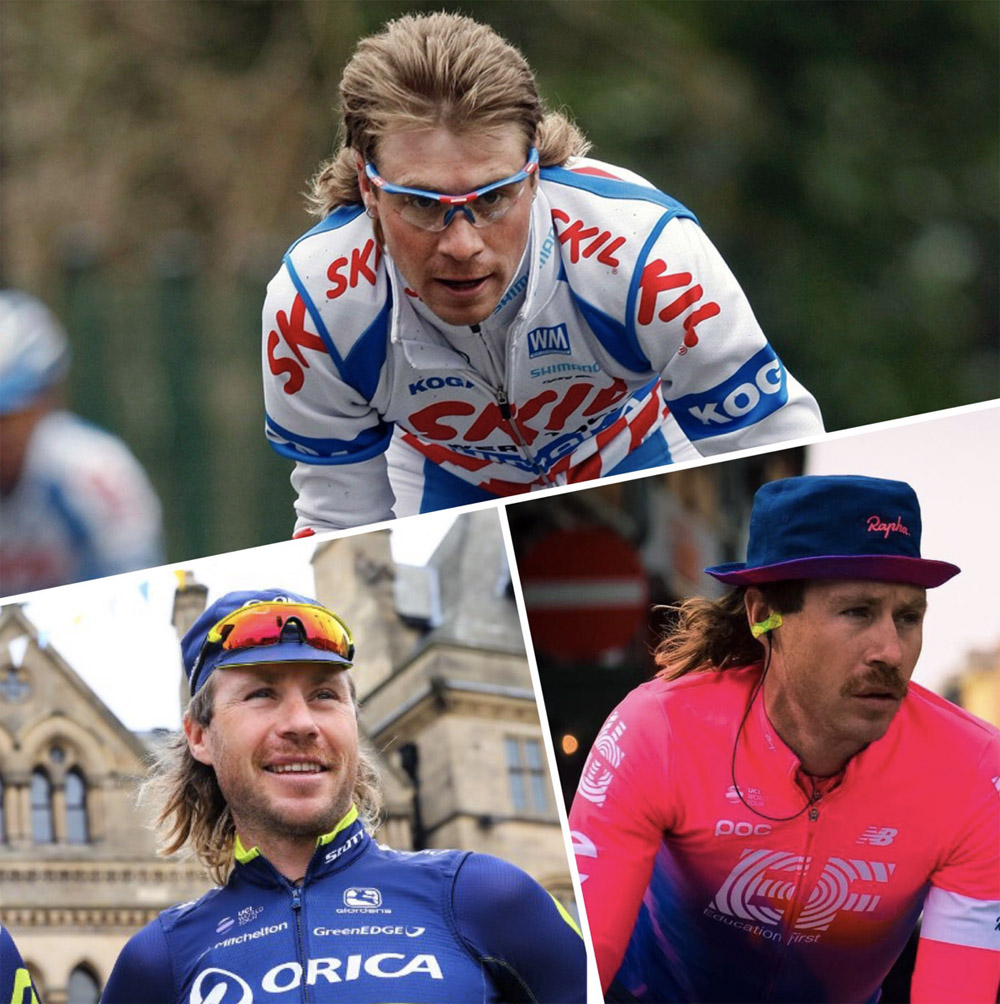 A selection of Docker styles

I owe this interview to my dog, Seoras. On the weekends I take him for big walks and have started listening to podcasts as we enjoy The Fife Coastal Path and the mighty River Forth.

My favourite listen is, ‘Life in the Peloton’ hosted by the man with the mullet, ‘tache and natty choice in head wear – Mitch Docker. I go way back with Mitch, to June 2010 when I interviewed him after his stage win in the UCi 2.1 Delta Zeeland Tour in the Netherlands. He was a Skil Shimano man back then but moved on to GreenEDGE in 2012; with his final team being EF who he was with from 2018 until he closed out his career at the end of last year, in Paris-Roubaix. I thought I should catch up with Mitch and ask about his new career as a ‘podcaster,’ but also run back over his early years too.

PEZ: You were a track man originally, with a win in the legendary Bendigo madison back in Oz but you didn’t pursue a track career?
Mitch Docker: In Australia you ride both road and track, the 2008 Worlds in Majorca was my last serious campaign on the track, I could see there was no future in it for me. 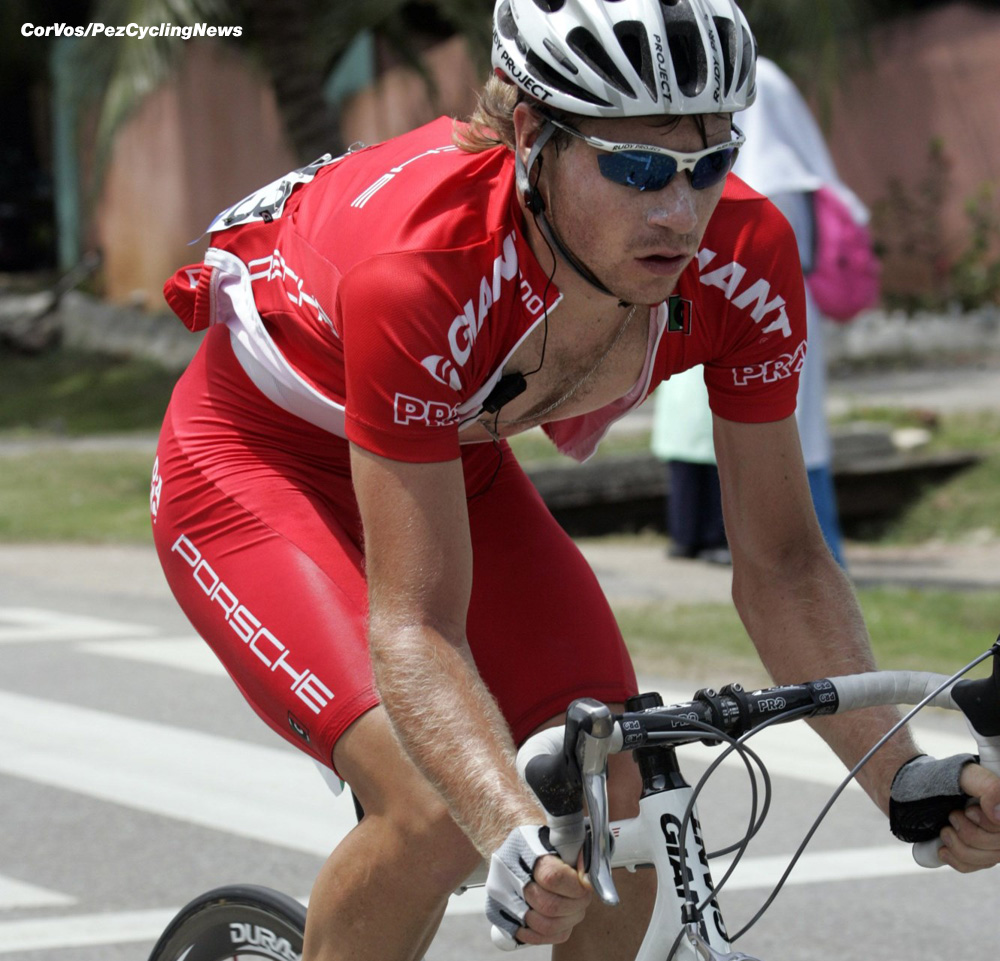 PEZ: You were in the Aussie junior team pursuit squad which went all the way to the Worlds final – but you didn’t get to ride the final, that must have been a heartbreaker?
It was a heartbreak and it would have been an easy point to turn away from the sport – no final, no medal. But it actually made me more determined to succeed, it was probably the best thing that could have happened to me at that time.

PEZ: Your first pro team was Drapac in Australia; that sounded like a great little team.
It was a really good team, it started with three riders the first year, then six riders the following year and in the third year we went Pro Conti. The philosophy of the team was to produce well rounded human beings with a good education, not just bike riders. It was an alternative to having to go and live in Italy and fight to get a team. I went to university during that time and would do the things you do at uni – get drunk on a Friday night but still race on the Saturday.

PEZ: Skil Shimano – how did the contract come about?
The idea behind Drapac was that they would eventually push riders up in to the professional ranks. We rode the Tour of Qatar and got our asses kicked but I shone a little in the race and whilst I never won big I was consistent with some nice results like second on a Tour de l’Avenir stage and second on a Tour de Langkawi stage where I finished top 10 on GC. The first pro year was hard, I was getting kickings in all my races, I said to my DS, the former Dutch Professional Road Race Champion, Rudi Kemna; ‘why did you sign me, Rudi?’ He replied; ‘I’m not sure!’ That wasn’t the answer I wanted to hear but in my second year I won that Zeeland Tour stage and then one in the Route du Sud, Rudi said to me; ‘that’s why we signed you!’ But that’s what pro bike racing is about, serving your time in a harsh environment, learning the ropes. 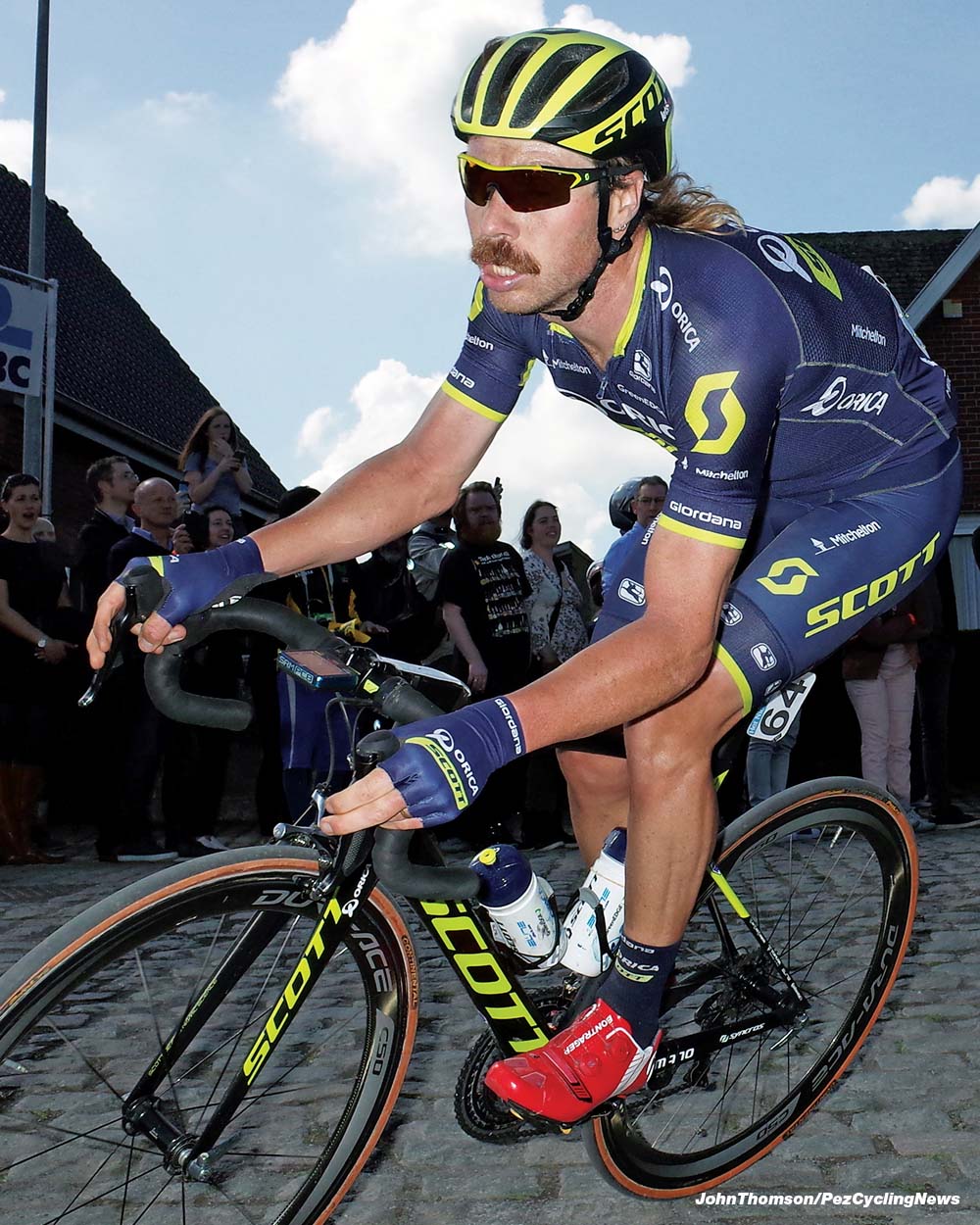 PEZ: GreenEDGE, an Aussie team, that must have been cool?
It was great for a number of reasons, it was an Aussie team with Aussie culture, it was World Tour and I was team mates with guys who were my idols, Stuey O’Grady, Robbie McEwen, Baden Cooke. . . I was there for six years but then didn’t get offered a contract renewal because the team was changing direction, they signed Matteo Trentin – and perhaps I’d become complacent? It was another of those times when it was probably the best thing that could have happened to me – a wake up call!

PEZ: Then EF, the team’s easy vibe looked made for you?
It was a similar vibe to early GreenEDGE, I could be myself, it was a breath of fresh air. 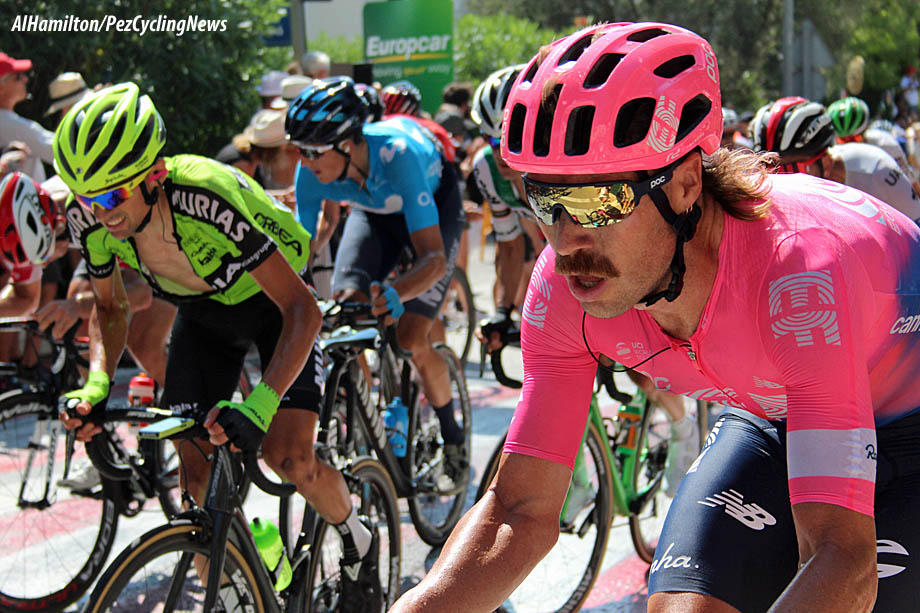 PEZ: You ended your career there – at Paris-Roubaix.
I had two kids by then and wanted to get back to Australia to live. I had thought about ending my career after Paris-Roubaix in April but ending your career mid-season didn’t seem right, so when the race was re-scheduled for October it was perfect. But of course, I had to get selected for the race and it was a bitch because I broke my elbow at the Benelux Tour, three weeks before Roubaix and had to work hard to get selected. But when I was in the race I didn’t want to be there, I had a crash early and was scared, I had a bad crash in Roubaix in 2016 and know the effects that crashing on the cobbles can have on you. I soldiered on to Arenberg where there some guys from my fan club and they gave me a lift to the finish. It was a good way to end, in a car with my fans having a beer with them, a celebration – not coming in to the velodrome an hour down or in some other team’s car, full of misery.

PEZ: It strikes me that with your nature that you’d be ideal DS material?
I love working with people, that’s true but the DS role entails being away from home and family for extended periods and that’s not something I want to do. There are couple of young guys I’m mentoring over here and I’m enjoying the experience. 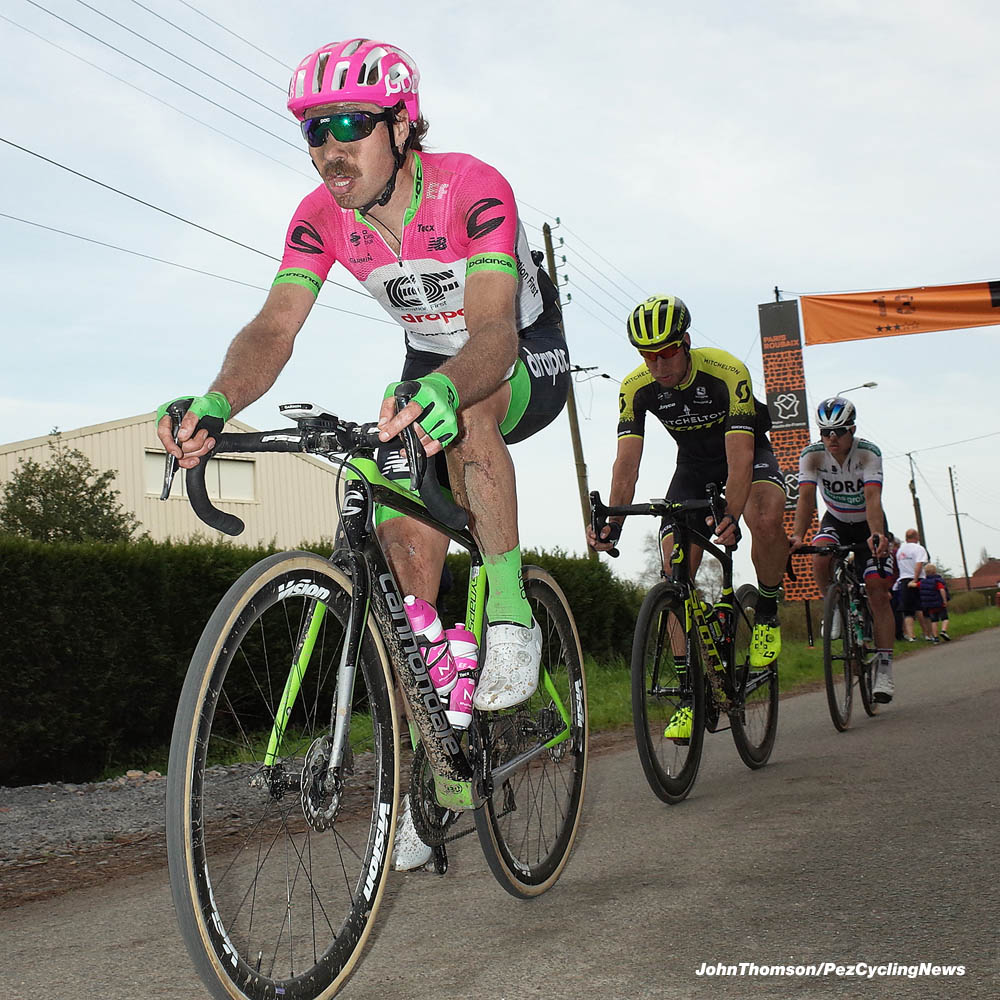 PEZ: You’ve gone back to Oz after your career ended, I thought you were well settled in Girona?
I had 14 years in Europe and it was a great time but I’m an Aussie through and through, I like to want to wander in to a pub and chat to the barman about nothing for a while – I can’t do that in Belgium or Spain. I have three kids now and I want them to grow up in Australia, around their grandparents – and I want to have a cold beer with my dad now and again.

PEZ: Final question on your career – the ride you’re most proud of?
Paris-Roubaix 2011 when I was in the break and sprinting for a top 10 spot – I finished 15th and always tried to live up to that performance, it drove me. 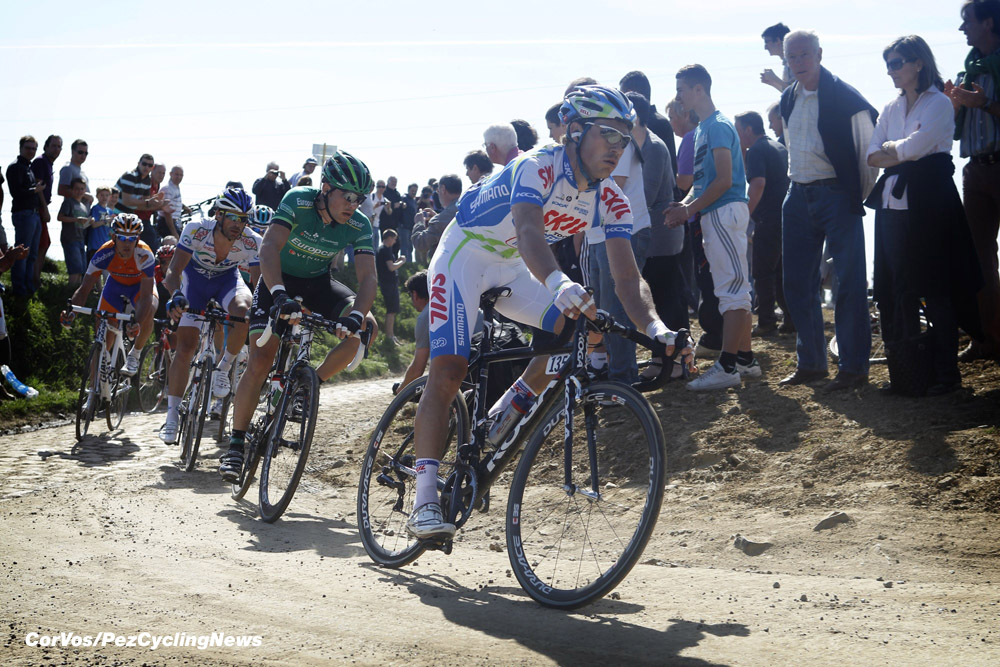 PEZ: Podcasts?
When I’d come back to Australia people would always ask me about the pro peloton and what it was all about. I thought it would be good to start the podcasts so folks could gain an understanding of what it was all about. To start with they were pretty average but have morphed into where they are now.

PEZ: Has anyone ever knocked you back for a podcast chat request?
Sometimes, support staff in particular don’t want to be in the limelight, they’d rather stay in the background. And you do get folks who lead you on, tell you they’ll come on and let you down. . . 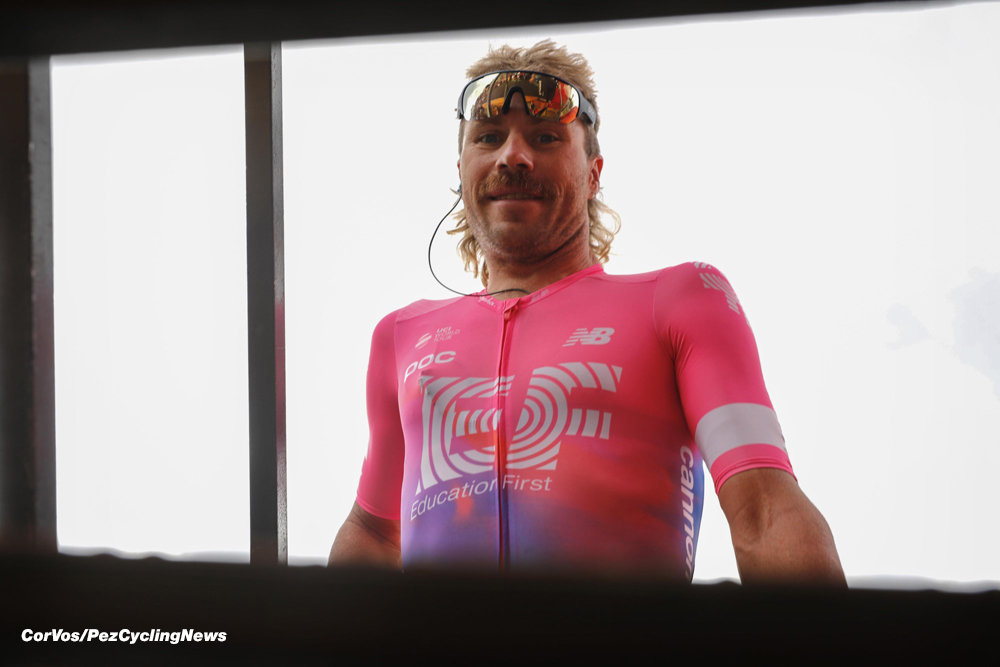 PEZ: Who would you like to have on the podcast but haven’t yet – Lance perhaps?
Tom Boonen, that’s a hero kind of thing, I messaged him but he never got back to me. I messaged Lance but never got a reply, he’s not someone that I’d particularly think of but I guess everyone thinks about him.

PEZ: Regrets?
There are heaps of things where you think, I should have done this, or that but I think that worrying like that shortens your career. You have to be happy in the peloton if you want a long career – I had 13 years in the European pro peloton and have no regrets about my time at all. 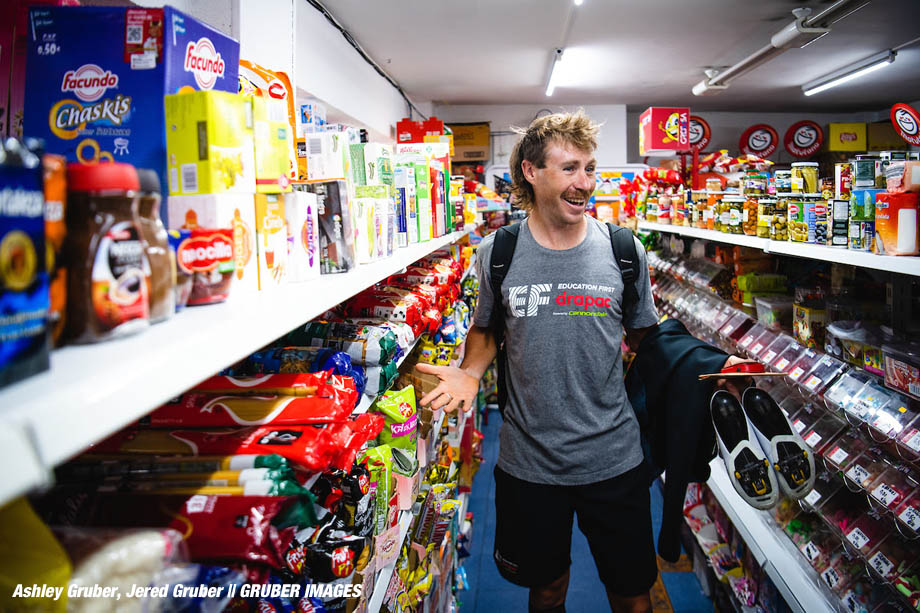 PEZ: And the latest podcast, Mitch?
It’s with my former EF team mate, Joe Dombrowski of the USA, he’s with Astana now. He won the Baby Giro in 2012 and won a stage in the Giro, last year – he’s an articulate and interesting guy, well worth a listen. . .

# You can sign-up for the Mitch’s podcast ‘Life in the Peloton’ HERE and if you’d like to read one of the very first interviews with Mr. Dombrowski, from way back in 2011, check it out HERE # 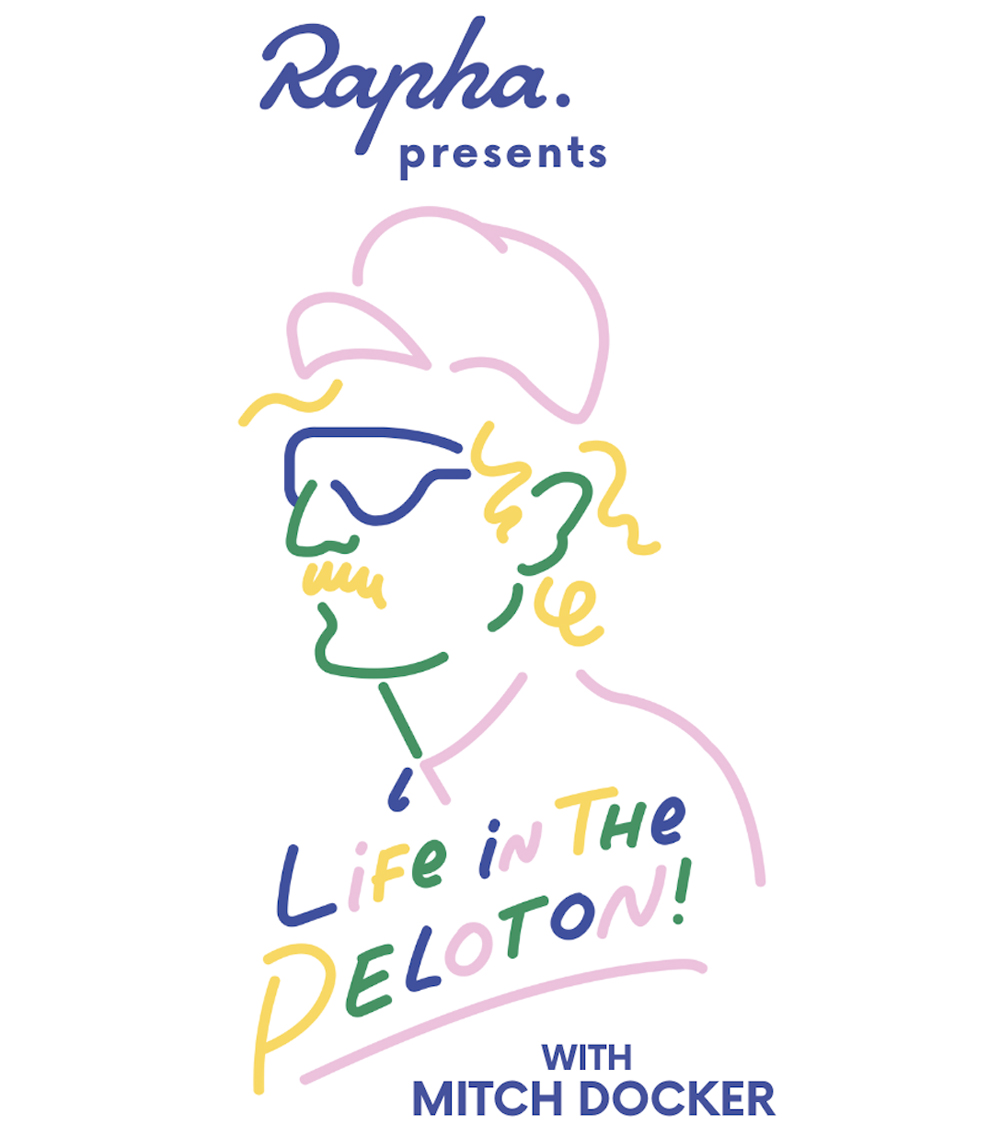