As with any Worlds, there’s plenty of talk about how the course will play into the final outcome, so we asked some guys way more qualified than us journos (like the riders) about the parcours. Fast Freddy Rodriguez was chillin’ at his home in Girona on Tuesday, when my call made it through…

PEZ: Have you seen the course or had a chance to ride it yet? What is your sense of how the parcours will affect the race – there’s no shortage of opinions…

Fred: I’m still at home, but I saw the last stage of the Vuelta and saw what it’ll be like… Like any one day race, anything can happen… depends on who’s gonna try to control it… and like the World Championships – everybody wants to win, so if you want to win, you’re gonna wait until the last part of the race. 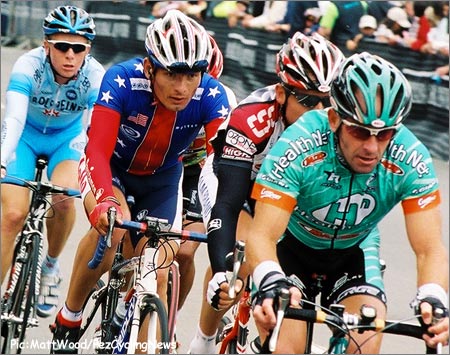 Fred battled a cold at the Barclays SFGP, but is confident his form is back for the Worlds.

It’s gonna be a tight race – if a Bettini, or even a Valverde can get away with a couple of laps to go, it could be 50/50 that they’ll stay away, but if not, it’ll be a sprint.

PEZ:There’s been a lot of talk that the course is favoring sprinters, Petacchis, McEwens, Boonens, if that plays out, do you see it creating an opportunity for a break to upset the proceedings?

And that’s gonna give enough of a chance for Petacchi’s team and the sprinters’ teams to try to keep it together, so there is a small chance someone could get away, but chances are probably not.

PEZ: The US team isn’t listed as one of the favorites against the Italians and Belgians – does that present any opportunities for you guys?

Fred: On a course like this, I’m probably our best chance for results, so if it does come down to a sprint, and I’m still there, I’ll be ready to fight it out. We’ve got guys like Bobby Julich, who can try to break away, but they’re not one-day riders, so given the course, chances are it’s not gonna work… I think our cards are kinda based on me right now…

But when we get together with the team and the coach we’ll talk strategy.

PEZ: How are you feeling – how are the legs?

Fred: I probably haven’t had the best preparation coming into this… I got sick in San Francisco – I got a cold before the race and during the race it got worse. I’ve been fighting that, and then I went to Poland and succeeded in getting some miles in my legs and not getting sick.

I think with the form I have I should be there for the finale. 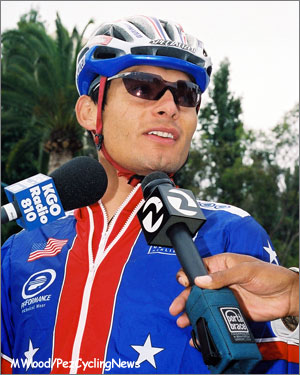 From Stars & Stripes to Rainbows…? It could happen Sunday.

PEZ:There’s a lot of talk about the last corner – it’s a 180 degrees around 500 meters from the line.

Fred:I think the biggest gamble in this race will be the last corner. It’s gonna be a field of a hundred athletes coming into that last corner, probably 50 guys think they can win. In a World Championships, when you throw in a corner like that – basically a u-turn – all it takes is the leaders to go out wide, and someone to come in too hot, and it’s game over…

Putting a corner like that in the last 500 meters… is a very stupid mistake. It’s not gonna make it a true sprint, it’ll be who got through the corner the right way. The last day of the Vuelta in Madrid when Petacchi won, everyone coming out of the corner was over geared – they almost came to a dead stop. They could have done a better job with that last corner – they could have put it on the downhill – it would have been a great finish there…

PEZ: Favorites – who are you picking as the guys to beat – you’ve mentioned Petacchi, Bettini, Valverde…

Fred: Actually, the guy for that kind of finish is Robbie (McEwen). That last corner is made for Robbie, ‘cuz he’s probably the most explosive guy of all the sprinters. Petacchi, Boonen, myself, we’re good at high speeds – Robbie’s the only guy that’s really good at coming out of a pocket, and shooting out… If he’s within shooting distance of the line, there’s nobody that can accelerate as fast as he can… I’d put my cads on Robbie if he’s in the first 5 guys out of that corner… And if I’m there I’ll be a contender myself – it all depends on that corner.

We’re gonna have over 260km in our legs – that’s a long day it’s gonna make difference, especially for a guy like Petacchi.

PEZ: Thanks Fred – and good luck!

Hmm – a 260+ km race that gets decided in the last 500 meters? That last corner should be a barn-burner any way you slice it – so stay tuned as we talk to more riders and follow the action from World’s week.