Quintana’s Tour Preview: The 2018 Tour de France starts on the French coast on Saturday the 7th of July and the teams are wound up for the big ‘Grand Depart’. The Movistar team is starting with three leaders, Nairo Quintana. Alejandro Valverde and Mikel Landa. We have the first of a three-part series with Blues’ big names for the ‘Grande Boucle’. 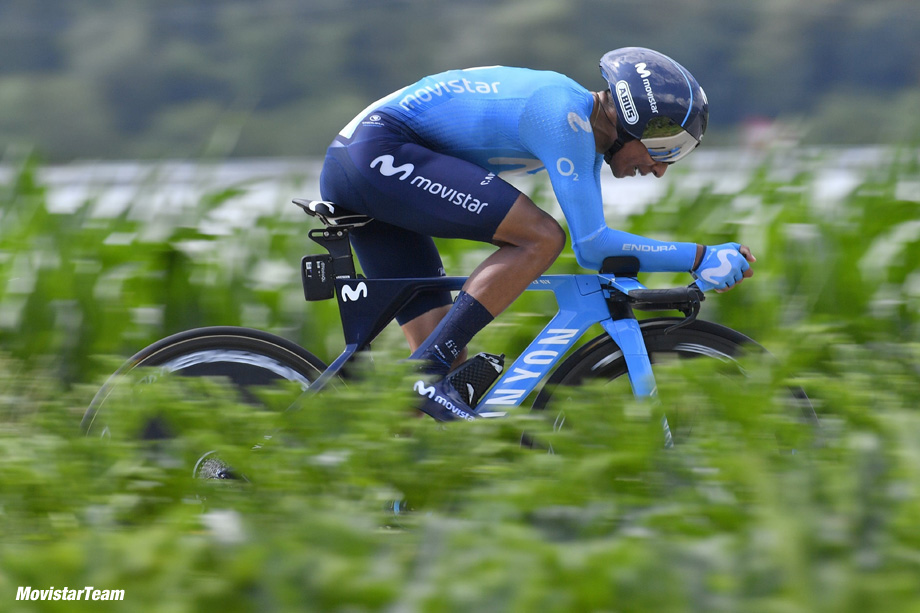 The first interview is with Colombian Movistar leader Nairo Quintana. The interview is translated from videos taken by the Movistar team.

The 2018 Season:
Nairo Quintana: “It’s been a bit different for me so far this season, more calm. We’ve fared well in all four stageraces I took part in. It was 2nd in Colombia and Catalunya, the latter won with Alejandro; 5th in País Vasco, where we also got to the podium with Mikel; and 3rd in the Tour de Suisse, claiming a stage victory. We’ve tackled those races in a bit more relaxed way, even helping out our team-mates at some of them, trying to build our form slowly but steadily before the biggest goal of the season.”

Preparations for the Tour:
“After País Vasco, I headed back to Colombia to train in altitude, just like I do every time I have to get ready for a Grand Tour. Before my return to Europe for the Tour de Suisse I took on long rides, tried to simulate the conditions of some TDF stages — we really focused our efforts this year on tackling the longer climbs and also improving our consistency on time trials. The main goal was to reach Tour time with fresher legs; in previous seasons, we had come to the start after bigger efforts, going full-gas on many week-long stageraces. We’ve also done some good racing before the Tour this year, but we did reduce our racing load, travels back and forth to those competitions… That should all help me get to this race fresher and in better morale.” 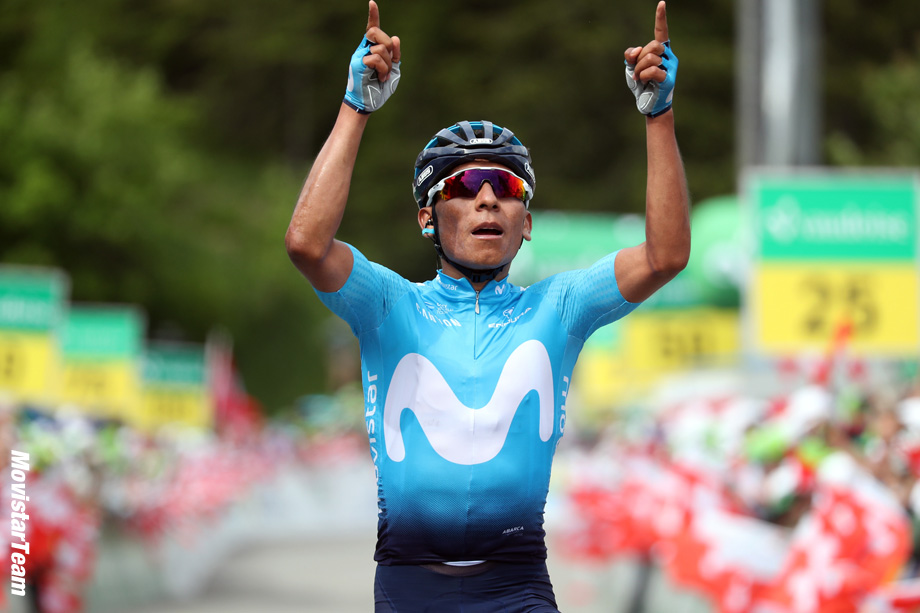 Goal:
“Our goal is winning the Tour. It’s the Grand Tour I’m still missing in palmarès, one that I’ve always dreamt of. We’ve got a great team. Let’s hope we can get safely through the first few days, working together as we’ve always done, and hopefully best our rivals for the victory.”

Rivals:
“Froome and Team Sky are the number one contenders for this race, that’s obvious. After them, there are some riders who stand a big chance, especially if they get through the pavé stage unscathed. We’ve already seen Nibali taking advantage of such cobbled stageraces when he won the Tour four years ago. Then there’s another kind of riders more or less similar to each other, with some stronger or weaker points but quite alike, names likes Porte, Bardet… Plus, we’ve got to see how Roglic tackles the race, how’s his form, and it he’s able to confirm what he’s shown this year. To those names we’ll have to add or replace some during the race itself.”

Team and Leader Cohabitation:
“It’s important to have such a strong team. We’ve got riders who are able to excel in all terrains. It’s probably the best squad I’ve had by my side for a Grand Tour. We’ve got to remain together, work hard – that’s the way we can become the perfect team. Mikel, Alejandro and me – well, we’ve already shared leadership roles in this season and in the past, and it’s gone well for us. We got on well with each other and we haven’t gone through any real troubles. As the race develops, the scenario for us should get clearer. Let’s see how our forces stand after the pavé stage – it would be phenomenal for us to have got through that stage with all three in a great position. We’re three and we’ve got to take advantage of that strength in numbers to chase the victory.” 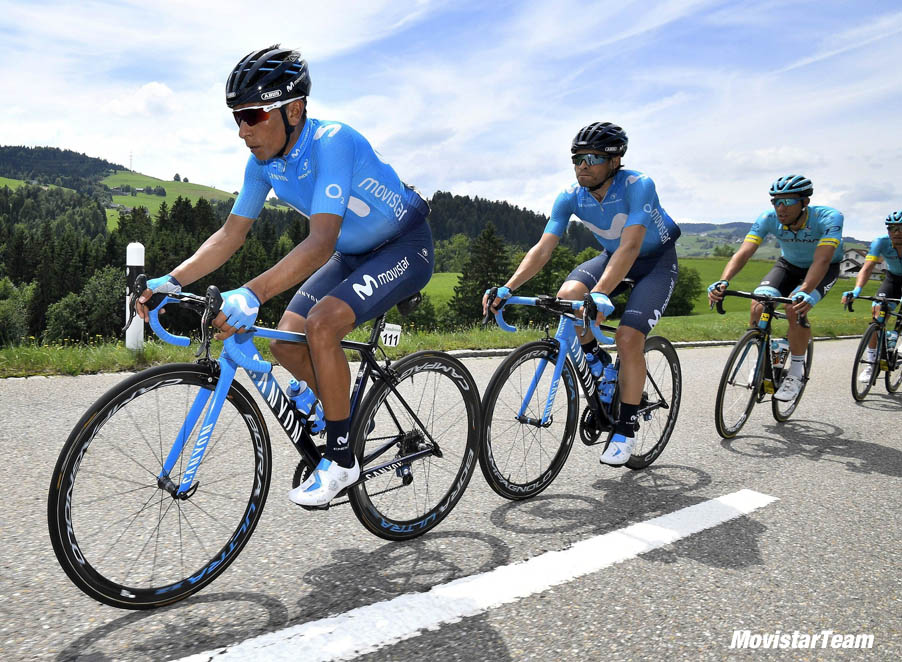 Team Preview:
“Imanol Erviti knows well how to stay focused at crucial days, and is very polyvalent. It’s a really, really valuable team-mate for us, especially on the flat. Bennati really has great knowledge of this race and cycling itself, as well as loads of experience in those difficult stages we’ll have to face, those with crosswinds or cobblestones. He’s got great skills to position himself into the bunch and lead us out into a good place. José Joaquín Rojas also navigates well through such stages, and being a more explosive rider, as a former sprinter, as well as an experienced like helps us a lot. Then there’s some strong riders, such as Andrey Amador and Marc Soler, who can do well in both the flat and the mountains. From Valverde I value highly his great experience, which helps you remain calm, and the enormous respect he’s got inside the peloton. That really plays in our favour. Mikel Landa has progressed well through his career, he wants to take the world of cycling by storm and I’m sure things will go great for him in this Tour.” 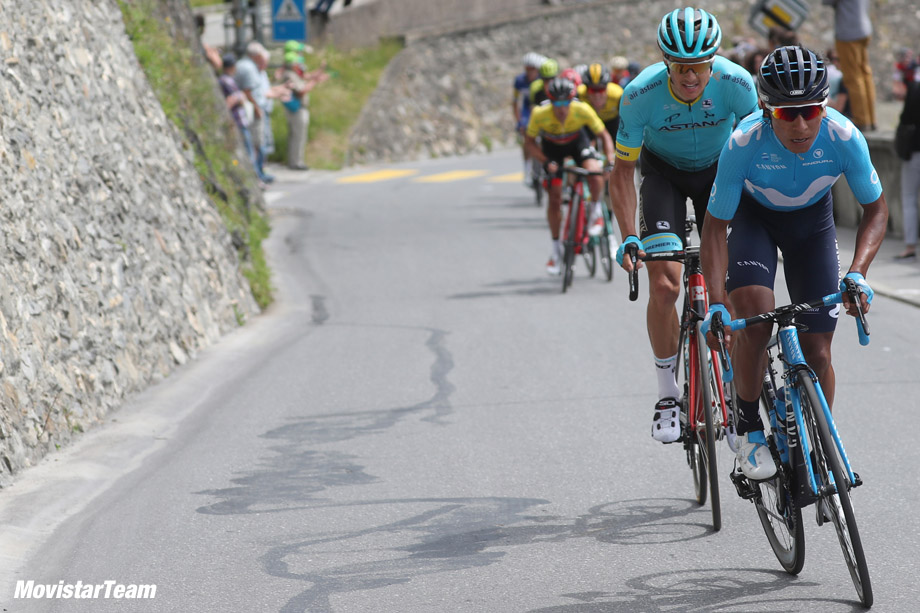 Route:
“The first week is one which instills respect, but it’s all the same for everyone. There’s no better or worse rider for such terrain before stage nine, because it’s mainly about good or bad luck. You can struggle, you can suffer from misfortune, but it’s all the same for all competitors. We already saw how Froome was sent home by a crash in 2014, and Contador also falling down and leaving the race few days later. We know the Tour could come down to such things this year, making you withdrawing or maybe losing much time and having to rekindle your goals for the remainder of the Tour.

“The second half of the Tour – for those climbers who have got safely through week one and have good legs – could be good for us, because it’s all big mountains. The strategy will be important, because there will be riders with lost time and things to prove. For any team trying to defend themselves from a leading position it will be harder, because we’re all one man down from previous editions.

“I’ve been able to inspect almost all important stages – I’ve ridden all Alps and Pyrenees stages as well as the ITT on the penultimate day. It’s a difficult Tour, a hard route, where the most important thing will be staying safe and lucky on the first half and strong on the second.” 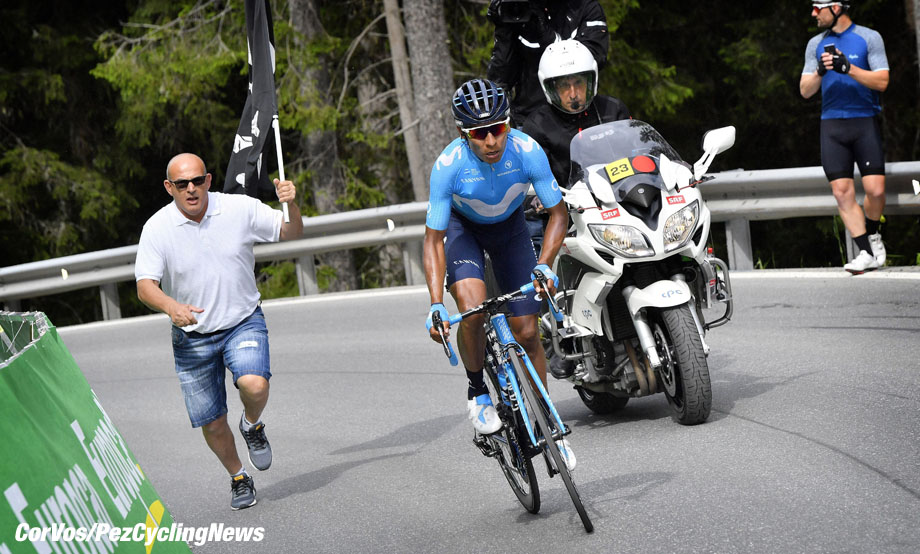 What it means for him:
“For me, it’s the most important race in the world. It’s a dream I have from some years ago, when we realized we could win it. We’ve been close a few times, and we keep working hard to make that yellow dream come true.”

The first Tour:
“I remember well my first Tour, which started from Corsica. I had already completed my first Vuelta a España a year before, but the field of competitors I saw at the start that year was incredible. I couldn’t believe there could be so many talented riders, and I was worried because it was my first time there. It was aggressive, fast racing – but as days went by, all of that happened: winning a stage, finishing on the podium. Those are some of the best memories from my career.” 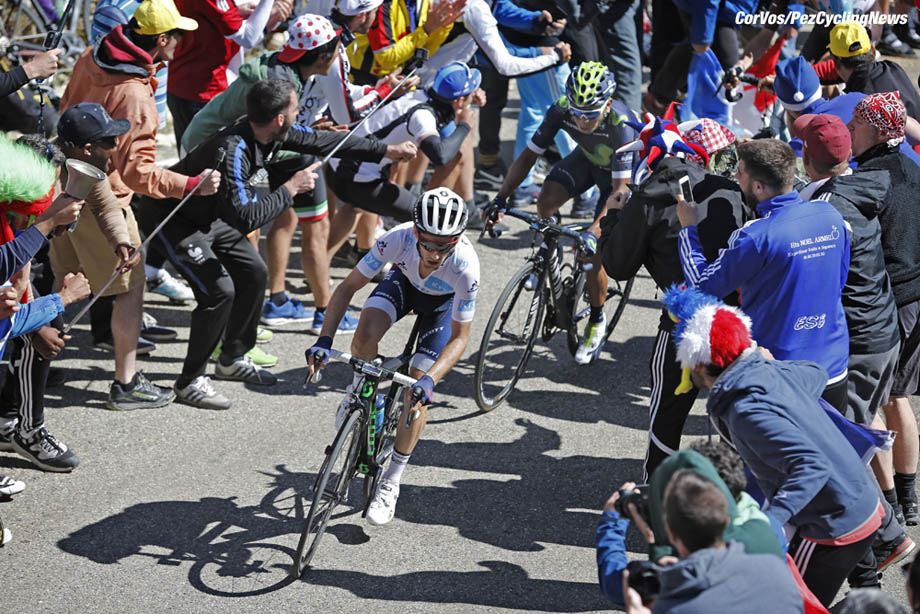 Mont Ventoux 2013:
“It was one of the most difficult days for me. Pure agony, yet a good taste for me, because I was building on what would end up being a second place overall in the Tour. I knew there that the effort had been worth it.”

Annecy / Semnoz:
“I just cried like a little child at the top of the climb. I was shaking as I was heading to the press conference. I didn’t know what to say, what to do, I was overwhelmed by the emotions. I knew that my life had changed that day.” 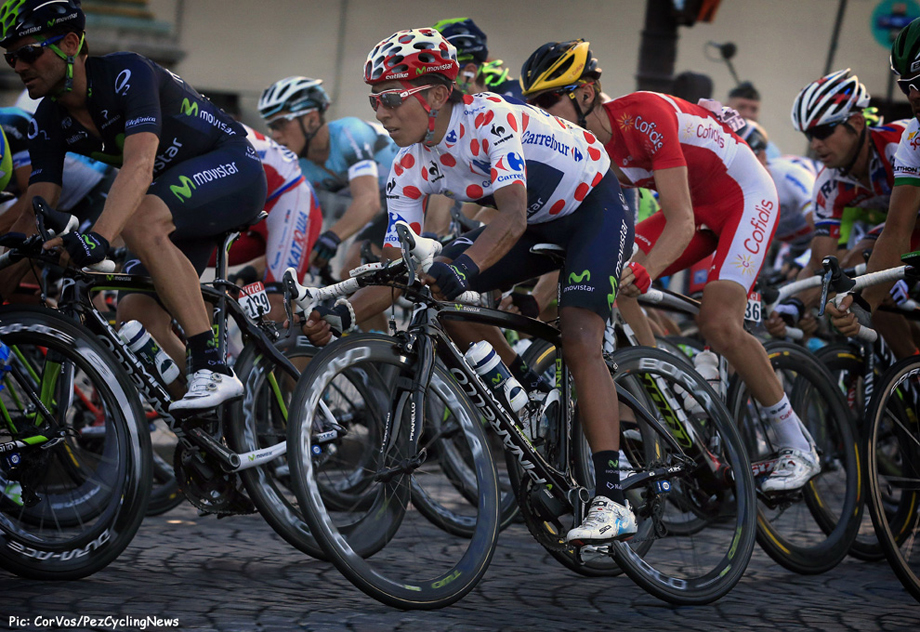 Champs-Élysées 2013:
“I enjoyed it much, but wasn’t ready for such emotions and it makes you a bit confused inside, but it was still really beautiful.”

Alpe d’Huez 2015:
“It was all-in, an attack where we put all of our energy to play, together with the rest of the team. We came close to overall success, but we had lost time during the first week and we paid that price. That’s life – at least, we finished very proud of our efforts, happy about the whole team, and I got back to the Paris podium.” 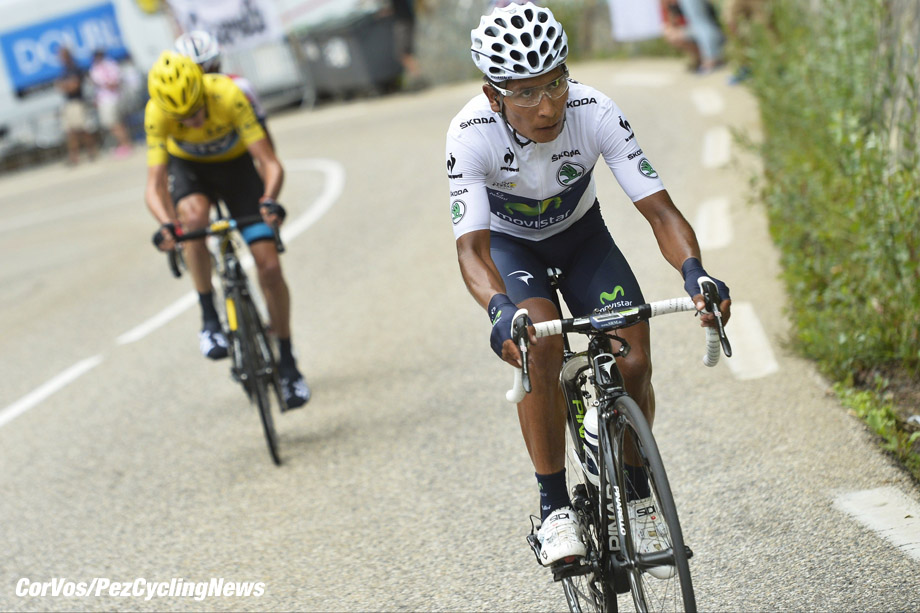 Bad moments:
“You’re always able extract something positive from those bad moments. When you’ve got good legs, you feel like you can do everything and even some more, but when you’re going through rough moments, you reflect on what you’ve done in the past and put on a more courageous ride. You see situations from a different point of view, and it helps you plan differently, change your strategy and become more confident about what you can get when you’re in good condition.”