You gotta love the Aussies – they love to talk and don’t hold back. Our scheduled “short chat” with Navigator’s Tour de Beauce winner Nathan O’Neill quickly became an enthralling discussion about all things racing, with the. Here’s part 1…

Tour De Beauce And This Season
PEZ: Congratulations on your Tour de Beauce win! That was an overall impressive ride…

Nathan O’Neill: I was a bit surprised myself, I’ve been feeling a bit sick. I had a head cold the week before, up in Philly. I wasn’t too sure about my chances to be honest. I had completely blocked sinuses and nose…

PEZ: I’ve heard that Beauce is one of the most difficult races in North America, agree?

O’Neill: Normally it is really difficult, but this year was really ridiculous. Rain and wind – 4 of 6 days of the race were in rain – atrocious. It is one of the tougher if not the toughest races around, what with the hills and the tough roads – there are no flat roads, just constantly up and down. I did it last year and had memories of it being a lot of gutter action – and it definitely was the same this year.

PEZ: The TT (which Nathan won by nearly a minute) was particularly impressive – what do you attribute to your amazing TT abilities? Do you do a lot of specific training for it? Has it always been this way?.

O’Neill: I guess I’m gifted a little bit, look at anyone in Europe who can TT well – all of the guys are all physically capable, some guys can, some guys can’t. Some of it is mental, the ability to focus for long times. I’ve been fortunate enough since the beginning, because I did lots of training when I was younger by myself. A lot of times, I guess you could say my training was like one big, long time trial. I never used to ride in groups. I got very used to feeling my own body and getting a good idea of how I’m feeling, as well as a good idea of how much I can spend and how much I have left. 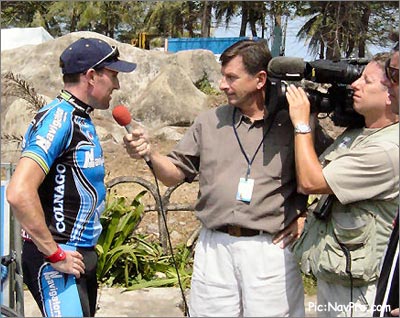 Glamorous Life: You know you’ve made it when Paul Sherwen wants to talk to you!

PEZ: What would you consider the decisive moment in your win at Beauce?

O’Neill: Essentially, the TT was a big chunk of it – I pulled up 6 seconds short though, pulled back 98% of it, but Sven Tuft (Team Symmetrics) still had the lead. I had to pull back at least six seconds to draw level with him. The second to last stage was a circuit of a 12 km lap, about 8 miles, there was a short 1 mile hill at the finish, steep at the bottom, leveled at the top. I attacked on the very last lap on the steep part of hill, in my big chainring – everyone else was in their little ring – I put 18 seconds into him in about a mile. Part A was the TT, and Part B was that day. It was actually really good, as I didn’t have to rely on my team to do any work until the very last day, and that’s what you want – as little work for your team as possible. I couldn’t gamble on taking the lead on the final day though, it was just too risky, so it was do or die on that day. I had nothing to lose.

TOUR DE GEORGIA
PEZ: Moving on to another big race for you this year, the Tour de Georgia – you were 8th overall (first non-ProTour rider) in an incredible race – what are your thoughts on the TdG?

O’Neill: Well, I’m getting good at races in extreme weather – GA was pretty awful too, lots of rain. 8th sounds somewhat less than impressive, but when you consider the company I was in, it really put it into perspective. I was really motivated for it, because essentially, it’s my home race. My wife has such a big part in the organization, we eat and breathed the Tour de Georgia, so I had all of the incentive in the world. I dug a bit deeper than a lot of the other guys. I wasn’t going as well at Georgia as I am right now. Motivation had a lot to do with it for me.

…And you’ve definitely “made it” when your wife is worthy of our Daily Distractions!

PEZ: How about those infamous mountain stages?

O’Neill The stages could have been – 90 percent of them I believe – 75 percent of the distance and gotten the same result – the length of the stages just prolonged the agony – really long and difficult stages. I know the roads very well though, which was an advantage for me. It’s really hard to suffer when you don’t know what’s around the next bend. The race is definitely tough, and certainly rivals any Euro stage race in terms of difficulty.

LOVE THE TEAM
PEZ: Your Navigators team seems to be really coming around right now after an impressive Tour de Beauce not just from you, but from the whole squad – and then Baldwin’s win at US Nats – is there anything different right now, or is the ball just rolling your way?

O’Neill: We’re definitely hitting our stride a little bit, it took awhile to get going, but now it’s good. The difference has been that we were split into so many different groups at the beginning of the season. It was difficult to bond and get a team chemistry going. Working in similar groups for several months now, and the guys know each other’s capabilities a lot more, and are comfortable with each other.

PEZ: What else is on the agenda for you for the rest of the season? Any big goals?

The next big thing is Cascade – next week. Head straight from there to the Tour of China. After China, it really depends on how everyone feels…China is a really difficult race, some could be finishing their season right there, whether they bounce back for San Francisco remains to be seen. We’ll be taking a wait and see approach. 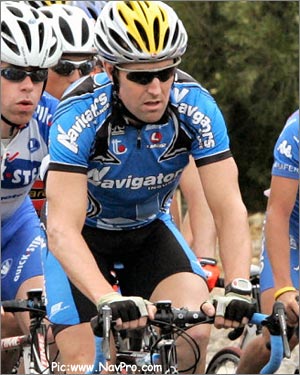 O’Neill gets rolling at the ’05 Jacob’s
Creek Tour Down Under.

PEZ: How do you like the Navigators program of racing in Europe for most of the first part of the season?

O’Neill: I don’t mind it. Belgium is not really my cup of tea. We did some stuff in Italy though, and there’s more talk on going back there. It works really well – makes it really interesting, we don’t see any US riders until the Tour de Georgia, and it’s an interesting venue to test the legs out. Europe is ok just as long as we don’t kill ourselves and dig too deep. It worked out well this year, but last season didn’t go so well.

PEZ: Would you consider racing in Europe again?

O’Neill: I would. It would have to be the right opportunity though. My idea of the right opportunity has changed now that I’ve been married and settled down here. I’d have to chew on it and see… You know, there is a possibility, I could be lured back, but it would be all about the right team, and the financial side would come into play as well, as it would be a big investment to pack everything up and move back to Europe.

STORIES
PEZ: What would you say has been your biggest achievement in cycling?

O’Neill: If I were Lance Armstrong, I’d say, winning the Tour 6 times. For me, I haven’t done anything HUGE like that. I’m proud of a few things: I was an Olympian in 2000, 8th in 2001 in World TT Championships. Actually, now I would have to say Winning the Tour de Beauce last week, given the conditions we had to go through were pretty ridiculous. I’m a pretty modest guy to be quite frank. I’m just happy to be doing what I’m doing. I would just say look at my resume, it speaks for itself.

PEZ: There’s definitely a LOT there.

O’Neill: Yeah, hopefully there’s some more room on there so we can add some new notches to the resume. Actually, on second thought, there’s plenty of room there.

PEZ: I’m pretty partial to Northeast Georgia, because I live there, but it was definitely a surprise to find out that you had moved to Braselton, and even more surprised to see you on some WBL’s. What brought you to GA?

O’Neill: My wife is a native Atlantan, born and raised here – she had an opportunity to return to Atlanta at the end of 2003 to keep working for the Tour de Georgia, so we bought a house near Gainesville in 2004. It’s a great place, I love the climate, and the training around here is great. The mountains are a bit too far away for my liking, but I can still get in a pretty good workout. My climbing has suffered a wee bit because of that, but it comes back when I get into the mountains.

Actually, the terrain here is a lot like Beauce – always up and down. I actually think it’s one of the better places in America for riding a bike – people just don’t know about it. You know, there are the meccas – Boulder, San Diego, Northern California, Napa, everyone knows about those places. North Georgia is great though, there are so many roads here, traffic is not an issue. The variety is fantastic.

PEZ: Do you still spend a good bit of time in Australia?

O’Neill: Unfortunately no, getting less and less each year. Not too worried about it though, my wife and I talk about moving down there when I hang my wheels up. I do get down there about four weeks a year to see my parents and friends though. 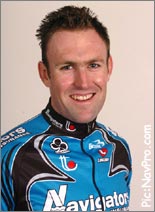 PEZ: Speaking of hanging the wheels up, has the thought of retirement come up?

O’Neill: No, no. I hope you’ll be calling to interview me for the next 10 years. As long as I’m performing well, I definitely see myself racing for at least the next 8 years. The body isn’t under as much stress in America as it is in Europe, if I were in Europe, I would say that I would have another 4-5 years, but here, I figure it’s about double that. I’m enjoying it so much more in America. I feel like I’ve had new life breathed into me every year – reinvented.

EUROPE VS AMERICA
PEZ: You raced for Panaria before coming to America – you’ve seen racing from both sides of the pond – what do you see as the main differences?

O’Neill: Well, obviously, in Europe you get to do the BIG stuff – Milan-San Remo, the Vuelta, Zurich, Lombardy, the Giro – big cool races. You race against the BEST guys, and there are cool places to train. The Downside – really difficult, if you suffer any kind of injury, sickness – it’s hard to comeback because everyone is constantly going well. It’s a Catch-22 – you can’t finish the race, but you need to finish the race to get form.

In America, the level is not quite as high, but you can still ride yourself into as good of form as in Europe – you can nurse yourself back to form after an interruption. There is just so much less stress from the press, team, and fans. It’s much more enjoyable.

Get more info at the Team Navigator’s website: www.NavPro.com