Rider Interview: Young Neilson Powless looks to be the next graduate of the Axeon Hagens Berman Development team. Ed Hood managed to have a few words with the man who has battled with the best in the Amgen Tour of California and won a stage of the Tour de l’Avenir. 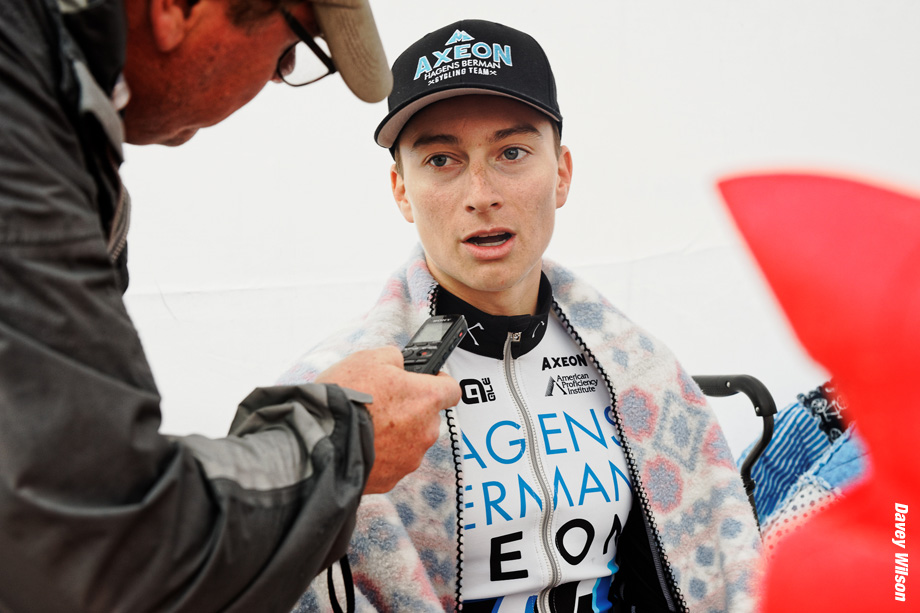 The most improved rider in US Cycling in 2016? Has to be 20 year-old Californian, Neilson Powless a member of Axel Merckx’s Axeon Hagens Berman Development team. From being a solid rider with potential in 2015 he’s in a place where he can win the ‘Queen stage’ of the 2016 Tour de l’Avenir.

PEZ: You were a triathlete originally, Neilson?
Neilson Powless: My parents were professional triathletes so they got my sister and me into the sport naturally. It was all just about keeping it fun. My parents started a triathlon team so the two of us could have a group of kids to travel around with and race. I think it was a really great way to be diverse at a young age. I think it has also kept me from injury nowadays because I find it much easier to switch equipment. I am not too picky. The strength and durability it gives your body as a whole is really beneficial. 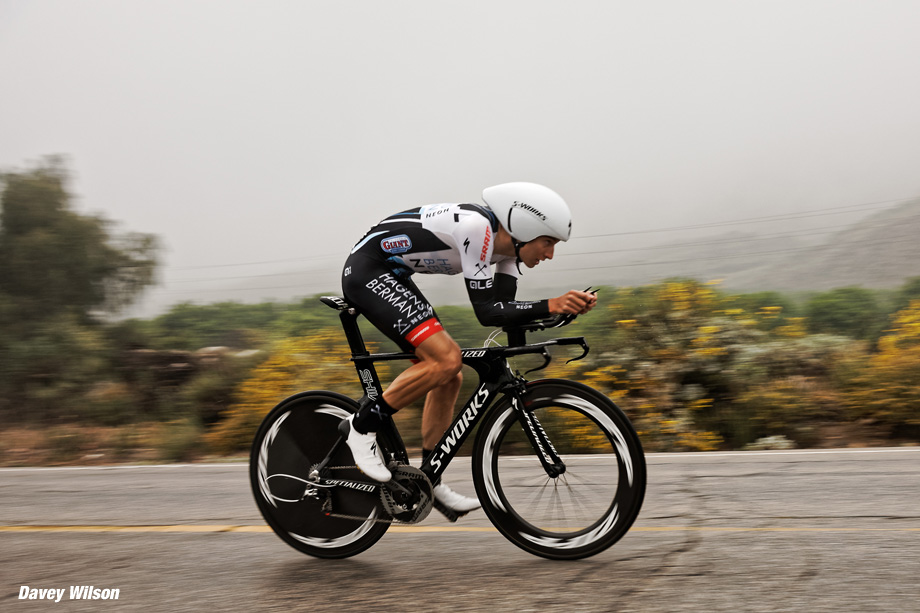 PEZ: Then a mountain biker?
I sort of followed my sister, Shayna, in that route. She was a mountain biker first. I saw her in Europe, racing World Cups, and I was getting kind of jealous. So I decided to give it a try. I raced mountain bikes for my two junior years, when I was 17 and 18 years of age. It was fun racing the World Cup circuit. I finished it off with a seventh place at the World Championships in Norway.

PEZ: Winter 2015/16, did you do anything differently?
I spent a good amount of time in Lake Tahoe before team camp last year. I did some altitude training up there. Mentally, it was pretty grueling. It wasn’t bad during it but looking back on it, I thought it was pretty crazy that I put myself through that. I figure I will be putting myself through that in many more years to come. So it was good to get a little taste of it. I would ride the trainer when I was up there because it was so snowy up there. Every second or third day, I would drive down two hours to a lower elevation to get some intensity. That always helped.

Plus, Todd Herriott – who is my coach – and I would talk every day about how I was feeling and if I was ready to take a step up in training while staying focused on my body. 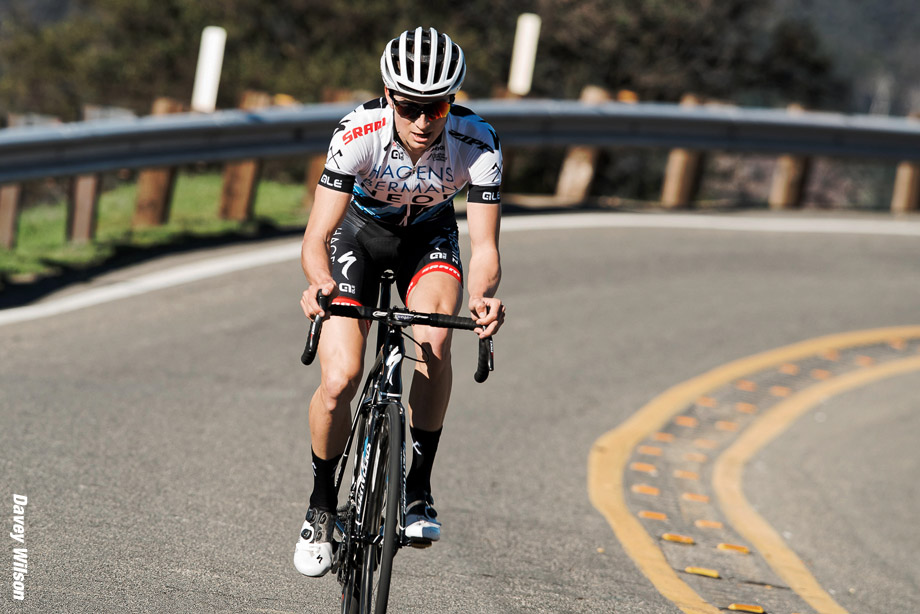 PEZ: You hit the ground running in 2016 – strong results in San Dimas, Redlands, Joe Martin, Gila. . .
To everyone else, it was sort of a breakout season for me. But for me and my coach, Todd Herriott, it was confirmation of all the work I put in the years before and through the winter.

PEZ: What do you put that improvement down to?
Because I was on a team where anyone could be the leader any day, I had the mindset and extra push to really do well in a time trial or maybe an uphill finish – just to show that I could be a possibility as a leader as well. On this team, anyone can be a leader at any race we go to. The team is strong as a whole – that is how it is. So with that comes everybody wanting to get a result. But at the end of the day, everyone was willing to sell out for whoever is the team leader at that race. So that was really awesome to watch and be a part of. 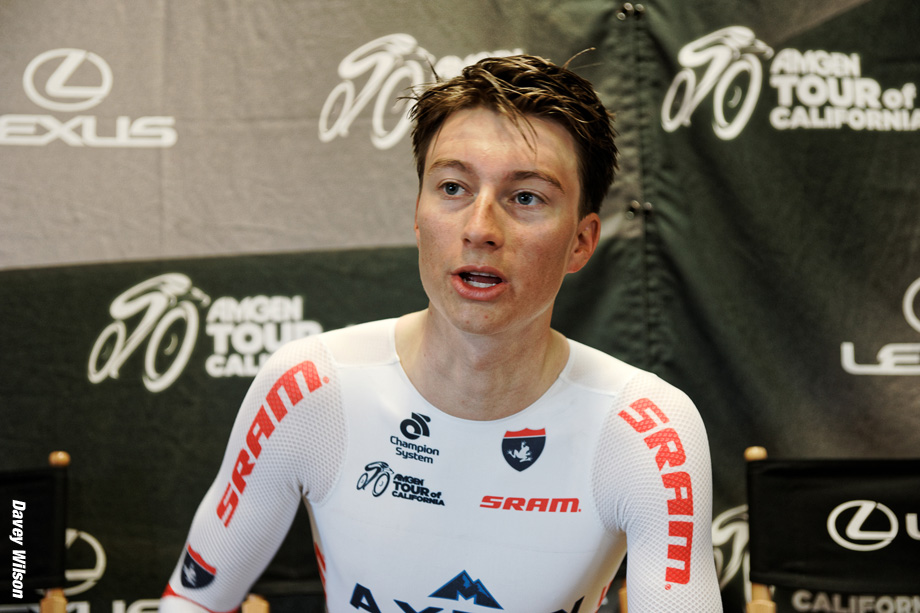 PEZ: California, fifth on the Queen Stage after a solo breakaway – what did that change of levels feel like?
I thought it was really awesome to be out front for that long that day. But looking back on it, I would have maybe waited longer and tried to go for an even better result. But at the end of the day, it got me a lot of publicity which was really good. It got my name out there. Maybe if I had finished fourth, people might not have known I finished fourth until a day or two later or when they saw the results. So even though I got fifth – which was one or two spots lower than I might have achieved – I think it was beneficial because no one had heard of me before. It kind of forced the TV commentators to talk about me more because I was on the TV camera a lot longer. For sure, looking back on it now, from this point forward I am going to be a bit smarter about how I tackle uphill finishes like that. I want to make sure I race them in the way I get me up the mountain fastest rather than get me up the mountain with a lot of publicity.

PEZ: The L’Avenir stage win, tell us about it.
That was an amazing day. I was with two Colombian teammates about 10 kilometers from the finish on the Col de la Croix de Fer when I attacked. I was feeling pretty good about soloing to the finish. But just after the one-kilometer-to-go arch, I thought for sure I wasn’t going to make it. The gap was at 15 seconds and my legs were hurting so hard that I could not even pedal around one of the switchback corners. I looked back with 800 meters to go and saw an Australian guy coming up on me but fortunately, I didn’t cramp up from there. It was quite the feeling to put my arms up and win such a tough stage. 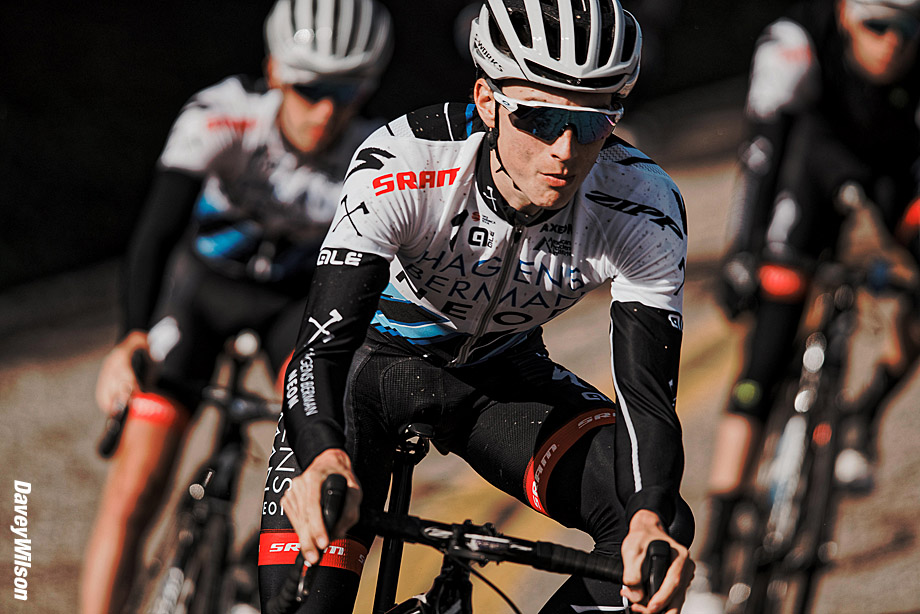 PEZ: You must have been getting tired by the time the Olympia Tour came round?
Before the Tour of Utah was the hardest part of the season for me. It was my third altitude acclimation block prior to Utah. I spent most of my attitude blocks on my own because I am on my own schedule and the team is always shifting or on its own schedule. So it was easier and cheaper to be at my cabin in Pollock Pines, California, or at a friend’s cabin that was empty. So I did not have as structured of a mid-season break as I would have liked.

That’s one of the things my coach and I are going to do better this year. I tried to take a mid-season break after California but then I had to go to the Tour de Beauce. Then I got sick after Beauce and still had to keep trying to go through to Nationals, which was the week after Beauce. So even after Nationals, my mid-season break was only four days off the bike because I had to start getting ready for Utah. So my break was sort of scattered across a three-week period while still trying to race. That was difficult and something I can do better with this year. The lead-in to Utah was really rough. My training was not going super. I was trying, but I just could not produce the power that I was hoping to do leading into Europe. But it turned out fine because Adrien (Costa) was flying. We had an incredible Utah. He got a crazy, awesome result and the race as a whole was a great success. (Costa won the best young rider and mountains classments and was second on GC, ed.) Utah was still good to kick me into gear for l’Avenir. 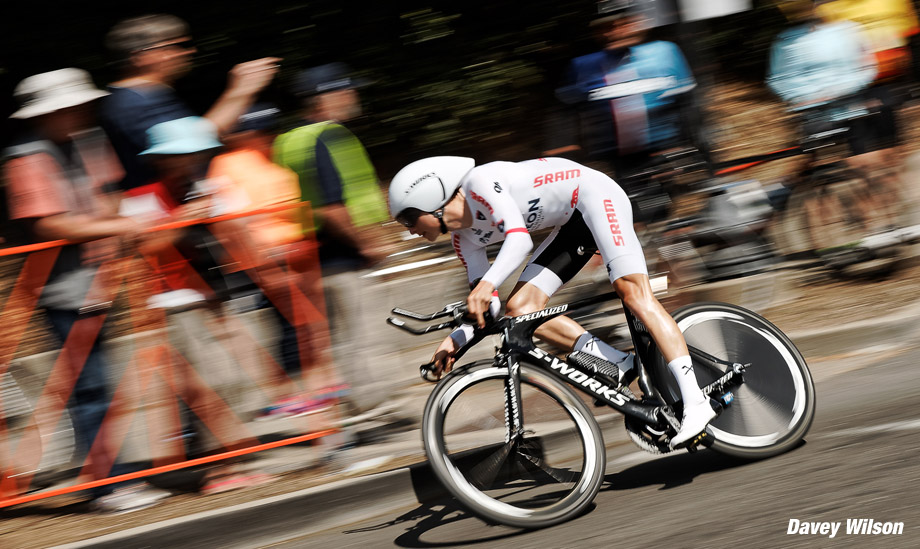 PEZ: Any disappointments in 2016?
The Tour of California was a big highlight for me. But it was also one of my biggest disappointments. I dropped four places on general classification when I got caught up in a crash on the last day in Sacramento. Without that time lost, I would have finished fifth. That is definitely viewed a lot differently than finishing ninth. But either way, I still took home the best young rider jersey.

PEZ: What’s the situation with coaching for you?
As I said earlier, Todd Herriott is my coach. He’s a former pro who was the first American to win the Tour of Cuba back in the early 2000s. He and I talk about every day and he has been a huge help to me the past few years. 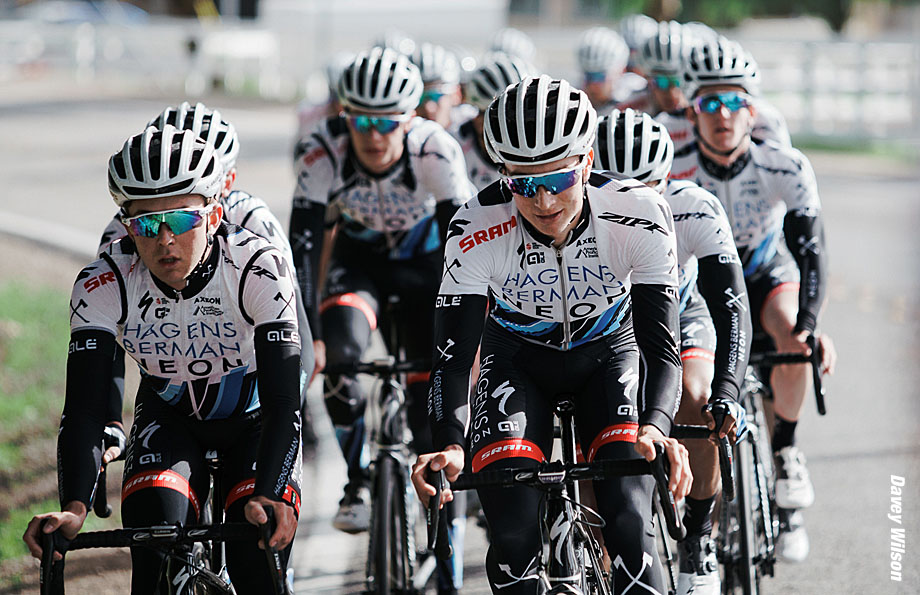 PEZ: How was training camp for 2017?
Team camp in Calabasas, California, was a real refresher for me. It was a chance to get back in the swing of things. Whether it was training or doing media appearances, it got the routine going again. The eight new guys we have on the team are great and getting new bikes and new kits always makes its feel like Christmas. The weather the first half of camp was a bit wet, but the sun was out for the rest of camp.

PEZ: How’s the program for 2017 looking?
It is not 100 percent laid out, but in talking to the directors, at least for the spring, I start out at Volta ao Alentejo in Portugal (where he finished 27th on GC, ed.) Two years ago, I did that race in support of Alexey Vermeulen and TJ Eisenhart on the national team. So I am super excited to be back there. Then I have about a three-week break until Gent-Wevelgem. Then it is pretty much racing every weekend in Europe through to the Tour de Bretagne, depending on whether we get into the Amgen Tour of California. (The team found out yesterday (Thursday) that they will not be riding the Tour of California). 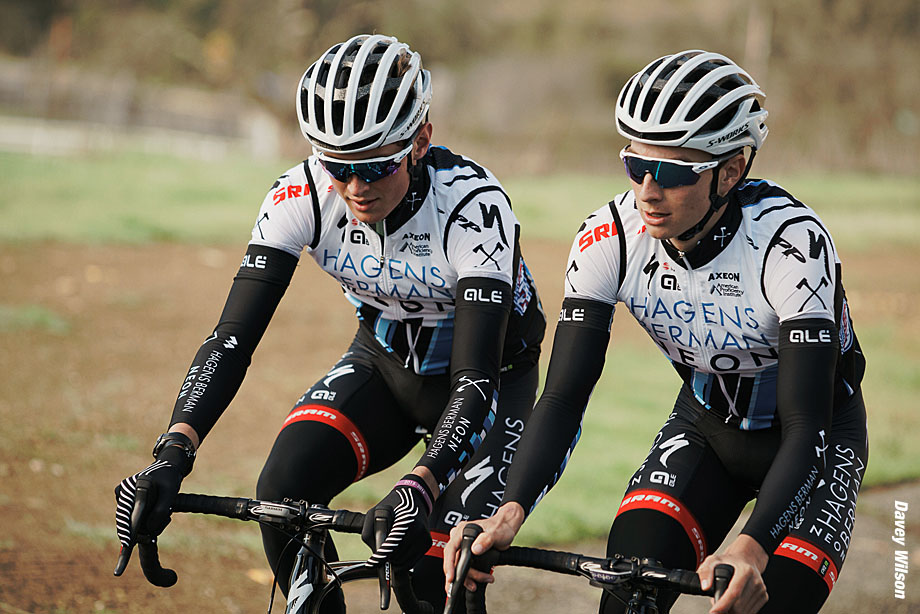 PEZ: And 2017 is about. . .
Growth. I think getting the race days in Europe is big because I am still lacking in that. It is something that my coach and my directors here and with USA Cycling think is really important. I want to be able to race with a consistent intensity. In America, some of the races are hard in specific points but not as intense as in Europe where you have crappy weather, a lot more riders, smaller roads and more guys always going for it.

# PEZ looks forward to seeing Nelson’s results as the season progresses, with thanks again to Sean Weide. # 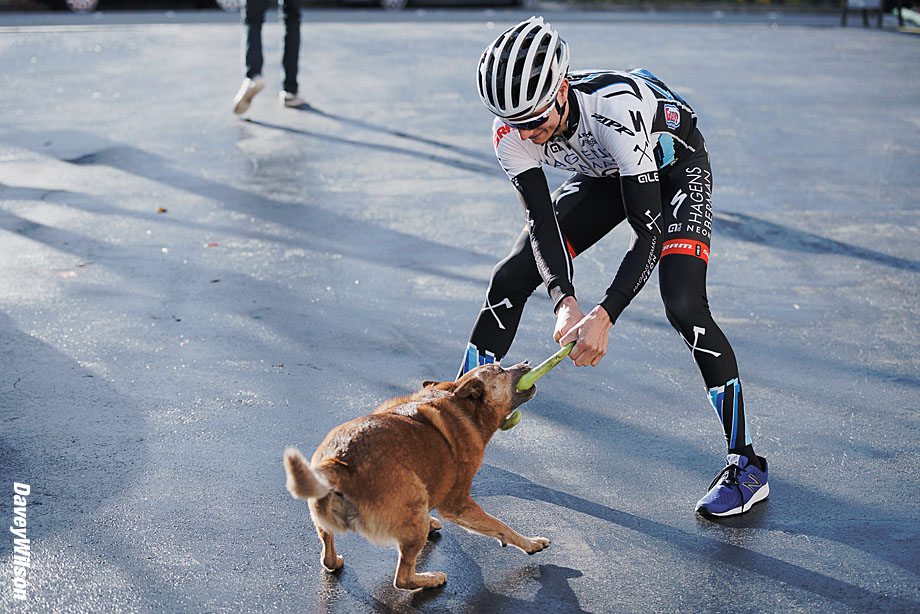