New Zealand/Dutch Star of the 70s, Tino Tabak Gets PEZ’d!

70s Star Rider Interview: In the 70s there were a few riders from ‘Down Under’. Australians were not so rare, but New Zealanders? No. Tino Tabak was born in Holland, but was brought up a Kiwi; he returned to The Netherlands to build a pro career to be proud of. Ed Hood found out more. 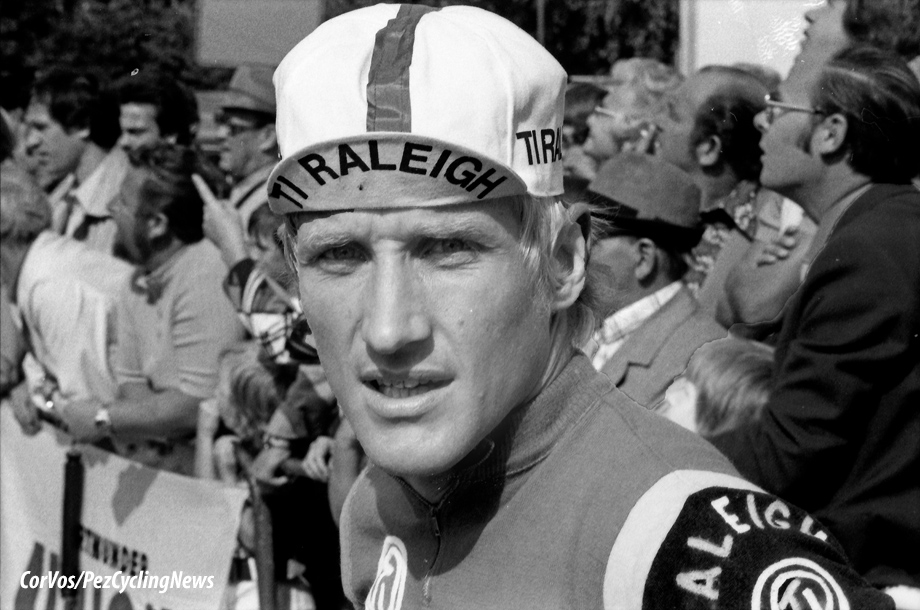 Strongman of the 70s

Kiwi’s in the peloton are no rarity these days; George Bennett, Shane Archbold, Paddy Bevin, Jack Bauer are all well-known figures on the WorldTour. But the spiritual God Father of these men whilst as Kiwi as they come was actually born in The Netherlands. He won everything there was to win in New Zealand including the National Road Race Championship – the senior event whilst a junior – moved back to the land of his birth and won the National Professional Road Race Championship there in 1972; beating Tour de France and Worlds winner, Joop Zoetemelk into second place. 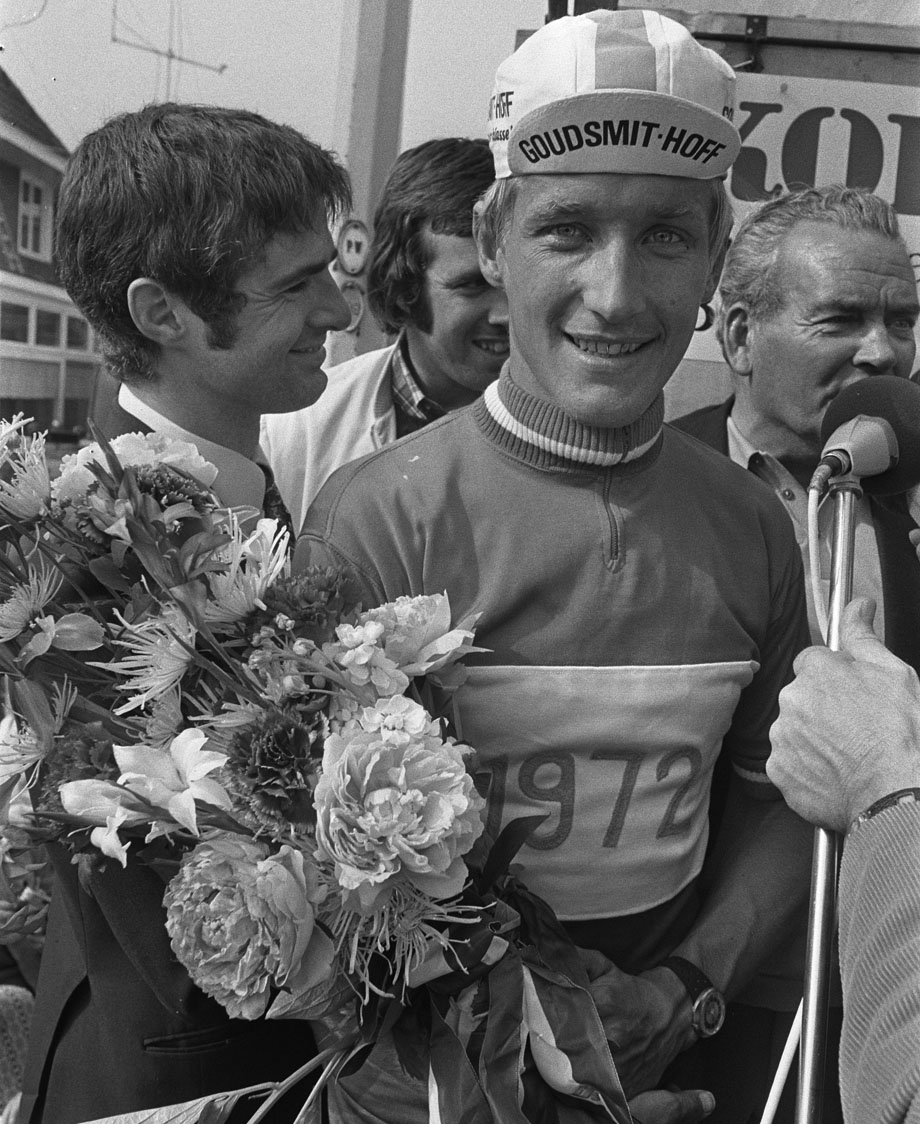 Mr. Tino Tabak is definitely old school 70’s and ‘tells it like it is,’ he took time to speak to PEZ recently. . . 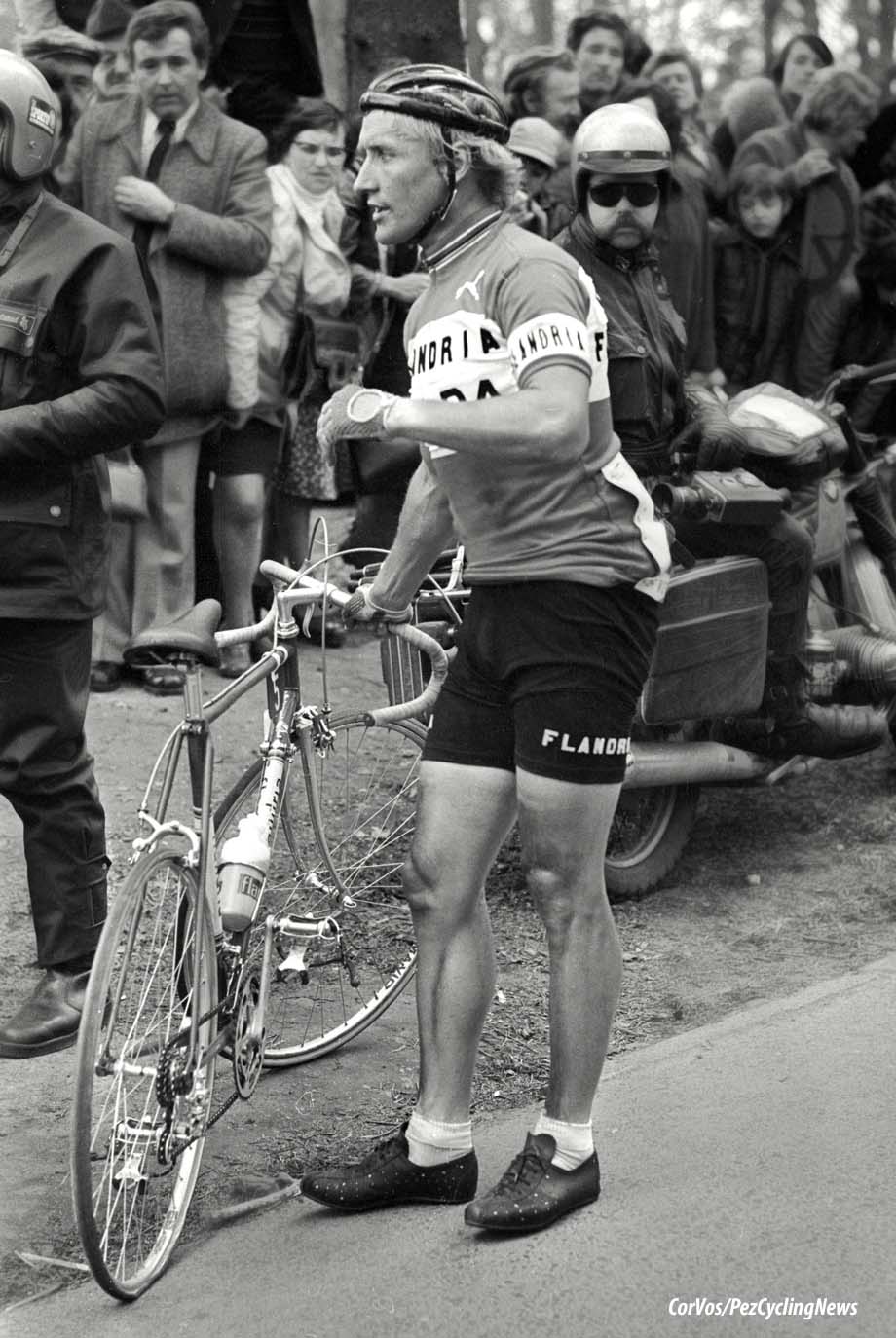 A Kiwi with the ‘Red Brigade’ – A puncture on the Kemmelberg

PEZ: you were born in The Netherlands but your family moved to New Zealand when you were a boy, Tino?
Tino Tabak: That’s right, we emigrated in 1953. I got into cycling and won all there was to win in New Zealand; the Tour of the Southland, three times, the Tour of Manawatu twice and the Dulux Tour twice. I won all three in the same year, twice, in ’66 and ’67. I also won the National Senior Road Race Championship as a junior. 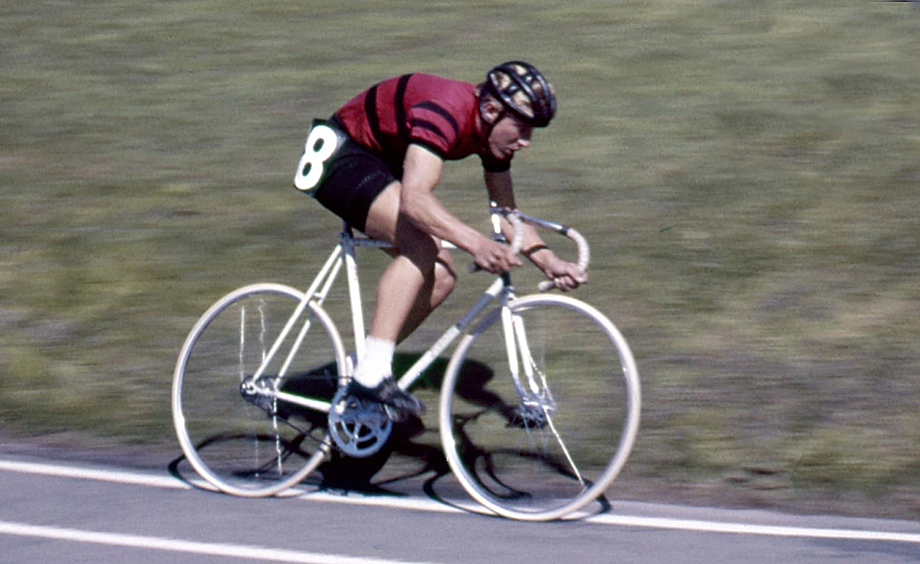 Tabak was also a track rider

PEZ: Then back to the land of your birth in 1969?
To learn how to race at a higher level. The Dutch Federation welcomed me back and I joined the Olympia Amsterdam club. There were pre-season training races and I won in them. I rode in Belgium too, Gent-Ypres where I was second to a Belgian rider, we were away together, he stopped coming through, saying he was tired and wouldn’t sprint – but of course, he did! I didn’t realise it at the time but rides like that were getting noticed. 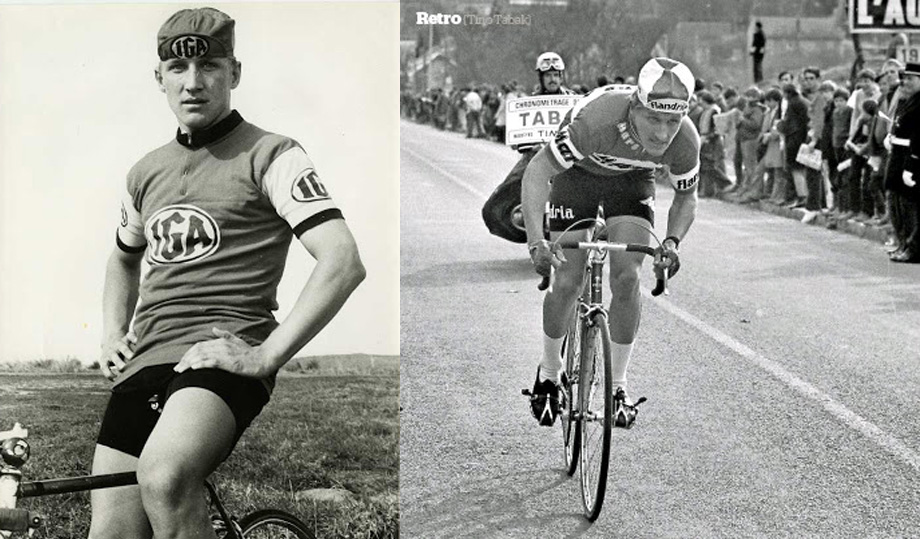 PEZ: The following season, 1970 was a good one for you.
I rode the Milk Race in England, won the Tour of North Holland, was in the Dutch team which took bronze in the Worlds TTT at Leicester then won a stage in the Tour de l’Avenir. Those rides started to get things moving for me. 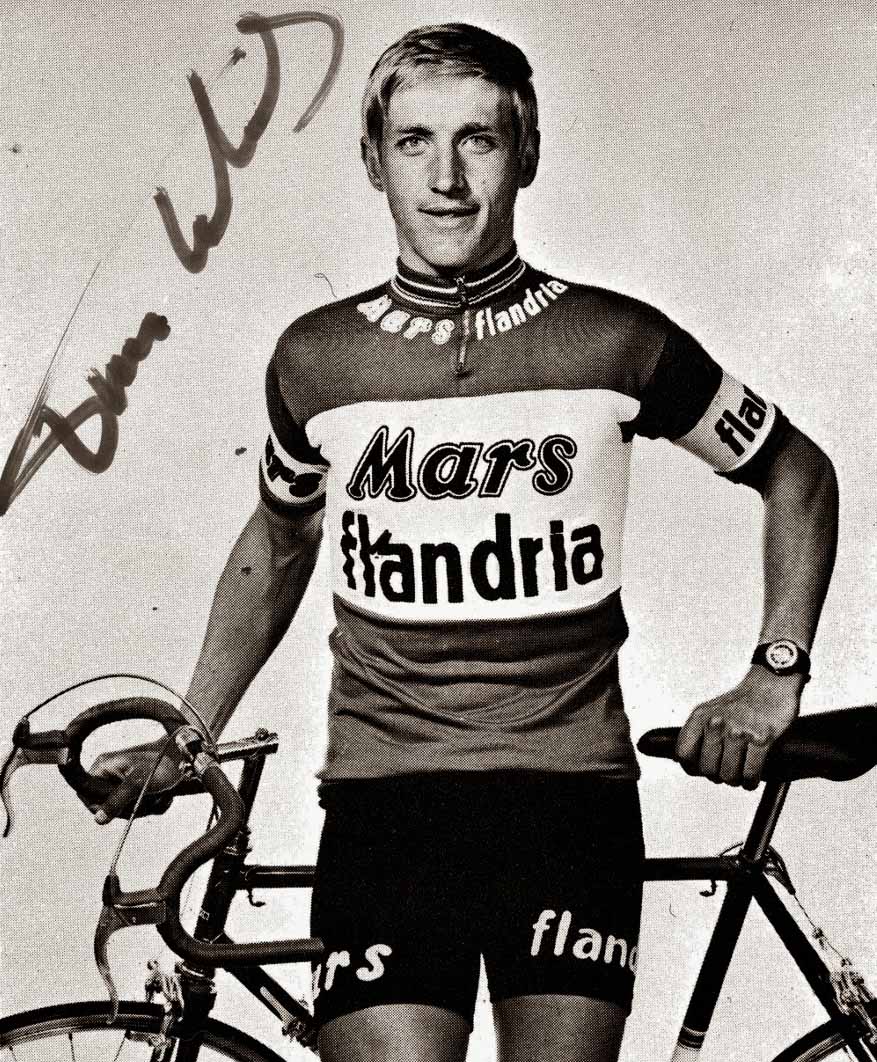 PEZ: And those kind of rides got you a contract with the legendary Flandria team for 1971.
Mars were co-sponsors that year of the famous ‘Red Brigade,’ It had men like Joop Zoetemelk, Roger De Vlaeminck – who I got along well with – and the late, great Jean Pierre Monseré as team mates. I got on fine with my team mates, I find Belgians to be easy going people. 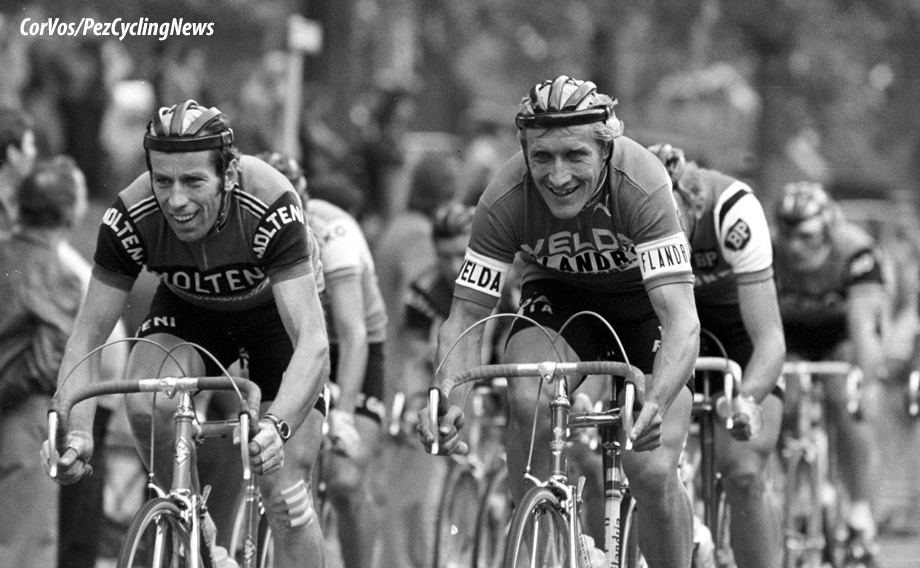 With Flandria, next to Jos Huismans of Molteni

PEZ: You rode the Classics, the Vuelta – which was in the spring back then – and Tour de France; a big programme for a neo pro.
Riding the Tour was my downfall, I believe. It had always been my dream, the pinnacle for me and sub-consciously I think that being on the start line meant I had achieved my ambition and it affected my motivation. I remember standing on the start line and saying to Joop Zoetemelk; ‘this is my dream come true.’ In the early stages of the race I was in the break which shaped the final classement but got sick and was DNF on Stage 10 to Grenoble. The following year I finished it though, in 18th place, they make a bit of a thing about that in New Zealand but in Europe people know it doesn’t mean much. 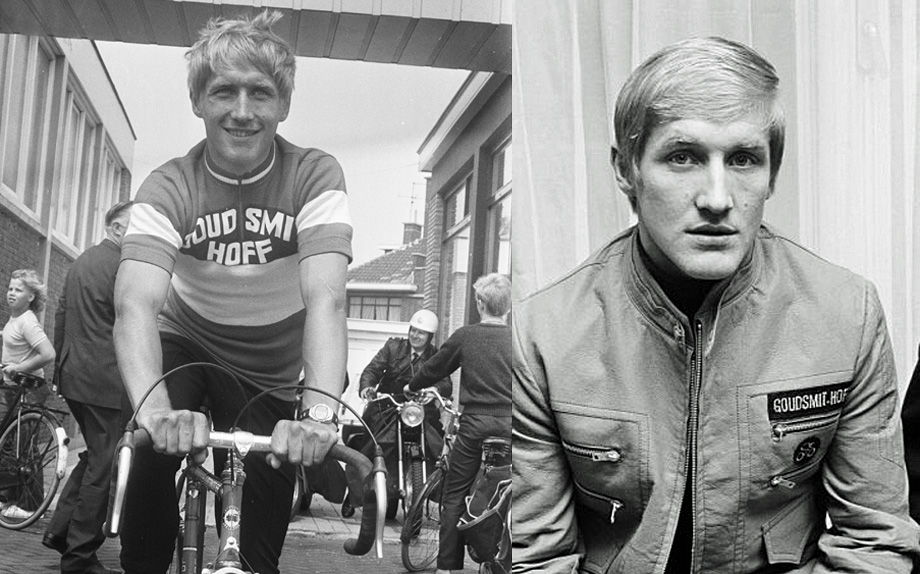 A successful time with Goudsmit

PEZ: Goudsmit Hoff for 1972.
It was a Dutch team and I knew a lot of the guys, it was more to do with friendship than money. It was a good move, I started to develop there as a rider and won the Dutch Professional Road Race Championship. 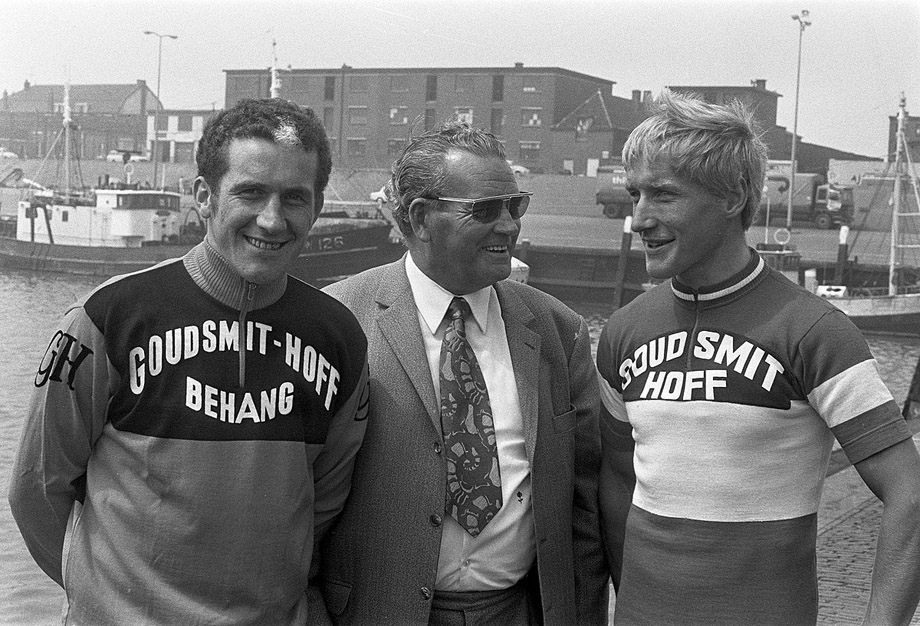 PEZ: Sonolor in ’73 – why move?
Goudsmit Hoff had been around for years, initially as Caballero but the director passed away and the team finished. It wasn’t a good move, I couldn’t speak the language and the French team culture was completely different to what I was used to on a Dutch team. I had good form at the start of the season with wins in Cannes and Mentone in the South of France then I was on the podium in Kuurne-Brussels-Kuurne. But I’d had issues even before the season started, I’d agreed provisionally to ride with Gitane and they tried to hold me to it. And then I really wasn’t comfortable at Sonolor; I remember in Paris-Roubaix I needed a wheel change but Stablinski our team manager told me just to keep riding, the wheel collapsed and that was that. I felt it was a difficult period to be in the sport, it was changing from one era to another and a lot of the managers didn’t really have it in them. 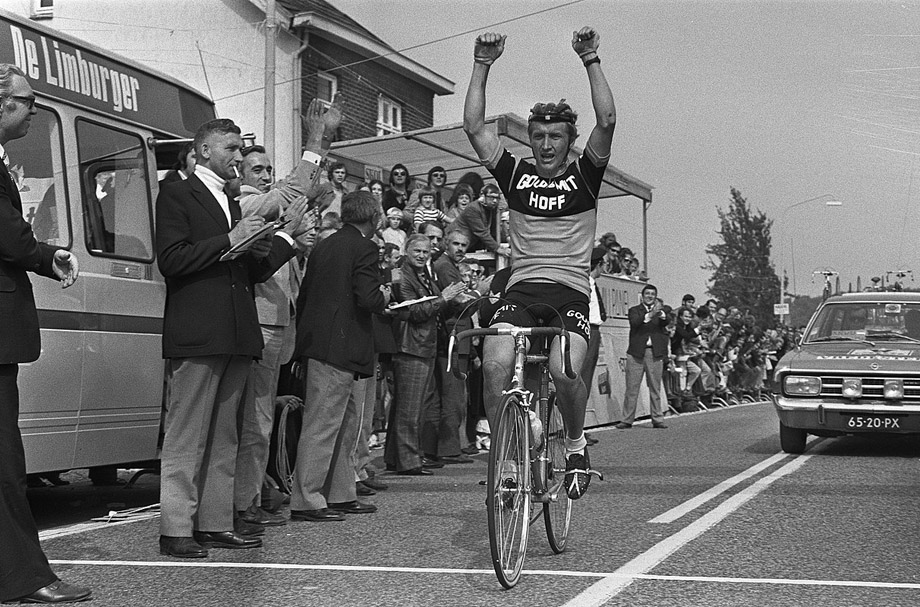 PEZ: The mighty Raleigh team for ’74 – and the legend that is Peter Post. . .
I had my moments with him but in the main I got along well with him; the fact that I could speak English and he couldn’t was in my favour, I could communicate with the English guys for him. I don’t think he was ‘anti’ English guys, it was just that his one objective was to build the best team in the world and he didn’t think he could achieve that with English riders. But I have to tell you, if he said; ‘jump!’ you jumped! 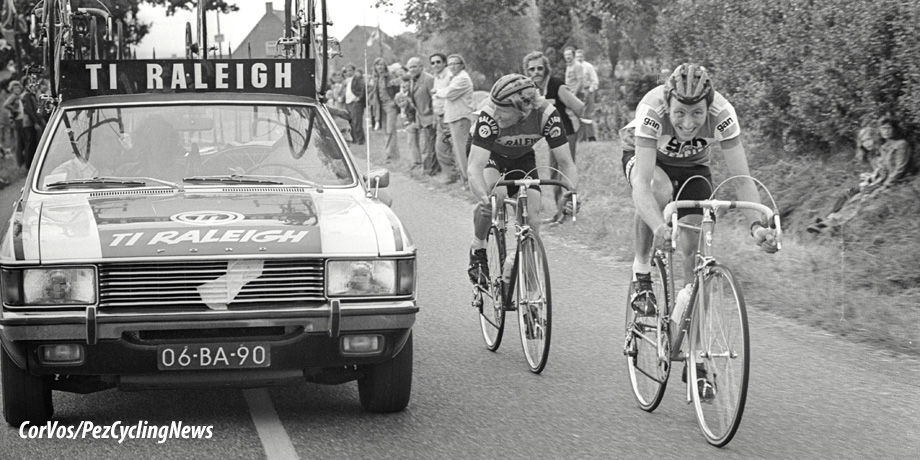 PEZ: ’74 and ’75 were good seasons for you with six wins in ’74 then podiums at Kuurne and Dwars door in ‘75.
I had good seasons most years but things were different back then, teams judged you on what you won – you were expected to get two or three wins each year to justify your contract. It’s different now with guys basing their whole season on one race. Now it’s more about specialisation; you’re a sprinter or a climber or a time trial rider. Back then it bred more all-round riders. And I think race radios have had a very negative effect on races, back then you only knew what gaps were when the blackboard guy came up on the motorbike – it was more spontaneous, you had to work things out for yourself. Race radios take the cycling out of cycling. And I look at Froome sitting behind his Ineos team; when Merckx won, he raced and won! 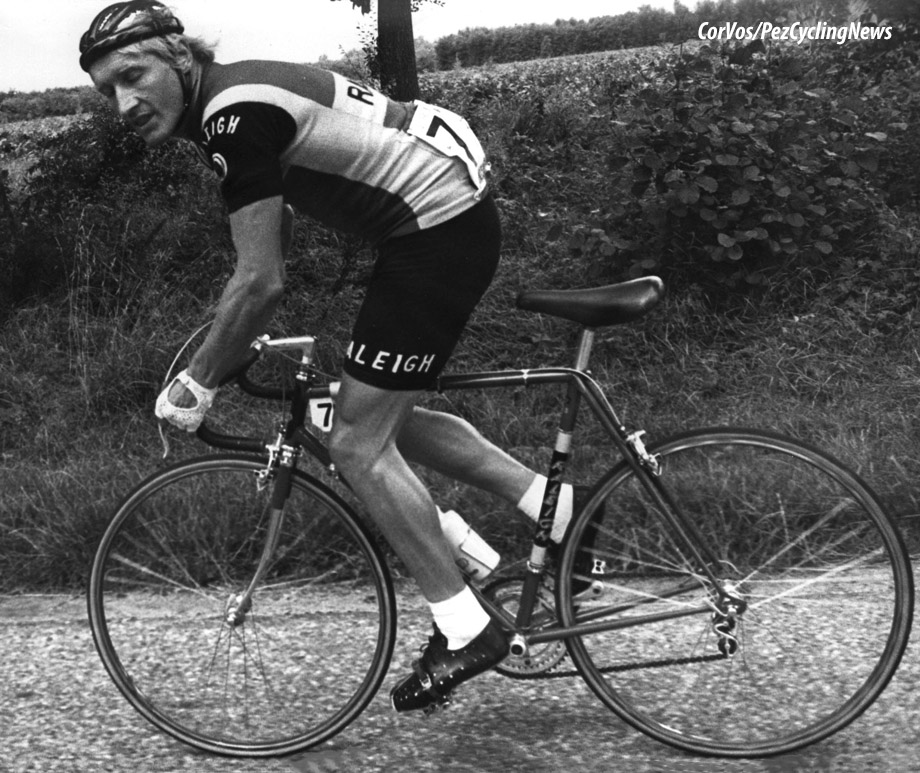 PEZ: You went back to Flandria in ’76.
I had good relations with the Belgian guys and was proud to back on the squad with guys like the late Marc Demeyer, Freddy Maertens and Michel Pollentier. 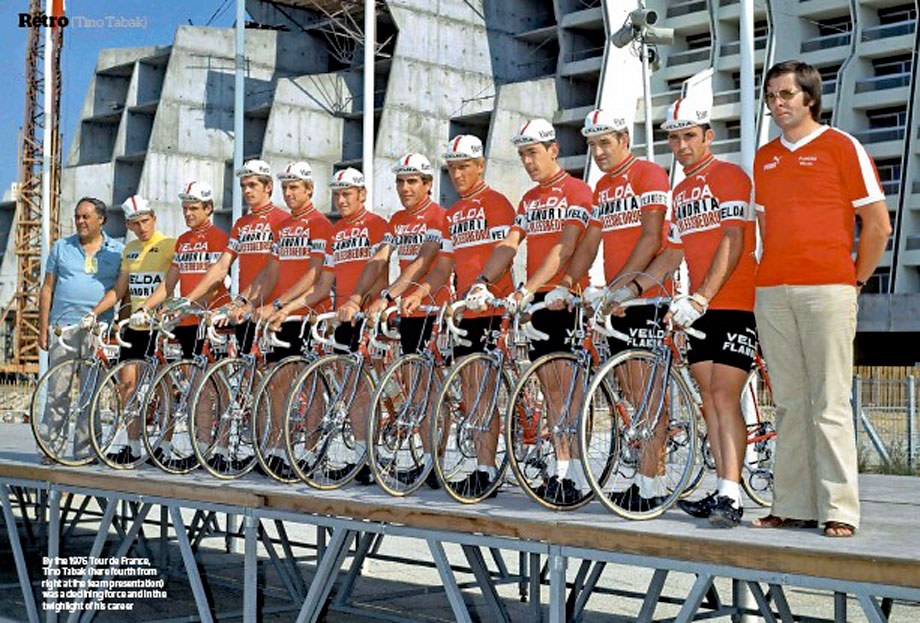 PEZ: Just one season then onto smaller teams – De Ondermeming in ’77 and Zoppas Zeus in ’78.
I was coming to the end of my career, I was getting tired. I’d opened a hotel and trying to combine the two just didn’t work; it was a struggle to keep the business going and train and race. Alcohol and sport don’t mix – and my motivation was gone, there were too many distractions with the hotel. My ‘oomph’ was no longer there, that sharpness of wanting to perform. Those teams were low budget but it was a question of still wanting to be part of a team – but at the back of my mind there was always the hotel. If you lose motivation it’s not possible to go out and do three or four hours in the rain and snow – when I look back I think; ‘how the hell did I used to do that?’

On the way to winning the Acht van Cham

Nowadays guys can afford to stop and have money there to live on; not back in my day, a very few were set up, the rest had to go straight into jobs. I remember towards the end of my career seeing the Raleigh and Molteni team cars parked outside Novotel – the teams I raced with latterly simply couldn’t afford to stay in places like that. I look at the money in the sport now – those buses, where does the money come from? We had a truck with no heating and the team cars. But all that stuff I’ve been through was part of the journey to where I am now. 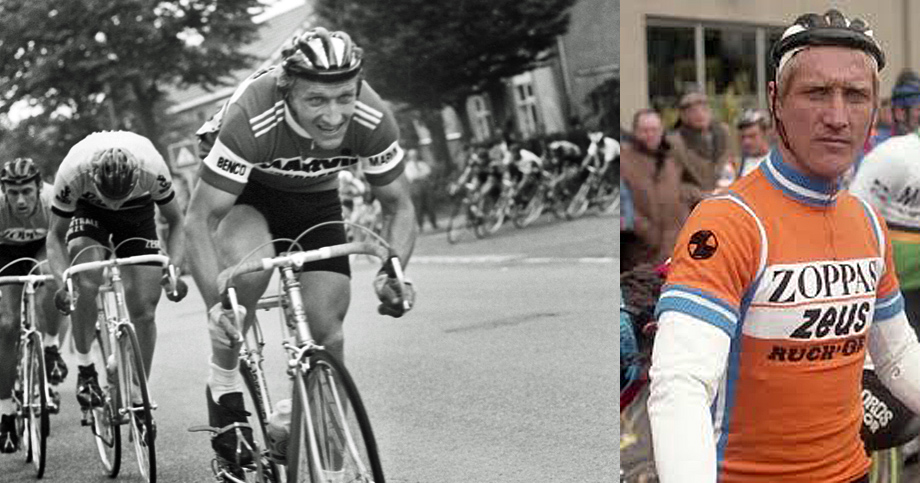 PEZ: If you had your time over?
I get asked that a lot; I wouldn’t change one hour of my life, it was all part of getting me to where I am now. I have a nice home and land and can travel, we’d be in India right now if it wasn’t for the pandemic – I’ve had a good life and I give thanks for it. 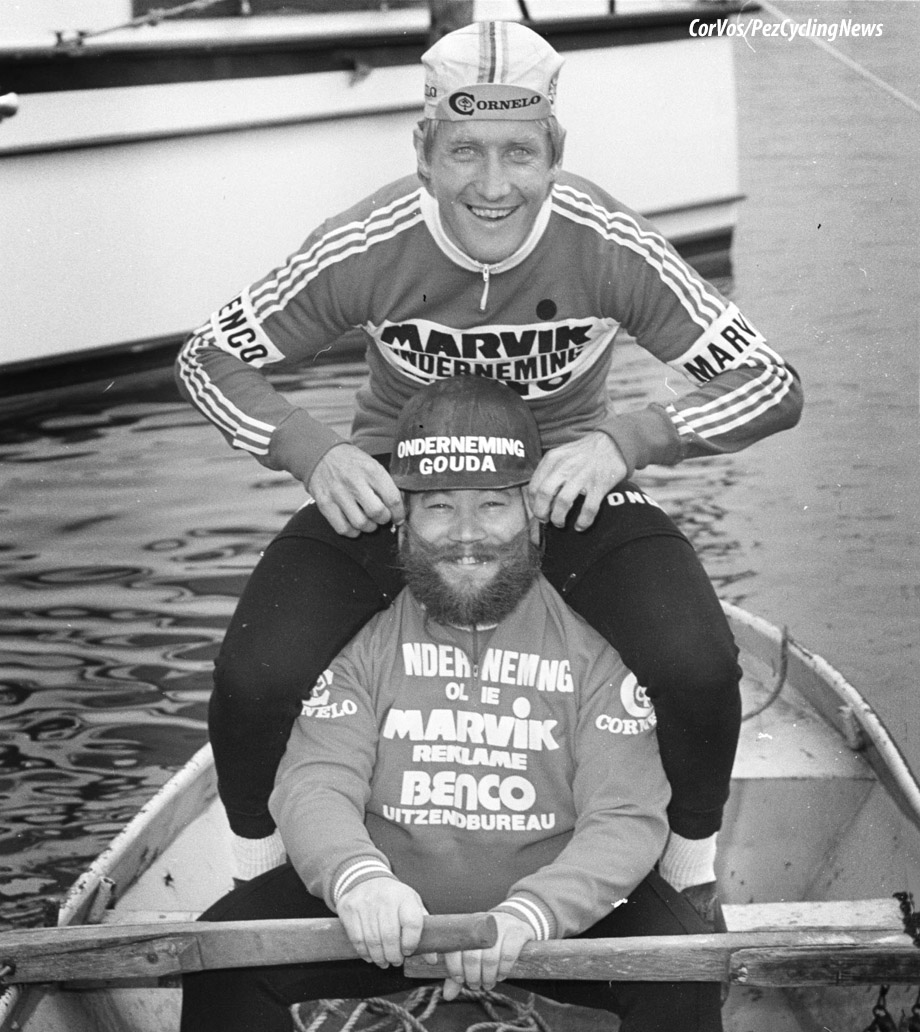 With the famous pacer Joop Zijlaard