Interview: Vern Hanaray’s cycling career spanned the 60s, 70s and into the 80s, from his home in New Zealand through Belgium, France and Britain with a lot of wins along the way. Hanaray is now based for half the year in Daytona and Ed Hood caught up with him to hear his story. 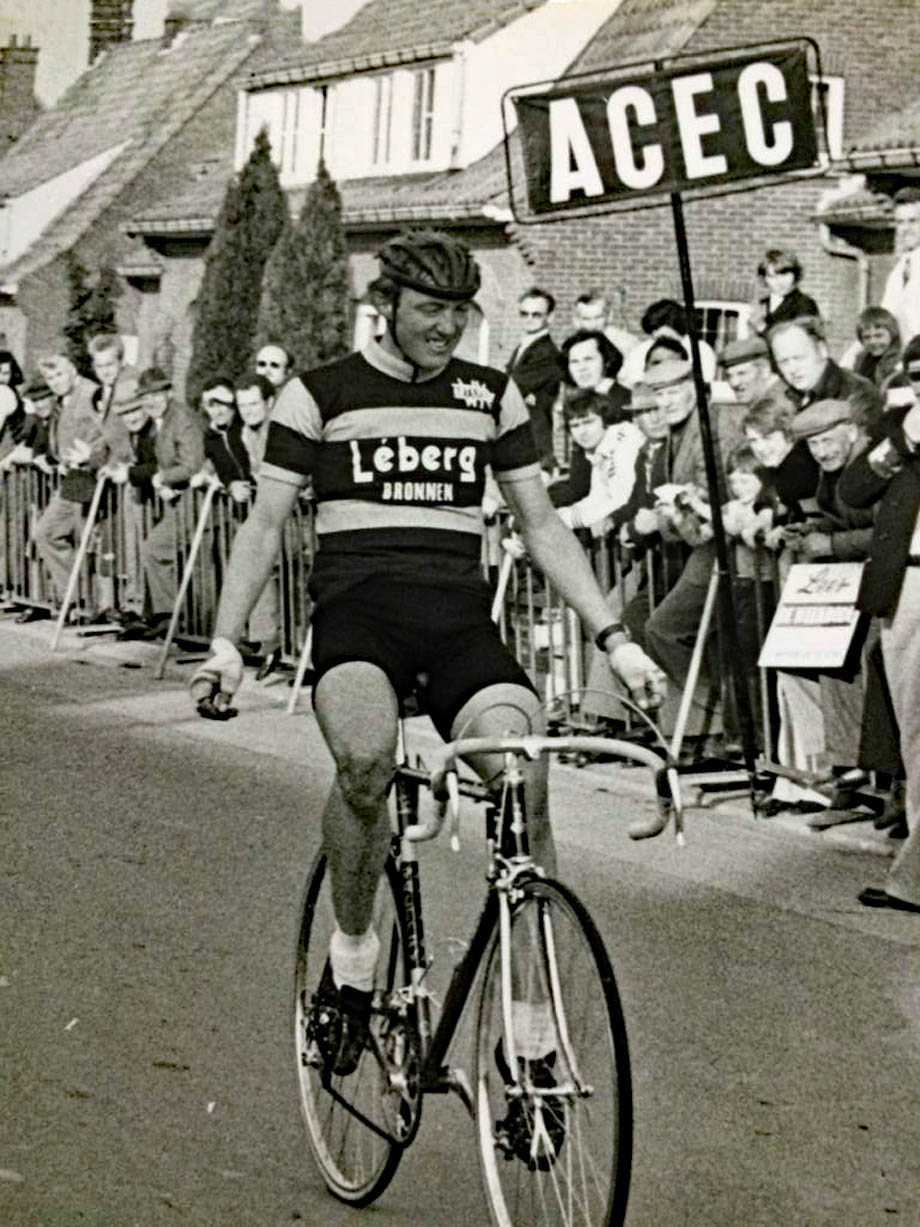 He was part of the legendary ANC team; albeit this gentleman maintains that he wasn’t really the mechanic with the team, he; ‘just washed the bikes then passed them to a real mechanic.’ But before he donned his Wellington boots and picked up a sponge he wasn’t at all bad on a bike himself; three times champion of New Zealand, a winner of major events in the UK and in Netherlands and Belgium in the era of the likes of Fons De Wolf and Frankie Hoste. He’s Mr. Vernon Hanaray. 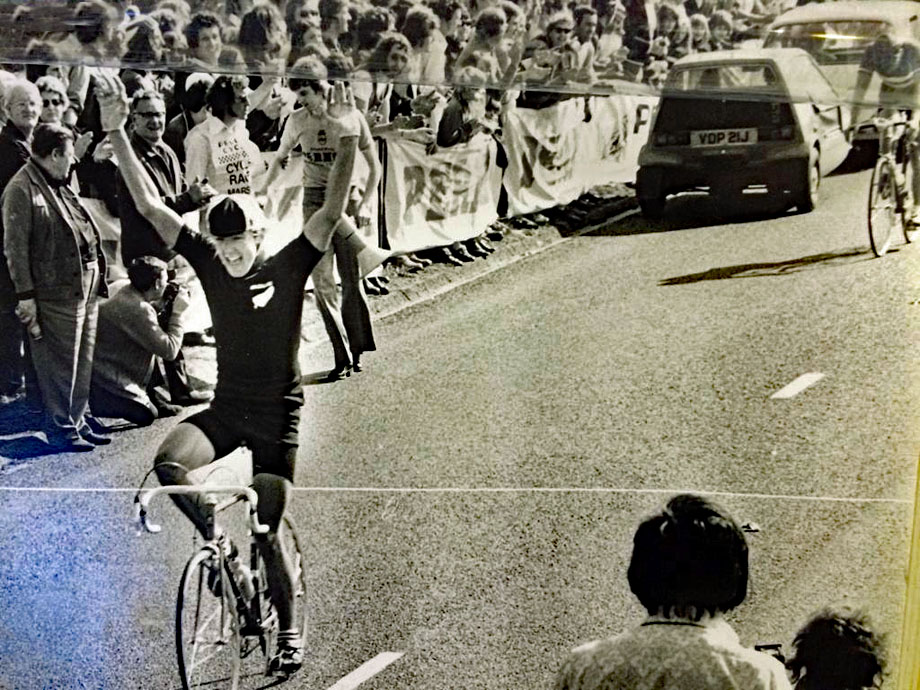 PEZ: Three times Road Race Champion of New Zealand, Vern – which one gave you most satisfaction?
Vern Hanaray: The first one, I knew I was riding well but there were bigger names than me in the race and guys from the east coast of the North Island weren’t meant to win big races, it wasn’t a cycling ‘hotbed.’ 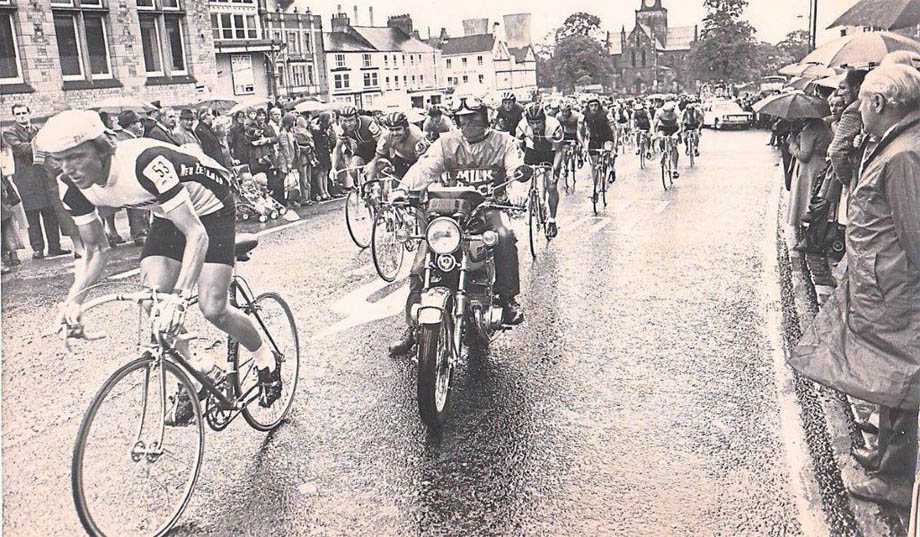 PEZ: You won the Dulux Tour too, that was the biggest stage race in the country, did that get you much Media attention?
Yeah, I made the front cover of Sports Illustrated magazine with that one, I’d scraped third the year before. Tino Tabak had been National Champion and won the Dulux in the years before I did, he was the man that really set New Zealand cycling aflame. [Tabak had emigrated to New Zealand from the Netherlands with his parents as a young boy, he dominated New Zealand cycling before returning to the Netherlands where his strong performances gained him a professional contract with Flandria, he went on to ride the Tour de France where he finished in the top 20 and won the Dutch Professional Road Race Championship, ed.] 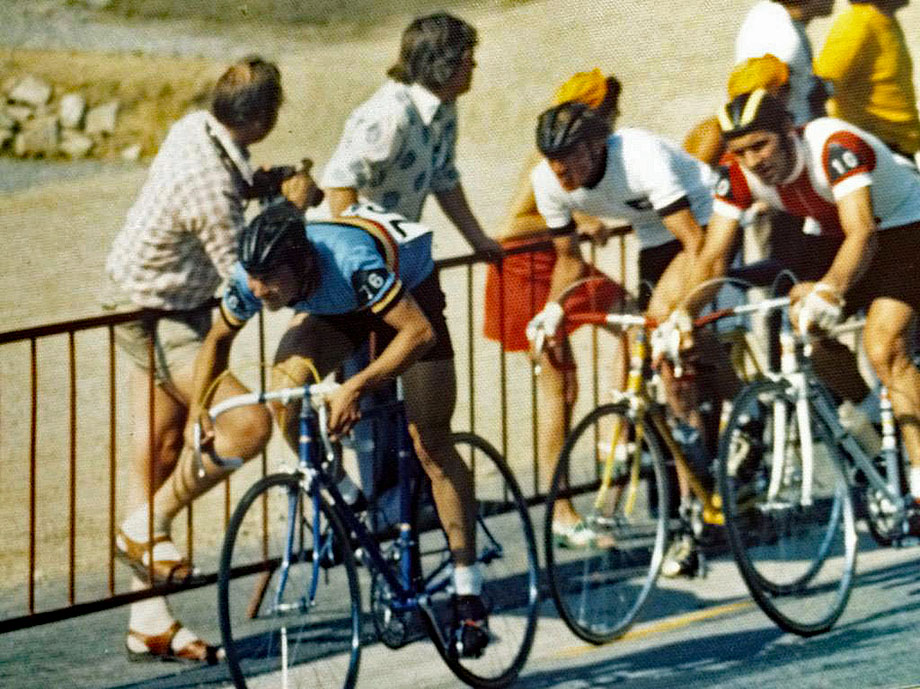 PEZ: You were fourth in your ‘home’ Commonwealth Games in Christchurch, it must have been a disappointment to miss a medal?
Yeah, Clyde Sefton of Aussie and ‘Griffo’ [Phil Griffiths, England, a road and time trial star in the UK ed.] were up the road and then Remo Sansonetti, another Aussie pipped me for bronze – I knew the Aussies but at that time had never heard of ‘Griffo.’ 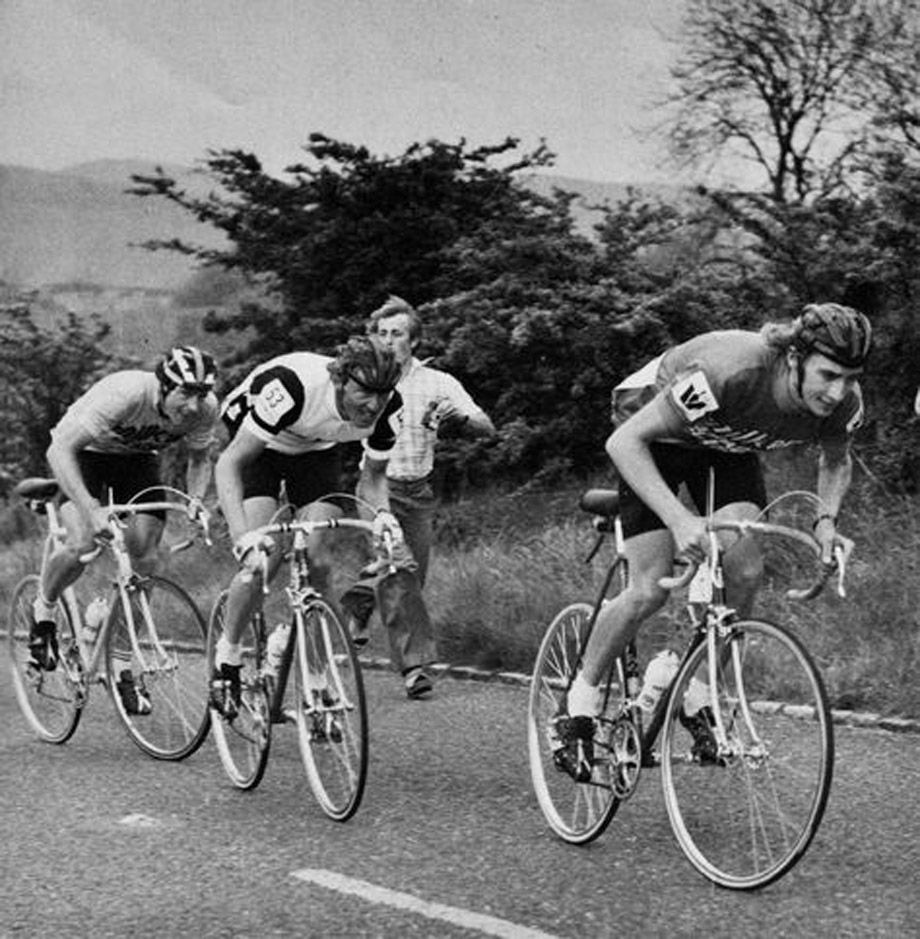 PEZ: You won the Archer Grand Prix, were second in the Manx International and fourth in the Tour of the Cotswolds all top British races, how did you end up in England?
At Christchurch I was out for a ride and bumped into Griffo, he invited me to come to England so I took him up on the offer, it was my route into European racing. It was difficult at first in the English races because obviously I had no local knowledge. 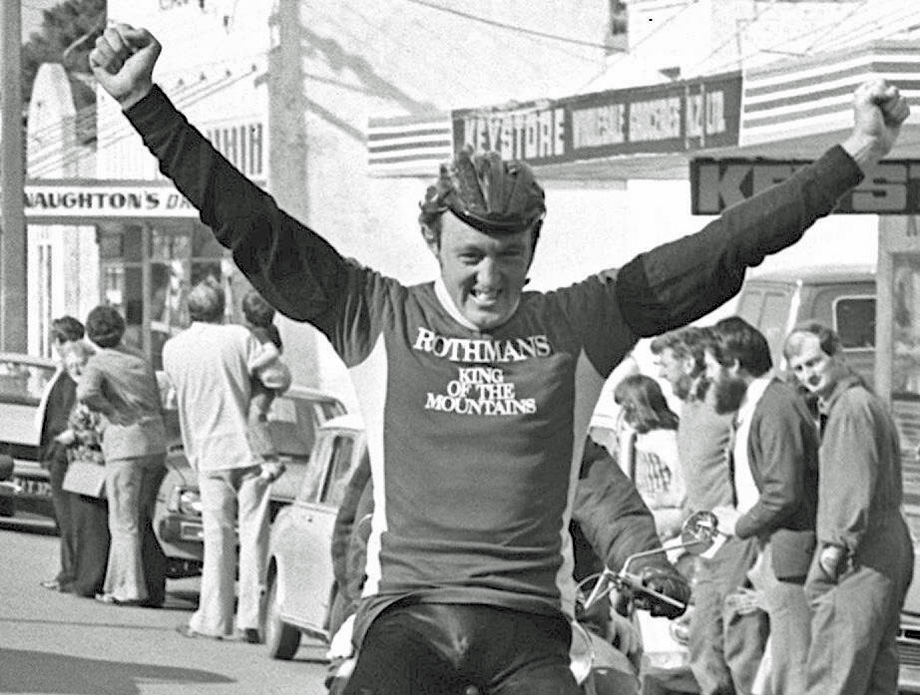 PEZ: How did the UK races compare to the New Zealand scene?
They were a lot more competitive, there were some strong guys, I remember chasing a break with Ian Hallam (second in the 1970 world amateur pursuit championship and twice an Olympic bronze medal team pursuiter, ed.), we were sitting at 30 mph – I said to him at the finish; ‘you were ripping my legs off!’ He replied; ‘you were doing the same to me!’ The thing that puzzled me though was that it was so easy to get to the continent to race but few of the English guys wanted to? 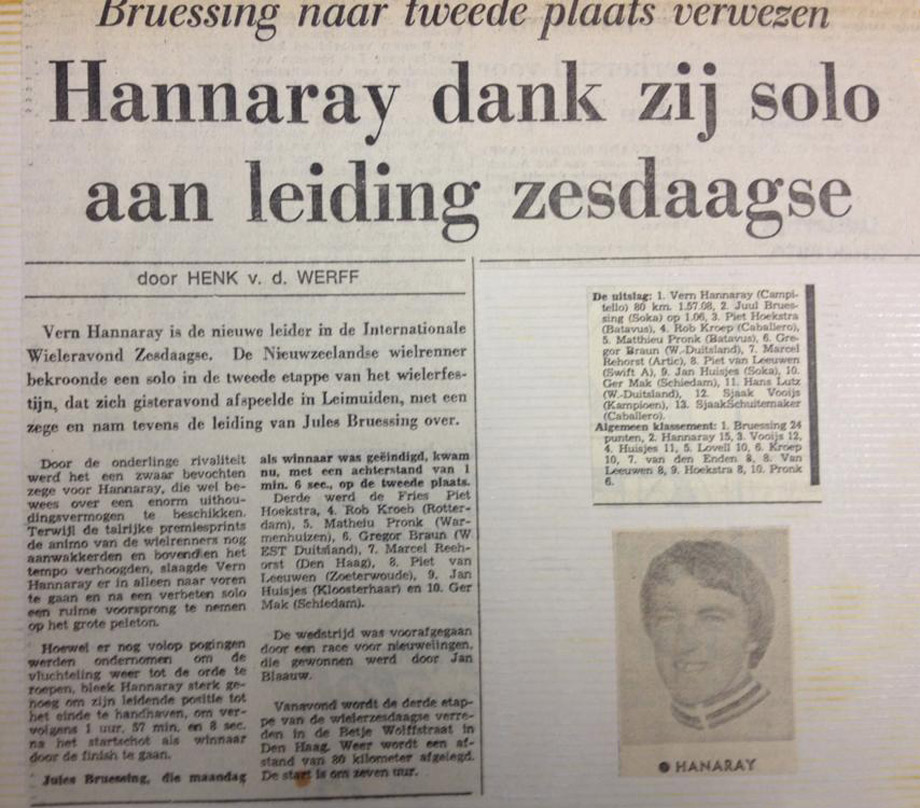 PEZ: You rode well in the ’76 Tour of Britain, Milk Race.
The first week of that race I was just getting into my stride albeit I was in a break on Stage One which got caught late in the day. I had good form at that start of that year, I’d stayed in Belgium over the winter and had been riding cyclo-crosses so I was well prepared. The final week of that Milk Race they had the ‘Blackpool Centenary’ award which was for the best rider overall in the last week over all the different classifications – GC, points and mountains – I won it, beating Jan Brezny of Poland. 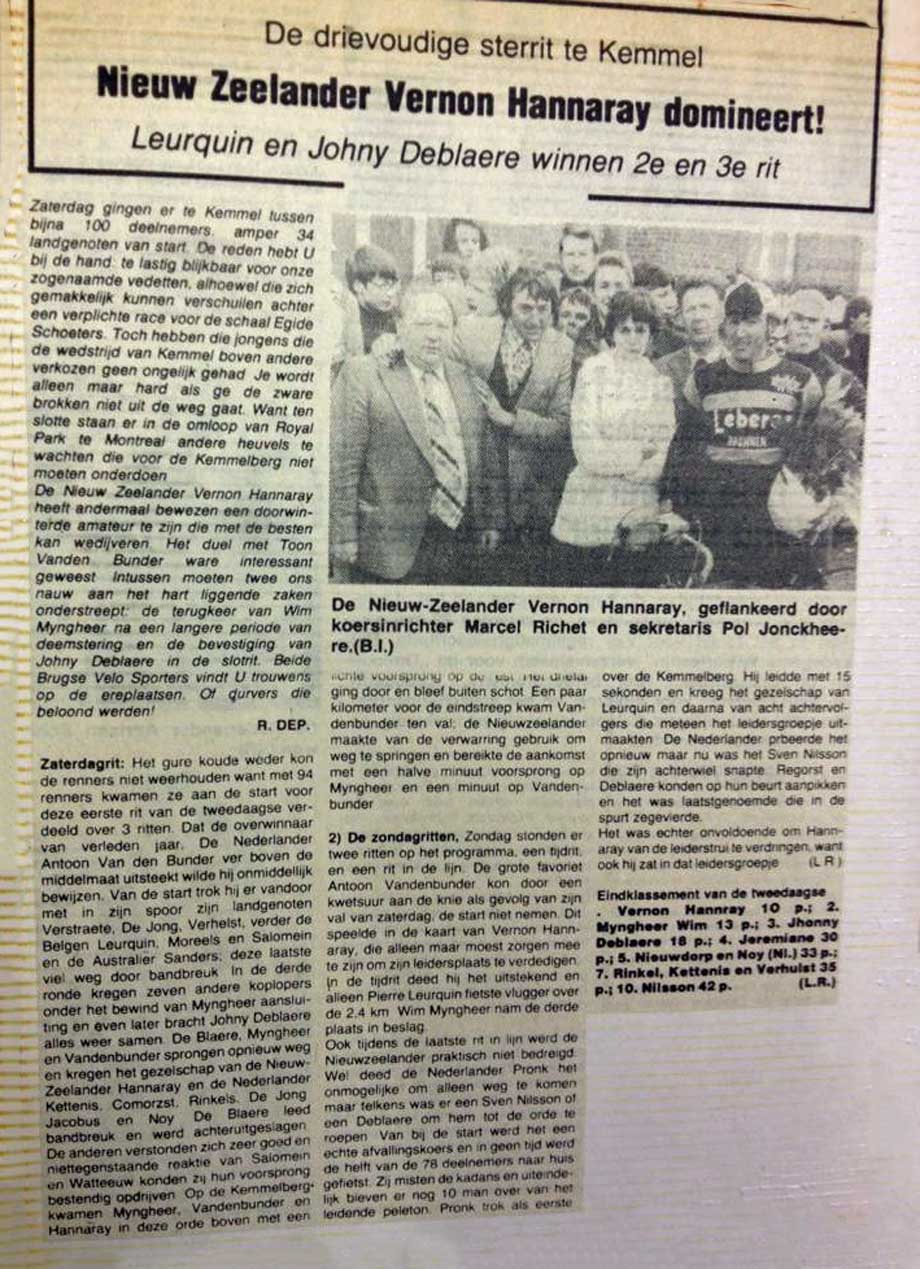 PEZ: Your adventures in Belgium?
I was there ’75, ’76 but was back in New Zealand for 1977. The thing was that there were hundreds of good guys in Belgium, some of them winning 50 or 60 kermises each year, they were making so much money they couldn’t afford to turn pro. I was really lucky with my accommodation, some guys stayed in pretty dodgy places but I live on a barge in the centre of Gent. You joined a club and they gave you a couple of jerseys to race in. At the start of ’76 I was going really well and won half-a-dozen races, I was there to prepare for the Olympics – which were a bid deal to a Kiwi, unfortunately I crashed out – but when I got back to Belgium after the Games I didn’t win another race. I was racing against guys like Fons De Wolf, Frank Hoste, Claude Criquielion and Rudy Pevenage who all had big supporters clubs. The good thing was that if you got in the break with one of those guys then they’d pay you off for the win. I also had some nice results in The Netherlands, taking a stage in a six day race there. 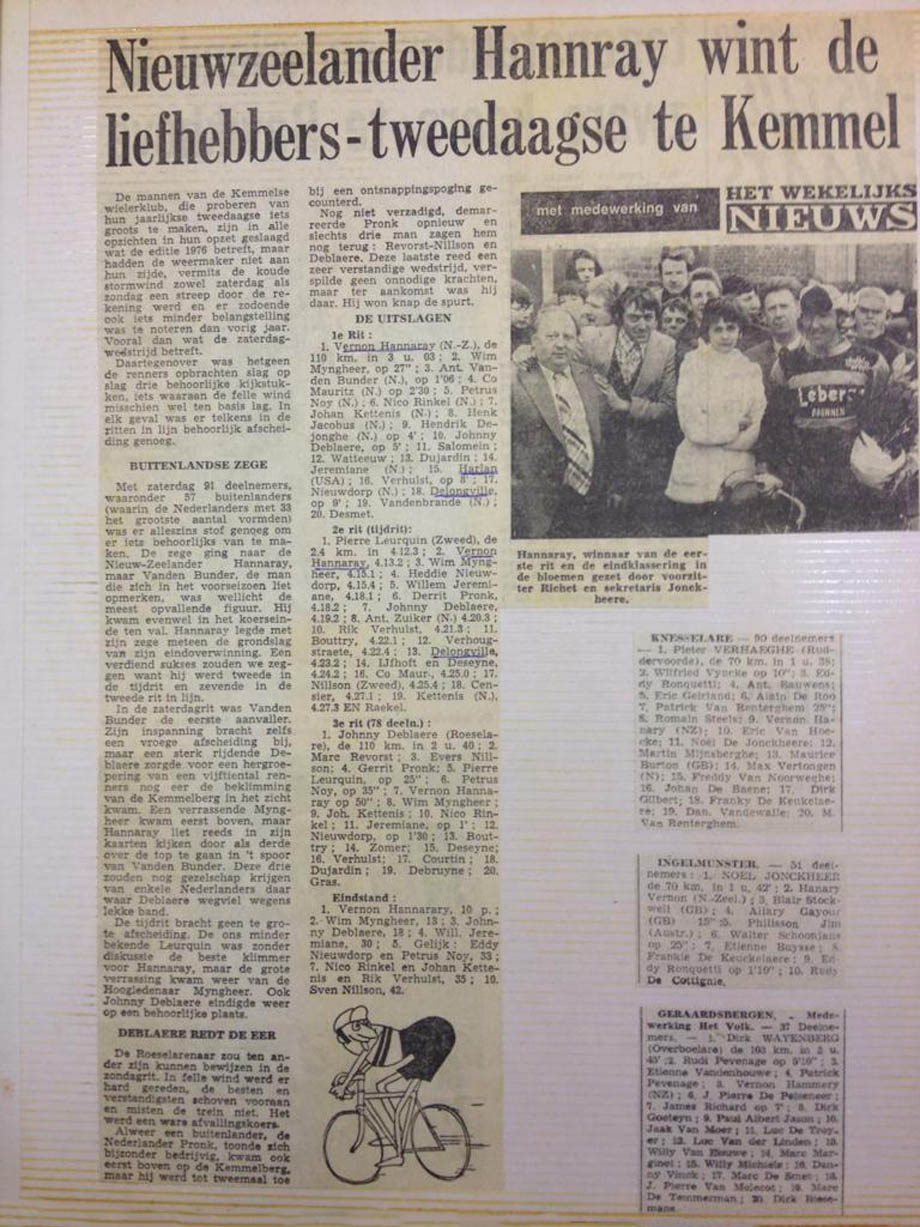 PEZ: Did you ever think about turning pro?
If I’d come back to Europe for ’77 I would have, I should have come back for that season, that’s a regret. And that winter when I was riding the cyclo-crosses, Danny Clark approached me and asked if I’d ride the six days with him but I didn’t fancy it. 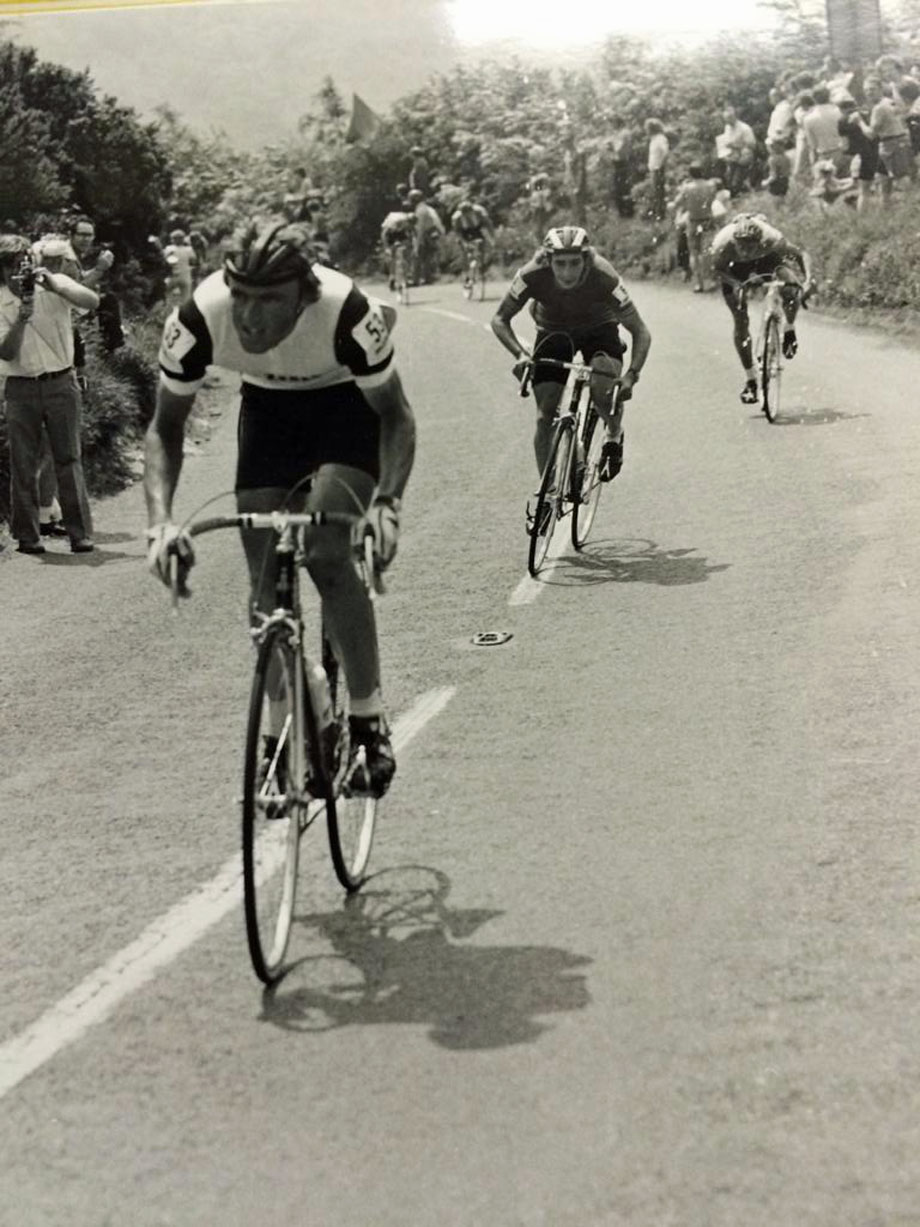 Being chased by GB’s Joe Waugh

PEZ: You won a Milk Race stage in 1980.
I’d got my form back and that was a bit of a ‘last hurrah,’ I was the only English speaker to win a stage in that race [the USSR won overall with Ivan Mitchtenko from team mates Galialetdinov and Sukhoroutchenkov, the Soviets took seven stages, the Poles two plus the prologue, Czechoslovakia one, Sweden one plus Vern’s win on Stage Eight, ed.] 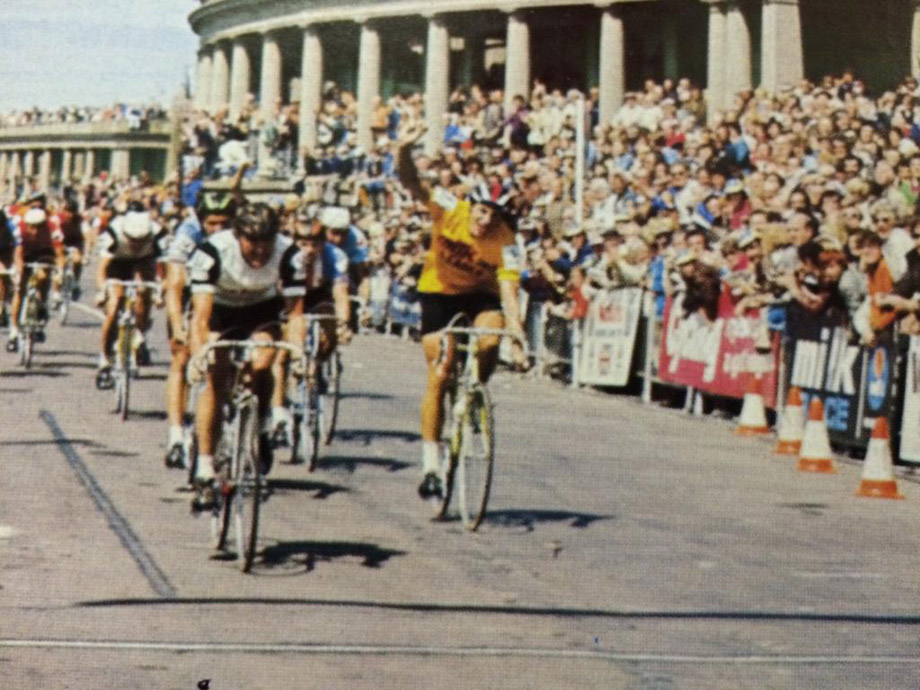 PEZ: A Kiwi North Staffs Division Champion in England 1981?
I was registered with a local club so there was no problem but I had a gastric hernia that year and couldn’t keep food down – initially I didn’t know what was wrong. 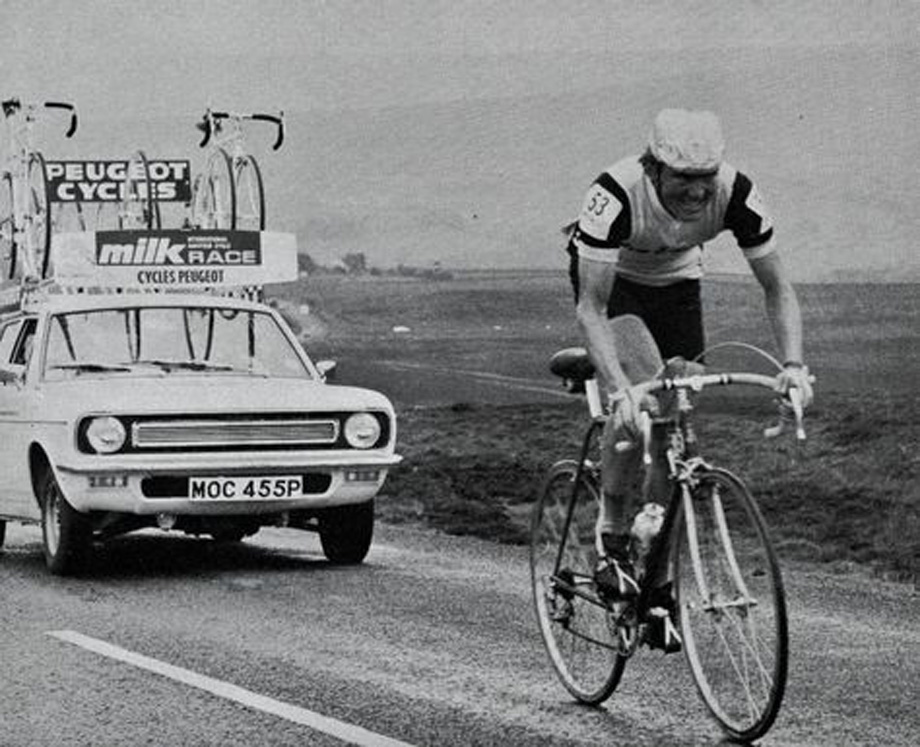 PEZ: And you stayed in England becoming a mechanic with ANC?
I was part of Griffo’s social circle and he asked me if I would drive the ANC team car at races; and I’d help out with the bikes. I would clean the bikes then pass them to a real mechanic to get checked over. 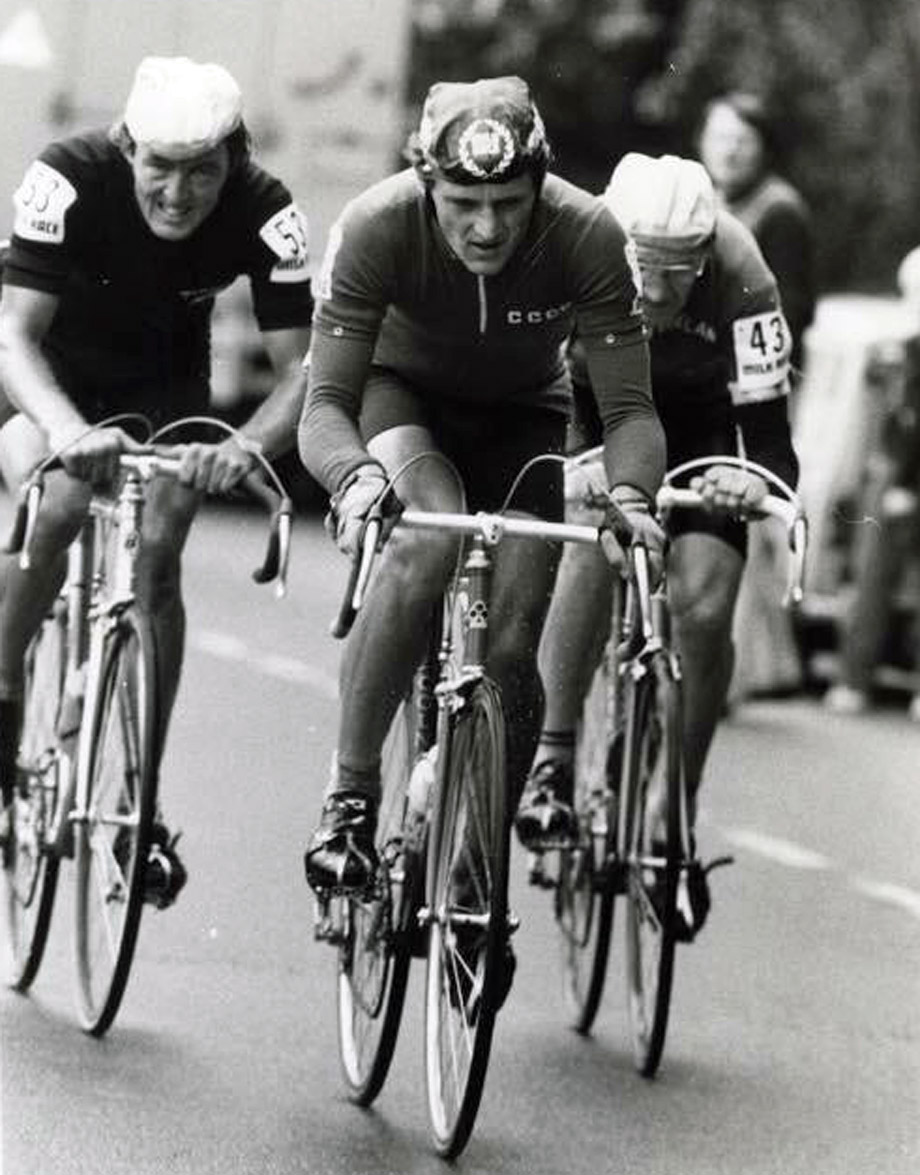 Mixing it with the Russians

PEZ: Wasn’t there a problem with you having a New Zealand passport when you were driving into France?
Yeah, the French intelligence service had sunk the Greenpeace ship the Rainbow Warrior in Auckland Harbour because she’d been making a nuisance of herself at French nuclear weapons tests at Mururoa Atoll in the Pacific. The French divers who did the deed had been imprisoned in New Zealand and relations between the two countries weren’t the best, Kiwis weren’t welcome in France back then. We were at border crossing into France and they started checking passports so Griffo went up and got a passport from one of the riders who was already through – Graham Jones, I think – and gave it to me. Then there was the time Malcolm Elliott had pulled out of a race and wanted to get home, he offered me a substantial number of francs if I could get him on that day’s ferry and not have to wait another day. We just made it and the guy at the ferry port customs post said to me; ‘perhaps a little slower next time, Monsieur?’

PEZ: Which rides in your career gave you most satisfaction?
Winning that Dulux Tour in ‘71 was amazing, a real breakthrough against top home and Australian opposition. In ’75 I won Stage Three in the Internationale Wielerarond Zesdaagse in the Netherlands. That was a nice win because the big hitting West German team pursuiters were there; Gregor Braun who was Olympic Individual and Team Pursuit Champion the next year in Montreal was seventh and his team mate Hans Lutz who was World Pursuit Champion ’74 and in the ’76 Olympic team with Braun finished in 11th place. In ’76 there was the Tweedaagse te Kemmel (Two Days of Kemmel) over three stages where you could ride any stage as an individual event but there was an overall GC if you rode all three. I won the first stage which went up the Kemmelberg eight times; I was second in the Stage Two time trial to Pierre Leurquin who only rode that stage, then in the afternoon Stage Three I was seventh to Johny Deblaere and that gave me the overall win. Those were probably the most memorable ones. 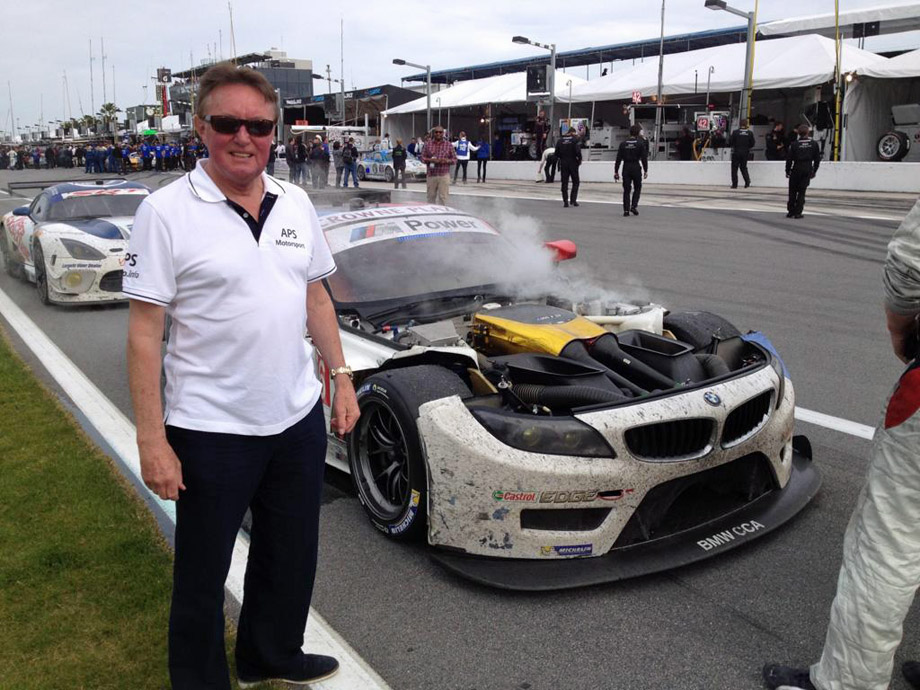 PEZ: And you’re into cars now?
It’s that bike rider thing – ‘speed attracts!’ There was a bad winter about 10 years ago, I said to my son that I had to get away from it. I met a guy from Florida and I have a place there now where I spend the winter. 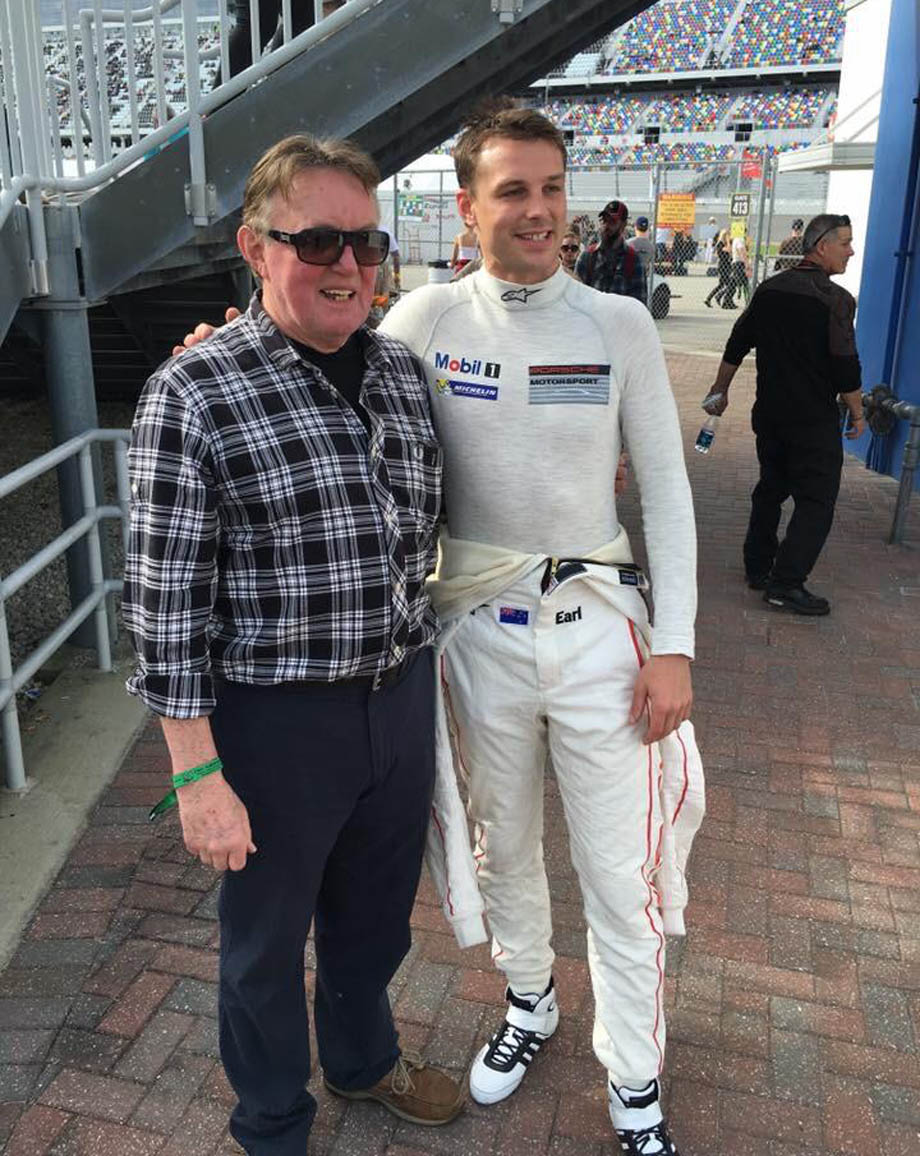 # Vern’s place in Florida is in Daytona, where else? With thanks to him for his time and sharing his memories and photos. # 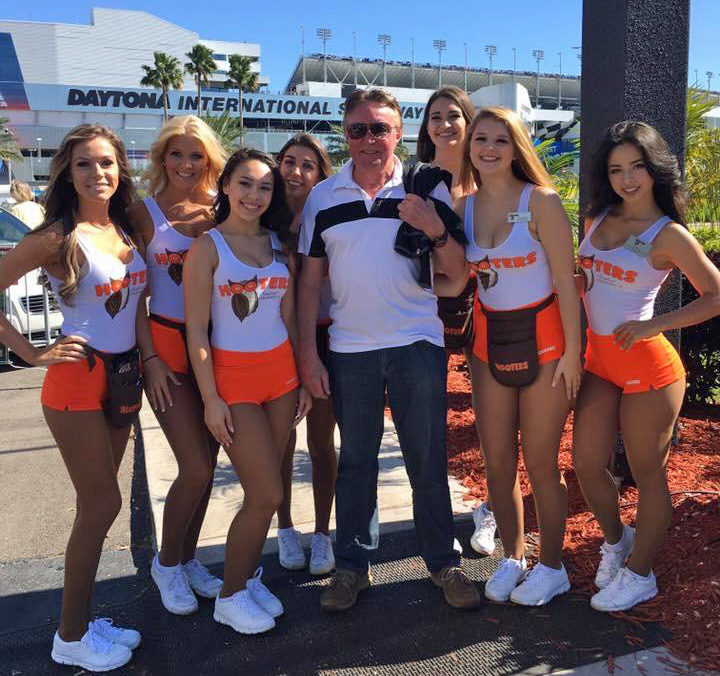