Former Gent-Wevelgem winner, Nico Mattan has a new team; with Frank Vandenbroucke; PEZ favourite, Bert Roesems and, it looks like – controversial German, Jorg Jaksche. We thought we better find out more – to hell with that cell phone bill! The first time we tried to set up the interview, Nico was too busy drinking champagne – figures! But eventually, we got our man…

PEZ: Are you missing racing, Nico?
Nico: Sometimes at the start line, but it’s better in the car, especially if it’s raining!

I raced for 22 years; that was enough, I only do one or two hours each week on the bike now. 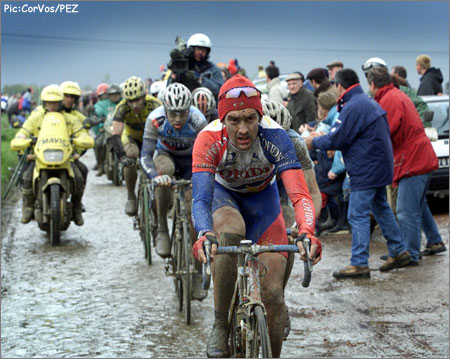 PEZ: I hear you’ve been dancing, on the TV?
Nico: Yes, I’ve been on the TV program ‘Stars on the Dance Floor,’ doing stupid things!

PEZ: A new team – Cinelli?
Nico: The team will be split between Italy and Belgium. 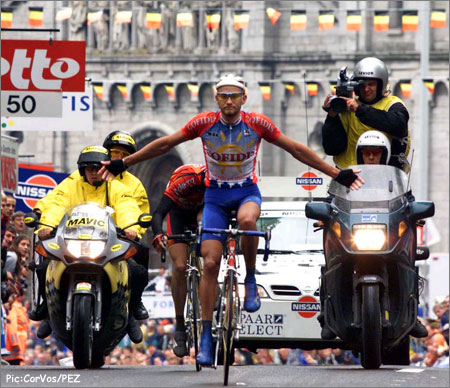 One last chance for VDB to regain his once immense capabilities.

Simone Biasci of Cinelli thinks that Frank Vandenbroucke should get one last chance; V de B has his own sponsor, a friend of his who will be investing in the squad.

I have Bert Roesems as team captain plus we’ll have young Belgian riders who have still to be confirmed – there’s no shortage of talent available! 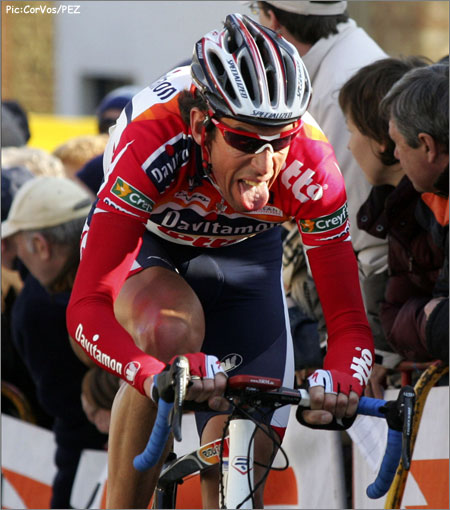 Big Bert has found a home with Cinelli for 2009.

PEZ: Is it difficult to attract sponsorship in Belgium, with the financial situation and drugs scandals?
Nico: Cycling is still very popular in Belgium – you’ll see 50 VIP’s at every race, people want to invest in it.

Frank’s friend has committed 200,000 euros from himself and other sponsors; he said it’s 100% solid. 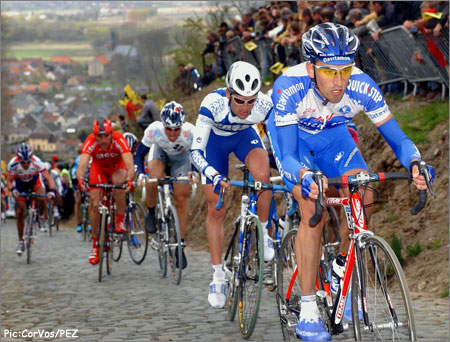 In Germany it’s different; they don’t have the riders, the sport isn’t as popular and then it’s difficult to get sponsors to invest.

The situation with Schumacher and Kohl doesn’t help, but maybe that’s an excuse for sponsors not to come up with the money? 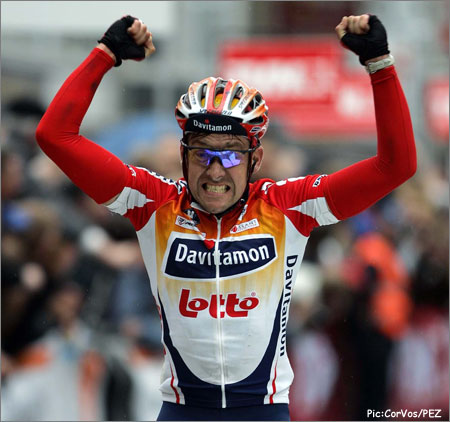 Remember Nico’s huge win at Gent-Wevelgem a few years back?

PEZ: Riders?
Nico: Frank, Bert and three or four young guys, we’re talking to six or seven at the moment, but we’ll confirm with three or four; like I said, there’s no shortage of riders looking for a team.

Frank is training well; he’s skinny, good in the head and looking very nice on the bike.

PEZ: Can Frank put his troubles behind him?
Nico: He’s 34 now, he knows what’s needed – he was one of the best classics riders there was.

I know him better than anyone but I can’t go home with him, I can’t be with him after 9.00 pm, but at the moment everything is good. 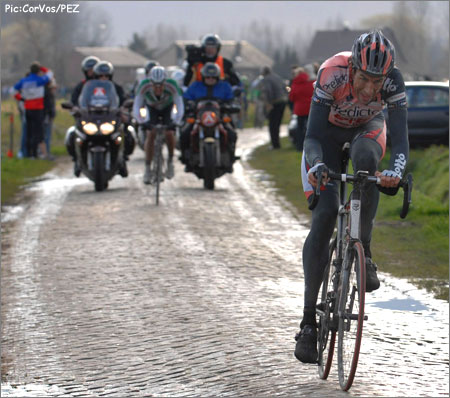 Roesems is coming back strong and the team has high hopes for him for the coming season.

PEZ: Bert?
Nico: I think I’ve made a very good choice in signing Bert Roesems as team captain – he’ll be rooming with Frank and he’ll be a great role model for the young guys.

He’s 35 and very experienced; he had a difficult return after that bad crash in the Vuelta in 2007, but he’s back to fitness now, very motivated and with a lot to prove. 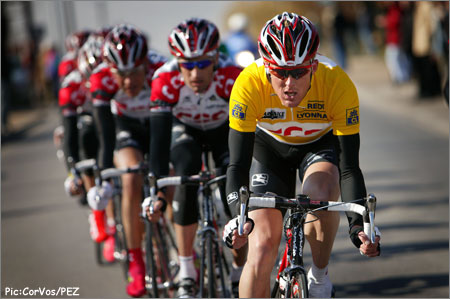 Remember when CSC used to pulverize the field at Paris-Nice?

PEZ: Jaksche?
Nico: That one isn’t up to me – that will be Simone Biasci of Cinelli’s decision, I’m looking after the Belgian and French side of the programme. 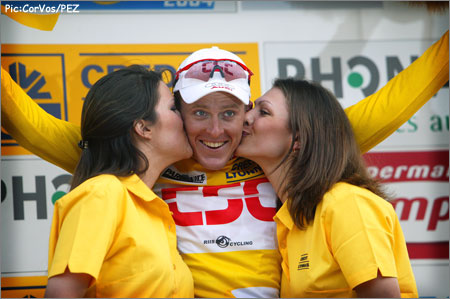 Jaksche has served his time, come clean, and looks to get a fresh start.

But Joerg Jaksche is a good rider, he’s doing five and six hours per day on the bike, at the moment – he’s very motivated.

He’s done his time; he deserves a second chance, why not? 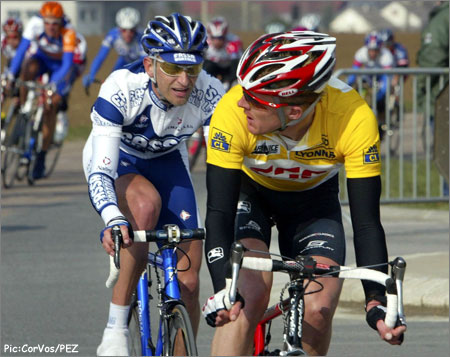 Hey, look at that, Jaksche and Vandenbroucke in the same picture.

PEZ: The squad programme?
Nico: We hope to start in Venezuela in January then it’s the Tour of the Mediterranean in February with the Kuurne at the end of February, then races like the Three days of Flanders.

We’ll get into UCI 1.1 races, but not Hors Categorie events.

PEZ: Your role?
Nico: I’m DS, I’ll be close to the young guys and I’ll try and keep Frank on the right track.

My job is to make sure all of the guys give the right image for Cinelli and our new Belgian sponsors.

PEZ: Do you have your soigneur and mechanic sorted out yet?
Nico: I haven’t confirmed anything yet, but I’ve been around cycling for twenty years, I know a lot of guys – I must have 30 calls looking for those jobs and I’ll make a decision soon. 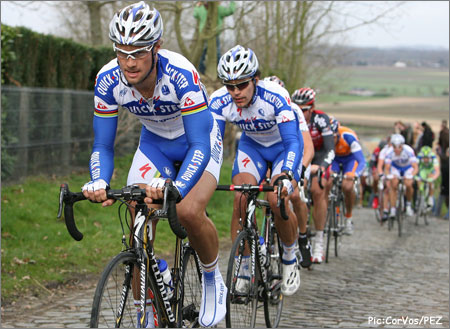 If Frank makes it to the starting line at KBK – he’ll thankfully only have the QuickStep juggernaut left to contend with.

PEZ: Goals?
Nico: If I get Frank to the start line at Kuurne, then that will be a victory for me.

I would like Frank to show well and I’d like the young guys to ride well in the semi-classics, not to win, but to ride well.

I’ll have done my job, if at the end of September, some of our young guys are moving-on to bigger teams and they say to me; “thank you for all you taught me, Nico.”

PEZ: And is Carlsberg still your favourite beer?
Nico: It’s OK, but Duvel is probably my favourite. But I haven’t drunk beer for a month; my weight has gone from 72/73 kilos when I raced, to 83 kilos – so now, I drink wine!

***
If only all cyclists and DS’s could be like Nico, the sport would be so much more interesting – we wish him all the best with his new job.