“Ed! Why don’t you interview any women?” Ed: It’s my image boss, kermesse kings, six day riders, unsung heroes… Richard: Do you still want to go to the Giro? Ed: How about Matt Brammeier’s girlfriend, she’s riding crosses in Belgium? Richard: That’s a good start! Nikki Harris has been a British champion on the road and a medallist in track World Cups; so what’s with the mud fixation?

PEZ: Well, Nikki?
Nikki: I started off when I was only 10 or 11, riding mountain bikes and cyclo-cross. When I was 16, I was preparing to ride the British ‘cross champs when Shane Sutton (head coach with the British Federation) approached me and asked if I wanted to ride a World Cup on the track – I got 5th in the scratch. After that I rode with British Cycling on the track and road. But at the moment there are a lot of young girls coming up through for the scratch and points, so they wanted me to go into pursuiting. That’s not for me, it’s not exciting enough! 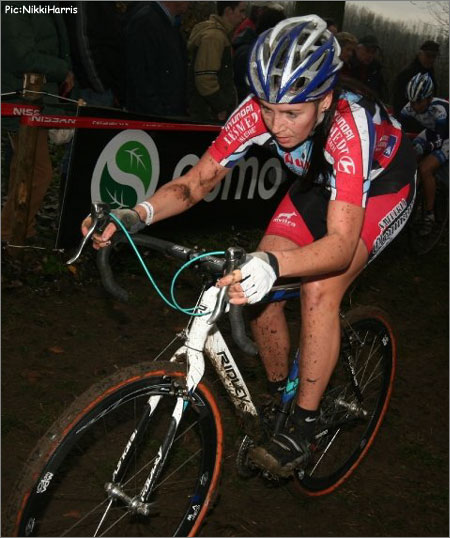 Nikki in action at the Aspere Gavere race.

PEZ: You’re living in Belgium, now.
Nikki: I’ve been based there for a couple of years, riding the road. This year I went over in March and stayed. I love it, everything is about cycling!

PEZ: How hard was it to get a team?
Nikki: British Cycling let me go in October and by then all the teams had a full roster. That meant I had to go with a smaller club team. It was good because it meant I had to do everything for myself – with BC it’s all done for you and maybe you get a bit too used to things being easy.

For next year I’ve got a ride with a bigger set-up, ‘Moving Ladies’ is a Dutch amateur team and they have a good road and ‘cross programme planned – but my main focus for 2009 is ‘cross.

PEZ: Do you get a bike from your team?
Nikki: Yes, bike and clothing. 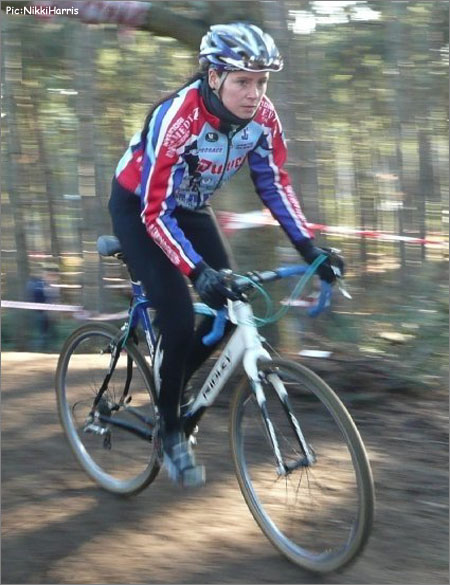 Nikki warming up at Averbode.

PEZ: What are the prize lists like?
Nikki: If it’s a UCI race then it’s decent money, but it goes to your federation and you get it at the end of the season. If you start to make a name for yourself, getting regular top 15-20 in UCI races then you’re looking at start money of around 200 euros.

PEZ: What are your strengths as a cross rider?
Nikki: Coming from mountain bikes, I’m tecnically good, for example through the woods, I have no problems if there are a lot of roots to negotiate. I need to work on my sand riding – there’s sand in just about every Belgian ‘cross. I also need to improve my dismounting and mounting. 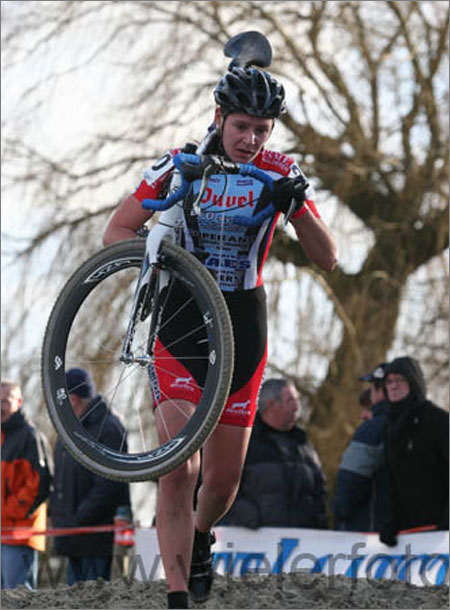 Nikki enjoying a little time on her feet at the Scheldecross.

PEZ: What’s your best result?
Nikki: I was second to Mirjam Melchers in a race in Holland and I was 10th in the UCI Scheldecross in Belgium. I have a World Cup at Zolder on Boxing Day (Nikki was 16th behind Marianne Vos of Holland)

PEZ: Do you have a role model?
Nikki: Hanka Kupfernagel (Germany) is a good all rounder, she can get a result on any kind of course. Some girls can only get on the podium if the course suits them, but she’s able to master any conditions.

PEZ: Will you ride a full road season?
Nikki: It’ll depend on whether I go to the Worlds Cross or not; if I do then I’ll ride the late season crosses before I have my break – that’ll be around three weeks and I’ll start on the road at the end of April.

PEZ: How are your folks – ‘cross isn’t really ‘girly!’
Nikki: They’re really supportive; my dad used to do moto-cross, then he got into mountain biking and ‘cross – that was how I got into the sport. 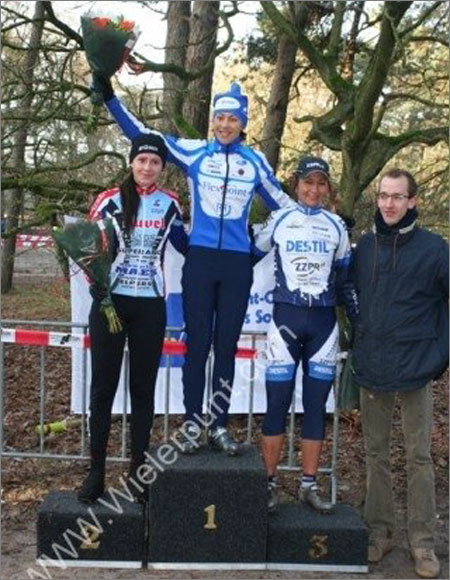 Nikki enjoying a little time on the podium with Mirjam Melchers and Reza Hormes at Amersfoort.

PEZ: I was looking at your website – I see you like a fruit beer!
Nikki: Er, yes, I have a bit of a soft spot for Belgian cherry beer!

PEZ: Christmas?
Nikki: I actually leave for Belgium after Xmas dinner – I have the Zolder ‘cross on Boxing Day.

***
That’s dedication for you! With thanks to Nikki and best wishes for the rest of the season.

Catching Up With Cervelo’s Dan Fleeman!