Olympic Rider Interview: From Deceuninck – Quick-Step’s top lead-out man to Olympic madison gold medalist, Michael Mørkøv is ‘the pro’s pro’. Ed Hood, who has known the Danish fast-man for many years, caught up Michael on his return from Tokyo to hear all about it. 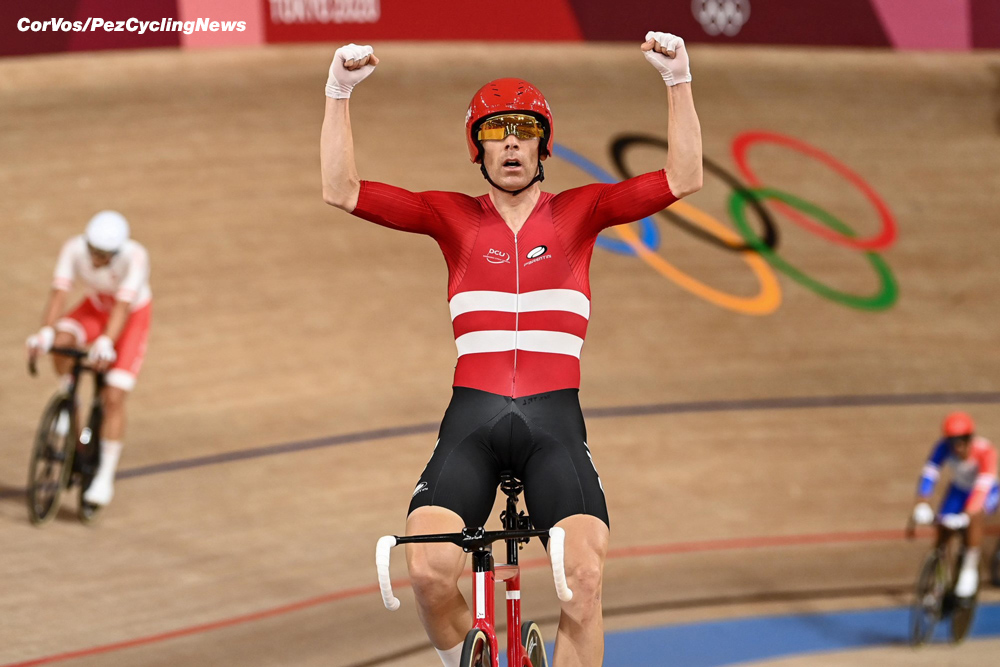 The palmarès websites tell us that Michael Mørkøv’s first title was the Danish Junior Points Race in 2003, since then the titles have come think and fast at National, European and World level on track and road. And now he’s added the title he’s coveted for years, the Olympic Madison.

In what many pundits describe as the best madison they’ve ever witnessed, Michael and the man with whom he won the world title in the discipline, Lasse Norman Hansen, beat the cream of the world’s track riders to the top of the podium. We caught up with the man after the Tour of Denmark, a race he went straight into after his return from Japan. 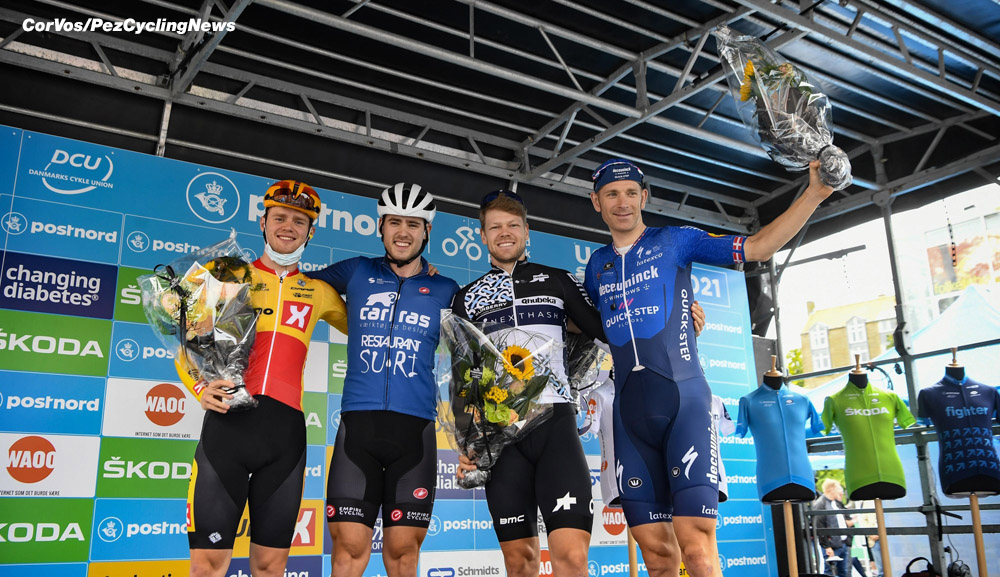 PEZ: Congratulations, Michael – how did you find the track ‘coup de pedale’ again after finishing le Tour?
Michael Mørkøv: I sent a lot of time on the track before the Tour and used the Tour as my main training workload. My recovery from the Tour was good, I had a good race; I was never really at my limit and was feeling fresh again within days of the finish. I did some work behind the Derny then joined the Danish track squad at our training camp at Ballerup Velodrome in Copenhagen.

PEZ: It’s a long journey to Japan from Denmark, any jet lag issues?
It wasn’t so bad, travel is as much a mental as a physical thing; we flew direct from Copenhagen to Tokyo with no transfers involved – Business Class so it was very comfortable. The trip took 11 hours but if you have to go to a race in Spain from Denmark, if there’s a transfer involved it can easily take that amount of time. The time difference was seven hours so that wasn’t so bad either. 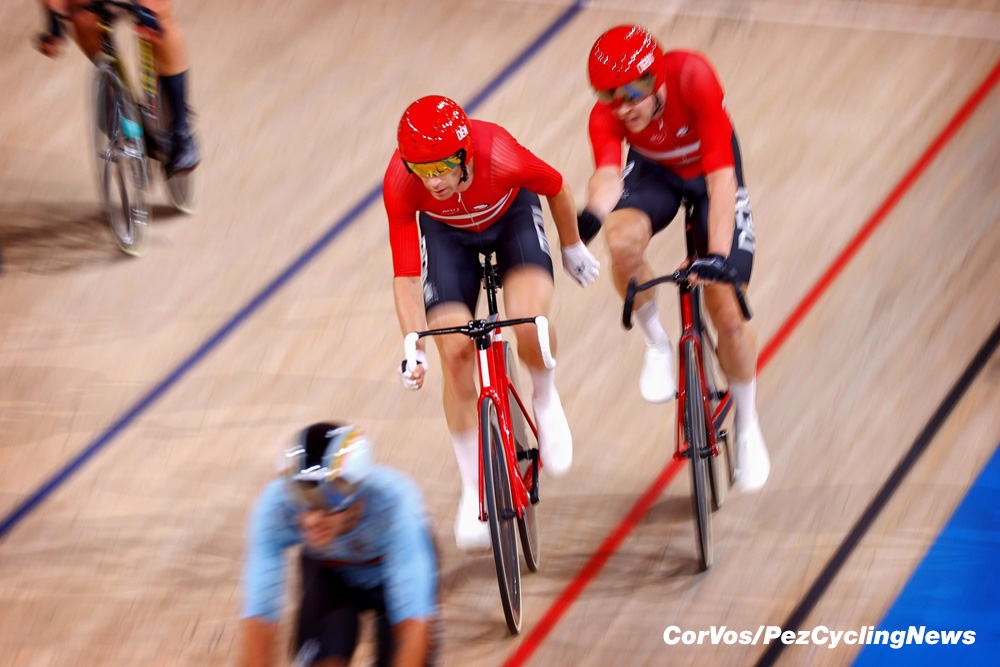 PEZ: Were you concerned that Lasse’s morale may have been negatively affected by the Danish team’s defeat in the team pursuit final?
Lasse is good at compartmentalising things, sure he would be disappointed but then he knew we had a very good chance of winning the madison. That gave him a chance to gain his revenge for the team pursuit defeat, an opportunity the other guys in that team didn’t get. Lasse is now one of a small, select band of Danes who have won five Olympic medals.

PEZ: What was your battle plan for the race?
We knew we had to be contesting the sprints from the start; as world champions we were the main favourites but we knew that everyone’s level steps up for the Olympics and we wouldn’t be able to dominate in the way we did at the Worlds. 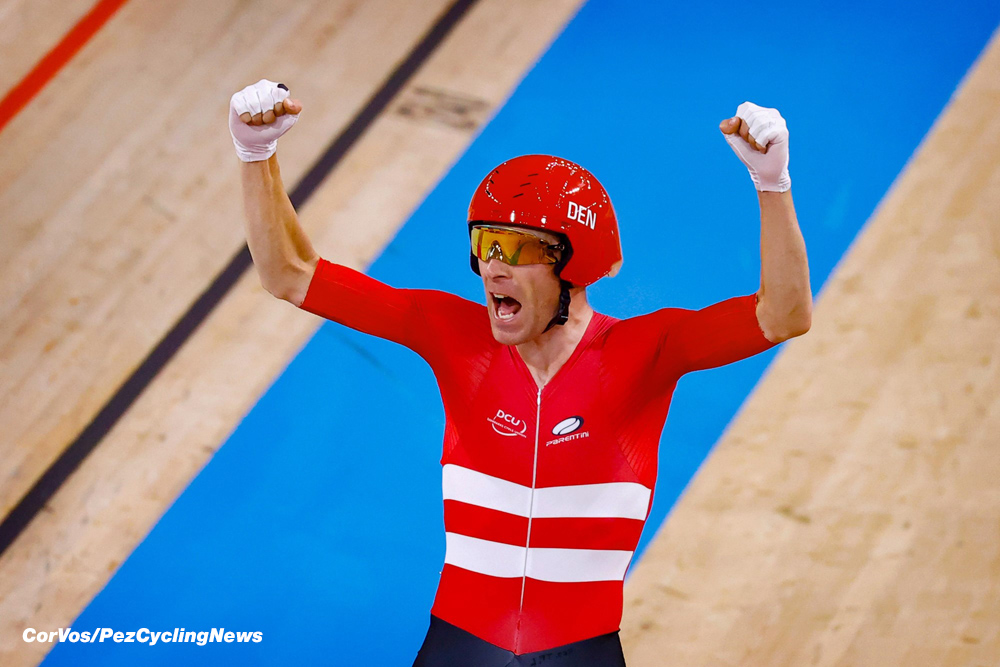 PEZ: The gears used in the madison are huge now.
Yes, I could see in the first sprints that there were guys on higher gears than me, it was hard to pass them but in the second half of the race you could see that the big gear was taking its toll on them. I’m old fashioned, I like to pedal, keep the cadence high and pedal on a lower gear. 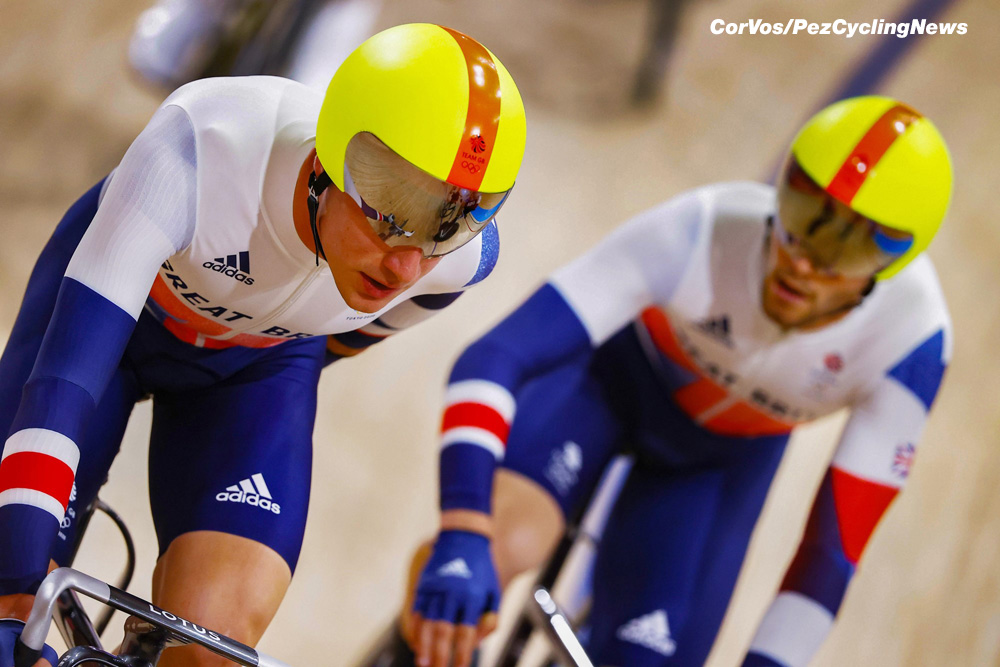 PEZ: Who did you mark down as the danger teams?
We knew GB would be strong, even though we’d never come up against Hayter and Walls riding as a team we’d raced against them when they had other partners. Walls has been riding at a good level on the road and of course, he won the Olympic Omnium with a very strong display. Hayter has been riding well on the road with wins in Coppi e Bartali, the Algarve and Ruta del Sol. We thought they would be the ones and that’s how it turned out. The French too, we knew they would be strong, Benjamin Thomas is one of the strongest track riders around and his partner Grondin very much rose to the occasion. 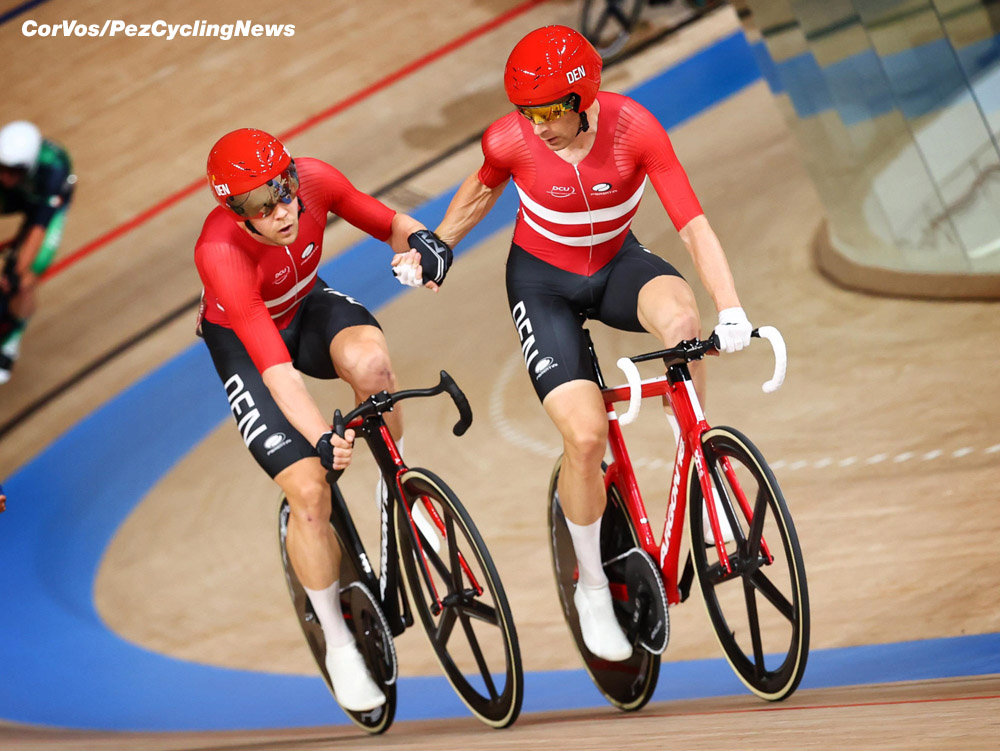 One of the best madison races ever

PEZ: Observers are saying it’s one of the best madisons they’ve ever witnessed.
The thing about madisons is that they don’t make great TV because you have to be trackside observing all the moves and keeping one eye on the scoreboard. But yes, it was a great race; modern madisons are more like points races now with ‘chases’ pretty much a thing of the past – we did 50K in 50 minutes, it’s hard to take a lap at that speed.

PEZ: Any nervous moments in the race?
No, I was calm and collected, focussed on the job. But in the days leading up to it I was very conscious that THE day was approaching, everything was going to be about those 50 kilometres. I knew that Lasse and I had a great chance, one we’d never have again – once in a life time. . . 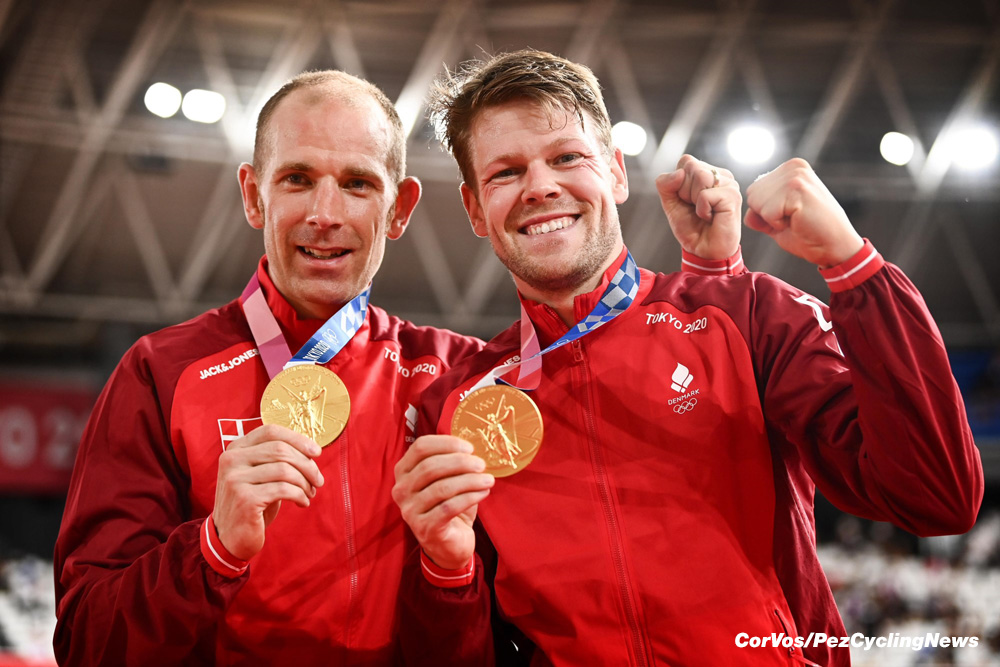 Gold medals for Hansen and Mørkøv

PEZ: What did you think of the track, it ran fast, didn’t it?
We saw that in the team pursuit, yes – very fast but of course at the Olympics everyone raises their game. I found the track very similar to my home track at Ballerup, Copenhagen so I felt comfortable on it right away. The tight corners make it ideal for very positive changes if you have good technique, you catapult out to the bankings. Not all tracks are like that, Manchester for example is flatter and not so easy for madisons.

PEZ: Some of the World Tour teams aren’t keen on their riders taking time off to train and compete on the track?
MM: I’m really proud of the team, they really supported me I pursuit of my dream, there were no doubts at all. Having said that, when I signed my contract for 2019/2020 I made it clear that whilst I didn’t try to negotiate my salary I had to be given freedom for the Olympics. Patrick Lefevere agreed, the directors all respected my ambitions and the staff were very supportive. 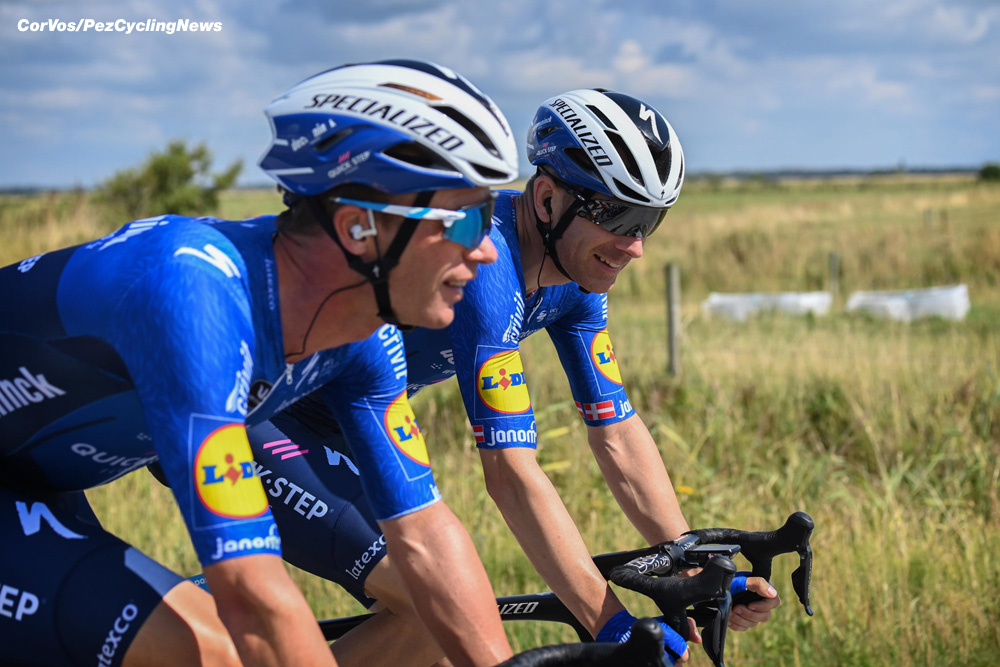 Keisse and Mørkøv in Denmark

PEZ: No rest for the wicked, straight from Tokyo to the Tour of Denmark.
Yes, straight from my track campaign back to my day job! The team didn’t push me to ride it, I wanted to ride, it’s six seasons since I last rode, after the Olympics it was like a huge lap of honour for Lasse and I.

PEZ: How has the reaction to your win been?
Extraordinary, I’m over the moon about the reception I’ve received, my friends, family and neighbours had a surprise party for me and the Danish fans have made Lasse and I feel so special. Denmark only won 11 medals, with three golds in Tokyo so our win was well publicised and received. 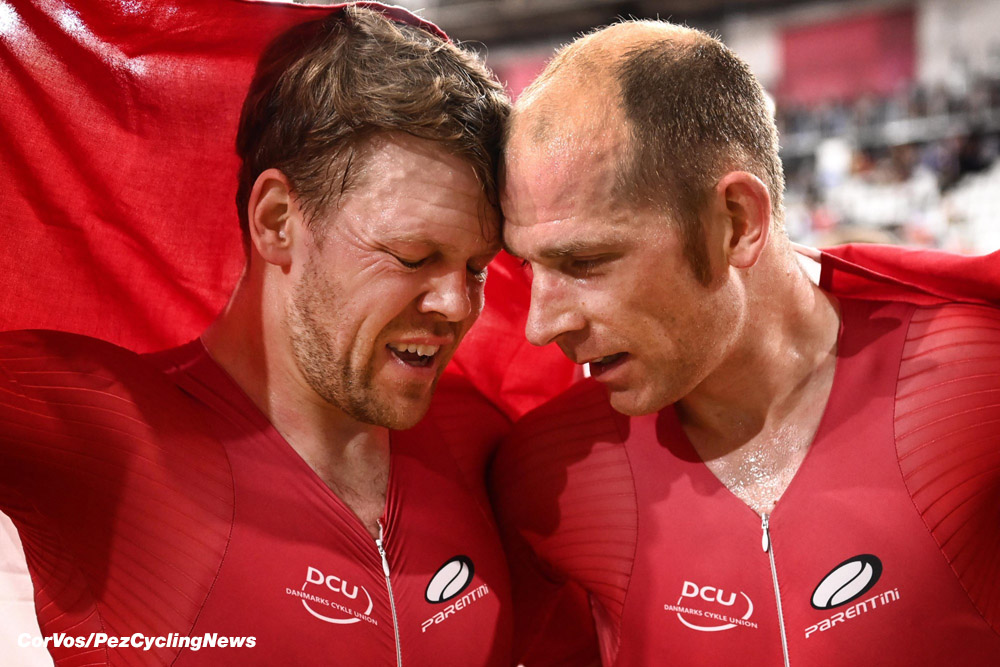 PEZ: Are the Worlds on your agenda?
I’m in the pool for a ride in the road Worlds in Flanders but competition is stiff with eight spots to fill from the 14 riders in the selection. The track Worlds come one month later and Lasse and I intend to defend our madison world title on the boards of the Stab Velodrome in Roubaix. I’ve never ridden on it but have heard it’s a nice track.

PEZ: What’s still on the MM ‘to do’ list?
That’s a big question – once you get Olympic gold you can’t get much higher. I still love riding my bike and the fact that I’m getting better, I enjoy my work as a lead out man and next year it’ll be a dream come true to ride the Tour de France which starts in my home city of Copenhagen. 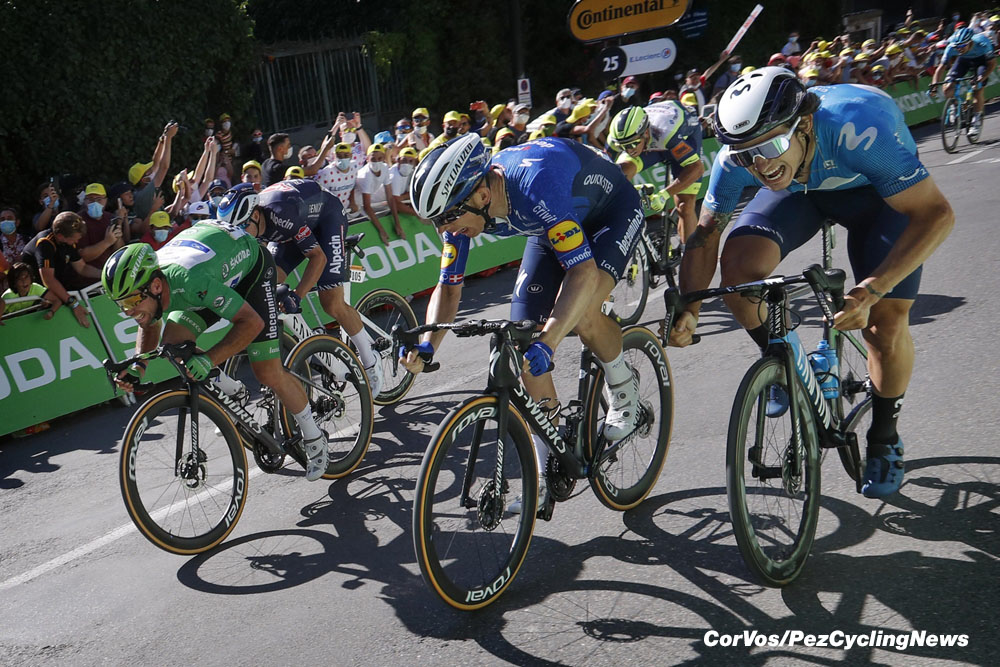 Sprinting with Cav in the Tour de France stage 13