Roubaix’99 Winner Interview: Andrea Tafi won Paris-Roubaix in 1999, but it was no surprise. The Northern cobbles are in his Tuscan blood with second, third, fifth and tenth places during his career. Robin Morton spoke to Andrea about his win and riding gravel in the US. 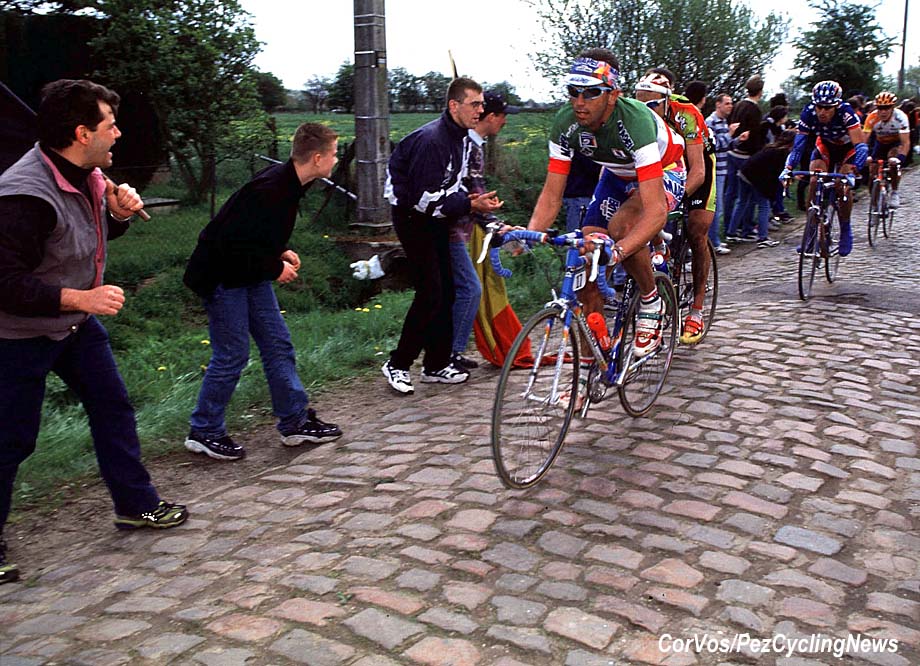 Tafi making it hard for the others

Can you tell us a little about riding Paris Roubaix-what was it like to win solo?
It’s something that stays with you forever. To finish in the mythical velodrome of Roubaix, with all the fans cheering is simply unforgettable. When I won in ’99, the memories are just beautiful. The win solo at Roubaix with the Italian champion’s jersey, with all the accolades that followed, it was just a huge deal. Even today, I get goosebumps thinking about it! It was such a special moment for me, but it’s hard to explain to people just what my experience was like. When you win a so-called “Monument” race, you enter into the history of cycling, which is a huge honor for ever. 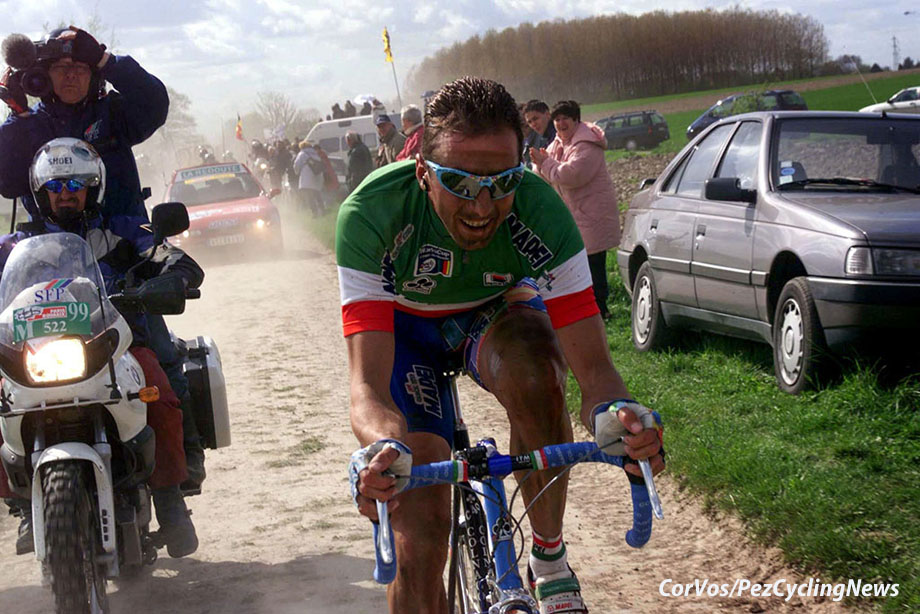 Which was better winning alone or with your teammates (1,2,3) Ballerini and Peters?
First let’s remember 1998, when I was second behind my friend Franco Ballerini. That was a great ride by Franco, even if Museeuw crashed and broke his leg in Arenberg. In 1996, that was my first big ride at Roubaix. It was the 100th anniversary edition of Paris–Roubaix. I just have unforgettable memories of that day. It was a really fast race that day. (43.31 km/h average speed).

Four of us (Ballerini, Bortolami, Tafi and Museeuw: all Mapei-GB) broke away with a long way to the finish, but Ballerini punctured so there were only three of us left. It was the first time I had such an important result in such a big race, and it was a key for me to understand how I could become a great rider. Maybe I could have had a better result that day and in general, but I was part of a great team so it was the team tactics that made the difference. And what a team (Mapei) was! What a team! 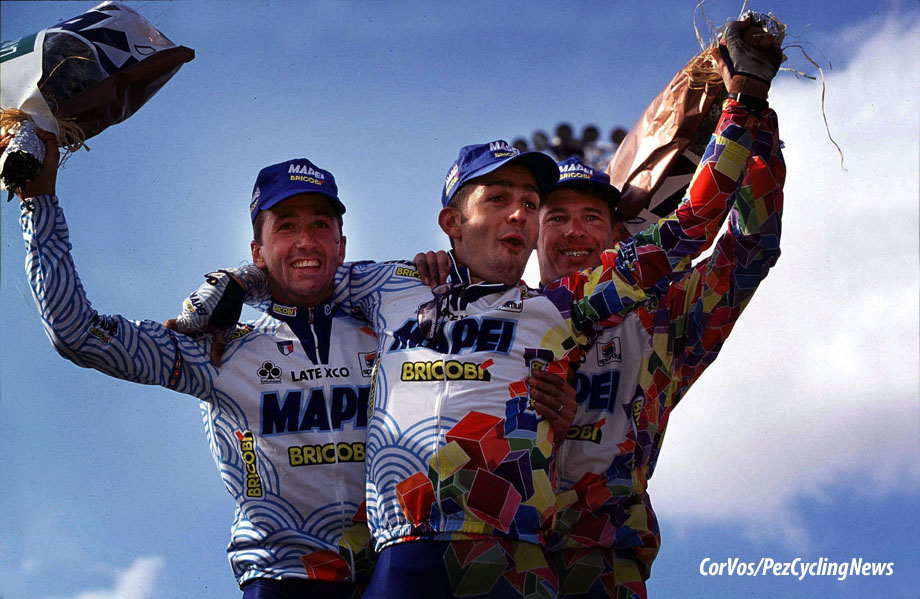 Three on the podium

Even today, the Mapei team is mythical.
Mapei was a team that even so many years later, the reputation and story has grown. It was a really great team! In those days, there were a lot of really good teams, even Italian teams. Today, there is not much going on with Italian teams, so for cycling fans, Mapei has gained in stature. 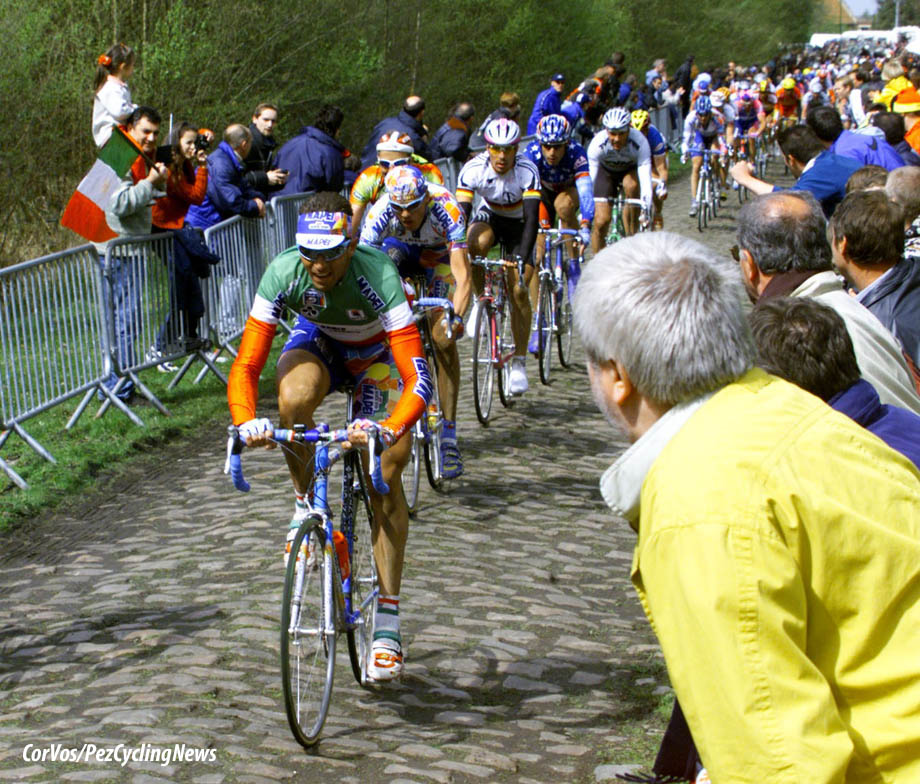 You are coming back to the US – in the Philly area. What are your memories of racing in the US PRO Champ Series?
My first race in the USA was the 1989 Tour de Trump. Did you remember that? I was on the Eurocar-Galli team with John Eustice. On my first visit to the US, I was taken by how big everything was; the roads, the race courses and vistas, the cars and even how much food we were served in the team meals! Plus it was great to find out how friendly all the fans were; asking for photos and autographs in a really nice way. As a neo-pro it was really special and nice and since the first time I always loved racing in the US.

Then I raced in 1990 in the Tour of Americas in Florida and Puerto Rico, where I won a stage in Fort Lauderdale and Puerto Rico which was very cool as I like the latin vibes there. Then I raced in Philadelphia race series; for me, those races were fantastic for the great fans and atmosphere in the city, plus there were a few stretched of cobblestones. I raced in Trento and Lancaster as well; races with a fantastic organization from my friend Robin Morton and Alice Armstrong and their team. These are really great memories for me, racing with Greg LeMond and Lance and other American riders like Freddie Rodriguez.

Don’t forget I finish my racing career at the Tour De Georgia in 2005. That was a special moment for me as well with all the fans and I was selected as most combative rider that day. So for me, racing in the States, coming to the States has always been a special pleasure. 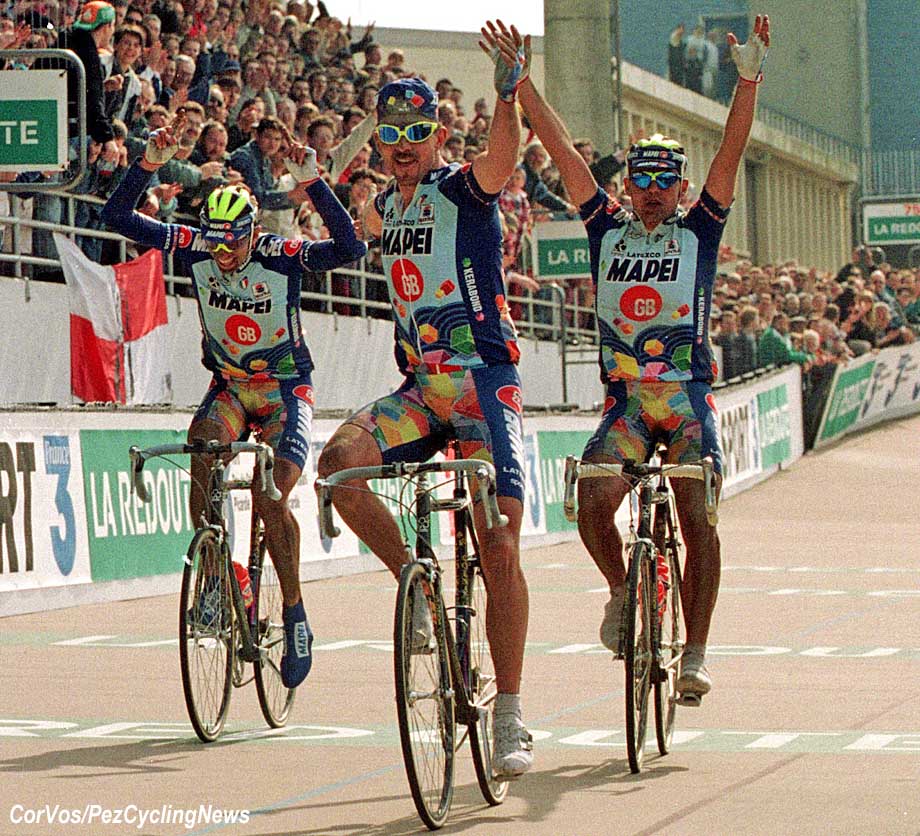 People are excited to hear you are doing a gravel event in the US. You have a lot of fans still. What is the main attraction for you riding the Rock N Road Gravel Series?
Well, I know about riding on gravel, because I’ve ridden on the Strade Bianche in Tuscany before. Last winter I was talking to Vicenzo Nibali and we were both interested in riding gravel. It’s something new, something different in cycling, so it’s interesting to try. The Rock N Road Gravel will be my first actual gravel event but when my friend Robin Morton invited me to ride, I was excited like a little kid to do something different. It was a surprise, but a positive one. I know I’ll enjoy the Rock N Road Gravel and don’t forget that cycling is a sport that is fun and good for your health. Even at 53 years of age, I still love the bike. I still have the desire to go out and train, to pedal, to suffer so afterwards, I feel great. Maybe these gravel events will bring new people into the sport of cycling who want to try new things. 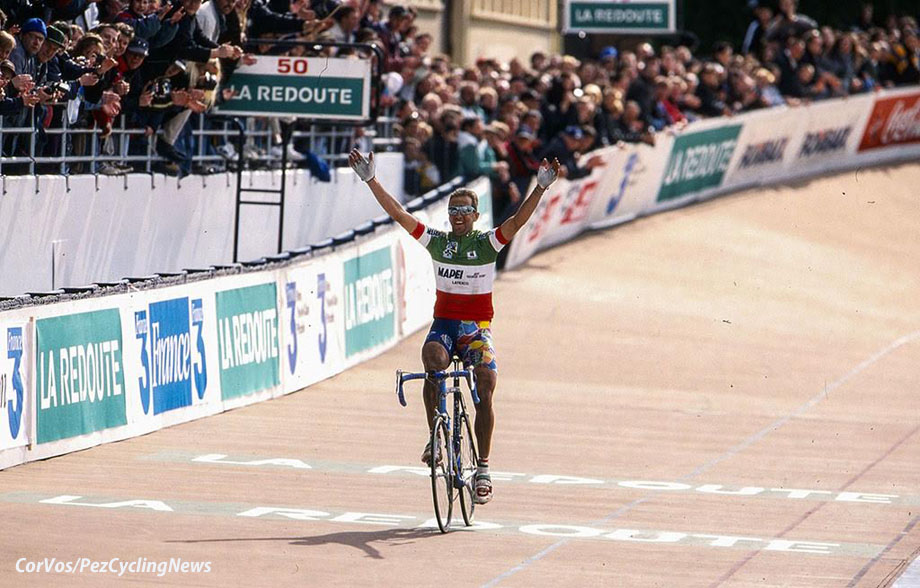 Solo in the velodrome

Maybe some of the people riding in the Rock N Road event would be interested in coming to your Borghetto. What are some things you offer?
Il Borghetto di Andrea Tafi is a unique place; it’s in Lamporecchio, my hometown in Tuscany but it’s a hidden oasis in the hills behind the town, surrounded by nature at the foot of the Montalbano hills, in a beautiful Tuscan landscape full of olive and cypress trees. I found the property while mountain biking one winter 20 years ago and it was just abandoned, overgrown buildings that were originally a small farm. 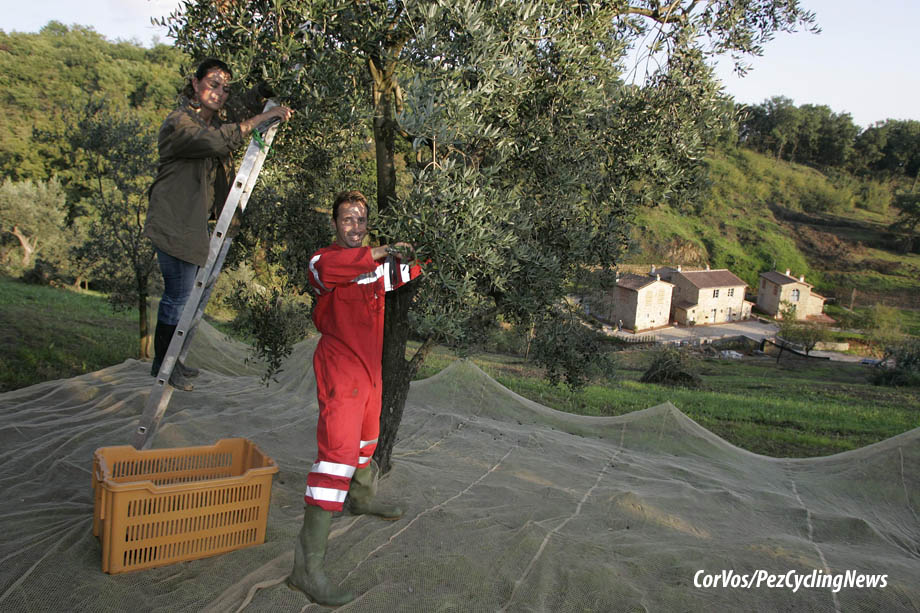 Picking olives at home in Tuscany

We restored and renovated it over the years and now after over ten years of activity, we get visitors from all over the world. Many Italians come, as do Belgians and Danes, plus British. Plenty of cyclists come as they know me from racing, but others come for the beautiful, peaceful surroundings in Tuscany and nice swimming pool. Sometimes I ride with the guests if I have time. ‘Il Borghetto’ means little village in Italian and we have six apartments named after my big wins in the restored buildings. We have a website and are on all the major holiday booking sites. My wife Gloria and I run Il Borghetto and you are welcome to visit us any time! 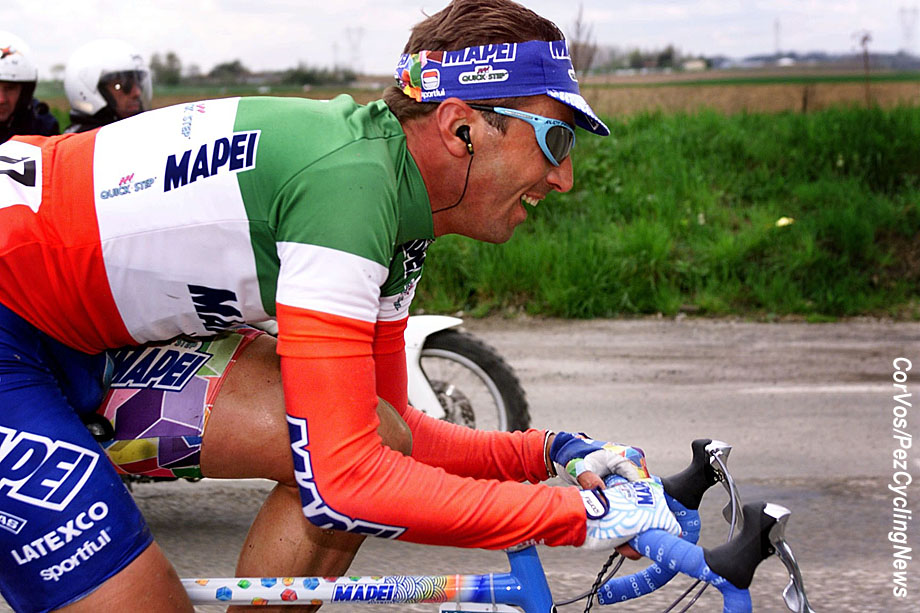