Rolf Aldag presided over one of the most successful seasons of recent times as the High Road/Columbia men’s squad racked up a staggering 85 wins last year. 2009 has started off with a national title Down Under and Mark Cavendish looks faster than ever. So what does the Columbia chief see for the year ahead?

When Pez chatted to Rolf at the team training camp in Mallorca, we found him in a candid and passionate mood. Here’s what he had to say.

Pez: What would make 2009 better than 2008?
Rolf: Winning six stages of the Tour de France?! No, it’s very, very hard to top [last year]. I think the focus shifts a little bit in terms of having the top athletes in all races and winning a lot …. now, what I think is the natural thing to do is focus on the main events. 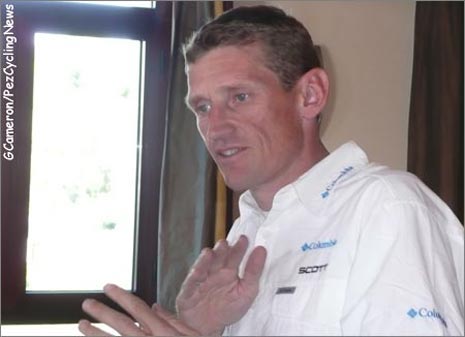 It’s very nice that Cavendish wins West Flanders, it’s very nice that he wins a big number of races. But it’s in the team interest now to bring him at 100% to the Tour. You can never say he’s going to win four stages again or five stages. You have to make sure he’s not killing himself in advance.

That doesn’t mean we’re not competitive in other races, we still want to win there. But if you see how much talent we have, young riders like Tony Martin and Edvald Boasson Hagen, if you see those riders, I think they are ready in 2009 to take over those wins.

I don’t think we will automatically drop down to 18 wins because Cav and Griepel only focus on main events and we don’t win as much.

Pez: And what about Cavendish … can he go from being a sprinter to winning Paris-Roubaix, for instance?
Rolf: Maybe one day … but it’s kind of risky to put big, big expectations on what he might be able to achieve. Mostly, it goes slightly wrong. One example where it all turned out very well was Laurent Jalabert – he was sprinting, won the green jersey, and he ended up as a GC rider, winning Classics, winning mountains jerseys.

Everyone in cycling who is a winner has ‘an ego’ – but they always struggle with the fact that they’re not good in certain things. Then they put a lot of effort into those things to become better … that also means that they lose a little where they’re strong. They’re not these ‘experts’ anymore. 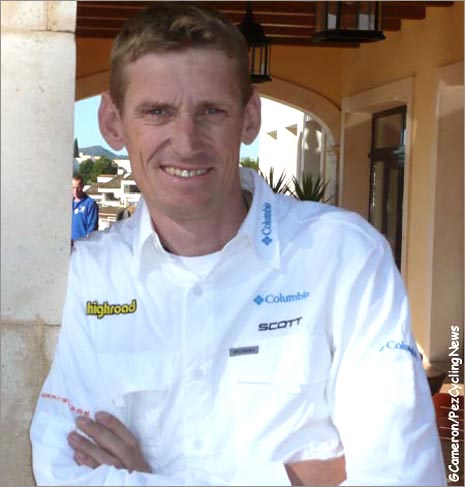 And that’s kind of dangerous in my view, to shift the focus from one thing to another [that’s] completely different. Step-by step … first step [for Cav] was going to the Tour, learning about it, getting totally beat-up and exhausted, frustrated.

This year, (2008) winning four stages, and when the time was right dropping out of the Tour and refocusing on other objectives.

Next year, it’s not automatically: “Win six stages, get green jersey, win the last stage in Paris”. The logical thing for me is to try and win some stages and see where we’re at with the points, see how it goes … nothing beyond that. We have to arrive in Paris, that’s the next step.

I find it so strange that you have young talents coming up and people say: “He’s going to win the Tour in five years.” Nobody knows that.

For a rider, if he measures himself and says “Armstrong won the Tour seven times, this is where I have to be in five years,” so many people would struggle with that. 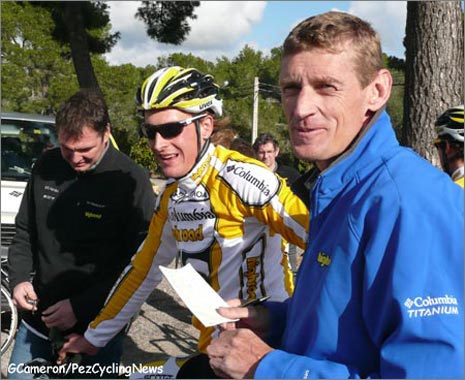 Mark is mentally very strong, he’s super-professional and he has his own goals so there is really no need to put extra pressure on him. We’re not going to say: “OK, fine, you’re a good sprinter – now show us you can win Paris-Roubaix.”

Pez: Hincapie’s been trying to win Paris-Roubaix for years!
Rolf: Yeah! I still think George has the chance to do it. It’s still his goal. George is old enough to judge on realistic possibilities to win it. He’s not going to shoot himself if he’s not going to win, but I’m sure he’ll be ready.

But you know how Paris-Roubaix goes … you just can’t say “I go there and I win!” One flat tyre at the wrong moment, and it’s done, it’s over, even if you’re 10% better than the group. He had bad luck in 2008 so let’s hope he gets more luck this year.

Pez: About the new kit … the yellow and white is to symbolise a cleaner approach. Do you think that the way Columbia, Garmin, SaxoBank and so on are working means people are finally waking up to the right way to do things?
Rolf: I think you see clear direction in cycling now. Definitely, the understanding of how to do things has changed.

It’s not to leave people out there alone and expect big results without supporting them. It’s not like: “These are the riders, this is management,” and we draw the line there.

If you see the success of Garmin in the TTT, see how much they invested in winning that at the Giro, it was a huge success for them. That was all done because they were very focussed and worked in a good direction. People will try to copy those things … “What is Garmin doing there? What’s Columbia doing with this?”

We do this, too. We look around the peloton to see what other teams like Garmin might be doing better than us, or SaxoBank.

Pez: So it’s about being open?
Rolf: Cycling was always very traditional. If Greg Lemond hadn’t won the Tour de France with his triathlon handlebars, we’d still be grabbing the bars on the outside!!

There are some possibilities to make people better … 1% here, 0.5% there. That’s what makes the difference, because the level on all the teams is so high. How do get over that bar to win? I think that’s the only way to do it, actually. Little improvements.

Pez: Being in a team that has this approach, that has made a stance against doping, does it upset you that some people still just blanket criticise cycling and say: “Everybody’s cheating”?
Rolf: Well, that’s definitely a bad thing. Honestly …. I earned my part of that, definitely. I have to live with it, and I live with it. But I really feel sorry for the young guys. They did nothing wrong, and they’re really on the right path. 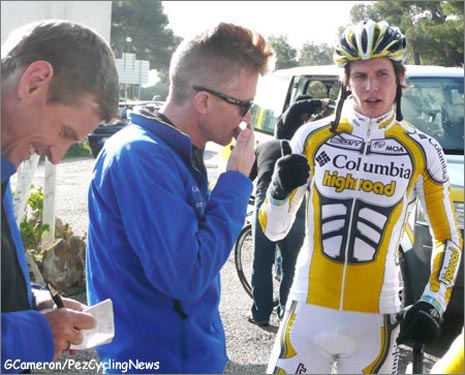 Cycling is just the greatest sport in the world. It’s nice to go out on the bike and discover the country. I definitely prefer that than having my kids playing pool or whatever and drinking two bottles of beer while they do that.

Riding your bike is healthy, it sends the oxygen to the brain and it gives you a lot of time to think.

It can never be cycling [that’s wrong] … it’s different people that make the mistakes. If they don’t learn this, it’s over. They have to understand this. There must be zero tolerance.

All over the world, in business, in social life, whatever, there are good and bad people everywhere. I think cycling definitely needs and deserves another chance because it is a great sport.

Sometimes, you speak to people – whether in cycling or just generally – and you just know you’re being spun a line, but my experience of speaking to Rolf in Majorca left me feeling a lot more hopeful for the future of our sport. This is a guy who acknowledges his mistakes and the part he played in creating cycling’s bad rep.

I left with the feeling that he is genuine about his belief in a new, better way forward, and let’s just hope that everyone else who talks about ‘transparency’ also subscribes to this …… otherwise it really will be all over.

With thanks to Rolf Aldag for his time and his openness and to Kristy Scrymgeour for setting us the interview.

PEZ Tech: Made In Gaerne!