Every year, a crop of hopefuls gets a taste of the big time. A stagiare contract offers a couple of months to mix with the big boys and show whether you have the goods to ‘make it’. It’s sometimes said that the further you travel to make your dreams a reality, the harder you’ll try. Israel’s Ran Margaliot is a very determined young guy.

It’s no ordinary ‘kid-gets-into-biking, kid-gets-good, kid-gets-breaks, kid-turns-pro’ fairy tale for Ran Margaliot. There’s so much of a back story with a guy who fits his training around his national military service in a country with virtually zero pro cycling history that one interview will barely scratch the surface.

Now, with an active start in the Tre Valli Varesine under his belt as he rides out this season in the colors of Footon-Servetto, the 22-year old is aiming for the Pro Tour in 2011. Pez caught up with Ran as he prepared a tuna salad with rice – the exciting dinner of a pro! – and he filled us in on his background. It’s a fascinating story. Ladies and gentlemen, meet Ran Margaliot. 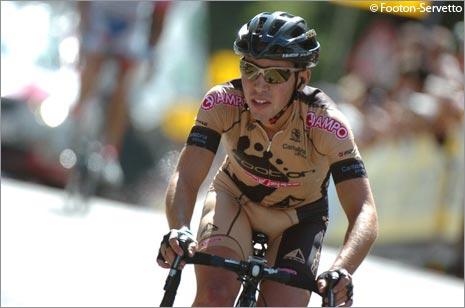 Ran Margaliot: I started cycling as a 12-year old ‘chubby’ boy! In Israel, we don’t really have competitive cycling, no tradition of racing. In Israel, there has only really been one professional rider, Yehuda Gershoni, who rode with Sean Kelly for the Skil-Sem team in the 1980s. He was exceptional … there was no other cyclist that was even close to the top level.

At the age of 15 I was watching the Tour on TV, dreaming. You know, ‘one day, maybe I’ll be there’ … but it wasn’t practical. I realized that in order to develop my skills I would have to go to Europe. My father always remembers that one day I stood in the middle of the salon and said: “OK Dad, I’m going to look for a team in Europe!” And he said: “OK, you go!”

Two weeks later, I applied to Belgium, and I was accepted by Jo Van Gossum, the manager of the Performance Cycling Team, even though I had no results outside Israel. I was the national junior champion, but that was it. The first race I did in Europe was a World Cup race in Liege, I think I was dropped after 10kms, so not a good experience!

Since then, I developed my skills a little bit. I always flew to Belgium in the summer vacation to ride there, until 2007.

In Israel, on reaching the age of 18, I’m not sure if you know that every guy has to go into the army? That was 2007 for me. Everything kind of stopped because of that. I did the boot camp in March and the army course lasted until late May. I couldn’t train at all, I used to go for a run at night, but my plans for being a professional cyclist were almost ruined. 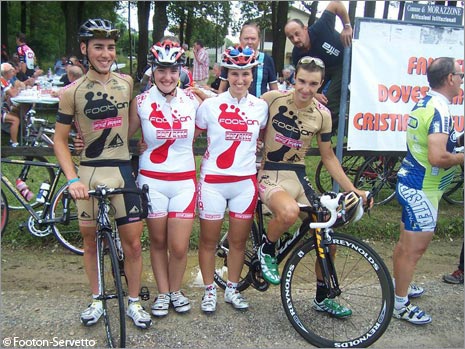 Then I knew an ex-pro rider called Massimiliano Lelli (Giro d’Italia stage winner and Italian TT champion). I knew him through a mutual friend, and he tested me in Tuscany and said: “OK, this guy has potential.”

He spoke with Mauro Gianetti, then manager of Saunier-Duval, and he invited me to his team in 2008. I got a special vacation from the army, time out that I’m now completing! I flew to Spain and did the entire season with the Saunier-Duval under-23 team.

That was the first time I realized what being a cyclist is. I was living in the team apartment, doing stage races … Spain is the ‘hardcore’ of racing for amateurs. There, and Italy, is the highest level you can find outside the professionals. Most of the guys riding for Footon-Servetto now were team-mates then.

Then, 2009, I got another permission from the army to go to Europe … it was much more complicated!

You have to understand that in Israel everyone has to do the army service, three years for guys, two years for women. When I requested to go to Europe, they agreed but that doesn’t mean that they ‘cancelled’ those months! They’re still counting it and I have to complete the time each time I go back. I’ve been three-and-a-half years in the army already … I’m still completing my training!

I’m not in the middle of a conflict. I work six hours a day in the office, but, still, I have to calculate my flights to Europe very carefully. I cannot waste any time.

Pez: So your days in Israel are devoted to fulfilling your period with the army …
Ran Margaliot: I have a special dispensation that allows me to train in the mornings. I work six hours a day. I can live at home. I don’t have to travel to other countries to train. We have nice weather, good roads. I go training in the Jerusalem mountains. 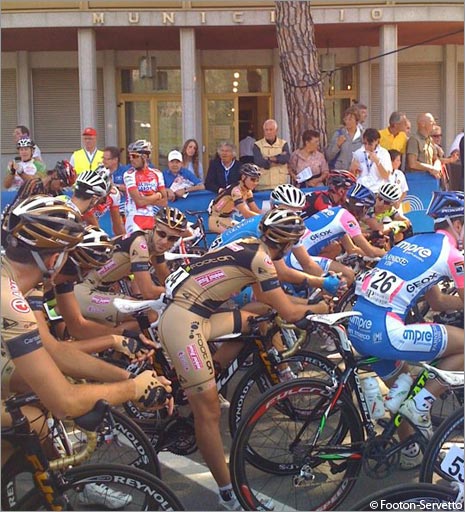 Pez: Tell us about 2009 …
Ran Margaliot: I was in the Footon-Servetto under-23 set-up. Mauro Gianetti was taking care of us. In Spain, we had a problem in that there were four foreign riders in the team, and the rules said that only two foreigners could ride each Under-23 race. Mauro invited me to his home in Switzerland to prepare for the European Championships, and he helped to look for races for me. Maybe other riders in my situation would just have given up.

Pez: So you’ve been really lucky. The people you’ve met have helped you along the way …
Ran Margaliot: I think it’s more than just being ‘lucky’. I’m lucky to have such a good connection with them. It’s more than interest, they really identified with my story, the things I’ve been through. I get huge support from the entire Israeli crowd, as well as from the Israeli Cycling Federation who are doing the best they can to help me. What helped the most was that this year, after my results last year, I was accepted to ride in the UCI’s World Cycling Center programme.

It’s more than just a development programme. The project is being financed by the Olympic Solidarity Committee … they teach you more or less everything. One day we were talking about the team tactics we would have chosen if we were team directeurs in the Amstel Gold Race; the next day we were learning how to fix a flat tyre!

You meet people who maybe don’t have the same experiences as you but are passionate about, and committed to, cycling, from countries like Burkina Faso, Eritrea. They all want to be professional cyclists. Everyone was as committed as I was. Those months were really good for me. 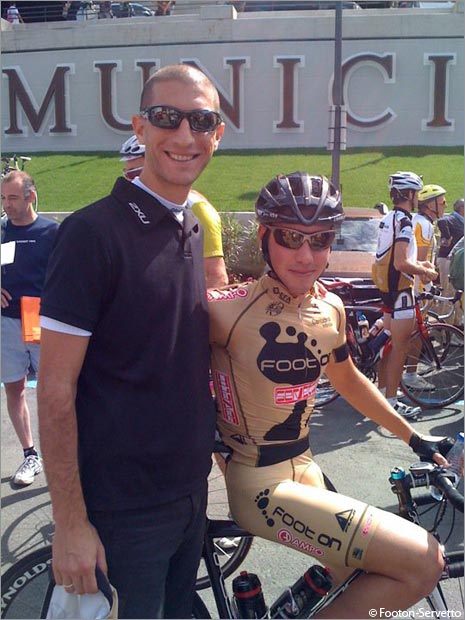 Ran with Israeli national team coach David Reznick, a big influence on his development as a rider.

Pez: How did that manifest itself?
Ran Margaliot: I won the Tour de Israel with my mate Niv Libner – it’s a stage race for duos, a bit like the Trans-Alp in Europe; I won the Under-23 title; I had some nice results in Switzerland. What really helped was the belief of Mauro in me. He said to me that maybe I could have even better results if I could have the chance to be here all year long and put all my energy into racing instead of traveling to Israel and back, being in the army … You ever go training in 45є Celsius?

Pez: Nope! I’d struggle to function at all in 45є Celsius!!
Ran Margaliot: It’s not so nice! I did that last week … so I’ve been lucky to be with people who believe in me, and I hope I can do it not only for myself, but to stress how grateful I am that they are on my side.

Pez: Now you have the opportunity to ride pro races with Footon-Servetto …
Ran Margaliot: Yes, I start with the Tre Valli Varesine, then two days later the Coppa Bernocchi. Maybe I’ll ride some other semi-Classics in Italy later.

Pez: So is it ‘now-or-never’ for a pro contract or can you wait another season?
Ran Margaliot: I hope to be a professional rider next year. It is time for me, in all terms. I’m in my last year at Under-23, and in cycling there is a certain age that you have to make that move [up] … otherwise it’s too late. Now, I present what I am now and what I can be. But at the moment, I’m not thinking about it. I’ll be doing my first pro races very soon, I’m really happy for the opportunity, but I know that the job starts now. 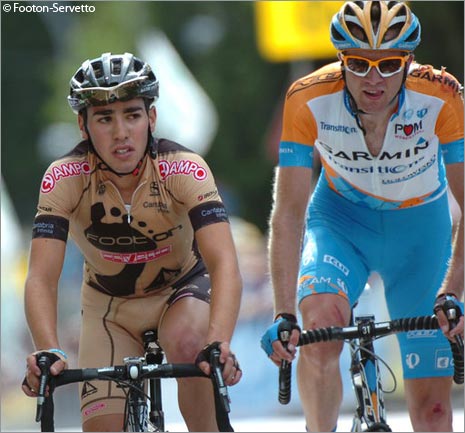 Ran Margaliot gets down to business alongside Garmin-Transitions’ TdF stand-out Ryder Hesjedal.

Pez: It’s a job, a way of life, but it sounds like you’ve already learned so much from riding …
Ran Margaliot: I’m lucky to do cycling for the reasons I do it … I choose it 120%, not any less. I learn a lot about languages and cultures. I speak English, Hebrew, Spanish and Italian. I understand a bit of Dutch but I can’t say I speak it!

Cycling is the center of my life, but I also love to read. I play the guitar a bit as well. I have a Fender, but that’s at home in Israel. Maybe I need a ‘European’ guitar!

Pez: So, you’re now in Europe?
Ran Margaliot: Right now, I’m in Saint Bernardino, Switzerland, but I’m considering where to base myself for next year. I tried to explain to a friend in Israel that being a professional cyclist is like being an independent person employed by a company, and your job is to arrive ready to race. They don’t really tell you where to live … there are a lot of Americans in Gerona, a lot of Australians in Varese.

Maybe I will look to base myself in north Italy or the Italian part of Switzerland, which is close to where the team will be. It’s good for training and races and there are some really top professionals like Cadel Evans and Fredrik Kessiakoff living nearby.

Pez: What sort of a rider are you?
Ran Margaliot: Good question. I’m definitely not a sprinter, something between an all-rounder and a climber as I’m only 57 kilos and 1.71m tall, so I won’t be the next Mark Cavendish!

I like the long climbs. I’m really learning everything. I may speak about big aims, getting to the Tour de France, but I’m really starting from zero. I had no-one who went before me that I could learn from. We have some good MTB riders in Israel, but not really on the road.

I’m really happy to be with a team like Footon-Servetto, as I can show myself as committed to the team and show what I’m good at.

Pez: Will integrating be easier as you know the set-up?
Ran Margaliot: I know most of the guys already, the directeurs. I’m familiar with the team sponsors who came to Israel for a cycling vacation last year. I’m happy that they think that I’m at a level to perform in these races, but now it’s up to me to show it and prove that the trust and money they have invested in me wasn’t for nothing.

It was fascinating to speak to Ran, a rider with a very different background to most making their way in the European peloton. Focused, diligent, intelligent and a nice guy to boot. We wish him – and the other Pro Tour stagiares – well until the end of the season, and hopefully we’ll be mentioning him in dispatches in big race reports next year.

Toolbox: The Other Side of Competition