The cheer from the cabin next door to ours – below the Grenoble velodrome – told us that the result Flanders had been holding its breath for, had arrived. The positif in the 2008 Gent Six Day race from Belgium’s number one Six Day man, Iljo Keisse, has been dismissed on the grounds of ‘insufficient evidence.’ “Cathine was not found in the ‘B’ sample and HCT was there in quantities so small as to have no effect on performance.” Pez was granted the first face to face interview with Iljo, after the result was announced.

PEZ: Iljo, thank you for talking to us, you must be a happy man, today.
Iljo: Very happy!

PEZ: Grenoble, a special six for you?
Iljo: Yes, it was here I had my first winter six victory, I won Fiorenzola before Grenoble, but that’s a summer six. Grenoble is a special six for everyone, the points system here is different to other sixes, the number of points you get dictates how much money you win, so the smaller races like the scratch and devils are much more important because of this. And it’s a 210 metre track but with only 11 teams, that tends to show the difference more between the big teams and the smaller teams. 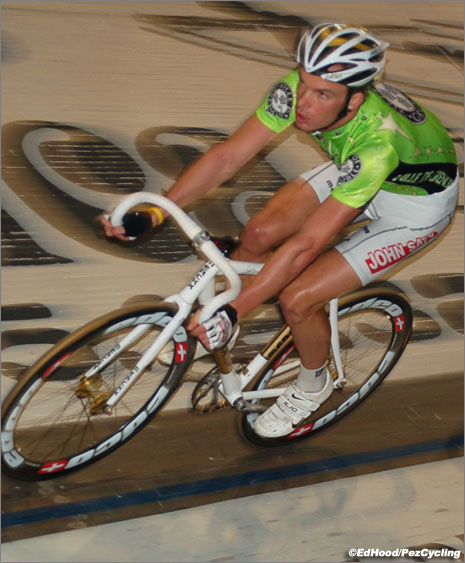 Iljo is in action right now in Grenoble.

PEZ: Your partner, Gianni Meersman, his first six.
Iljo: Yes, it’s around five years since he last rode the track; he’s been pursuing a road career – first with Discovery and now with Francaise des Jeux. But he had good results on the track when he was young. It’s no problem for me to ride with him and teach him about the sixes; it’s good to have a talented young Belgian rider coming in to ride them – it’s good for the sport. 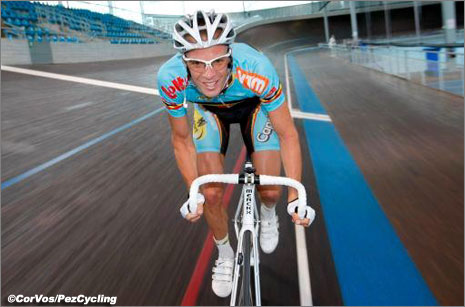 PEZ: Did you always want to be a pro?
Iljo: I had my little bike with race handlebars since I was six years old, cycling has always been the most important thing for me – it’s a family tradition.

PEZ: Why a six day man?
Iljo: My father was the manager of the Gent track, I grew up around the track, but at the same time, my father made us look after ourselves; I had to work for the money to buy my first bikes, and I had to search for people to drive me to me races – my father was always working! 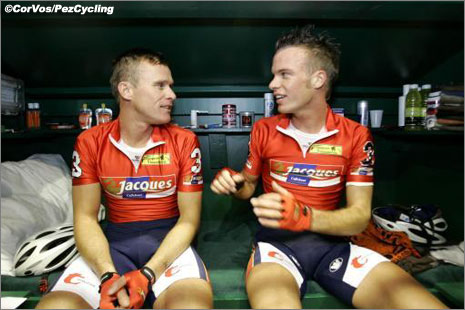 PEZ: You had a lot of pressure on you as a young rider to fill the gap left by the retirement of Etienne Dewilde?
Iljo: When Etienne stopped, it left Matt Gilmore without a partner for the Worlds and the sixes, the pressure was there for me to help Matt. I got my place in the sixes because of Matt and yes, I was at a level a little too high for me before I was completely ready. 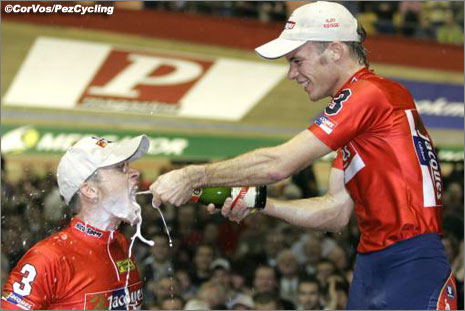 It didn’t take long for Iljo and Matt to find success.

PEZ: Iljo: You must miss riding with Matt?
Iljo: Yeah, for sure, he was very important in my career, he taught me everything. Then when it came to the point that I could help him, he had the bad crash which finished his career. He did a lot for me but that crash meant that I could never really pay him back. He was like a big brother, or even father to me – ten years older, from a different generation.

PEZ: You had a good kermesse season.
Iljo: Yes, I had 11 wins, because of my problems this year I could not ride the big races – I missed the track Worlds – and it was difficult to find motivation to train, so four or five times each week, I would ride a kermesse. I think some years I have maybe done a little bit too much on the road, but it is part of my preparation for the six days. 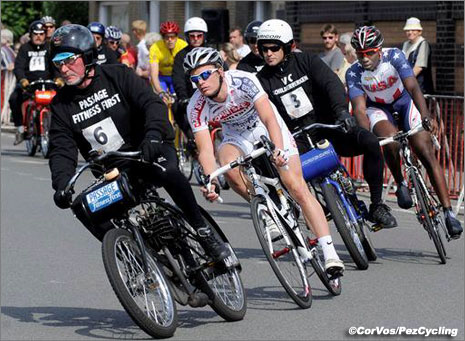 Keisse racing on the road this summer in the Europacup Derny race (that’s Justin Williams in the background).

PEZ: You made the podium at Kuurne-Brussels-Kuurne, a year or two ago.
Iljo: That year, I came out of the sixes in good shape. I was lucky that day, but I still did the ride. I would perhaps like to be in a big road team, but they would have to give me freedom to ride the sixes and many of them are reluctant to do this. The only thing about the road is that despite my 11 kermesse wins this year, I’ve done shit in a lot of road races, over the years! 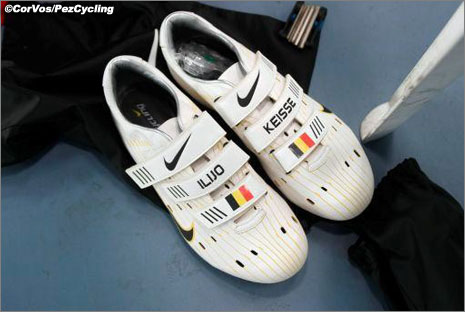 PEZ: Your ‘troubles.’
Iljo: What people do not realise is how these things go – first you get a letter to say you are ‘positive,’ but there’s no information about what it is that you are supposed to have taken. After one month, you get a little bit of information, then you can organise people with expertise for when the B sample test result is released. But the research takes a long time – maybe two-and-a-half months. The last year has been the worst time of my life. 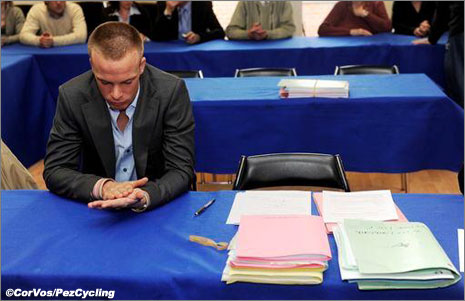 PEZ: Today was a good day, then?
Iljo: A very good day! It was not just the worst time of my life, but also for my girlfriend and my family. If you are a cyclist, people look at you as if you are a criminal, anyway – but when something like this happens, it’s even worse. 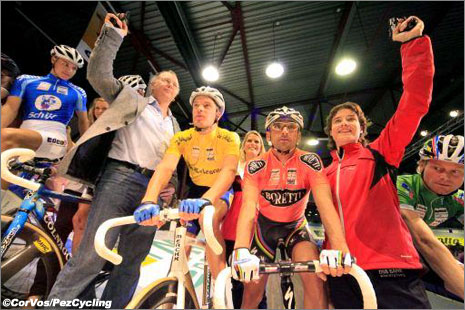 PEZ: You will have discovered your real friends?
Iljo: For sure! It’s been a very hard lesson for me, you get to know people, better. If things are good, you have lots of friends, but when things are bad – you don’t have so many friends! 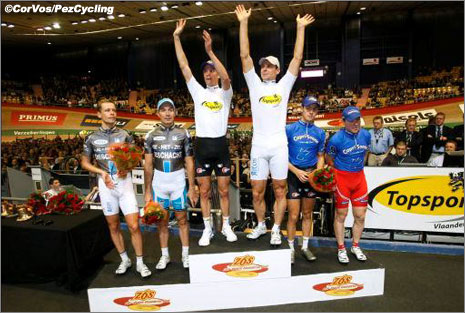 Keisse’s great win at the Gent Six in 2008 was quickly followed by a very, very bad time.

PEZ: The newspapers gave you a hard time.
Iljo: The day that the test result was announced, there were five pages in one paper – but it really didn’t say anything. In Belgium we say; ‘they took me down to the ground.” But as the situation has developed and it’s become apparent that I did not test for EPO or amphetamines and it was products which would not make me go faster, there has been a change in attitude and the press has become more supportive of me. But it took a long time to make them realise that this was not a normal case and the problem was with the food supplements I took.

PEZ: The John Saey team has supported you well.
Iljo: Yes, I am very thankful to them for standing by me – and to my other sponsors too, like Hyundai. They gave support when I most needed it and I will never, ever forget that.

PEZ: I believe the supplement company have sued you for defaming their products?
Iljo: Yes, four times already, but we have won three of the cases and I am confident we’ll win the one that is still going on, too. After this, my lawyers intend to sue them – I haven’t paid all of my lawyers fees; we want to recover them with our claim. But that’s not the most important thing – I want to get on with my career again, now. 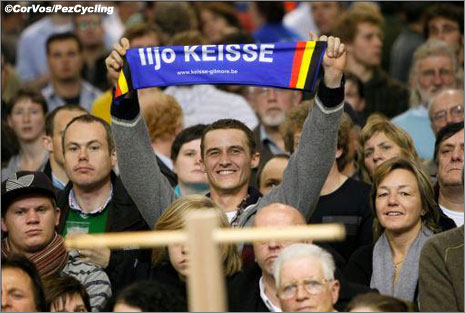 PEZ: The Gent six days, you must be looking forward to it?
Iljo: Yes, it’s my home race, it’s the classic race and for me it’s the best six day there is. I will prepare specially for it to be in the best shape; I train more so that I am in the best possible condition. The people in Gent go insane about the race and I think that this year especially, it will be bigger and more crazy than ever!

***
with thanks to Iljo for taking time to talk to Pez.