You’ve got to hand it to HTC-Columbia … they know a sprinter when they see one. In 2009, Mark Cavendish, Andrй Greipel, Bernie Eisel, Greg Henderson, Ina-Yoko Teutenberg and Judith Arndt all won sprints. And in 2010, there might just be another new name to add to that list. Ladies and gentlemen, meet Chloe Hosking.

At only 19, Chloe Hosking made an impact in 2009 winning the Wellington International Women’s Race, two stages and the overall at the Tour of Chongming Island, and going top ten in a staggering eight of her first nine European races. Not surprisingly, the big leagues came a-calling. She’ll be representing the colors of HTC-Columbia this season.

PEZ had a quick word with Chloe before she headed for her next big appointment in Qatar.

PEZ: Chloe, how are things?
Chloe: It’s quite nice here in Majorca! I stayed on here for a week after our training camp. I’m heading to the Tour of Qatar and it would have been four days traveling out of eight to go home to Australia and back. Too much!

PEZ: Congratulations on your contract with HTC-Columbia.
Chloe: Thank you very much! It’s an exciting experience for me. 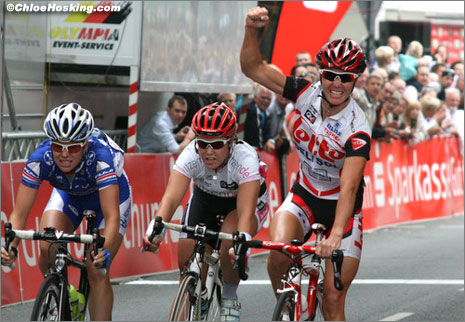 Chloe came to Europe last year of her own accord and the results were fantastic. Chloe is in the middle.

PEZ: How did the move to HTC-Columbia come about?
Chloe: I came over to Europe of my own accord last year. I got in touch with a Dutch club team, Moving Ladies, and raced with them for the majority of the year. I did a few stints with the Australian national team, too.

I managed to get some good results in a few big races and Kristy Scrymgeour contacted me and said: “We’ve been watching your results and we’d be interested in having a chat.”

PEZ: How was the big training camp with the team?
Chloe: It was a bit daunting coming here with all the men’s and women’s team riders, and all the sponsors. It’s my first time with a big team and I was just trying to learn as much as possible.

It was a great experience! Lots of training, lots of hours on the bike … it was great! 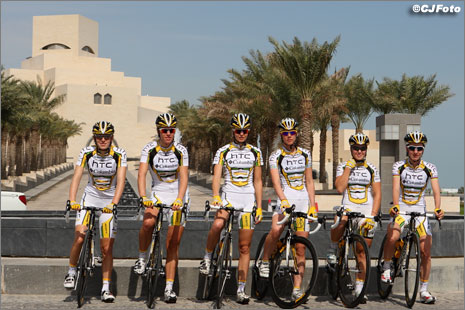 Chloe and teammates in Qatar.

PEZ: What are your new team mates like?
Chloe: It’s a really great bunch of girls actually, a good mix. There are a couple of Dutch girls, a couple of Americans, Germans … I think we’re going to have a really good year.

The training camp was really good to establish that team atmosphere and morale. Hopefully we’ll be able to carry that through all the races. I’m really looking forward to racing with all the girls.

PEZ: How did the training camp work with the whole HTC-Columbia squad together?
Chloe: It’s a bit daunting! You’re walking around and all of a sudden you see Mark Cavendish or Adam Hansen walking down the corridor. These are people you see on TV all the time … they’re like superstars.

It’s quite exciting to be around that and to see how they hold themselves. Even with the women … Ina (Teutenberg) has been in the sport for so long, I was just sitting back watching, trying to soak up as much as possible to learn from her.

PEZ: I heard that you got some tips from none other than Andrй Greipel for the Aussie Criterium Championships…
Chloe: Yeah! The team for the Tour Down Under was in Ballarat for the national championships. Bernie Eisel, Greipel, and the rest of the guys came down to watch the Crit.

I was just standing on the side of the road talking to them and Andrй was saying: “You don’t want to be any more than third wheel coming out of that corner.”

It’s pretty cool to get tips and just be able talk to these guys about tactics because they’re the best in the sport. You can’t get better advice than from those sorts of people, so it was pretty awesome!

PEZ: So what is the new bike like?
Chloe: (Laughing) I actually didn’t have the best start to the new team … I cracked a frame! That wasn’t great!

PEZ: Ooops … how did that happen?
Chloe: I have no idea … maybe in transit. I’ve seen how some airlines handle bikes and it’s not with much care! I didn’t crash it!

But I’ve got everything now. New race bike, training bike. The kit with the flag and the name ‘Hosking’ on the back. That’s pretty exciting! It’s all real. It’s sinking in now. I’m really looking forward to racing with the new bike and kit in Qatar next month. 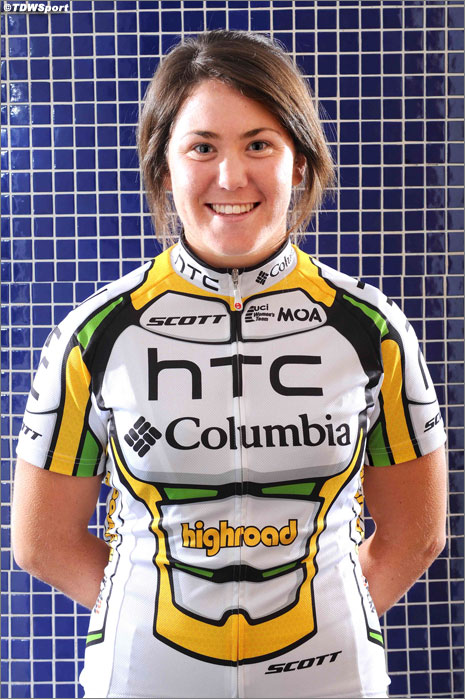 PEZ: Did you get a nice HTC smart phone!?
Chloe: Yeah! I got a new HD2 phone which is quite fancy. I’m still trying to figure out how to use everything on it. I feel quite professional really.

PEZ: You’ve already started 2010 strongly, winning the Under-23 Aussie Criterium winner. Do you have your racing programme for the year ahead sorted?
Chloe: I’m really excited. The programme they’ve given me this year is good for a neo-pro. I’m looking forward to the Dutch spring races. One-day races, they’re what I like racing. Hopefully, I’ll be able to come out with a few good results this year but, overall, I’m just hoping to learn as much as possible and be a good teammate.

PEZ: You’ve got plenty of great sprint role models to learn from … Teutenberg, Arndt, Cavendish, Greipel …
Chloe: I think if you’re a young sprinter these days, there’s no better team to go to than HTC-Columbia. I think I’ve really come to the right place and I’m surrounded by amazing athletes.

Judith Arndt and Ina-Yoko Teutenberg are two of the best riders in the sport, Noemi Cantele … these girls are amazing. I can learn so much from them so I’ve just got to make myself a sponge and soak everything up!

PEZ: So you’ll be focusing on lead-outs for Ina and things like that initially?
Chloe: (Laughing) Really, I’m just going to do whatever I’m told. The plans, I’m sure, will get the best out of me as an athlete in the long run. For now, I want to help Ina and anyone in the team as much as possible. 2010 will be a huge learning year for me.

PEZ: Do you have particular personal aims or ambitions?
Chloe: In the longer term, I want to be at London (for the Olympics). This year, I’d like to have some good rides in some of the Dutch races, I really love that kind of racing.

I’m heading to (Tour of Chongming Island) China which I’d like to do well in, and Ina will be there so it’ll be great to be able to ride with and for her. I’ll take it as it comes and see what happens.

The Commonwealth Games at the end of this year are big for Australian riders, so I’ll definitely be hoping to try and make the team for that. And the World Championships are in Australia, so everybody wants to ride the Worlds in their own country. That’s another aim.

PEZ: Is it a pressure to be so high in UCI world rankings (#16) when you’re still a teenager?
Chloe: The team recognizes that I’m still quite young. Last year I had a really good year and was lucky enough to pick up a lot of UCI points. I think if I even manage to pick up even half of what I got last year, I’ll be having a really good year. 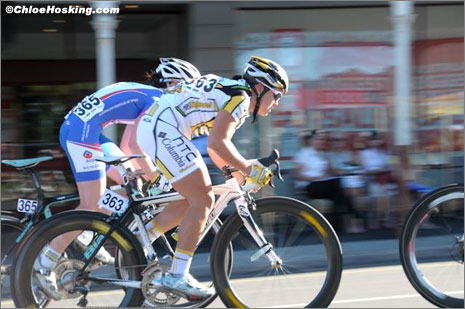 PEZ: Tell us a little about moving to Europe initially …
Chloe: Well … I finished the Junior World Championships in 2008. It was a bit disappointing, I didn’t really ride very well. I just came to the realization that there wasn’t going to be much happening for me in Australia, so I just took the initiative and got myself to Europe.

I was looking at having a bit of a gap year between finishing high school and going to university. I just thought what better way than to go to Europe, ride my bike and travel at the same time.

I didn’t really expect what happened after that. I did what a lot of young Australians do in going to Europe, but I took my bike with me.

I did what I love which is racing. Doing that so young … not everybody would be able to do it. It was a great experience.

PEZ: What were the standout results for your last year?
Chloe: It really started with my win in New Zealand in the International Cup. You didn’t have all the big hitters there like the Europeans but you had the best of the Oceania or Commonwealth sprinters. That was a big highlight and really launched my season.

Then I went to the Tour of Chongming Island in China. I won two stages and the overall which was another huge highlight.

Then when I came to Europe, even though I didn’t win that many races here, I got a fourth and a sixth in my first two European races! I was pretty stoked with that. I didn’t even expect to finish the races let alone get in the top ten.

It was pretty awesome … I rocked up on the start line and I was starstruck, surrounded by people riding for Columbia and Cervelo and all the UCI teams. I was just this young 18-year old girl who’d just got off the plane. My goal going into the race was … survive! Try and finish, so to finish sixth in Borsele and fourth in Roselare I was pretty stoked.

PEZ: And after the racing a bit of traveling?
Chloe: Sometimes you’ve got to act your age, don’t you?! All my friends had been jet-setting across Europe and South America. They’d been letting their hair down.

After I finished my season … I’d been racing from February to September and I really needed that to refresh myself. It was good to just be an 18-year old, see some of the sights instead of just hotel rooms. A good way to finish off the season and my time in Europe. 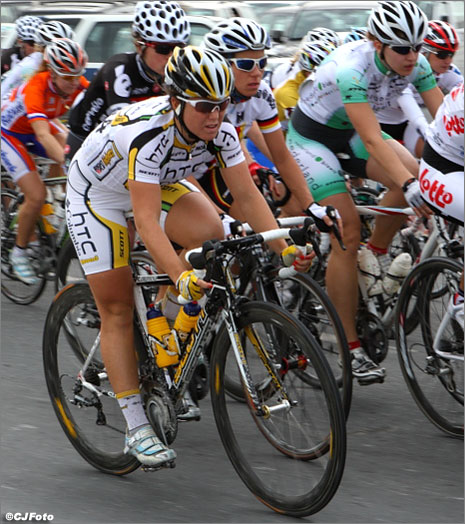 PEZ: Which city was the pick of the bunch that you visited?
Chloe: Definitely Barcelona! An amazing city, such an awesome atmosphere, beautiful architecture. I loved it so much I decided to live in Girona this year, which is only an hour from there.

PEZ: Any other Aussies out there to train with?
Chloe: Actually Tiffany Cromwell, Josephine Tomic and I will be ‘roomies’ this year. We found ourselves an apartment in Girona. We won’t get up to too much trouble … we’re all professional athletes! (Laughing)

PEZ: What kind of a person is Chloe Hosking?
Chloe: Well … I’m only going to say good things, aren’t I? (More laughter) I’m very focused. When it comes to cycling, I’m super driven. This is what I really want to be doing.

At the same time, I’m focused on my studies. I’m currently studying for a degree, a Bachelor in Communications, hoping to do a major in journalism. It’ll probably take me about ten years to finish as I’m fulfilling it part-time by distance education through Griffith University. It’s good to have something else to focus on rather than just cycling, it lets you refresh yourself, gives you another outlet.

I like to think I’m quite balanced, I’ve got my cycling, my studies and my friends.

***
On the evidence of this interview, Chloe certainly seems to have struck a good balance in her approach to racing and developing herself. Best wishes to Chloe in her debut season with HTC-Columbia, and we’ll hopefully catch up with her as 2010 progresses.

Chloe’s website is well worth a visit where you can keep up to date with her blog: ChloeHosking.com

All the information on Team HTC-Columbia can be found at HighRoadSports.com.