In Part TWO of our interview with Ben Jacques-Maynes, Ben tells us about his favorite and least favorite races, how his family has changed his outlook on racing, his hardest day on the bike, and much, much more.

When we left Ben last time in Part ONE, he had just discussed his thoughts on the burgeoning cross scene in America and conversely the even healthier road scene. And as I go to ask another question, the tiny voice of a little kid pipes up across the phone line from California to Georgia:

Ben’s, oldest, Chase, is in the mood for circle time, whilst Ben is about to take the littlest one, Chloe, to the pediatrician. So now the interview moves from the house to the car as he drives to the doc.

BJM: That’s the fun part of having kids, or rather the not so fun part. They get sick and you get to go to the pediatrician all the time. The good part is that honestly, it really helped to turnaround my career. Having my family around really gave me something to work for. It makes it much easier after staying up all night, changing poopy diapers, and listening to the kids scream…going out for a bike ride is like rest and relaxation. I can work as hard as I want and it’s still really not that bad, because it’s quiet, it doesn’t stink, and there’s not baby barf everywhere. Likewise, when you get home from some five hour rainy ride, you’re freezing, and you spent the last hour wondering why you’re doing this – you get home and your baby gives you the biggest smile and, yep, that’s it, that’s why I do it, that right there. All your cares and worries kind of melt away, and they really have to actually.

Even though you really want to hit the couch, it’s going to be time to go out to the park, or make a bottle, or do something important to get your kids ready for the next thing. It makes it a little bit easier to become a bit more detached – you don’t worry 100%, 24 hours a day about your cycling. You spend your five hours of riding plus an extra half hour to worry about cycling, and then you put on your compression tights and you run around all day. That’s basically been my MO for the past year. 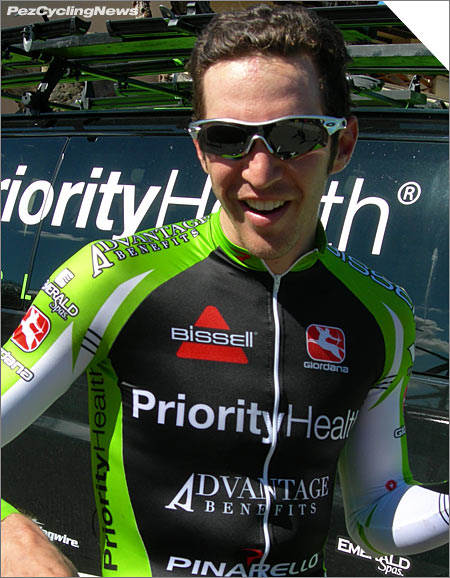 PEZ: Do you have a favorite race?

BJM: I actually enjoy just showing up at new races or new race courses – things that I haven’t done. Going down to the Sun Tour was awesome – new roads, new teams, different style of racing, the caravan is driving on the left, so you have to pull over to the wrong side of the road. You gotta keep awake, keep your wits about you to make things happen. I did Mt. Hood for the first time this year and had a blast: really good racing, awesome roads. That really plays into it as well.

I have races that professionally are favorites – ones that I’ve won, or ones that I focus on and really want to do well at, such as Philly Week or Tour of California. I wouldn’t say I’m having a blast the whole time I’m doing them, that’s for sure. With that extra training and focus comes that extra pressure to perform once I’m there. You’re more focused and you don’t smile as much, but if you do well in a race like that – it’s worth that much more, so it’s pretty cool.

I would actually say that as a category, some of my favorite races are some of the ones I do the best at. Short prologues and the mini-time trials in the middle of stage races, no longer than 10 miles or 20 minutes. They’re perfect for me, and I actually like doing them. I like being able to push myself to that maximum level, and obviously to get something out of an effort like that is awesome. It also pays off to be able to do well at a discipline like that. 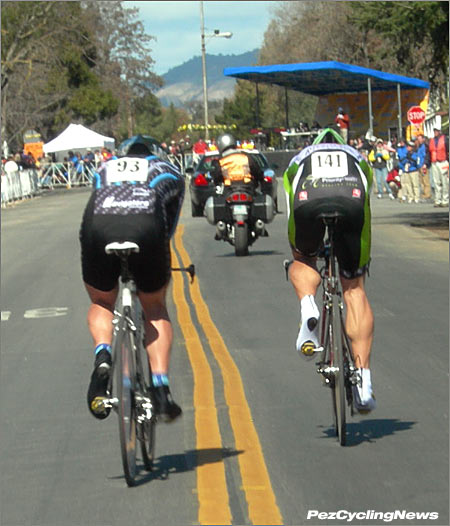 Ben likes his time trials – and for good reason – here he blows by a Navigators rider early on in the California TT in February.

BJM: Any steep, hilltop finish sucks. Although, ironically I won my first hilltop finish at Cascade this year which was shocking to me and those around me. I was worried about getting dropped and just hanging on for dear life, and I ended up just laying down the power in the last k and ran out the winner. That was great.

Anything steep though, the Tour of the Gila for example, is just murder for me. That kind of stuff certainly doesn’t play into my strengths. Anytime you’re there just suffering seemingly for no purpose it gets kind of lame. 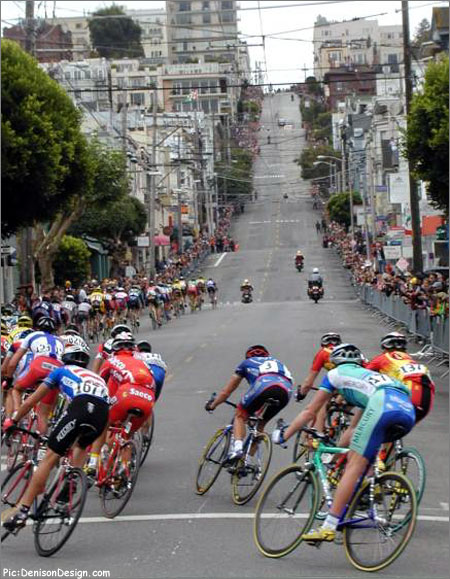 Does San Francisco count as steep?

BJM: I’m under no pressure to even race hard up Brasstown. I think the very first time we went up the hill, I had my best finish, and I was 18th. That was going as hard as I could up that hill, just workin, doin great. I probably only climbed it two or three minutes faster the first time than I did this year when I absolutely bagged it. I was weaving around, high fiving people, asking for pushes, and hamming up the crowd. I certainly got through the next day a lot easier as well. That’s the thing about stage racing, there’s maturity you learn. You don’t have to try and do a personal record in every stage, and it may be detrimental to keep on racing when there’s no race left to participate in.

PEZ: What’s the hardest day you’ve ever had on a bike?

BJM: Actually, that very first SFGP was an absolute death march. It was 130 miles, ten times up Fillmore, something like 15 times up Taylor. The race blew apart halfway through the big laps. The laps were shorter, and you just kept on coming around again and again and again. When the race started, we were racing hard, throwing down attacks, just layin it down, then we turned onto Fillmore and everyone just looked up and breathed this collective sigh of, oh shit, and suddenly everyone starts shifting into easy gears and the race got really easy for about 20 minutes after that as everyone kind of took stock of what it was going to take to get through, let alone actually race it. I went through all levels of agony at that race. 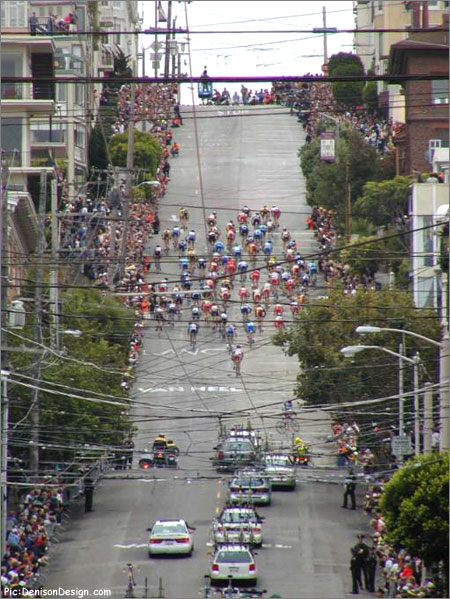 PEZ: Is there any race that you dream about winning?

BJM: I’d have to say Philly. Ironically, it’s a race that doesn’t actually suit me very well, and I’ve never done very well there. I know it’s one of those races where if things come together I can have a good day there, but for some reason, I’ve never had everything come together. I think it’s just going to take a couple more years, and then I’ll probably get a good day and the stars will align. Who knows when that will be. The funny thing is – no matter how hard I work at Philly, no matter how bad I hurt, no matter how much I suck, I always come out of it really good. The hard work there always pay off for me, so I’m never afraid to work hard there, even if I know I’m not going to make it through the race or do particularly well. That motivates me to keep working hard, keep on trying, at least make it to the finish line pedalling hard. The longer I go hard, the better I’ll go afterwards – for races like Nature Valley straight after that, which is a race I’ve won before.

PEZ: You’ve been a SRAM tester from the very beginning, what has that been like?

BJM: It’s actually been really enjoyable. SRAM has been a really good company to participate with and to be part of their R&D process. They take what you have to say to heart. I first tried their stuff at Downer’s Grove, I think it was three years ago now. I raced in the Pro-Am the day before the USPRO Crit. I said to them after the crit, “Hey this stuff is great, great idea, but there’s no way I’m racing it tomorrow. What you have right here will just fall apart on me. Great idea, but you guys really need to go back to the table with this one.” 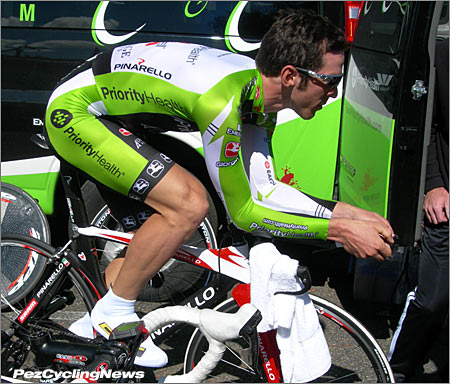 Those SRAM TT shifters aren’t so bad either!

Normally when you say that to a company they get a little hurt, because they think their idea is the best thing. Some companies don’t take criticism at all, some don’t take it well, but SRAM took it to heart, and the next time I saw their product they had reworked the whole thing and it really made a huge difference. Suddenly they had a viable product. The next year I raced it at the Tour of California and have been from that point on. Having kind of a stamp on something – I helped them do that – that’s pretty cool. To work with such an innovative company and to feel like you’re participating is reward enough.

I also get all the cool new prototype stuff on my bike. I just got the first batch of production Red. I was on prototype Red all year this year, basically from the end of Tour of California on: I got the Prototype Red shifters and derailleurs at California, and then I got the cassette, chain, and brakes starting at Philly Week. They were really ahead of the curve with this one. They didn’t make Force and then rest on their laurels for awhile. They immediately started working on ways to make it better. They kept at it the whole time. It’s been really cool to go from hand-machined aluminum shifters to production carbon fibre with graphics.

Thanks a bunch Ben for your time!