After years of admiring from the outside, Swedish TT ace Gustav Erik Larsson finally snared his dream contract – a gig with Scandinavian racing behemoth CSC. With that notorious CSC winter training camp in the frozen wilds of Norway behind him, is it still all he hoped for? You betcha! Here’s the low-down.

PEZ: Congratulations on landing a place with CSC…
Gustav: Thank you very much! I always looked up to that team because they seemed to do such good work for the riders. Plus it’s a Nordic team, and that’s my mentality. They care about the materials and the cyclists and it seems like a good environment for performing. 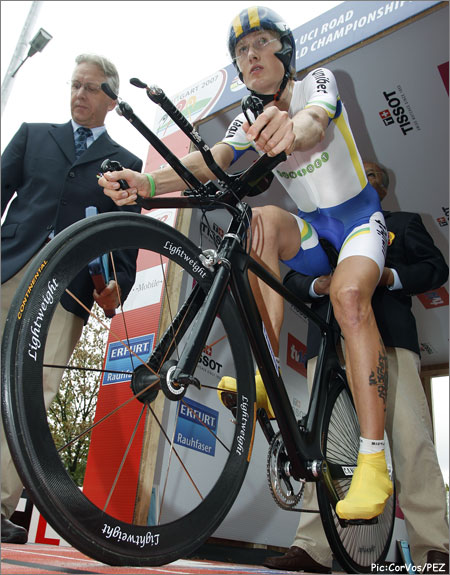 PEZ: Do you feel more at home because it’s a Nordic team?
Gustav: I think so. It’s quite special, very professional and it really suits me. They go to amazing lengths – they think about every small detail, and that means they think about the riders. Everything is planned. They’re up-to-date with new studies on training and diet, but it is the small details that make the big difference.

We just finished a training camp in Mallorca, and the bikes are superb. Cervelo and all the other brands work really well together. I can’t wait to get the TT bike – it’s going to be a huge improvement from the last bike. Aerodynamics save a lot of watts so a better bike and a better position means you go at the same speed for less effort than you made before.

PEZ: You’ve also got a new manager, Mr Riis…
Gustav: I don’t know him so well yet, but you can see that he really loves cycling, he loves his team. He works on everything, on the riders’ positions and programmes. He wants everything perfect. 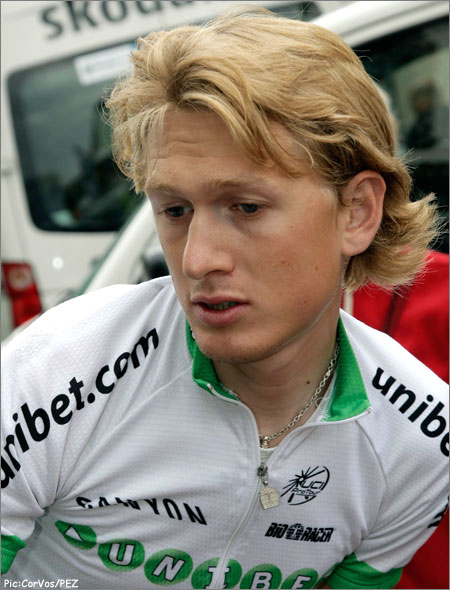 PEZ: CSC also has one of the most prominent anti-doping regimes, too…
Gustav: Very much so. I think we’ll have at least 20 out-of-competition tests this year, which is how it should be … that’s the way to the future.

PEZ: CSC is also famous for their ‘survivalist’ training camps in the Norwegian wilds. How did you handle that?
Gustav: Well, I enjoyed it! I didn’t find it too tough because I love the challenge of going out in the snow, living out, melting snow for drinking water, carrying tents and firewood, pulling sledges. It was nice!

PEZ: Did the other riders suffer?
Gustav: I guess the hardest time must have been for the staff who normally work in the office. Everyone was doing the same thing in the camp, so I think the really physical stuff was hard for them. Now we know each other and that’s really important. We know who works to help us, and they know us. If I have to contact someone in the office … well, we’ve been outside in the snow together!

PEZ: So CSC is great. How was Unibet last year?
Gustav: It was very frustrating, but apart from all the shit we had with not being allowed to race, it was a really nice team. The riders became good friends, and we had a great time together at races – and we were successful. The best riders who did the bigger races together became a strong group, all really nice guys. 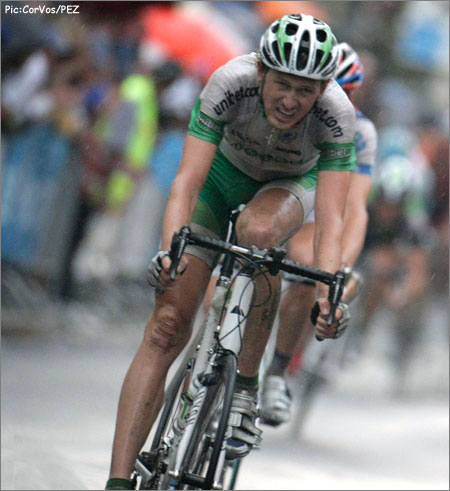 PEZ: You’ve been in some big teams with big personalities, like Giancarlo Ferretti at Fassa Bortolo. Was he really a ‘hard man’?
Gustav: I think he was a bit softer when I was there … maybe he got softer with age. It all depended on his mood, he could be really nice, sometimes hard. The thing with Ferretti was he always stood by his word. If he said “I’m going to pay you ‘X’ amount”, then that’s exactly what happened. If he said something you could trust him and I liked him for that. Fassa worked really well, good organisation. I’ve been lucky with my teams…Unibet was a great team with nice people, but the organisation was not so good. Everything was done at the last second.

PEZ: So when you negotiated with Ferretti, did you have an agent?
Gustav: No. Back then I spoke to him directly. Now I have an agent and I think that makes things a little easier for the rider.

PEZ: Going back to racing you had some strong results in 2007…
Gustav: The best was 3rd at the ENECO Tour because I got a time penalty and I never thought I’d make up the time I lost. 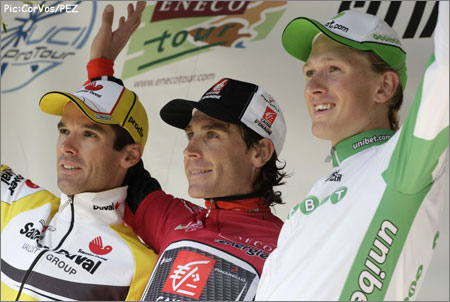 Gustav on the final podium at the Eneco Tour this past Summer.

PEZ: What’s the story behind that?
Gustav: I got hindered by a crash for a long time. I didn’t fall but I came up on the guys who fell, I got stuck with a puncture … it was a really small Belgian village, lots of shit on the road, the cars couldn’t get through. So once I got a new bike I was chasing back through the caravan and I got a penalty! They said I was drafting the cars, but…this is pretty normal. It was kinda strange and we got a bit mad about it.

PEZ: You also came out on top against another PEZ favourite – Magnus Backstedt – in the Swedish nationals.
Gustav: Winning the Swedish TT nationals the second time in a row was awfully nice, but I really enjoyed the bigger mountains like when I started to stay with the climbers in the Tour de Suisse. That’s probably when I enjoyed myself most ‘in’ a race.

PEZ: Tour de Suisse is hard…
Gustav: Yeah, but in my first year as a pro I did well there. I had a good first year and I was strong on the climbs, but then I kinda lost that when I broke my back. I seemed to take a long time to recover after that. I had back pains for two years and couldn’t see myself getting back to my form, but the Tour de Suisse last year was when I felt I could climb again so it was a big relief.

PEZ: So will you give more attention to training for the mountains?
Gustav: Well, I always did a lot of specific training for the climbs. My dream is to become a good stage racer, so I always trained for that. But I’ve also started doing sprint training as well because I lack a bit of punch there. 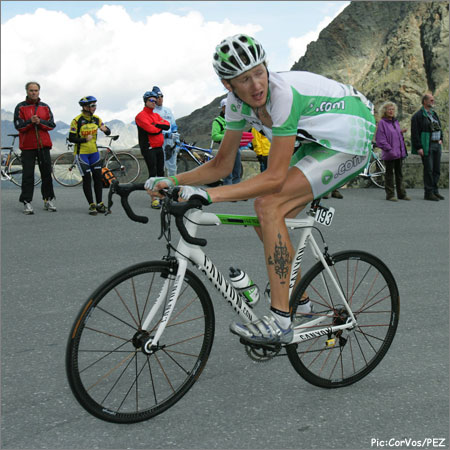 PEZ: Where can the PEZ readers see you racing this year?
Gustav: I’m gonna start in the Tour of California … I can’t wait to start racing again. Then I have some small races in Italy leading to Tirreno-Adriatico, then to Spain. The bigger races are Amstel Gold, Tour of Romandie, Giro d’Italia and Tour de Suisse again.

PEZ: That’s a heavy programme!
Gustav: Yes … but I like that. Giro, Romandie and Suisse – three races I’m really looking forward to!

PEZ: Will CSC bring their big names to California?
Gustav: We’ll have a very good team: Bradley McGee is going to ride, Fabian Cancellara, Jens Voigt I think, Bobby Julich and Jason McCartney and myself.

PEZ: And later in the year you have the Olympics.
Gustav: That’s maybe one of the main goals. The Olympics is so special because you race for your country, and everyone is watching and supporting you. I’m looking forward to the Time Trial. It’s a strange course …. but in a good way! 24 kms long, 12kms climbing, then 12kms descending, and you have two laps, so it’s not for a pure TT-er, you need to climb well, so I think it suits me. 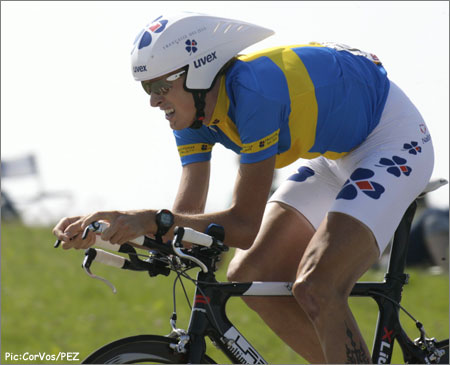 PEZ: An Olympic gold medal would be amazing, but what other race would mean the most?
Gustav: Definitely a big tour. I really love the challenge of a stage race, when you climb all the mountains, over three weeks.

PEZ: Good results or bad you have a girlfriend that knows what top-level racing is like…
Gustav: Being with Veronica (Andrйasson – PEZ diarist) makes things really easy because she understands about training and racing, and being tired. She is a professional so she does all this, too. Veronica had a bad accident last summer, but she’ll be back racing this year. She’s recovered really well and I hope she’ll be strong. The accident was the day before the Swedish TT championship and it was really hard, you know? Horrible. Looking back, everything worked out and that’s the most important thing.

PEZ: You guys are based in Italy?
Gustav: Yes, very close to Lake Lugano, near the Swiss border. It’s good for training, but the only bad thing is there’s a lot of traffic here, so I often go up north into Switzerland. The roads are beautiful around the lake, and the mountains are amazing.

PEZ: Do you think you’ll stay on in Italy long-term?
Gustav: I don’t know yet. I really like it here, but it depends on what Veronica wants, too. We have a lot of Italian friends so it would be nice to stay. Maybe we can have the best of both worlds and spend half the time here and the other half in Sweden.

And with that Gustav and I veered off into a conversation about a shared passion for British heavy metal, but that’s a story for another time! PEZ wishes Gustav and Veronica safe and successful seasons in 2008.