Phil Liggett needs no introduction and PEZ was most grateful to reach him at home in Bayford in England before he traded the northern hemisphere winter for the sunshine of summer in South Africa. We wanted our annual catch up but also to find out if there was any truth to the inevitable rumours that he might be retiring. In good news for cycling fans everywhere, however, PEZ was pleased to hear that he had no plans to bow out just yet.

“There’s no point in retiring while I’m still enjoying the sport,” Liggett explained. “Plus, I’ve too many friends around the world to catch up with every year.”

Liggett said that he had already committed to the 2012 Olympics and would also cover some of the winter events in Vancouver in 2010. As for the Grand Tours, he was contracted with the Versus network until the end of 2008.

If he had decided to step aside this year, one might have been sympathetic, though. Liggett has covered professional cycling for over thirty years and received a Member of the Order of the British Empire (MBE) title in 2005. As the high point this year, he was given the 2007 Lifetime Achievement Award from the US Bicycling Hall of Fame (last year’s recipient was Greg LeMond). 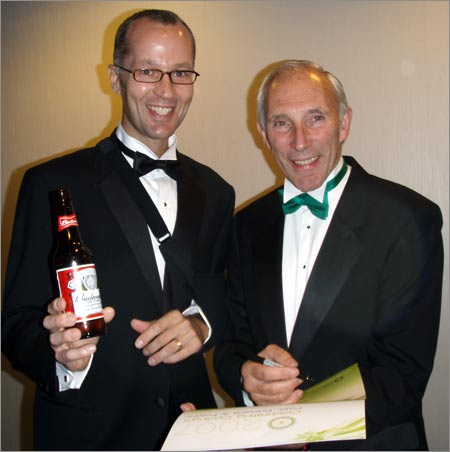 While Liggett misses the post-stage interviews that he used to do, he still has the best seat in the house these days for catching all the racing action throughout the season. And despite the sanctuary of the commentary box, he remains a staunch advocate for the rights of the riders. He has criticized the lab work that implicated Floyd Landis and Iban Mayo, accused the UCI of meddling, and suggested that some anti-doping journalists are simply on personal crusades.

Most of all, he wants to remind everyone that cycling is not an easy sport for the riders.

“It’s a tough, tough job being a professional cyclist,” he told PEZ. “And only the top riders are making any real money.”

Liggett retains a genuine, deeply-felt enthusiasm for cycling as we asked about the high points, the low points, and whether he had some supportive words for fans who have themselves had a tough season following the trials and tribulations of the sport this year. 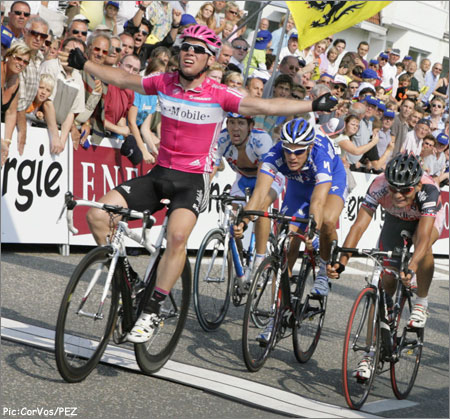 The Youth is on its way! Mark Cavendish will be a name to watch in the coming years…

The Best of Times

PEZ: What were the highlights from the whole of the season for you?

Phil: Despite the distorted view of the media which has created a disastrous season in the eyes of the general public, this has been a good year for our sport. The battle to beat the cheats has reached new levels and is working, while Cadel Evans has finally hit the high spots. Youth is on its way through – riders like Norwegian Edwald Boasson and the Brit Mark Cavendish, who are two bright stars. 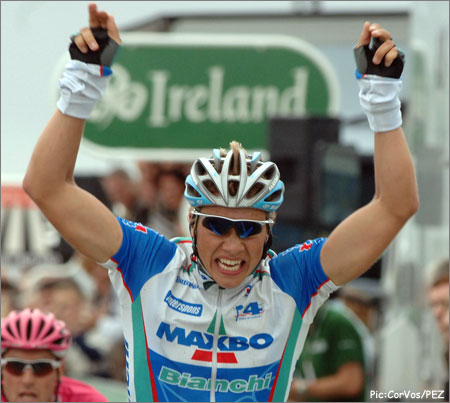 Commentating on the new Tour of Ireland could be seen as a stand-out in 2007. The public welcomed the event and Ireland is a beautiful country to show to viewers. The Lifetime Achievement award given to me by the US Hall of Fame was a big end-of-season highlight for me.

PEZ: Young riders really showed their talent this year – Andy Schleck, Linus Gerdemann, Alberto Contador, and others. Are we seeing a new generation coming through and should we be enthusiastic?

Phil: Yes, a lot of the older riders took the decision to retire in 2007, so the way is clear for a complete changing of the guard. Alberto Contador is an exciting rider in stage races and a very impressionable guy. I have felt optimistic all year about the sport’s future and remain this way. 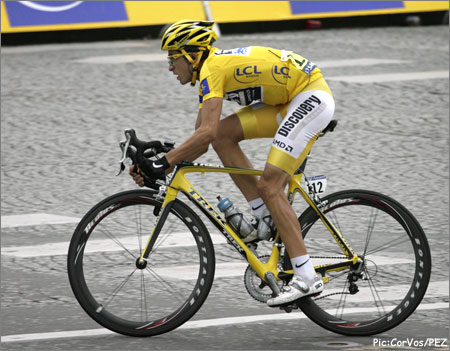 Alberto Contador started the year as a somewhat well-known rider and finished it as one of the sport’s marquee men.

PEZ: Last year you told PEZ that Cadel Evans would one day win the Tour. Were you impressed by his ride – and his season – this year?

Phil: I’ve already have mentioned Cadel, but his success was bound to come. He has had a stellar season, although in his eyes I’m sure he will feel a little downhearted. He could have won the Tour and in 2008 he may. He also rode his heart out in the Vuelta, but was slightly off his best. His Pro Tour win was almost by default – really, this is no competition, but it has found a good name to offer it some credibility. 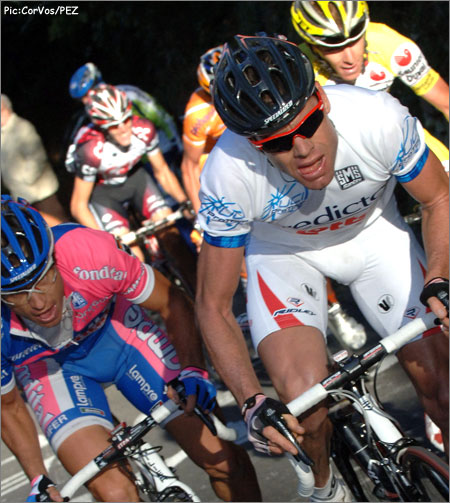 PEZ: Cadel was criticized by some observers for not attacking enough in the Tour, especially in the mountains. Was this fair criticism, do you think, and, given how he seemed to be suffering, have fans perhaps gotten too used to seeing more sparks on the mountain stages?

Phil: You’re right, people do think Cadel doesn’t attack, but if you watch him, he is a rider always giving 100 percent. Maybe he can’t attack? He is very intelligent and gifted as a rider, so I have no complaints. I enjoy commentating on him. 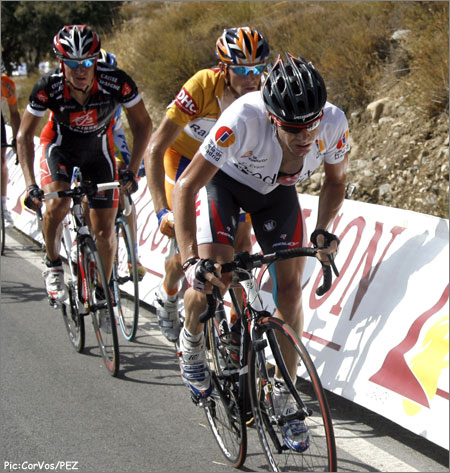 PEZ: Any predictions for next year: riders to watch and a winner for the Tour?

Phil: The Tour will be a good race in 2008 as the lack of time bonuses should give a few different leaders. The race will be won in the mountains, so if Contador is allowed to ride by the Tour organizers – and he should be – then he may win again. There are many new young names to watch as indicated above. We will see a lot of new winners at a tender young age next season.

The Worst of Times?

PEZ: The big doping stories seem to hit the Tour every ten years or so: the riders’ strike over testing in 1968, Pollentier’s drug-test ‘contraption’ on Alpe d’Huez in 1978, Delgado’s positive in 1988, and l’affaire Festina in 1998. The scandals came early this decade with Operacion Puerto and Floyd Landis last year and then this year’s debacle. Did cycling reach a low point this year and what does next year hold?

Phil: The sport has worked very hard – some might say too hard – to become transparent and totally drugs free. The Tour will always survive, but it will take time to totally regain its credibility among the casual supporter. The new biological blood passports will help weed out the cheats, but we should always remember that our sport is the hardest of all and the athletes are exceptional. I am not condoning cheating, but we should step back occasionally and realize just how good they are. 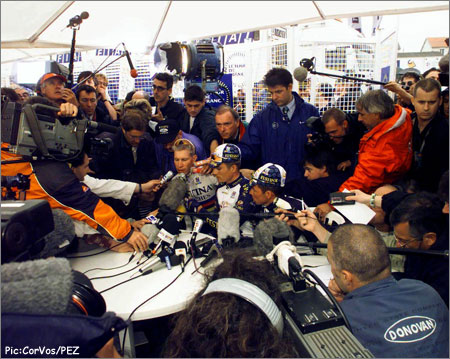 PEZ: Those historical events I mentioned remind us that cycling has always had its scandals and doping stories. Has it gotten worse in recent years, or has the climate changed and we’ve all become more sensitive to them?

Phil: Yes, drugs, alcohol and the like have always been used by riders. But serious drug taking, I think, has only happened with the big money entering the sport in the mid-80s. From 1990 onwards with the birth of EPO in Italy, the Italians started winning everything. It’s not for me to say they were drugged, but was it more than a coincidence? Their track riders got caught and Italy is no longer a force on the track. It is only the highest paid riders who can afford the ‘designer’ drugs, but it is quite clear they have been prepared to cheat. Now, I feel, the door is closing and it has become far more difficult to succeed at cheating. As in our social lives, there will always be cheats, but the hunt is on to limit their success. 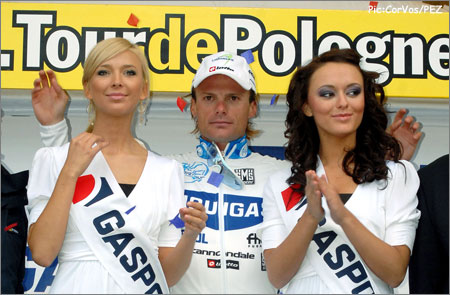 What about Danilo Di Luca? A cheat getting off easy with a short suspension, or a rider wrongfully accused and a ProTour overall stolen from his grasp?

PEZ: Is the future of the sport with teams such as CSC, T-Mobile, and Slipstream, which, despite some difficult starts for the first two, have taken a pro-active new attitude?

Phil: Professional cycling is now all about approach and attitude. Riders have an image to protect and as big sponsors give their money these days to team owners, then they should ensure that the team is taking every precaution against bad publicity. Those teams are doing this, and we can only hope that riders will see the daylight and go straight. The alternative for them is to become social outcasts. 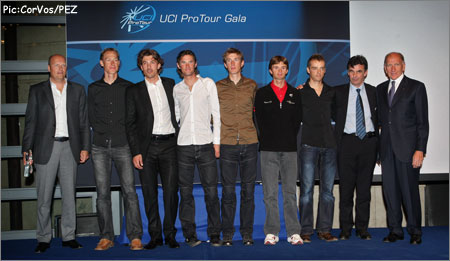 CSC not only has some of the most stringent intra-team controls, but also has the best TEAM – shown once again in their ProTour overall team title.

PEZ: Also last year you told PEZ that the Pro Tour was “doing nothing” for the future of the sport. The UCI and the ASO, in particular, still seem to be at odds over control and organization. Will the latest ‘agree to disagree№ situation actually allow the Grand Tours and some of the Classics to do their own thing, or is it just more chaos?

Phil: I am hopeful that the political battle between the UCI, WADA, the Grand Tour organizers and even some federations has reached its lowest point. The Pro Tour was designed not as a competition but a tool to try and break the grip of the GT organizers. That has failed, as it would, and now the Pro Tour has gone worldwide and left the GT organizers to, yes, do their own thing. It is the way tennis went and it seems to work for them. Which event would you watch – the Tour de France or the Eneco Tour, the Tour of Spain or the Tour of Poland? Contrary to what some people think, there are very little rights in cash from television, so a half of nothing is nothing. So let’s try in 2008 to pull together for the good of the sport. 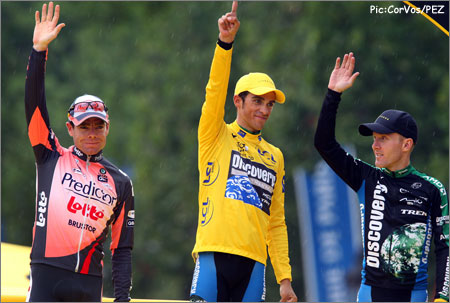 The Grand Tours will be doing their own thing in the coming years, their power still as strong as ever.

PEZ: Fans have been really tested this year by the actions of riders, organizers, governing bodies, laboratories, a frenzied media – the whole sport, it seems. What keeps you enthusiastic about cycling and any advice for those who might be wavering?

Phil: We must never lose sight of the fact that we have a great sport full of great people. As a pastime, cycling around the world is more popular than ever. I am very hopeful for the future, despite the politicians’ best efforts at times to ruin it. We have lots of talented youth and as long as we do not allow it to become tainted then we can only go forward. If you feel you are falling out of love with our sport because of the drugs scandals, then where are you going to turn? Drugs are everywhere and your best mate will never tell you. Ask Marion Jones.

Thanks, Phil. PEZ appreciates your candour and support and we look forward to catching up with you next year!