Pursuit ace Rebecca Romero has the chance to make history in the Beijing Olympics. After a spectacular sporting metamorphosis, she could become only the second woman…ever…to medal in consecutive summer Games – in different sports.

After winning Olympic silver and World Championships gold as an elite rower, Rebecca grew disillusioned with the rowing ‘system’, and came close to quitting sport altogether. Going through rehab for an injury at the end of 2005 proved to be a blessing – she was approached by British Cycling who had a hunch she could succeed on the track. The battery of tests produced amazing results.

For those who doubted them, and Rebecca, how’s this for a response?: World Championship silver; World Cup Gold; British titles on road (time trial) and track (pursuit). Not bad, eh?

Shortly before the Track World Cup in Copenhagen, PEZ managed to grab a quick chat with Rebecca and found an athlete with a lot of interesting views on how your state of mind is as vital as any other preparation.

PEZ: How does it feel to know you can really mix it with the best pursuiters in the world after only two years in the sport?

Rebecca Romero: 2007 was a massive step up so I feel on track for the Olympics and I’ll be racing in Copenhagen where I need a good performance to establish confidence for the Worlds and Olympics. (Ed. – She got it! She won the pursuit!) 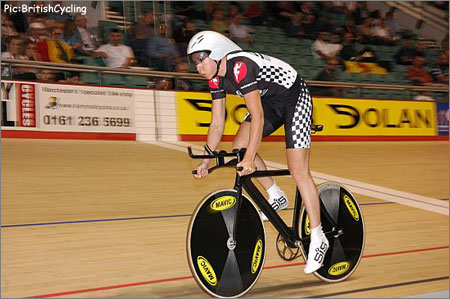 PEZ: Is it easier to have two such defined targets in 2008?

Rebecca Romero: Well, it’s a long, difficult year. The Olympics come five months after the Track Worlds, so you have to adjust your training structure – you focus on the 12 months from one Worlds to the next, but this time there’s an additional peak for the Olympics. I always have to keep in sight that the ultimate aim is in August and the ultimate goal is Olympic gold.

It’s a new situation for me, so I need to think ahead and factor in some down time, and it’s all about striking a physical and mental balance.

PEZ: Might it be harder to make yourself rest, when those targets are so big?

Rebecca Romero: I set the targets – ultimately I want to become Olympic champion and, if it’s achievable, win the Worlds, too. Knowing what that will take means every day and every training session has to be intense and focused. Time is ticking by so quickly.

The problem is that you commit so much to it, it becomes all-consuming and there’s nothing much else in your life. You can almost become your own worst enemy, but it’s a once-in-a-lifetime opportunity.

No-one’s a robot so you have ups and downs – that means you need to have a sensible head screwed on. I’m pretty level-headed so I don’t tend to draw on others so much, but I have my family and friends to help me keep things in perspective.

PEZ: How were you welcomed by the cycling ‘community’ when you switched from rowing?

Rebecca Romero: The rowing team is close-knit – it’s a big squad and everyone trains together every day so you’re in close proximity all the time.

Cycling is split a bit more into the separate disciplines and riders can base themselves where they want – you’re not together all the time. My experience of the team at the World Championships was of a smaller team but one that came together and became a really tight team unit with a great will to win.

It’s a totally different set-up, and I was welcomed really well considering how I came to cycling.

PEZ: How did the switch come about? Did the British Cycling boffins get really excited when they saw the data you were putting down in the tests?

Rebecca Romero: It all happened really quickly, from getting approached when I was recovering from injury to getting involved. I was very surprised to get the reaction I did. When I decided to commit to cycling, I had to have faith in what the coaches were saying and assume they were right!

PEZ: Your first race on the British Cycling team was the national TT championship … which you won!

Rebecca Romero: I was aware that there was a lot of publicity about me starting so I saw it as a chance to demonstrate my ability. It was daunting because it wasn’t my target event, but I put a lot of importance on it so I lifted my game a bit. The end performance and result helped to put me on a good footing to build a cycling career and dispel any doubts that people might have had about what I could do. 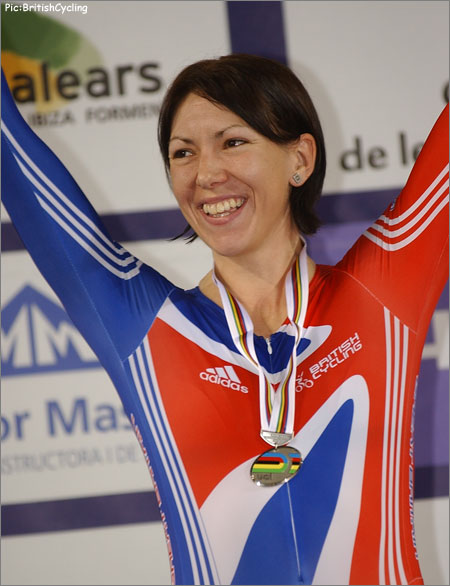 PEZ: How did your competitors react?

Rebecca Romero:I don’t really know of their reactions. I think it stunned a few people. It confirmed that British Cycling were right in taking me on as a fast-track athlete.

I think it was a benefit because it raised the level a bit. The other top riders have raised the bar because they responded so its benefited the British team and women’s cycling.

PEZ: Some people might be surprised that you feel cycling is less restrictive than rowing?

Rebecca Romero:Well…I found rowing to be run a bit like a ‘dictatorship’ to be honest. You’re just one athlete of many who had to follow a generic programme with little say in your own personal athletic development. You had no control over your destiny really.

In cycling, the onus is on yourself. In rowing, you felt like you were at the bottom of the hierarchy, but in cycling it’s the other way round and all the staff and coaches are all there to support us. When you take ownership of your training and performance you’ll be happier. A happier athlete is a better performing one. There’s more trust within cycling.

PEZ: So you have no regrets about your move?

Rebecca Romero: No, I felt very fortunate that it all happened when I’d decided I was retiring from rowing. I wasn’t happy or enjoying it. I wasn’t training and competing in a way that would allow me to be the best I could be. Leaving was a hard and sad decision to make, because I felt I could have had a long and successful career in rowing.

The World Track Championships in 2007 were a real mix of emotions. I was elated at being so successful and performing so well, but it made me feel quite upset at the realisation of what I could have done in rowing if the set-up had been the same and if I’d been as happy as I was in cycling. But it confirmed my belief in my choice. 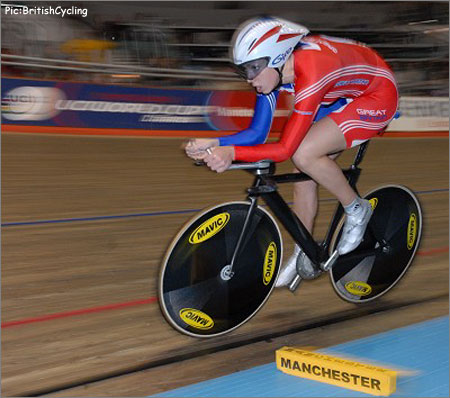 PEZ: Your website emphasises the importance of psychological preparation and visualisation …

Rebecca Romero: Within rowing, the competitors are treated like robots. That’s OK if you’re looking purely at conditioning, but I see sport as an art where every athlete is different and will respond to situations uniquely. When sport is about that final 1% that separates winning gold from coming fourth then the difference is your state of mind.

Racing comes from an emotion and having a real feeling for why you’re doing it rather than just going through the motions.

I feel lucky and that I never want to quit sport until I really have to. When you’re given an athletic gift it should be a dream to make a career from that – before I switched to cycling my aspirations were being ‘numbed’ as it was such a mental struggle. Now a fire’s been relit.

PEZ: Have those around you noticed a psychological change in you?

Rebecca Romero: There were a lot of comments about how much more I was smiling and that I was a different person!

PEZ: Do you prepare differently, mentally, for a pursuit race rather than a rowing race?

Rebecca Romero: Well, in rowing you’re side-by-side with your rivals so you see it all, it’s very physical. In the pursuit your rival is almost irrelevant – they’re on the other side of the track and you’re locked into a race against the clock. You think about your own effort and performance.

[Ed – In the 2005 world rowing championship, Rebecca pounced on a mistake she saw the German boat make to drive her team to a gold winning performance, so she knows what she’s talking about when it comes to the fine margins that bring success.]

PEZ: Do you think you’ll ever switch to the road?

Rebecca Romero: It’s unlikely to happen. I’m a lot bigger than the majority of road riders, so it’s a completely different physiological effort. There are more sprints and changes of tempo which don’t suit me.

Time trials are different, but there’s so much to learn tactically about road racing that you’d need to focus on it for a couple of years and not just jump straight in. All cycling disciplines are so different and need specific training. 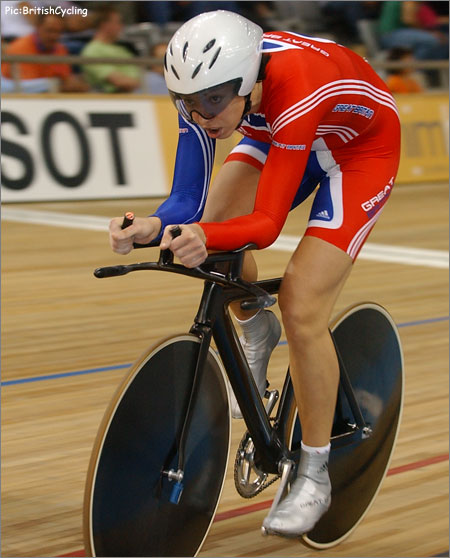 PEZ: Is the 2004 Olympic medal your career highlight so far?

Rebecca Romero: That was an Olympic gold lost rather than a silver won. I’m a very bad loser! The silver at the track Worlds was bigger last year.

PEZ: Is there a longer term plan for Rebecca Romero?

Rebecca Romero: I can’t even think beyond Beijing at the moment. Everything that comes after that will hinge on my result there, but with the 2012 Olympics coming to London…that’s a big draw.

Plus, I’m still very new to cycling and I know I’ve got a lot of years left as an athlete. I can get more out of myself, but there are other things I want to do with my life, too!

And with that, we wished Rebecca the best for her season and her goals … maybe we will see her making history on the podium at the Olympics.

Hopefully, Rebecca will be on form for her big targets and she might be able to add another couple of gold medal performances by the end of 2008.

For more about Rebecca, go to check out her website: www.rebeccaromero.co.uk