How can you not want to interview someone who goes out and buys their own PEZ socks? We were lucky enough to chat to three-time Irish Women’s Road Champion Siobhan Dervan on beating men, racing for the sport not money, and just why she showed up at races in PEZ attire!

My cell phone squeals into action as a text message comes in. “Think the landline mite b fecked … try it but if it doesn’t work u can try my mobile.” For those of you in North America, this means that the landline may not be available. For me, it meant 45 hugely entertaining minutes of banter with current Lotto-Belisol professional Siobhan Dervan. So, let’s get started …

PEZ: How come you own a pair of PEZ socks?
Siobhan: I bought them off a website … I don’t think it was actually PEZ! I used to wear them when I was racing and training. One day I went training with my Pez socks on … Christine Vardaros (PEZ contributor and ex-Lotto rider) saw them and she’s like: “Oh my God! Where did you get PEZ socks?!” She took a photo of me and she said she would send it in to the Daily Distractions. I think the picture is out there somewhere!

My boyfriend is a cycling obsessive so he knew the site, anyway! 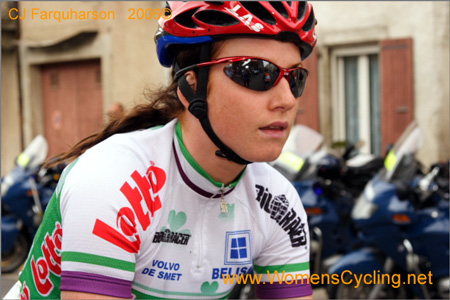 PEZ: So, how’s the off-season going?
Siobhan: Grand, I’m still on a bit of a break. I’ve just bought a mountain bike but I’ll start back on the road bike in a week or so.

(Unfortunately, it turned out to be a break of a diferent nature – Siobhan’s arm is in plaster just now …. so get well soon! – ed)

PEZ: At least you’re going to get a proper rest.
Siobhan: I needed it. I was absolutely wrecked after the season. I got sick in August, never got clear of the illness and finished my antibiotics two days before the Worlds. I was pushing it all the time, then I got really sick after the Worlds.

PEZ: You were the first Irish woman to ever finish the Worlds so you must have been pretty pleased with that?
Siobhan: No … disappointed. I felt I’m better than my result there. I’d missed loads of training on the run in.

PEZ: I hear the plan is for next year’s world championships to be one of your last races.
Siobhan: Yeah, it probably will be my last race before I go to university. I’ve heard it could be harder than 2007 which might suit me better. It’s going to be hilly and I’m not a bad climber really. I wouldn’t say I was going to win it! But I’m confident I can do a decent performance.

PEZ: So if you go top-20 or top-10 next year at the worlds…?
Siobhan: At the moment, it wouldn’t change my mind … but you never know! I think it’ll be time to get on with the rest of my life. I want to go back to college and do teaching. I’ll be 29 this time next year, which isn’t old, but when you’re starting a new profession you think about your age a bit. But if I go top 10 or something, maybe someone else might change my mind!

PEZ: What’s your off-season like?
Siobhan: I need a total break. I take some time off the bike, but I’m strict with myself. I like to let off a bit of steam, go out with my friends here that I don’t get to see too often during the season. But I’m professional about racing and training, and I don’t miss the going out then. I keep that in mind in winter so I watch my diet and so on. 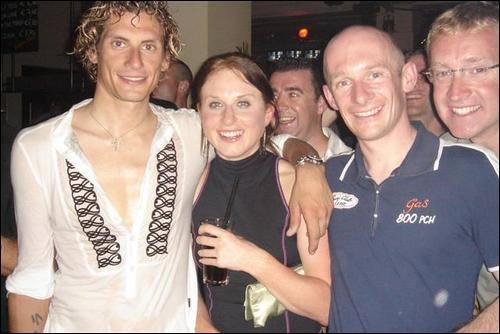 PEZ: I’ve seen the pictures of you with Bettini and Pozzato after the World’s – looks like they enjoy a night out too!
Siobhan: That was a total fluke! We went to the bar after the road race in Madrid and a huge bus pulls up. All the pros started pouring out into the bar! We all took off to an Irish bar afterwards and they had no problems being in the pictures. It was a great night!

I didn’t go out this year and my friends told me it wasn’t such a good night.

PEZ: Maybe because you weren’t there?
Siobhan: Well, it could have been! Ha ha ha!

PEZ: How did you get started in cycling?
Siobhan: Initially, I was a runner, but I got stress fractures. The doctors wouldn’t let me run so I took up cycling and I entered a few local races … and I won them!

Now, there weren’t any big name cyclists there but I beat a few men so I got some attention. The coach in Cork invited me to train with the lads, and they couldn’t believe it as I don’t think they’d had a female in the club!

Then I went to the Sean Kelly Academy in Belgium for a laugh to see how I got on. I finished a few races. The manager of the house there knew a local man who was setting up a women’s team which turned out to be Lotto and he asked the manager … So I got a slot on the team.

PEZ: Obviously, you’re still there so they must have liked what they saw.
Siobhan: Yeah, I guess so … it’s also thanks to my coach Paddy Doran for helping me.

PEZ: Do you speak to ‘King Kelly’ at all?
Siobhan: Oh, he’s really nice. And very helpful with the guys, especially with setting up the Academy, the Sean Kelly team. He’s been to the races and offered advice to me, like he did before the Worlds. He’s great. Everyone here in Ireland loves him.

PEZ: What are the targets for you next year?
Siobhan: The Worlds for sure and we’ll see about the Olympics. I’ve actually joined a new team for 2008 – Fenix in Italy, so I’ll be riding along with Svetlana Boubnenkova and I’m really looking forward to that. It’s going to be a new challenge after the last few years in Belgium.

I’ll miss the girls from Lotto; there was a great team spirit and although I knew the English-speakers better, everyone was nice. My Dutch is crap … I understand everything on the radio now but I’m not really good enough to have an in-depth conversation.

PEZ: What about your career highlights so far?
Siobhan: Last year, finishing the Worlds was major, because no Irish female had ever done that. There had been a bit of debate about whether I should go as I didn’t have a good time in Madrid in 2006. To finish was a big goal and I did that. I suppose my national titles – three on the road in consecutive years.

Last year, I stepped it up a bit by doing some men’s races like the Tour of Ulster and Ras Mumhan – two races that no girl had ever done before. I finished them no problem. I find those men’s races great craic (ie: fun – Ed) as there’s no pressure at all.

PEZ: Who are going to be the names to watch on the women’s scene in 2008?
Siobhan: Well, Nicole Cooke and Marianne Vos are the main two, but I think Oenone Wood as well – she’s a brilliant rider who can win in just about every discipline. I’d bet on my new team mate Boubnenkova to get some good wins, too.

PEZ: How tough is it to race in Europe?
Siobhan: I miss my family and friends. My boyfriend John works in Scotland, so I don’t see him as much as I’d like to. That’s the hardest part.

I was really lucky to stay with a great family in Belgium for two years. Luc would just take a half-day off work to help me train in the hills. Just amazing people. 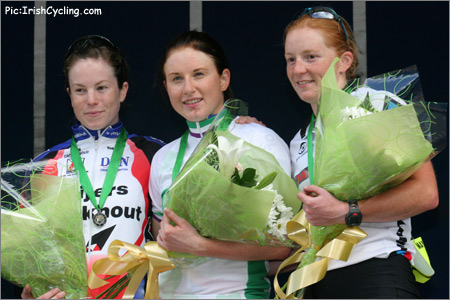 The top step of the podium is a familiar spot for Siobhan in Ireland.

PEZ: How about financially?
Siobhan: There aren’t many girls making a living doing this. Cooke, Vos, Judith Arndt and a few others maybe. The rest rely on jobs and private sponsors. I get funding from the Irish Sports Council, and the local credit union in Ballinasloe has been really generous with support, which I’m really grateful for. I also get help from Kinahan Commercials, the Corner House Pub in Cork, Zipp and Douglas Cycles in Cork as sponsors.

PEZ: How does an average racing salary for a woman compare with the wage for a ‘regular job’?
Siobhan: It doesn’t.

PEZ: Not even close?
Siobhan: Nowhere near. I’d guess the average for a rider is …. maybe 400-800 Euros a month. Some girls ride for nothing, just expenses.

It’s also common for the Belgian and Dutch girls to have a regular job at the same time. They’ll work week on/week off because the salaries aren’t enough.

I normally work from November to March, and I’ll be teaching this winter. You’ll find that suits a lot of girls because they can be a supply or substitute teacher. I’m always praying I win the Lotto!

I did my degree in Industrial Chemistry, but I’ve changed tack to teaching because I enjoy interaction with people, and sport is my passion now.

And with that, it was time to resurrect the infamous PEZ Speed Round!

PEZ: Strengths and weaknesses?
Siobhan: Strengths are definitely climbing, something I’ve really worked on since I started out. Weaknesses – not too keen on sprinting. I think that’s more of a mental thing though!

PEZ: Best advice you can give?
Siobhan: Listen to your body

PEZ: And for the men?
Siobhan: I don’t really follow the men too much. Make something up!

Maybe if we pick her boyfriend John, that’ll be a suitable answer! Thanks a million to Siobhan for being such a gregarious interviewee, and best of luck for what might be her farewell season in 2008!