After an incredible 2006 campaign, Coloradoan Tom Danielson seemed poised to finally assume his throne as America’s Next Big Thing. Injury and illness combined to lay the GC contender/climber low for the 2007 season. PEZ caught up with Tommy D and discussed what went awry this year and the immense possibilities looming for ’08.

2006 was the break-out season for Discovery team pro Tom Danielson. He took his Tour de Georgia win from 2005 and translated it into an overall win in the Tour of Austria. Along the way he rode strongly in the Giro d’Italia in support of Paolo Savoldelli, although he abandoned with the flu with only two stages to go while holding 16th position.

But these rides were only the prelude to his thrilling performance at the Vuelta a Espana. The American climber found his form in the Spanish mountains and secured an impressive win on stage 17, attacking out of the breakaway and duelling with a fired-up Alexandre Vinokourov into the finish in Granada. His final placing in the race was 6th. 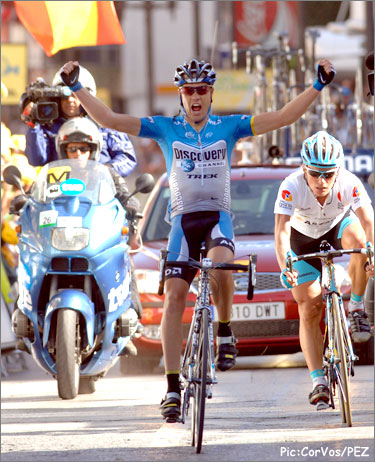 Back in January this year, PEZ profiled Danielson ahead of what he hoped would be a big year of racing (See Part I and Part II) .

Unfortunately, 2007 could be described as his year from hell: struck down early by stomach parasites, then suffering a horrific shoulder injury that took him out of this year’s Vuelta just when he was at the peak of his form.

“It’s nice to have the season over,” he told PEZ over the phone from his home in Durango, Colorado. 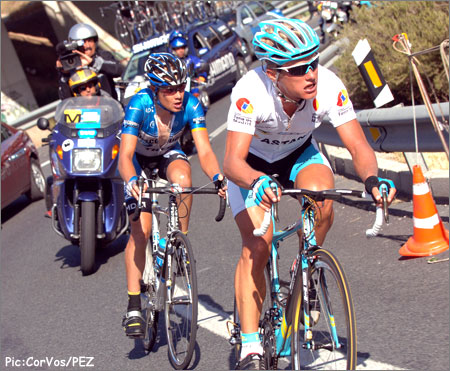 Although the reconstructive operation on his injury had only taken place seven weeks ago, he was able to report the good news that he had returned to riding and was recovering well.

“The shoulder is doing really well,” he said, “And I’ve been back on the bike a couple of weeks now.”

Despite the year’s rollercoaster ride and the agony of disappointments, Danielson was happy to fill in the details for PEZ again. 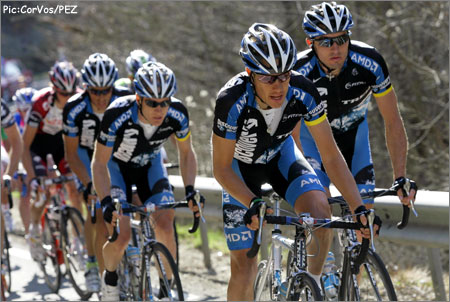 Danielson was a strong component of the team that helped Alberto Contador to victory in Paris-Nice.

The build-up to what would have been Danielson’s first Tour de France did not go as planned. He rode well in the early season at the Tour of California, in support of Levi Leipheimer’s win. Also, in Paris-Nice, he helped control the race its latter stages to secure victory for Alberto Contador.

Teammate Janez Brajkovic won the Tour de Georgia in April, another strong outing for Discovery, where Danielson said he lost some of his motivation to repeat his 2005 win and wanted to ride more for the team victory. Motivation was less the problem, though, as his stomach issues became persistent in May and struck with full force just before his first appearance at the Tour of Catalonia. 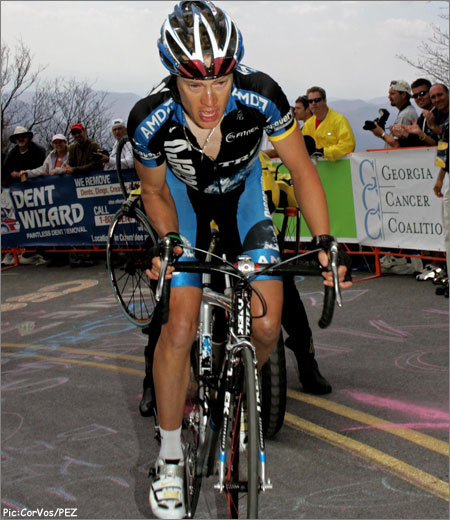 By June, it was even more serious and he was forced to abandon the Dauphinй, his hopes for riding the Tour dashed.

The problem was diagnosed as Giardia, but further tests revealed two further parasitical infections in his intestine and oesophagus. He would have to watch the Tour on television. But after a course of what he described as ‘Draino’ antibiotics, Danielson was soon recovering quickly ahead of the Vuelta. 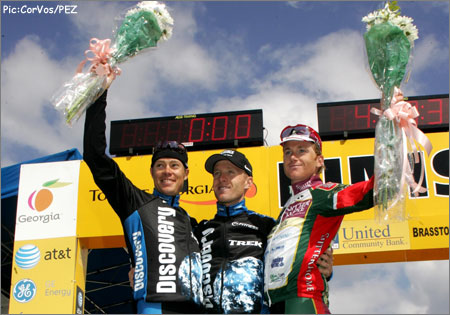 Danielson stood on the podium for a second time this year on Brasstown Bald after Discovery went 1-2 on the day.

“I gained 5kg in muscle,” he said. “And was putting out more power than I ever had.”

He even had time to notch another win in the Mt. Evans hillclimb race as part of his preparation for the Vuelta.

“I was ready,” Danielson said of this year’s race. “It was a great course and a great opportunity for me.”

But only a few hours into the first stage, he hit the deck with Damiano Cunego and his race was over with a broken shoulder.

“It was a really bad injury,” he explained, “And a difficult surgery.”

Now, part of his daily training regime consists of three hours of physio and other treatments. For the Danielsons, it has been more injury recovery time after Tom’s wife Kristin – herself a pro mountain biker – spent five weeks on crutches after fracturing her tibia in a crash in early July. 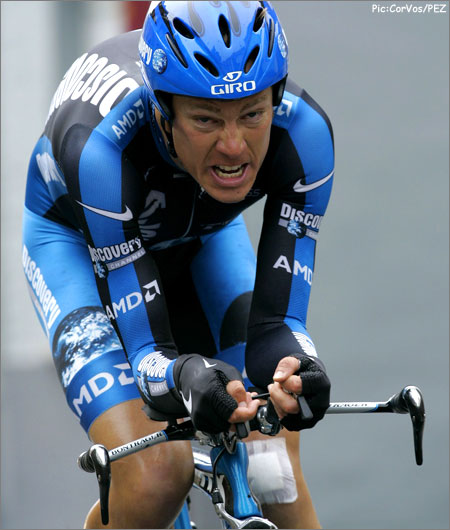 Danielson rode a strong time trial at the Tour of Belgium this summer, confirming again, that his time trial abilities are not to be scoffed at.

A strong ride in the Vuelta would have been bittersweet satisfaction after missing the Tour, and another successful outing for the Discovery team that has had a fantastic racing season ahead of its demise.

Danielson, however, was already looking forward to next year when he spoke with PEZ.

“Big goals and big aspirations,” was how he summed up his intentions for 2008.

He will of course be riding for Jonathan Vaughters’s team Slipstream, with the team gathering this month for a meet-and-greet training session in nearby Boulder.

Vaughters has said in press comments that he does not see the team forming around a designated leader, following the Armstrong model, and would instead focus on taking stage wins in the major races that the team contests.

Danielson, however, sees it slightly differently.

“That’s just Jonathan keeping pressure off the riders,” he said. “It’s his way of saying that there’s no pressure on anyone to do anything in particular. I’m a GC guy; I’m not really just a stage hunter.” 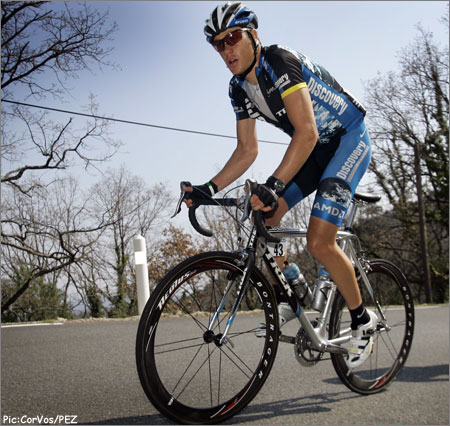 Danielson has worked hard to make himself a complete GC package: focusing hard on climbing and time trialing.

For the best pure climber to come out of the US in a decade, PEZ suggested that he might consider going after the King-of-the-Mountains title, like Mauricio Soler from wild-card Barloworld did in the Tour de France this year.

But Danielson was less than enthusiastic about such a goal.

“I’m one-hundred percent committed to a GC performance,” he said. “And that’s what I like to do.”

Still, he was quick to add that grabbing high-profile stage wins in, say, the mountain stages of the Tour was not off the agenda.

“I love to climb, so I wouldn’t necessarily rule it out,” he explained. “If the chance was there I would absolutely go for a stage win.”

He had already scanned the recently-released Tour route for next year. Vaughters suggested recently that the altitude climb to the 2,802-metre Col de la Bonette on stage 16 would suit Danielson’s climbing skills. But PEZ was more interested in whether winning stage 17 finishing on Alpe d’Huez was something he was thinking about.

Danielson was reluctant to be drawn on his intentions for the legendary mountain – a climb he has yet to ride – but did remind PEZ that another Colorado climber, one Andy Hampsten, had already claimed victory there. 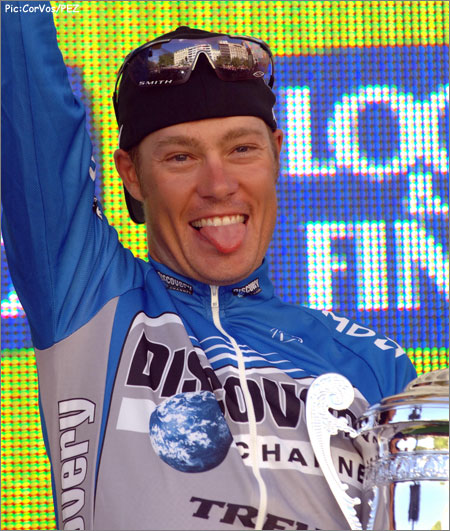 Will we be seeing a triumphant Danielson on many a podium in ’08? Don’t bet against him.

But there are months of training – and an invite for Slipstream to secure – before the Tour can be considered and, despite all the setbacks this year, Danielson was remarkably upbeat and enthusiastic about his riding.

“Cycling is like this,” he told PEZ. “There are good seasons and bad seasons. I’ve been learning some more about myself, and I’m really motivated. It’s just incredible to be back on the bike.”

There will certainly be little time to rest further before the end of the year for Danielson, though. He explained to PEZ that his schedule will include promoting and fundraising for his work with the Junior National Cycling Association, as well as his regular training.

Although the weather has apparently been great in Colorado for riding recently, Danielson said that when the snow comes he might head for the warmer climes of Tucson, Arizona, and one of his favourite climbs – the 40+ kilometre ascent of Mt. Lemmon, with around 2,000 metres of elevation gain.

With that sort of training, next year could well be Danielson’s big year. He is clearly amoureux fou du vйlo, crazy about cycling, and it is hard not to be swept up by his infectious enthusiasm for professional racing.

“I’m in love with the bike again.”