Canadians tend to keep a low profile in the world of elite level pro cycling… that is if you can find ‘em… But when a rider wins a season long UCI tour – like Svein Tuft just did… people take notice. PEZ recently talked and rode with, the 2007 UCI America Tour champ.

This year saw the continued development of International cycling beyond the famed and cobbled roads of Europe. The UCI America Tour, combining events from Montreal to Santiago, Chile, is becoming a key breeding ground for top talent. But the 2007 circuit faced a new kind of dominance in the form of Canadian Svein Tuft and his Symmetrics Fuelled By FarmPure Cycling team. PEZ caught up with the recently crowned Continental Champion and was pleased to find his candid approach to the current situation in the sport mirrors that of the fans.

In the township of Langley in BC’s vast lower mainland, you’ll find Svein Tuft – at least for the off season. Svein is your typical outdoorsy kind of guy – he likes to hike with his dog. He likes to camp in the wilderness. He is also, without a doubt, one the World’s best cyclists not currently in Europe.

As they always do with traveling pros, plans change. My plan was to go for an easy spin with Tuft, but a mix of travel issues kept him in Europe after World’s for a few extra days, and he returned home exhausted. And with nary a drop of road riding in his foreseeable future, he suggested mountain biking. 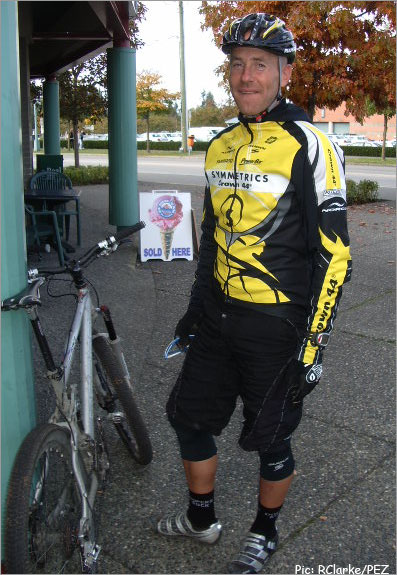 Ready to drop the muddy hammer.

This, I thought, was an excellent suggestion. While I had been hesitant about our “spin” (for fear of the inevitable Pro-dropping-non-Pro on the first slight incline), I felt I’d at least be able to hold my own on the dirt. I mean, honestly, what were the odds that he could mountain bike as well? 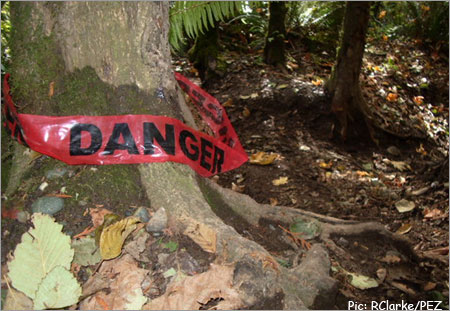 Just a snippet of the “moderate” terrain we faced.

I stood corrected. He razzled and dazzled. He bunny hopped. He even jumped things I had trouble walking over… or down… or around. And he did it all as a recovery ride, waiting patiently and politely at every trail-head as I limped my way back to civilization. 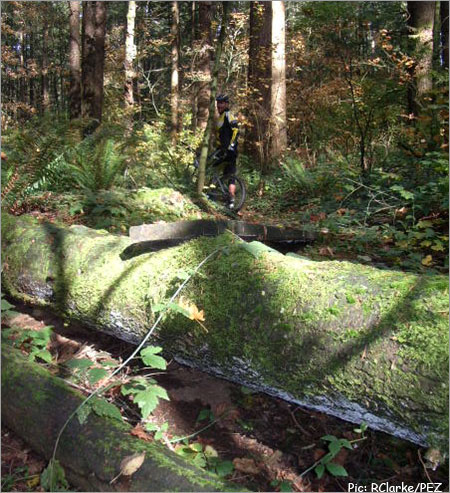 “Hey, you planning on riding… or walking today?”

We navigated his local back yard single-track, and I’m almost positive I’d seen some of these trails before in those crazy videos of the guys flying off platforms and teeter-totters. And he handled it all like he was on the UCI 4-Cross circuit.

Well, one thing is for damn sure- if there is one wheel in the peloton that you want to hold on to, it’s this guys. Too bad you’ll only see if for a few minutes before he drops you like gravity on a bad day.

But enough with the dirt. The story of how Svein got into racing, as ironic and clichй-riddled as so many top pros (didn’t start riding until early adulthood, started out green and turned to gold, went from zero-to-hero…), isn’t nearly as interesting as how he got BACK into it. Fast tracking the amateur ranks, the ripples of his standout performances led to an array of opportunities with pro outfits such as Mercury and Prime Alliance. 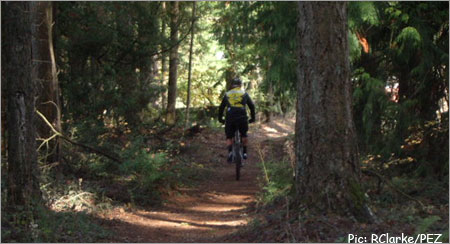 The closest most of us will ever come to drafting off Svein Tuft.

After standing firmly on the doorstep of the European peloton, Tuft became increasingly disillusioned with the various expectations to be competitive. With enormous talent, but no desire to tinker with it in the name of competition, Tuft conceded he was finished with the sport and returned home.

“Honestly, I was just burnt out. Being away from home, with the travel, and pressure and stress of stuff- it all adds up. Besides, this is the best place on earth- why would I want to be anywhere else?”

But his time away from racing was not spent in vain. He bike toured, climbed mountains, and backcountry camped in the dead of winter for weeks on end. This is a guy who once rode his bike, trailer in tow, from Vancouver to Alaska… and back. While racing wasn’t on the agenda, for Tuft, training always was. After a 2-year hiatus and much deliberation, he realized that he might as well put all his efforts to use and get back into racing. But this time he was going to do it with an emphasis on clean riding, and surround himself with those who felt the same.

Once word got out that Svein Tuft was back on the market, a local start-up called Symmetrics came calling. Their modest plans for healthy, clean competition and the development of local talent were too appealing to ignore. And the rest … well, you get the picture.

“Their message was what I needed to hear. The team wasn’t about cut-throat racing- but instead more of an atmosphere where the riders knew they had a place to develop and race at their own pace. That was something before I left that the big teams just couldn’t offer.” 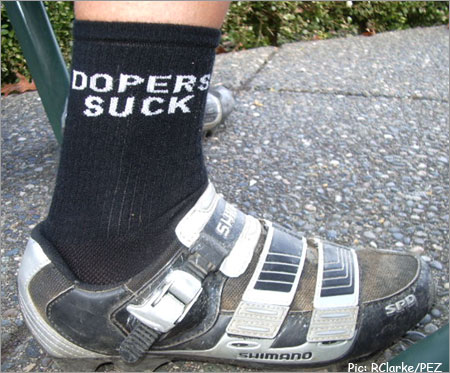 His, and the Team’s, message is clear…

While Tuft and co. slowly garnered results, they had yet to prove themselves beyond the Canadian national scene. But eventually chipping their way at big races like the Tour of Georgia and bolstering their roster with seasoned veteran Eric Wohlberg and Espoir powerhouses Cam Evans and Christian Meier, all came to fruition in 2007.

Tuft rode into some early-season form and took the Tour of Cuba in February. This set the tone earlier than usual, but led to some strong legs heading into the inaugural US Open Cycling Championships in April. Tuft was hesitant about the team’s chances, and admitted that one-day races are often a big gamble for smaller teams.

“I told Kevin (Cunningham, Team Director), ‘Listen, this is a total crapshoot.’ You go a long way, without the support and budget of the big teams, so who knows what could happen.” 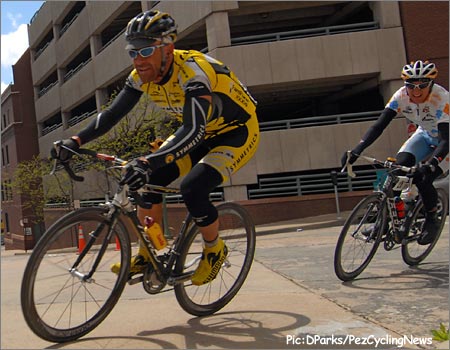 Leading the final selection at the US Open.

And the unexpected did happen. Riders were greeted with morning temperatures of -7C, snow and heavy winds. But while others were simply biding their time until the team car scooped them off the frozen Richmond, Virginia streets, Tuft thrived in the unforeseen elements. Relying heavily on his grizzled backcountry disposition, he barreled his way into the winning break with Patrick McCarty of Slipstream-Chipotle. After biding his time, a final surge 10km out on the closing circuit left a frigged McCarty stiff-legged and Tuft soloed home to write himself into the record books. 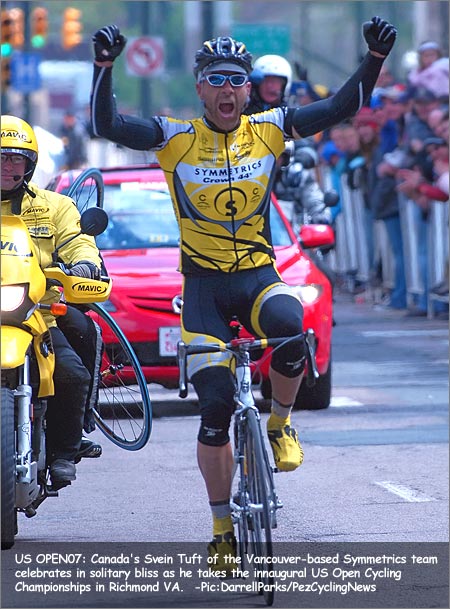 But while the accolades would continue to amount, eventually landing the 30-year old in the UCI America Tour White Leader’s Jersey, he is insistent that his team always comes first.

“Honestly, I could care less about the personal stuff. I don’t plan my year around results. If the legs are there, great. If not, we’ve got a fresh rotation of guys who can get the job done.”

So the emphasis turned from winning to consistency, and Tuft focused his efforts on maintaining his lead in the hotly contested Continental Tour. 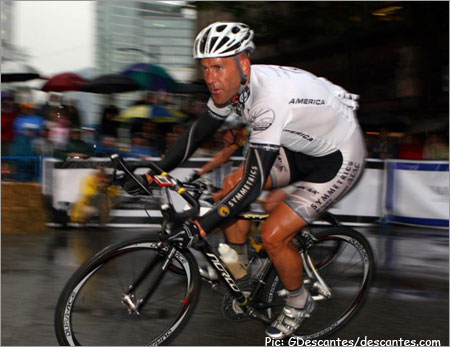 Keeping an eye on things at Vancouver’s Tour de Gastown.

“Sure, it’s a burden. When you’re used to attacking over and over, it’s a big change to riding tactically and not chase everything down. You only have so many matches, so having a strong team behind you makes all difference in the world.”

Consistency was indeed what Tuft and his Symmetrics Fuelled By FarmPure team were able to accomplish, and a healthy dose of results at all the right races eventually kept them in the Jersey for good. 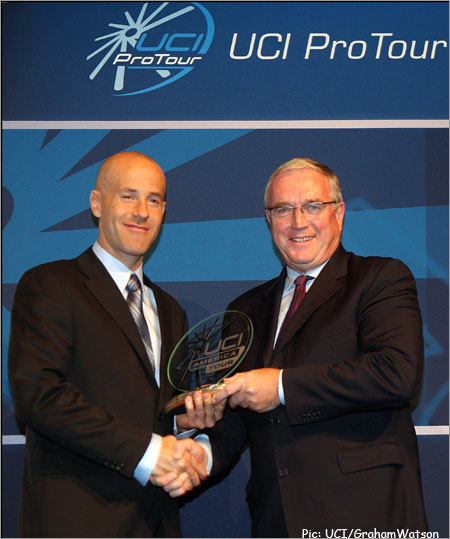 Tuft was most recently in Italy to receive the official award as UCI America Tour winner, and Symmetrics Fuelled By FarmPure picked up Top Team overall for their efforts. And while big-time offers continue to filter in for Tuft, he’s happy with where he is.

“Look, we’ve got an ideal situation here. We live together, we train together, we race together and we suffer together. And we couldn’t be happier. We’re advocating clean cycling and a healthy lifestyle… and actually doing it. How many other teams do you know can say all that?”

And about the World’s? Svein lasted until km 240, when he called it a season.

“Honestly, I was pretty burnt. Some of us start racing really early and work the full year to earn that Worlds spot. Then you’re racing against a team like the Italians coming with 9 or 10 guys because they’ve had the previous World Champion. So you’re left thinking ‘Do teams like that really need that much of an advantage, that they need two more guys than everyone else?’” (laughing)

“The race was relentless, and then to do it for 270km? For guys like us Canadians, who race maybe 250km once in the year, that’s hard.”

“For the euros, that’s what they do so I can see why they’re that much better on that terrain. But really a course like that, to me in my mind, to race at that pace you’re kinda asking for guys to be on some special form…”

We’ll see you next year Svein…

TDF’08 Parcours: The Alps To Paris!