For every Dag-Otto Lauritzen or Sean Kelly who slides into punditry; or Sean Yates who relocates from the saddle to the driver’s seat, there are a hundred riders who have to go back to being ordinary ‘Joes’. But the transition back to ‘real’ life is anything but easy, how do they cope? One such rider was Wayne Bennington, a pro in the early 1990’s, who recently shared some ‘reality’ with PEZ…

PEZ Sez:————–
Although many of us (most of us?) have a one time dreamed of being a pro racer, very few ever get to live this rare lifestyle.

Sounds pretty good, eh? Life doesn’t get much simpler than being a pro bike racer – it requires only a single minded focus to love riding your bike every day, and is rarely interfered with by the daily struggles of earning a living, maintaining a household, inspiring a marriage, raising kids – the stuff that makes up life for the rest of us.

What’s more is that most young pros put off both higher education and real world job experience in favour of chasing the pro cyclist’s dream. But while a young pro spends the third decade of his life racing bikes, the rest of us spend these years learning the ropes of how to survive in modern society.

How many of you over 40 wish you were 20 again? The world was your oyster, life knew no bounds, the sky was the limit… at least it was until you set foot out your door and discovered the endless & daunting challenges that lay ahead. At least now, if you’ve been paying attention for the past 20 years of your life, you’ve learned how to handle – and overcome adversity – in all it’s forms.

Shifting from pro cyclist to ordinary bloke as a man in his 30’s is no easy task, as many pros find out.

Wayne Bennington found out, and talked with PEZ about his life as pro and his return to normal, between him taking fares in his taxi at his adopted French home of Troyes.
————–

PEZ: How did you get into cycling, Wayne?

Wayne: My dad was a cyclist, I started racing when I was 12; I did 28-14 for a ten mile time trial and beat my dad! I had no transport, so at that stage of my career I rode mostly local time trials. I won the East Midlands schoolboy championships and developed into a reasonable junior, to the extent that I made the GB national squad and rode the world junior championships. When I turned senior, I went from second category to first category in three rides – I won my first three races; I came to France in 1983 and have been here ever since. 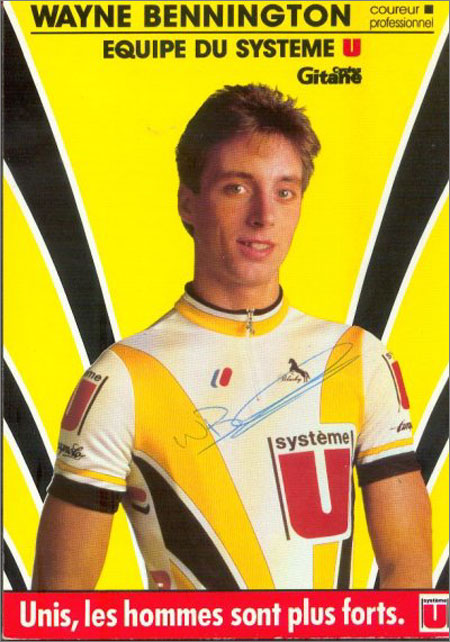 Ed Hood found us some nifty rider cards of Mr. Bennington from a long ways back.

Wayne: I had 45 wins, 32 of those in France. During the 1987 season, the year before I turned pro, I had eight wins, including two classics – Paris-Mantes and the Circuit de l’Aisne. As a result of that success, Jack Andre was able to get me a place at Systeme U, he was a local guy who knew everybody on the scene, if you wanted a door to open for you, Jack was the guy to see; he was a friend of Robert Millar’s too.

PEZ: What was your role at Systeme U?

Wayne: I was a domestique in the service of Charly Mottet and Laurent Fignon; let’s just say the team organisation was “OK.” Mottet was nice, quiet and discrete, just a normal guy, really, but with Fignon you never knew what he was thinking.

PEZ: Did you get any decent results at Systeme U?

Wayne: In the big races, that wasn’t my job, but in the smaller races you got a bit of freedom, if you had the legs. I had some decent placings, but no wins; it’s very hard to win a professional bike race!

PEZ: The move to Z was a big step-up, how did that come about?

Wayne: That was thanks to Robert Millar; we lived in the same region and trained together a lot, when he went to Z he took me there with him after my two seasons at Systeme U. 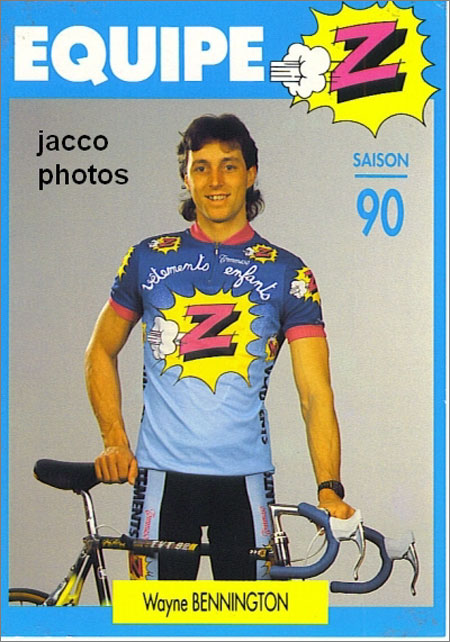 Wayne: It was a good team, well organised and with a proper structure. Greg Lemond was leader and Robert number two, but there were also the likes of Ronan Pensec and Gilbert Duclos-Lassalle; it was a strong squad and I enjoyed my time there. I rode and finished the Giro with Z and had a few good placings.

PEZ: Your contract wasn’t renewed at the end of the second year, why?

Wayne: In 1991, I did nothing, I was ill for most of the year, I’d had a reasonable 1990, but in ’91 I just didn’t get on my feet at all. With the benefit of hindsight, I should have had three weeks off the bike to rest and recover; I would probably have been fine after that. But you know what cyclists are like – you think that you have do be doing more and more training to be going well.

As a result of my poor year, my contract wasn’t renewed; four French pro squads collapsed at the end of that season, so there were 70 French guys looking for contracts. I had raced in the States at the end of the year and got a good result; I think if I pushed it I could have had a ride with a US squad, but my family was in France and I didn’t fancy moving across the Atlantic.

Wayne: It was OK, I was entitled to unemployment benefit in France and I’d bought a house which I was renovating, so I rode my bike and worked on my house, my life was on ‘hold’ I suppose. It was 1993 when reality struck home that I had 40 years left, and had to do something with the rest of my life. I didn’t even contemplate going back to England; my wife and child were in France I’d lived there since 1983 and it was home. 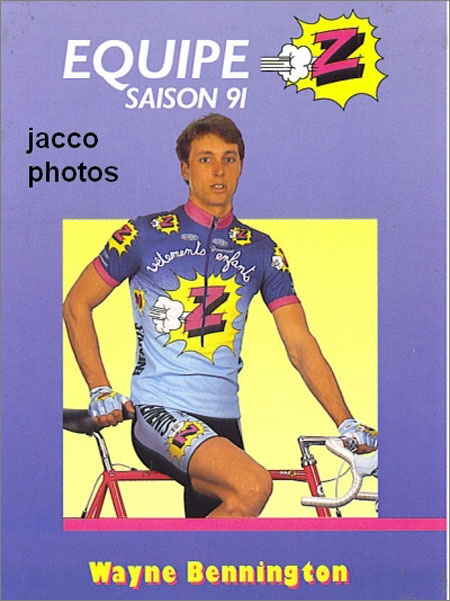 PEZ: Allan Peiper said he found ‘real’ life very hard to adapt to after his pro career was ended.

Wayne: Definitely, it took me three or four years to adapt, I felt that my place was on my bike, out in the countryside; it’s so hard to get into a routine and adapt to normality. I decided to go into the taxi business, which is what I still do, but on the first day I was sitting in the cab, I was thinking; ‘I can’t do this!’

When you are on a pro-team, it’s like being sealed inside a sphere, you go from one nice hotel to another, you don’t realise that normal life is hard, routine is hard. Eventually I adapted and I’ve been driving the cab in Troyes now for 14 years, I enjoy it, no two days are the same, but it took a long time to get used to it. I think one of the things that made Robert Millar so successful was that he knew how tough life outside of cycling was; he didn’t want to have to go back to that.

PEZ: What would you have done differently with your pro career?

Wayne: I would have trained less and rested more, I used to train with Robert a lot and we’d do five or six hours most days. Now I would do maybe one long run per week with more, shorter, faster work; but definitely rest more. I would allow more time to recover after stage races too, I see Pascal Simon (Simon would have won the 1983 Tour de France for Peugeot, had a broken scapula not forced him to abandon) most days, he’s a taxi driver too, he says the exact same thing – we were all over-trained.

Millar was the exception though, despite his frail build, he just seemed to thrive on the hard work. Again, with the benefit of hindsight, I shouldn’t have trained with him so much – I was always tired and gaunt as a result of the workload.

Wayne: Back then, definitely; I was in a bar yesterday to have my lunch and a guy I didn’t know came up to me and said; ‘you were a cyclist, weren’t you – did you take EPO?’ I’m glad I got out before all that started; the public perception of cyclists is that they are all junkies.

I don’t have much to do with the sport now, of course I watch the Tour on the TV and keep an eye on the paper, but I never go to a race and apart from Pascal, I don’t see many guys from back then. It’s just my way, if I am finished with something then I cut-off from it, if you don’t see it, you don’t miss it; it hurt me when I stopped. You still hear the stories, how things have turned bad for a lot of old pros, split from their wife, with all their money gone – ‘cracked,’

Wayne: Not major ones, but when I look back, I was immature; I had a lot to learn about life when I turned pro and it took me a long time to understand that. Those days in races, when it was cold and wet and I climbed-off, I should have thought; “life could be a lot worse than this, let’s just get on with it!”

And The RAPHA WINNER Is!