A few years ago, Veronica Andreasson suffered an almost life-ending accident en route to the Swedish time trial championships. After a couple of difficult years, she’s back and fighting on the cobbles and climbs of the European circuit with the Lotto Ladies Team. We caught up with Veronica for a chat about spices, racing in the desert, training in the snow … and motorbiking!

PEZ: Hi, Veronica! You started your season way back in Qatar in February …
Veronica: I like Qatar, because it’s warm! I always prefer it when it’s warm weather. I’m a Swede so I should be better racing when it’s cold but my muscles don’t like it, I can’t help it! 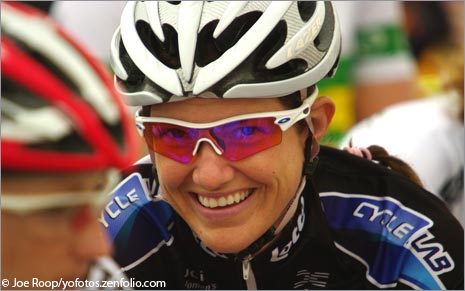 PEZ: Did you get to see much of what must be a very different culture?
Veronica: Last year, we were there a couple of days longer so we could see a bit more of Qatar. This year, it was really short of time. We left the same day as we finished the last stage. We got to know the hotel really well!

The organisation of that race, by ASO, was really good though. Everything was perfect. Before the stage starts, there was a joint leaving time for all race vehicles. So all the team cars go together, the police stopped all the other traffic for us.

Last year, on our side of the highway the motorway was open just for us; on the other side it was just unbelievable, the lines of cars at a standstill for hours. And the roads were totally closed for the racing, too, of course.

It was so windy for stage two this year that it was just crazy. The stage was shortened so we didn’t get to the camel racing track. It was fun to see something really different when we started a stage there last year. 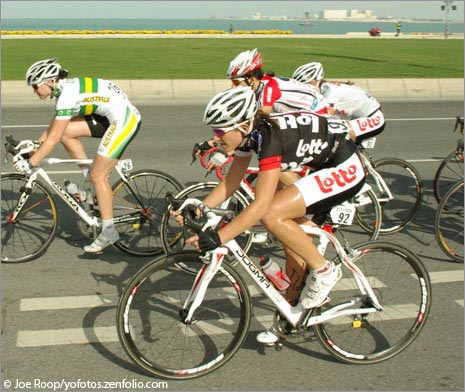 PEZ: Did you get any nice souvenirs?
Veronica: Last year, I bought a mini camel! And also dried cardamom, the spice. In Sweden we use cardamom a lot for making cakes, so I bought a half-kilo … a lifetime’s supply! Normally for a cake you just use a couple of seeds … I think I’ll have this supply for the rest of my life.

PEZ: In Qatar, you had a big attack off the front …
Veronica: That day it was a really strong headwind. I had good legs from the start, so I thought: “OK, I have to try …”

I attacked in 2009 and it was closer to the finish. This year, it was more like 25kms from the finish. The wind hit the group head-on and the bunch just about stopped so I decided to try. But the group didn’t let me go. Trine Schmidt started to come across so I waited for her, but we didn’t get the gap we needed. You have to try, or you never know.

I prefer to make a strong start to the season. It’s not nice to come to the races and get dropped directly and think: “Sh*t, what have I done this winter?” 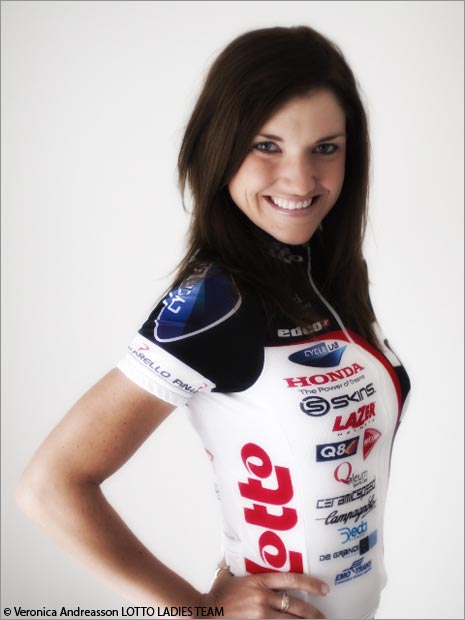 PEZ: Tell us about your new team …
Veronica: Yeah, I feel really good now. I have a new team, Lotto Ladies. I really like the environment in the team, which allows me to push myself more. If I feel the environment in the team is good, if things are nice, then I can perform. I’m living as a cyclist at home with no problems. It’s important that everything around me is calm and relaxed.

I’m really surprised because I didn’t know anything about the team. I only knew Rochelle (Gilmore) because we raced for Safi together. Somehow, I just felt: “If there is a team I will go to, it will be Lotto.”

At the beginning of December (2009), I decided that I didn’t want to stop when things hadn’t been so good. I wanted to feel like I was back. I like cycling too much to just stop, so I got in touch with Rochelle and asked: “Do you have a place left?” The whole team is a good group. 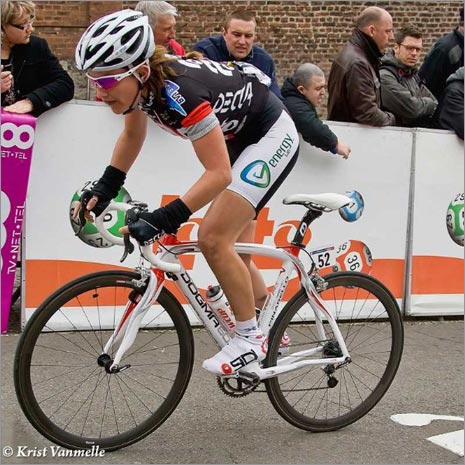 PEZ: A couple of years ago you had that horrendous accident where you were knocked down by a car en route to the Swedish TT championships. How hard was your recovery?
Veronica: The accident … for me I thought I could be back fully fit in half a year. Instead it took much longer than I ever expected it would take. I got sicker much more easily. When you get dropped from the group, you’re sitting there thinking: “What am I doing? This is not me.” It’s not good for the motivation. It’s taken until this year [to recover].

PEZ: So your motivation is back?
Veronica: You can’t say you’re doing women’s cycling because of the money … because you’re really not. I’m doing it because I enjoy it. At least you should have fun when you’re racing and training. It’s nice with this team because I can live at my own home. I’m already living abroad because I’m a cyclist, looking for the best places in Europe to ride and train, so I don’t want to be in a team house. 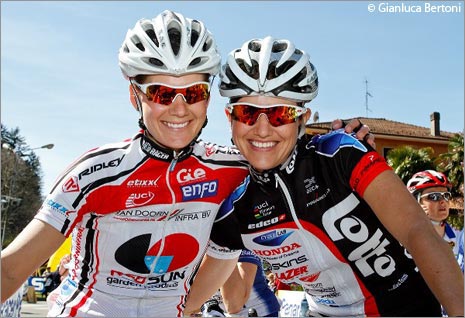 PEZ: The team looks strong all-round …
Veronica: Yes, and it’s great to have a strong sprinter in the team. I’m not a sprinter, but I love to work for someone who is! Rochelle is a really good leader for a race where there’ll be a sprint finish. She is decisive and tells us what she wants.

PEZ: You’re racing on Pinarello bikes this year, right?
Veronica: Yeah, the Dogma! I love it! I hadn’t trained on it before we went to Qatar, but I’d sent my measurements away for fitting. When I tried it the first time, it was like I was at home. I was thinking: “There is nothing I can tell the mechanics to change. It’s perfect!” It’s light and stiff so I have no complaints at all.

Sometimes, when you have a new bike, you have little things to change, but with the Pinarello? No. In the Bigla team, we had really great material for the whole three years I was there. The BMC bikes were tip-top. I was worried about coming to another team that might not have had such good equipment, but the Pinarellos are fantastic. 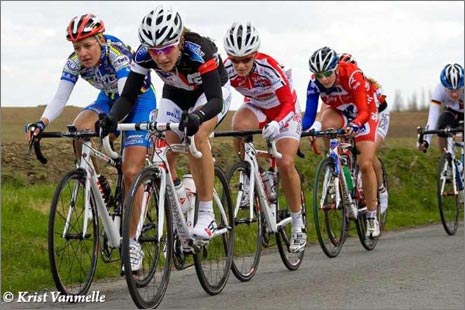 PEZ: How about your training regimen? When you train with Gustav (Larsson, Team Saxo Bank, and Veronica’s boyfriend), and with Garmin-Transitions’ Fredrik Kessiakoff, does that make you stronger?
Veronica: Yeah, no doubt. Normally I always train well in the winter. Gustav and I are both at home so we train together, maybe I’ll do one hour less than him. Sometimes I really have to push myself. When Gustav and Fredrik do the big mountains, they go at their speed and I go at my speed, but we both get good training out of it. If I tried to follow their tempo I would kill myself!

There aren’t that many girls to train with where we live in Monaco, but we have other friends we train with such as Oscar Freire or Daniele Nardello, and some amateur riders. 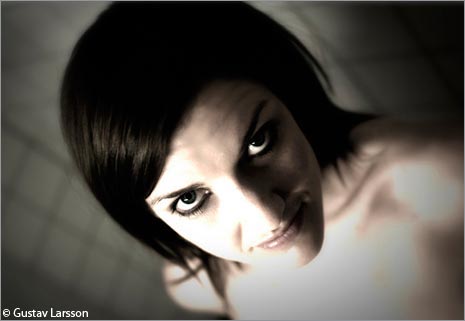 PEZ: I hear your winter cross-training involves skis and not wheels?
Veronica: Skiing is good training in the winter because you’re doing something different. You have the whole rest of the year to sit in the saddle. When I lived in Sweden, I never really skied. Where I lived there was no snow. People down here couldn’t believe it, they thought we’d be skiing to school!

PEZ: You post a lot of videos and pictures on Twitter …
Veronica: Yeah, Twitter was new for us. Last year, before the Tour someone asked if we were going to start using it. It’s perfect because it’s like writing an SMS.

During the Tour de France, I got a small video camera from Saxo Bank. It was just lying in the house so Gustav said I should take it to Qatar and film some things. So now, I put up little videos from the races and so on. People can find us on Twitter at Twitter.com/gustavveronica 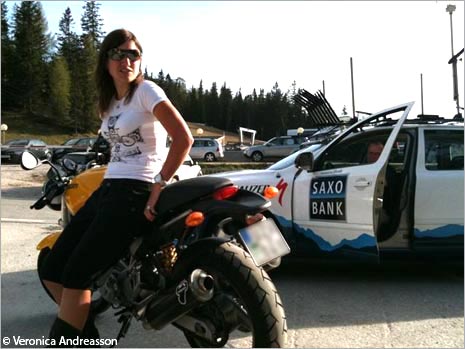 PEZ: Tell us about your Ducati …
Veronica: Last year’s Tour de France on the rest day in Verbier? I took the moto there. The moto is perfect for all those small roads, climbing up the mountains. It’s always easier, but you just can’t take anything with you! I stayed two or three nights, then went back home, just enjoying stopping along the way, having some nice coffee!

When I go on the bike, I can’t bring much rain clothes, so I’m just waiting for the day that I get soaked. It’s more important to look cool!( Laughing)

***
And Veronica has been looking cool, and looking like she’s back to form, on the highways through the deserts of Qatar, over the cobbles of Flanders and the hills of the Tour de l’Aude. Many thanks to her for her time, and for the help with pictures. Good luck to Veronica for the rest of the season and beyond.

And have a look at the website for the Lotto Ladies: LottoLadiesCycling.be.

Toolbox: The Importance of Being Supported