One of the most established cycling journalists around today is former Scottish international rider Richard Moore. His recent biography of climbing legend Robert Millar brought him critical acclaim, his subject some overdue credit … but also reignited the media ‘obsession’ with tracking down the reclusive Millar.

At the Tour, it’s always easier to speak to people on rest days or TT days … so it was that Richard and I sat down with a cafe au lait after fleeing the icy wastes of the Cholet press center in week one to chat about Millar, writing, and a journo’s life on the Tour.

Richard’s book, ‘In Search Of Robert Millar’, was the first in-depth biography of Scotland’s greatest road racer. The purpose was to explore Millar’s enigmatic personality, and Richard succeeded in opening up an email dialogue with the legendary and reclusive climber. 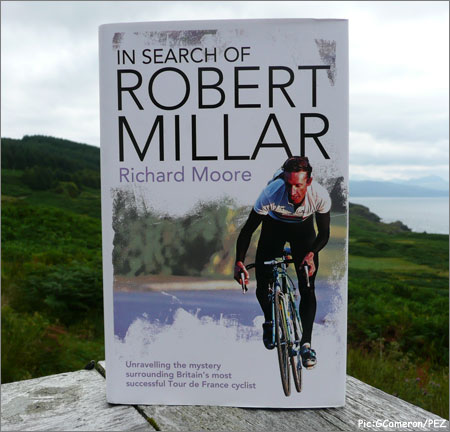 That dialogue continued sporadically, especially after a UK tabloid newspaper claimed to have tracked Millar down, and that ‘he’ was now a ‘she’ called Philippa. “We’ve had a few emails back and forth since the book came out … I think Robert blames me for reigniting the media hunt for him,” admitted Richard to me.

“The book was never about finding him though. I just don’t think he realises, even now, what a profound effect his career and achievements had on people, especially of our sort of age and generation. He was a hero and it was as much about celebrating that as it was about understanding what made him tick.”

“David Millar reviewed the book in a newspaper and hit the nail on the head. Robert Millar professed not to care what people thought of him, but I think he actually cared immensely. One of the criticisms I got from him after the book came out was the story about him being ‘tight’ with his money. He didn’t like that … there was the story about him dodging paying the road tolls. That came from three or four independent sources, so I felt like it merited inclusion.”

We’d been sitting down with Brendan Gallagher from the UK broadsheet the Daily Telegraph – Brendan had been reminiscing about last year’s Tour when he was “… thrown off along with Rasmussen!” “He’d been lying about his whereabouts … they sent him to Manchester velodrome!” laughed Richard. 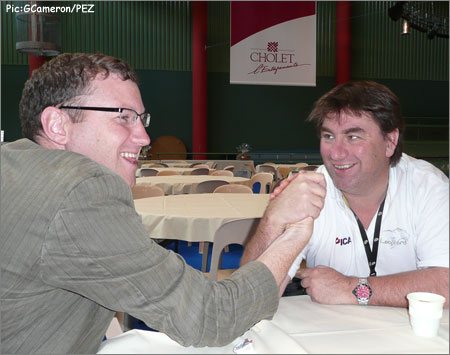 After a completely staged, inter-press arm-wrestle it was time to get down to business, with a few tongue-in-cheek answers.

PEZ: How’s the Tour been for you so far?
Richard: Pretty good. I quite liked the format … no prologue, exciting stages so far, close racing. The transfers haven’t been too long. Company’s been good, hotels pretty average!

PEZ: Was it always the dream to see it as a journalist?
Richard: As a roadside spectator, you’re always kind of ‘outside the race’. You feel as though there’s this bubble that you’d love to go inside and experience it all first-hand.

At the same time, that’s part of the appeal of being a spectator … that you only get to see it as a blur passing. The excitement is the anticipation. That moment when the bunch passes gets frozen into your brain and is really powerful. The experience of being a roadside spectator is better in some ways as it’s more intense, even though it’s a fleeting moment.

Being a reporter, you’re with it the whole time. It’s not as intense an experience, but it’s still pretty enjoyable. There’s a lot of people would like to be inside it all.

The great thing about cycling – and I cover other sports as well – is that the riders and managers are so accessible, and they’re often very friendly and helpful. Even the primadonnas are accessible! As primadonnas go, they’re among the better ones … 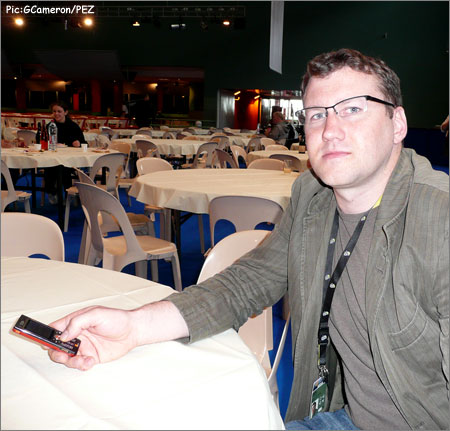 PEZ: Who are you working for on the Tour?
Richard: I’m freelance. I do stuff for the Scotsman, the Scotland on Sunday….. I’m writing the Guardian and the Observer, too. I’m doing a couple of other newspapers and Cycling Plus magazine. Some reports for BBC radio. I just aim to pick up as much work as I possibly can.

PEZ: This must be a pretty intense period then. You can’t turn anyone down…
Richard: Well … you can and you have to sometimes. I want to be doing a good job. I’d rather do one really good piece of work than a couple of average ones.

The first year I came, it was almost as an experiment, hoping I could pay my way round. It was just to see if it was possible.

The publications I work for freelance aren’t going to send me to the Tour, so the only way of getting to cover it, which I’ve always wanted to do, was to come on a freelance basis and to try and get enough money to pay my way round.

There’ve been some big stories. The first year (2005) was Lance Armstrong, the second year was doping … the third year was doping! … and I think that’s helped. This year will be my busiest on the Tour. I’d rather find good stories than just bash out six race reports every stage.

PEZ: Summarise a ‘typical’ Richard Moore Tour day for us …
Richard: I’d say a leisurely rather than early start as the stages begin late for TV. Breakfast about 9 am, leave soon after that and head to the start village. Get some coffee, get the papers, maybe meet some riders as they come in.

Go round the team buses, chat to the riders and managers. Leave just as the race does, and drive the ‘Hors Course’ route – the alternative, off-course route. Get to the finish as soon as possible, usually after a two or three hour drive.

That gives you roughly two hours in the press room to check your emails, watch the stage. Then go out to see the finish, catch a few riders as they come over the line. Back to the press room to write up your stuff. Finish between 8 and 9pm. Then dinner … then bed about ….. one in the morning, I guess!

PEZ: This is my first year on the Tour, so there’s a lot to get used to ….
Richard: It’s pretty relentless, isn’t it? It helps to have someone share the driving. I’m here with the Procycling magazine guys, Ellis and Daniel. We all have different skills: Ellis is the navigator, Daniel can drive, I’m good at parking.

PEZ: Biggest change since you started out…?
Richard: Lance Armstrong isn’t here … simple as that! The first year I came was his final Tour. I knew that year there would be a big story whatever happened. With Lance, there was an Armstrong story every single day.

He’s a huge loss because he threatened to become bigger than the Tour. Since he’s gone, and Basso and Ullrich aren’t around, you kind of feel the Tour’s missing a big star, a ‘patron’ if you like.

Armstrong was so dominant in every sphere, not just in the race. I suppose 2005 was almost innocent … it was pre-Operacion Puerto, which was so sinister and on a bigger scale than the Festina thing in 1998. It crossed so many teams and seemed to implicate anybody who was anybody. It was more depressing and you felt that the Tour, and the sport, was really threatened. 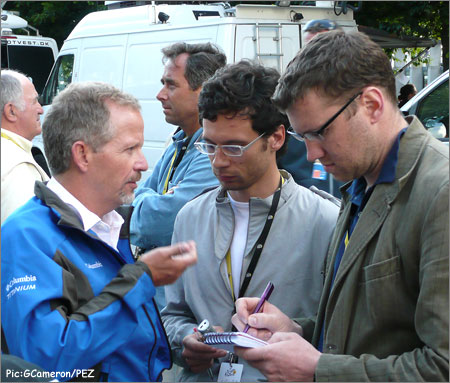 PEZ: What sort of editorial guidelines and pressures do you have?
Richard: Well, some of the papers … one like L’Equipe, as an example … will have several different journalists here, all working to slightly different agendas.

By comparison, the British audience doesn’t have such a breadth of knowledge about the Tour so there’s a bit more freedom to find interesting stories. That’s a nice position to be in.

Last year, my sports editor at the Scotsman had read my Robert Millar book and liked a little story in there about Charly Gaul, so he announced that he wanted a feature on Charly Gaul, and that he didn’t really mind what it was hung on.

PEZ: What’s the deal writing for the daily papers as well as the Sunday papers?
Richard: You’re always planning ahead for the ‘Sundays’- that’s the nature of it. You always try to keep ideas at the back of your head for the Sunday. It’s usually a bigger feature.

PEZ: How do you handle the ‘grind’ of the Tour?
Richard: You’ve got to pace yourself. Daniel (Friebe, Procycling mag) was saying he doesn’t think he’s a ‘General Classification journalist’. He’s saving himself for one or two key stages. I’m a Max Sciandri-type ‘transitional journalist’, an opportunist, looking for stories and going for them. I’m not going for the overall!

In that case, I’ll try to imagine myself as a Cavendish or Cipollini, pulling out before the Alps in the final week! Thanks to Richard for sitting down with me. You can find his books (‘In Search Of Robert Millar’ and ‘Heroes, Villains and Velodromes’) at all good bookstores now!