Welcome to the off-season. It’s 10am and Geraint Thomas answers my call to give the umpteenth interview of his day. The road-racing year may be over but there are still sponsor’s commitments to fulfil off the bike. En-route to a job for his team’s paymasters, it’s a chance to find out about what’s been a huge year for Team Sky’s Welsh wonder.

Geraint Thomas has been racing at the elite level on both road and track for a long time already, but he’s still only 24. After world records and Olympic gold medals in Beijing and being the ‘Benjamin’ of the Tour de France in 2007, the season just fading from our memories has been a big step up for the Welshman with a string of top performances. Here’s how things looked from Geraint’s perspective …

PEZ: What’s the background hubbub?
Geraint Thomas: We’re on the way to London in the car, me and Ian Stannard. Fran (Millar, David’s sister) is driving. Chauffeur-driven! We’re travelling in style!

We’re going to shoot an advert for Sky, celebrating their 10 millionth customer. There’ll be me, Stannard and Brad Wiggins, as well. 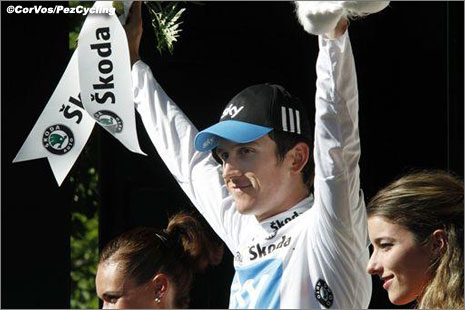 PEZ: What’s the verdict on Geraint Thomas’s 2010?
Geraint Thomas: Pretty good actually! I never really expected it. Obviously the Tour de France was a massive surprise for me, even although I knew I was going well. I wanted to do something in the prologue (he was 5th) and then I got second on the stage to Arenberg and to get the white jersey was a massive bonus.

PEZ: Have you framed up your white jerseys yet?
Geraint Thomas: I haven’t actually! They’re all in my wardrobe. I’m not quite sure what to do with them. I’ll give a few to charity and to people that have helped me, the local bike shop and people like that. 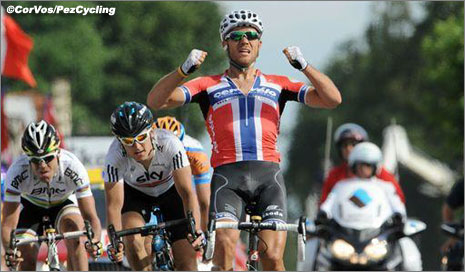 PEZ: You came second on the Tour de France’s epic stage three to Arenberg, the day Frank Schleck crashed out – what did it look like through your eyes?
Geraint Thomas: It was a bit weird really! I got through the crash OK and managed to close the gap to the front. It wasn’t until after the cobbles that I looked behind and there was nobody there. I thought … “This isn’t a bad group, is it?!” Fabian Cancellara was just smashing it on the front, and I was sat behind Thor Hushovd who was sitting behind Cadel Evans. It was surreal.

What was good was that there were a few more cobbled sections to go after that so I had a chance to soak in the atmosphere. I settled down into a rhythm then and could really feel the atmosphere. I had goosebumps going over the last set of cobbles, there were so many British fans and I could hear them shouting my name. It was amazing.

Then we caught Ryder Hesjedal coming into the finish. Sean Yates came on the radio and told me I was going for the stage win! That’s when it really hit home … going for a stage win in the Tour!

I wanted to hit out quite early but it was about a 700 – 800 meter finish straight into a headwind. I’d have just been a sitting duck. I had a go and it definitely did my confidence good.

PEZ: You’ve got previous success on the cobbles … you won the Junior Paris-Roubaix?
Geraint Thomas: Yeah, back in 2004, and I rode the pro version this year, so that stage was only the third time I’d been on the cobbles. Well, the fourth time counting the training we did beforehand.

It’s just something I seem to be able to do well and something I’m really looking forward to next year with Flanders and Roubaix again. 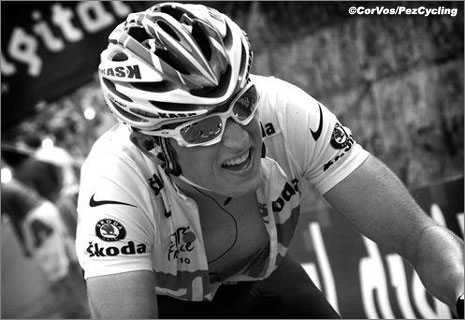 PEZ: Will you be a ‘protected’ rider for those races?
Geraint Thomas: No, I don’t think I’ll be a ‘protected’ rider but I think I’ll be one of the guys there at the end to help Juan Antonio Flecha and Eddy (Boasson Hagen) and whoever will be around them. I’ll aim to be one of the guys there in the last 50 or 60kms to do what I can to help them out.

PEZ: It’s not just the cobbles … you seemed to be able to handle the hills in the Criterium du Dauphine.
Geraint Thomas: My weight was better and I was able to climb better. This year was all about just racing everything, giving as best I could.

I was quite surprised. I was 21st overall in the Dauphine. Me and Pete (Kennaugh) rode up l’Alpe d’Huez steady really. If we’d gone flat-out I’m not sure how much faster we’d have gone but I’d have been knocking on the door of a top 15 which would have been crazy. It’s been a massive year, and I just have to keep doing what I’m doing and try to find what I’m truly best at in the next couple of years and maybe specialise a bit more.

PEZ: You also have a nice British road champion’s jersey to wear, too …
Geraint Thomas: That was amazing as well, Sky had a really good team there. The course helped us out a lot because it was so selective. We didn’t really have to race too hard, it was more just the road that split it up. The conditions made it tougher because of the heat.

It was weird to be there in the front with Stannard and Pete (Team Sky landed a 1-2-3 on the day) who I train with. I’ve grown up racing against Stannard, so it was weird riding the Nationals with just us three left. It had a training ride feel about it.

I’m not saying it was easy though (laughing) but to be there with your mates was weird. 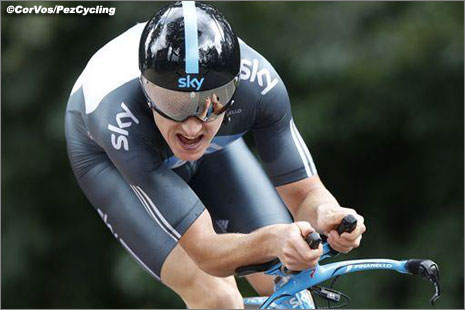 PEZ: How did the Team Sky dynamic gel this year?
Geraint Thomas: There are a lot of good guys. Obviously Brad and Steve (Cummings) crack a lot of jokes and they’re good to be around, a good laugh. When the team was selecting riders, they weren’t just looking at results but at personalities and how they’d fit into the team.

Here, everyone in the team can speak English very well and that makes a massive difference.

PEZ: How will you split your time between the UK and Italy next year?
Geraint Thomas: It’s always tough, but I’ve got the Tour Down Under on the road and then the track World Cup in Manchester. I’ll be racing quite a lot after that. I may be based in the UK until the Classics, but after Paris-Roubaix I’ll be down to Italy to the hills and get some good training in there.

PEZ: So, you’ll be back to the flat in Quarratta …?
Geraint Thomas: Well, I’ve got a flat there, but I’m just moving out. I’ve been in it for three years and I fancy a bit of a change so I’m looking for somewhere else to rent. I’ll still be in the same town.

PEZ: Your time on the track has been amazing. Gold in Beijing in the team pursuit, and a phenomenal time in the World Cup Individual Pursuit. Will you change anything in your approach to this track season?
Geraint Thomas: Nothing really. I’ll do the World Cup in February and take the same approach as before. I’m disappointed that the Individual Pursuit isn’t on the Olympic programme anymore but I can’t do anything about that. It’s a shame as there are some really fast riders for the event and it would have been a great race. I’m really looking forward to London 2012. We didn’t really see how massive it was in Beijing because we were in our own little bubble, but this time in London, it’ll just build and build and I hope I’ll get a chance to soak up the atmosphere and find out what the Olympics is all about.

PEZ: You’ve been introducing the joys of Welsh cakes to Team Sky …
Geraint Thomas: They are good! I found them in Tesco the other day … everyone seems to like them. They’re like flat scones, a bit denser but much better. You can’t get better than Welsh cakes. They’ll be more common on the team bus next year.

PEZ: That bus has been a big talking point this year …
Geraint Thomas: It is made to be comfy for us, so the seats go back, the footrests come up. It’s like being in a hotel. You can relax and it’s a massive bonus especially when you’ve got long transfers like we had in the Tour of Britain.

There was so much hype about it so people were expecting big things and I don’t think they were disappointed. It looks pretty cool from the outside. Some people have said we look like we’re ready for battle when we come out with our shades on. You definitely feel good turning up in it! 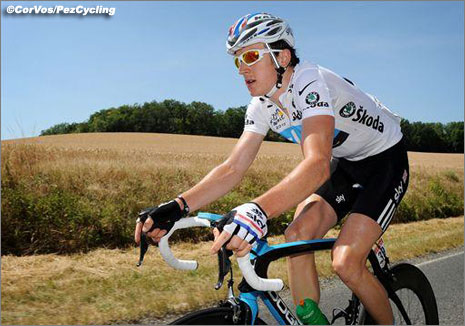 PEZ: For some people, the hype and the results haven’t matched up for Team Sky, but it was a pretty good year, wasn’t it?
Geraint Thomas: Definitely. In Britain, the Tour is all a lot of people know about cycling so if you don’t get what you want out of that then your year’s been crap. That’s how people see it.

It’s been a really good year. We won stages in Paris-Nice and Tirreno-Adriatico which were massive. We had the pink jersey in the Giro. We won the TTT in Qatar which was the first race for all of us out there, and won it quite convincingly. It’s a brand new team and we’ve learnt so much this year. I think we’ve done well for a new team.

We were always going to have critics just because we were new, different. People always have something to say about someone who looks a bit different when they’re walking down the road, don’t they?

PEZ: The Tour de France route has just been announced and stage two, the 23km TTT, looks good for Team Sky …
Geraint Thomas: We’ve got some good guys to go for that so it’ll be a big focus for the team and especially with it being on stage two whoever wins that will pretty likely get the yellow jersey. We’re really up for it. There are a lot of other good teams for the TTT but we’re going to go there looking to win that.

PEZ: Who should be watching at Team Sky next year?
Geraint Thomas: Me! Just the usual guys really, but there have been a few good additions like Rigoberto Uran and Alex Dowsett. Eddy will just get better and better all the time, he’s a massive talent.

***
With a few miles still to motor down to London, we let Geraint have some peace and quiet to get ready to do his stuff on camera. Thanks to him for his insights and giving us a few moments of his time, and thanks also to Gayle Howells of Seren PR for helping put us in touch.