It hasn’t been a bad autumn and winter for Danish greyhound, Michael Morkov. An Olympic team pursuit silver, two six day wins (Grenoble & Copenhagen) a contract with Saxo Bank, and now – a rainbow jersey; all achieved with best friend and fellow Saxo Bank man, Alex Rasmussen. We caught up with Michael the day after his Polish triumph.

PEZ: Congratulations, Michael, has it sunk in yet?
Michael: I still don’t believe it, I’m sitting at home watching TV and I keep seeing us on the news! 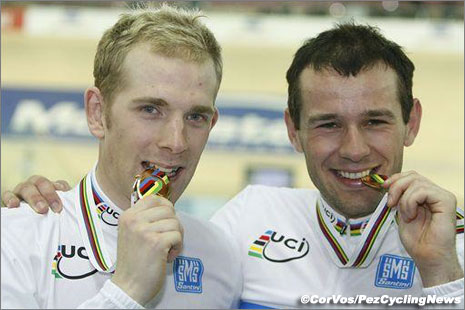 PEZ: What was the game plan?
Michael: After I didn’t ride the final of the team pursuit, (which Denmark won) there was no way that I wasn’t going to win the madison. Normally we would settle in and wait a little, but we won the first sprint – Alex is very motivated, the Saxo Bank training camps have done him a lot of good; made him very strong. In the sprints, before, he used to move around a lot on the bike, but now he’s very still. After that first sprint we grabbed some more points and we were in charge of the race from there.

PEZ: Who were the danger men?
Michael: The Germans Kluge & Pollack are strong and clever but the Russians are strong, the type of riders who can steal a lap. Cavendish, of course – he’s been world champion twice. And there were good six day teams to watch – Marvulli & Aeschbach (Switzerland)and De Ketele & Mertens (Belgium). 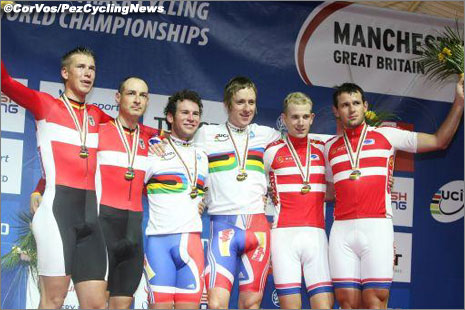 Morkov and Rasmussen have been close before…

PEZ: Peter Kennaugh, Cav’s partner, said that it would have been a different race if he hadn’t crashed.
Michael: Maybe they would have got silver, but they wouldn’t have beaten us.

PEZ: What makes a great madison rider?
Michael: You have to be clever, if you look at Bruno Risi, he knows exactly when to go and when to save energy and recover. A lot of what makes a good madison rider is inside his head; you get very strong guys, but they make bad decisions – you must maintain an over-view of the race. But as well as the intelligence, you have to be strong and fast – it’s the ultimate test of a rider’s all round abilities. 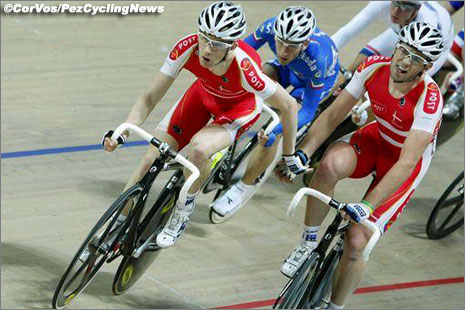 PEZ: What’s the difference between a World Cup or Worlds madison and one in a six?
Michael: There’s a big difference; you ride higher gears and the racing is much more intense. In the Worlds there are sprints every 20 laps, that’s not usual in a six. The Worlds is faster and there’s also more chasing from the peloton.

PEZ: Marvulli was one of the first to congratulate you, after the race.
Michael: Yes, that was a nice feeling, he’s a good friend and I have a lot of respect for him. This title is something I’ve always dreamed of and Franco has won it twice before; to be congratulated by him means a lot. 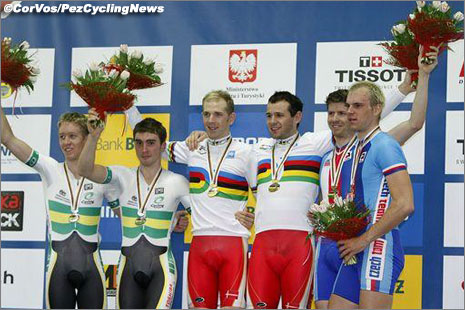 PEZ: I noticed you were riding special skinsuits.
Michael: Yes, speed suits, we had them made for the Olympics, they’re very tight, but comfortable and let you breath. They’re very difficult to get into though, so you wouldn’t use them in World Cups, just the Worlds or Olympics.

PEZ: Were you disappointed not to ride the team pursuit final?
Michael: No, but it was difficult for me that I almost had a world title in my hand and it slipped away. At dinner that night, the guys were sitting in their rainbow jerseys and I was just in my tracksuit – yes, a difficult feeling. (In years gone by, all riders – up to six – who participated at any stage of the team pursuit would be awarded a gold medal and rainbow jersey, but now, only the four who ride the final are awarded jerseys and medals) It made me very determined that I wanted my own rainbow jersey! 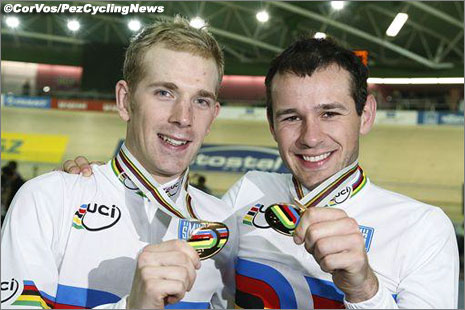 PEZ: Heiko Salzwedel was your coach before but he moved to GB, who is it now?
Michael: His assistant, Sven Meyer has taken over, he’s only 23 but very talented – one of the best in th world.

PEZ: Alex rode Kuurne, you rode the Tour of Murcia; isn’t it hard to adapt to the track?
Michael: No, normally it’s ok to go from road to track, you have the strength; it’s more difficult to go the other way, from track to road because you don’t have the strength.

PEZ: Do you get a rest now, or is it straight back to the road?
Michael: I have a busy road programme in April, then I get a two week rest period before I come back for the Dunkirk Four Day. Alex and I are riding the same programme, so that’s good.

PEZ: When do you get to show your new jerseys off?
Michael: I don’t know, our home track at Ballerup, Copenhagen is closing so as they can put more seats in – the Worlds are there next year.
I don’t think we’ll have any track races until October – I’m hoping that Bjarne (Riis) will get some nice training jerseys made for us so we can show off our rainbow colours, though.

PEZ: Has Bjarne been in touch?
Michael: Yes, we received a nice message from him right after the race, congratulating us; he said he was very proud of our performance. It’s good he’s recognising our performances on the track, a lot of the road guys think that the track takes second place to the road.

PEZ: And how is Saxo Bank?
Michael: I enjoy every hour of it – it’s so professional, the mechanics, the soigneurs, the riders, sometimes I just think; “wow!” 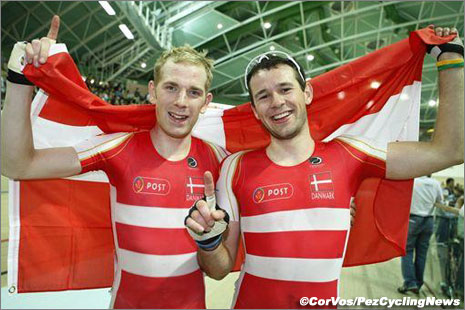 PEZ: That’s your big goal achieved – what now?
Michael: It’s difficult to say – I’ve been thinking about this goal for years. But one year from now the Worlds are on our home track in Ballerup – I can think of nothing more beautiful than defending our jerseys on our home track.

PEZ: Final question; now that I’m going to be a world champion’s runner, do I get a pay rise?
Michael: Mmmm, perhaps!

With thanks to Michael for his time and congratulations to the Michael, Alex and the rest of the Danish team on a great Worlds.

Steve Donaldson: A Warning To Us All!