Question: You’ve got the post-Ardennes classics, Monday morning blues, what do you do? Answer: Find a kermesse, grab a pils and some frites and hope that the sun shines. What’s a kermesse? Pez-Man Ed Hood found, grabbed, and hoped the day after Liege…

Literally, it’s a village fair (there are a lot of villages in Belgium) and most kermesse races will coincide with the village gala or fete, complete with fun fair and vans dispensing all things bad for you – burgers, hot-dogs, frites, beer and – in the summer, dried fish; yup, it’s as bad as it sounds. 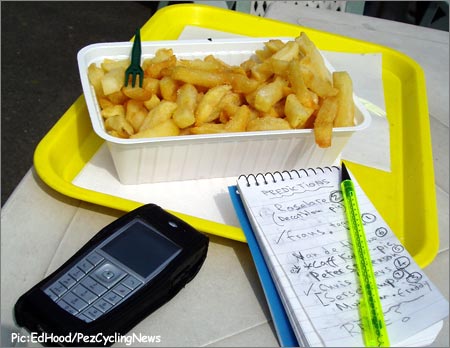 The bike race is part of the gig and will always start and finish on the main street; circuits are usually around five to eight kilometres so the fans don’t have to wait too long between laps. In the cycling heartland of Flanders there’s no choice but to have a flat circuit, but there will be plenty of corners and usually the wind to contend with.

I was still sitting captioning pictures on my laptop when Viktor appeared back from the newsagents; ‘There are two on, one near Ninove and one up close to Antwerp – we’re going there, it’s near where Guy (pronounce ‘Gee’) Smet lives.’ Antwerp is in exactly the wrong direction if you are in Gent and flying home from near Paris that night, but if you are hooked on bike racing like me and Viktor – so what? 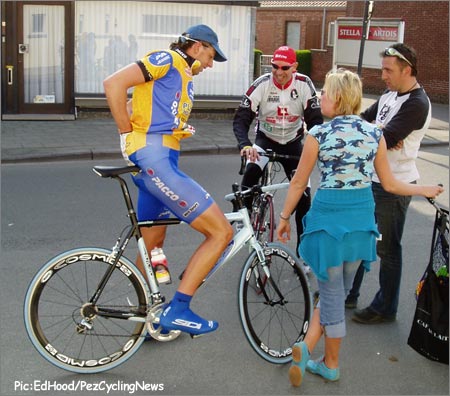 Guy Smet is a giant man, and ling of kermesses.

And who is this Guy Smet dude?
He’s the Kermesse king, 20 wins in 2005 despite having lost half the season due to a broken hip in a crash and 40 (yeah, forty) wins in 2004. Amazing as this is, it’s not the record for kermesse wins, in 1995 Ludo Giesberts won 58 as part of his career total of 500 kermesse wins and in 1996 Benny Van Itterbeeck set the record which still stands of 60 wins in a season – wow!

We gave the auto-route a rest and drove up the old road to St. Niklaas where we picked-up the signs for Sint Gillis Waas, our home for the afternoon.
In Belgium, digging-up roads and forgetting about them is a national pass time, there’s usually a sign-posted diversion but you know that the arrows will stop soon and you’ll be left to your own devices. So it proved, and we drove round tiny back-roads until more by luck than judgement we appeared in Sint Gillis.

You never have to worry about finding the race, the main street will always have crowd control barriers, the PA will be set-up and cars with bike racks will be gathering. 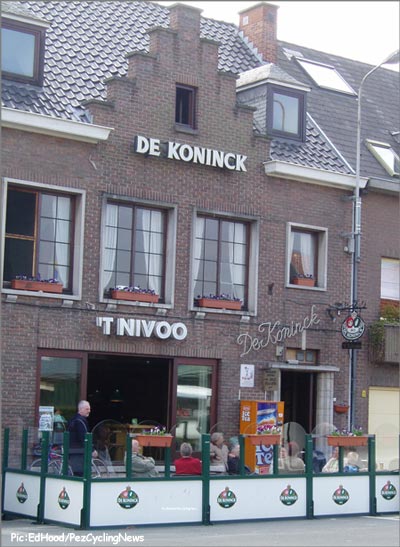 Race HQ was cafй ‘t Nivoo, where Viktor had his first pils of the day, your car-driving scribe had a diet Pepsi.

The pool table had a cover on it and the West Flanders cycling federation officials had the laptop and printer set-up. All entries are on the line, turn-up, hand-over your race license and an eight euro deposit for your number, sign on the dotted line and you’re in – simple as that. A start sheet is printed-off after the last rider has signed-in then sold for one euro. 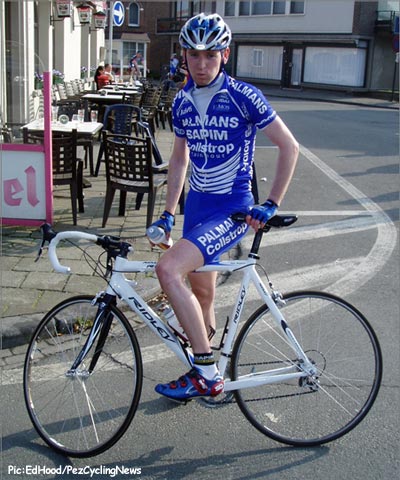 • As we sat in the window watching the riders arrive I saw a familiar face – ace six-day mechanic Ken Illegems, complete with white Ridley. Ken rides for amateur squad Palmans and lives nearby; he’s doing freelance spanner work over the summer and has been starting to show a little form on the bike with fifth in a kermesse the week previous. ‘It’s not a big field today,’ Ken told us; ‘maybe 60 guys but there are ten strong riders here, if they all make it into the move then it will be OK, but if only five make it and the others fight to get up it will be very hard.’

Riders were changing in the back room of the cafe and the smell of beer, smoke and embrocation was over-powering as the 3.00 pm start approached.
As we ambled out in to the 20 degree sunshine to watch the riders warm-up and buy a start sheet, we saw a BIG guy getting his bike ready, it was Smet.
He’s an imposing man, maybe 6’ 3” with long, sculpted legs, weathered to the colour of teak; top guys wear skinsuits with pockets for kermesse racing and the Lycra stretches tight across the big guy’s broad chest.

He runs a plastering company and while the guys trowel on the hard-ball, he shovels on the pain; biz must be good judging by the nice silver Mercedes estate car the bike, pram, wife and baby emerged from.

He wasn’t going to have it all his own way today though, sharing the start line with him were Lithuanians, Mindaugas Goncaras who counted this race among his 18 wins in 2005 and countryman Darius Strole, a big kermesse winner in the past but with only 4 on the board for 2005. (Old Dari isn’t averse to cutting a deal with local riders in need of a win though!) 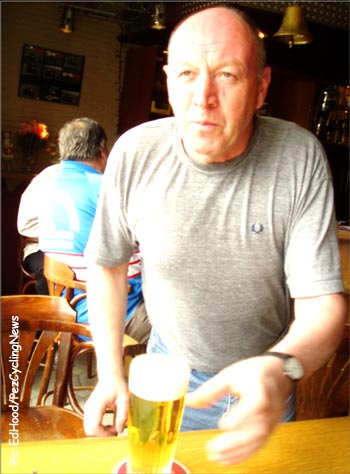 What’s a kermesse without a little pils?

With the church bells clanging on 3.00 pm and the speaker interrupting Boney M, who were telling us that it was a ‘holi-holi-day’, the 60 man field rolled-out for “15 ronden van 7.6 km.”As befits a sunny Monday in a sleepy Flanders village, there was no violent behaviour on lap one as the Ventures blasted-out Hawaii 5-0 and the old guys drank their beers in the sun.

It was lined-out though and Smet cruised along the outside of the string like some great white biding its time before the kill.
Whilst laps two and three saw the same long line, by lap four the move had been made and 19 guys were up the road with Ken trying to bridge-up. 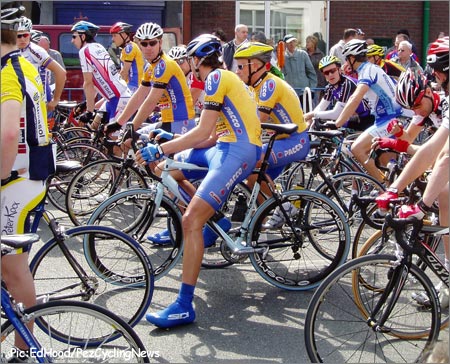 At 3PM this party starts….

Lap five and Ken was resigned to his fate – it’s now a training afternoon for him, over the next laps the gap grew, but the music on the PA was going downhill fast, Abba having given way to Mrs. Mills (ask your Grandma).
We spotted a kid on a bike with frites, a sure sign that frying had commenced, we high-tailed it up to the fun fair for a ‘groeten’ portion, that’s BIG to you.

With three to go the bunch had split and there were now three groups on the course – 19, 20 and 9 riders.

With two to go and Donovan on the PA (ask your Mom), Smet turned it on for the lap prime sprint (he’d ignored these until then) and split the leaders down to nine.

With one to go it was Smet on the front with just little Frank Suys rolled in a ball behind him, his face a mask of hurt in contrast to the impassive concentration of Smet – who doesn’t wear-out many sprockets bigger than the 13. 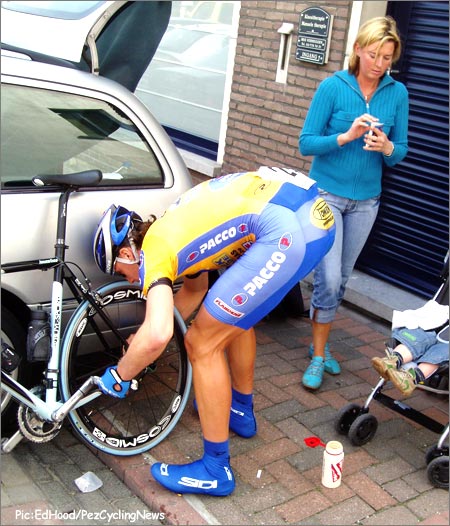 As Ken’s group rolled past, his dad who was looking after the spare Ridley for the day, shouted to his boy; ‘One prize Ken!’ Ken however, was looking a tad pale to me to be motivated by this, but you have to look after your riders interests, eh?

As the street went quiet and the chequered flag was unfurled there was only one guy going to come down that street, right on cue Smet hove in to sight, he didn’t bother to check over his shoulder to check the coast was clear before sitting up and stretching his long arms to the sky for the photographer – another day at the office done.

Home-boy and 2005 pro, Kurt Van Landeghem was next across the line, then Tom Stremesch; Ken missed that last prize, we shook hands with him and his dad and it was time to go.

The drive south – well let’s just say that the Hungarian trucker sending SMS messages from his 18 wheeler at 120 kph in the fast lane failed to nail us and we made Beauvais alive.

WANTED: 20 CEO’s Who Love To Climb