As I’m regularly reminded of, and take great pleasure reminding loyal PEZ-Readers… this job has perks. Like the weekend I spent at Tour de Georgia with the guys from LeMond bikes to introduce their new Triomphe full carbon road racer – which included riding and hangin’ with Mr. Greg LeMond himself…

The two days began with Greg LeMond introducing the new bikes, before handing over the floor to the tech and product guys for the details. Right from the start, Greg’s excitement and enthusiasm about his bikes was evident. He wasted no time introducing himself with a firm handshake and genuine smile to us ‘new guys’. 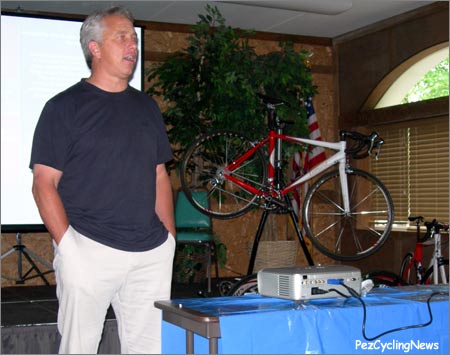 Greg opened the weekend by introducing his new Triomphe all carbon bikes.

But like a bunch of kids stuck in school, the select group of journos was good ‘n ready to bust out of class and get to ‘play time’ – a ride from Helen up to Brasstown Bald, via the smaller pass over Unicoi Gap. As we rolled along the smooth roads through forested northern Georgia, on brand new bikes, led by the first great modern American cyclist… let’s just say the coolness of this was not lost on yours truly.

Like any ride where you don’t know anybody, things were quiet at first, but the group soon paired up two x two and the usual bits of ‘introductory’ info were exchanged.

Over the top of Unicoi the sprinkling rain and traffic kept the descent to ‘safe’ speeds, and soon after we were turning another left hander to begin the run up to Brasstown. With the wind behind us and some speed in our wheels, it was here we caught a glimpse of Greg’s playfullness as he sped through the group, having removed his long-sleeve jersey. In one balletic move that could not have been better choreographed, he tossed the doffed garmet in a perfect arc above a couple riders and straight into the hands of our host Ryan- who was waiting roadside snapping pics. Some moves you just don’t lose – regardless of fitness level…

No matter how laid back, friendly, or chatty Greg LeMond was – thinking up an ice-breaker for 3-time Tour de France winner is intimidating. On our way back down from Brasstown, I had the chance to follow Greg’s wheel as he gapped the group on a fast descent. The lack of a serious chase provided the ice-breaker I needed, and seemed good cause to sit up and chat. And like happens on so many rides – we exchanged info about our homes and families – just like regular guys. 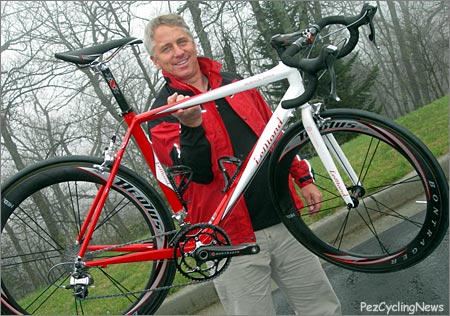 Weighing in with 950gram frames, the Triomphes are plenty light.

Breaking Away With Greg
As we climbed back over Unicoi on our return trip to Helen, the fast twisting descent promised the perfect capper to an excellent day – and reward for topping Brasstown Bald (stay tuned for the PEZ-report on this). Feeling rather ‘frisky’ after unblocking my legs on the viciously steep climb, I was riding at the front and wondering who would start the sprint for the top… With 100meters to go – Mr. LeMond himself comes flying by on the left – out of the saddle full sprint – uncatchable fast. 20 meters ahead he looks back to see who’s up for a chase – so I accelerate to join the fun.

Greg leads over the top and I notice we have a small gap on the rest… but with a great descent ahead, I know what wheel I’m following. Greg grabs the drops and takes off. Click click click – big ring – big gear.

Chasing the Master
Greg’s reputation for going downhill fast is well known, all I think is “Yahoo!!!! – let’s go baby!” and I’m on his wheel – what better place to learn something about descending. He swoops and dives through the turns, and soon we close on a car. I hold back but not Greg – he chases it down and sits a foot off the rear bumper as we swing through more turns. He’s looking for the opening and finds it on a banked left-hander… diving to the inside lane he’s past the car in a heartbeat – I didn’t dare chance a glance at the driver as I followed him… and I’m sure the old lady driving wasn’t expecting a cyclist diving by inches from her window. Just ahead is a Suburban – and Greg sees a nice big draft just waiting for him … he doesn’t have the fitness he once did – but his racing mind is sharp as ever as he looks for every advantage to beat he crew back to Helen. 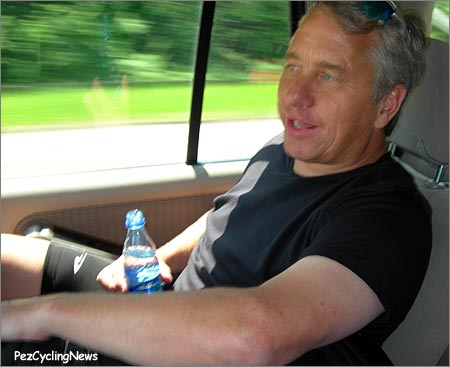 Greg never tired of answering questions from fans or fans pretending to be journos.

We dive through the last turn and hit the flatter run back down to Helen, Greg is about 10 lengths ahead and closing on the Chevy. I snip into 50×12 and give chase – but soon realize I’m not gonna catch him. Fitness or no – he can still wind it up.

Then he looks back and when he sees me flailing, he sits up and waits. The coolness of this does not escape me either.

We hook up and yell over the wind – laughing and wondering how we dropped the other guys… then get down to a little 2-up TT action back to town. Finding myself in this situation… I’m giggling like a school girl, all of a sudden I’m Fignon, or Hinault, or Roche in a breakaway with Greg LeMond…. And unlike most of my racing fantasies – this one is at least partly true.

Behind us the rest of the guys regroup and a few miles down the road reel us in, setting up a fast final run to town – where a sprint to the town sign is contested – complete with debate about which town sign was the actual target.

Later that night I score a seat across the dinner table from Greg – and now that we’re ‘riding buds’ – I feel comfortable enough to ask him about his racing days. The questions are endless, and Greg never tires of giving answers – of detailed answers. His passion for cycling is still strong, and his love of the bike is obvious. I even get a half hour seminar on specific training I should follow to prep for chasing the final week of this year’s mountainous Giro – the advice would have been longer had we not arrived at our next destination… which was… 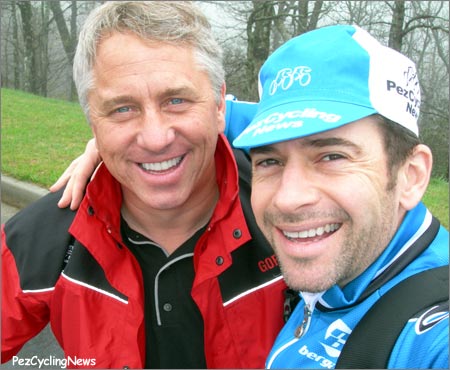 There’s nothing like a self-portrait to confirm your ‘bud’ status.

Reliving The ’86 Tour
At a local bar with big screen dvd, we plug in the 1986 Tour de France dvd and Greg entertains us with commentary and stories from his breakthrough ride. No topic is off limits – most of ‘em introduced by Greg himself – from his battle with Hinault, to his intestinal battle with a bad peach – (I’ll say only that it wasn’t pretty, but had everyone rolling in the aisles – and proved that no bodily function – no matter how bad it hurt, smelled, or looked – would keep Greg from his first Tour win.

The beer flowed, the laughs loud, and stories amazing… but even more amazing is how easily Greg takes on the role of ‘entertainer’. Dressed in t-shirt and jeans, he’s just one of the guys – genuine, down to earth and laid back – but with an energy that keeps him busy with many interests – he recently earned his pilot’s license and now flies himself around the country.

The stories and moments from my time with one of the greatest racers in cycling (like eating too much pulled-pork bbq with Greg’s bud’s from DeFeet socks) could fill a few more pages – but suffice to say the experience was amazing – more than I could have imagined… I’d heard it before about Greg – and was pleased to discover for myself what a sincere, gracious and funny guy he is.

Stay tuned for the Pez-Report on the new Triomphe, and check out the rest of the LeMond line at LeMondBikes.com

LBL06: PEZ Gets In Early