Pascal Ducrot is one of the men behind Scott Bikes’ contribution to Mattias Brändle’s new World Hour Record. He talks Ed Hood through the successful ride and more importantly the bike and the technical in’s and out’s of preparing the Scott Plasma for the Hour Record.

When IAM’s Matthias Brändle took the World Hour Record recently, it was another feather in the Scott cap. Their Plasma time trial frame has been at the sharp end against the watch at the Commonwealth Games and Worlds this season – not to mention much success in the swim, bike, run world – and now it’s grabbed the biggest record there is in track cycling, The Hour.

Scott vice president Pascal Ducrot has been with the company since the days they made those jewel-like, super-light Scandium aluminium frames for the Jean Delatour team – we could think of no one better to ask about Brändle’s record breaking steed: 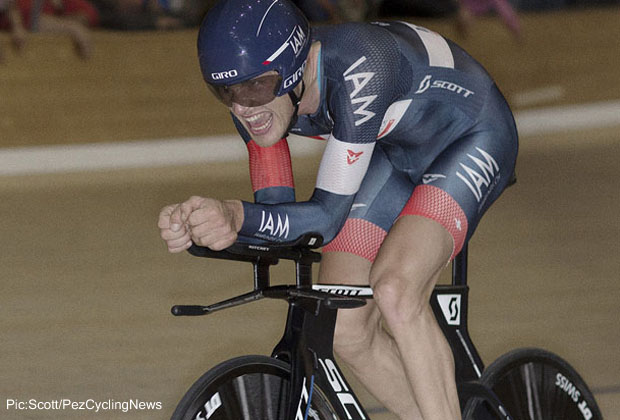 PEZ: Were you surprised when the initial approach was made regarding the record?
Actually we started the UCI homologation process already in June 2014 without knowing if one of our riders would ever go after the hour record. Despite the fact that Matthias only contacted us some weeks ago it wasn’t a surprise to me as he is in excellent form and has the courage to try something like this.

PEZ: What made you believe that Matthias could do it?
His character and his watt output – we all believed 100% that he could do it. Lars Teutenberg did some testing with him already during the year to optimize his aero position on the road and there he already could see that he has the skills and the power.

PEZ: Time scales were tight . . .
Yes, but thanks to Lars’ track experience and his long term thinking most of the stuff was already done before Matthias approached us. Even so, Benoit Grelier, our head engineer still had to work some night shifts to make it happen. Perhaps the biggest stresses were for our marketing crew to make all the arrangements in co-operation with the IAM marketing crew. 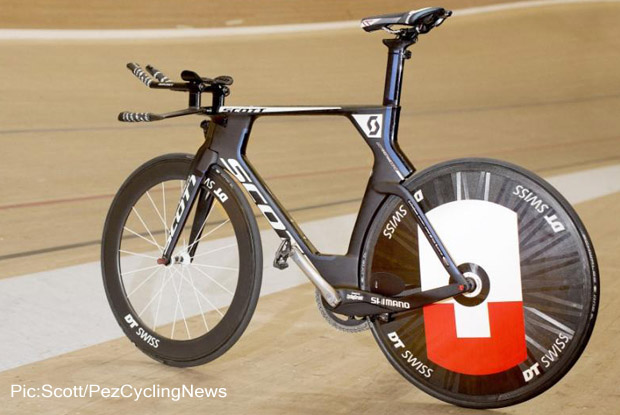 PEZ: The Plasma is now the base for Tri, TT and track machines – a very versatile design . . .
From the beginning of the project (end of 2011), Plasma 5 has been seen as a platform and not as a specific bike. We found a very good combination to stay within the UCI regulations for frame design and position but also to cover the specific needs of triathletes. (The triathlon version comes with front bottle and storage box which for practical reasons both are removable.) Further the Tri version comes with a higher stem to allow a more relaxed position. I guess we have proven that the Platform is successful with a great second place for Orica at the TTT Worlds as well as the other podiums – the fantastic Ironman victory of Sebastian Kienle at the Triathlon World championships in Hawaii and now with the hour record of Matthias Brändle on the track of Aigle.

PEZ: Has Scott had previous experience with track machines?
No, but with Lars Teutenberg we have the necessary track experience in house

PEZ: Is it the same carbon lay-up for the track frame as the Tri/TT?
Yes. 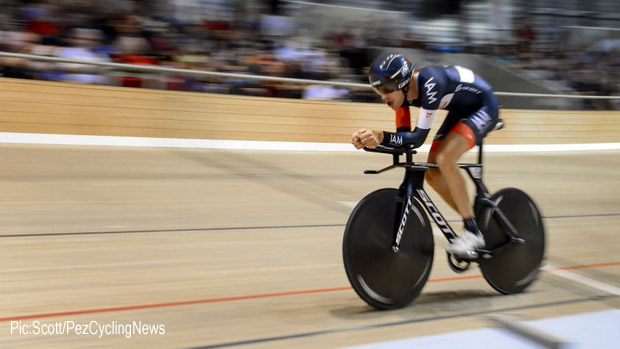 PEZ: How much of the massive gusseting at head, seat and bracket is aero and how much is structural?
It’s actually both. It is always the challenge to find the best solution for aerodynamic and stiffness. In general we went for a wider profile section to achieve higher stiffness at lower weight.

PEZ: I notice you can still see the bottle cage bosses on the down tube.
Yes, we had to go for the quick solution and took stock tubes. Some more time and we would have done main tubes without any drilling holes – sorry . . . 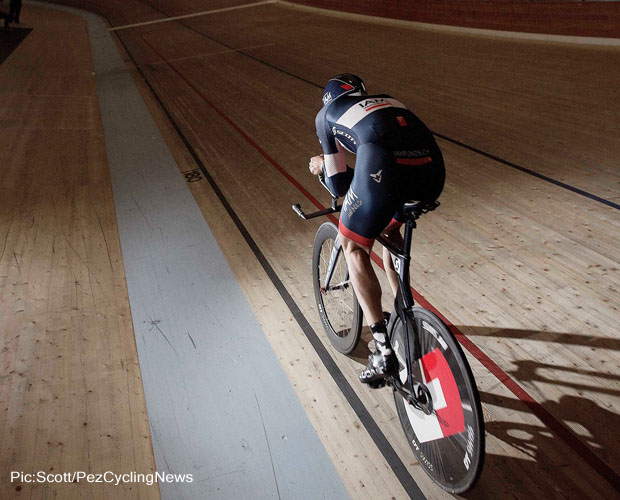 PEZ: Do the stresses of hitting a banking every few seconds impact upon the head bearing set up on the track frame?
This stress is actually very low compared to the high peaks when hitting a hole on the road. This is more relating to lateral stiffness of the bike to stay stable on the black line.

PEZ: Is the bottom bracket height not a little low for the track?
As this frame is only designed and homologated for pursuit/timed events the BB height is no problem. Matthias went with 175mm cranks for the record. 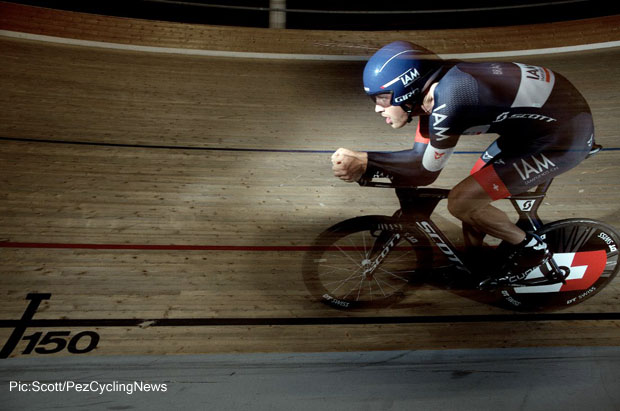 PEZ: How did you adjust the rear end width for a track hub?
We adjusted the axle on the Disc wheels. With DT Swiss we have a very good partner and could react quickly. Rear wheel location adjustment includes a stopper to fix the rear disc safe in place.

PEZ: The rear drop outs don’t look open ended in the pictures I’ve seen?
They are – the wheel was positioned at the very end. It’s actually the same open end version as for the road. 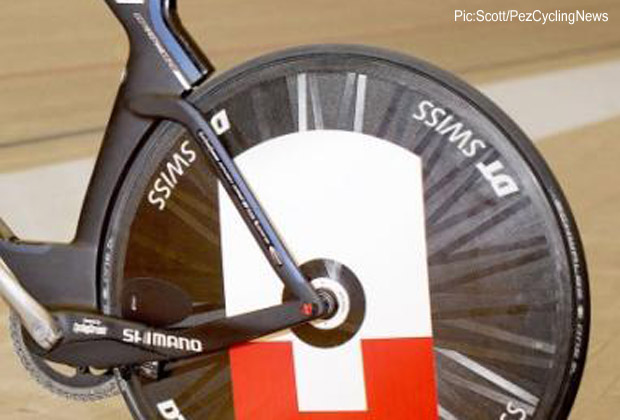 PEZ: How difficult was it to get a perfect chain line for the 55 x 13?
This was just fine tuning with one extra washer to match the SRM with the track cog.

PEZ: Matthias position was nice – how did you arrive at that with him?
He had already done two tests on the track with an SRM on the bike to optimize his TT position for the road. The last fine tuning was done in Magny Cours beginning of September.

PEZ: You equip two top line teams – Orica-GreenEDGE and IAM Cycling, the exposure of pro teams is obviously a key part of your marketing?
Yes, the marketing output on the road in general is high. With Orica and IAM we have the perfect combination which covers marketing needs around the globe. Both teams are completely different at almost every level and this is why the combination is great for us. 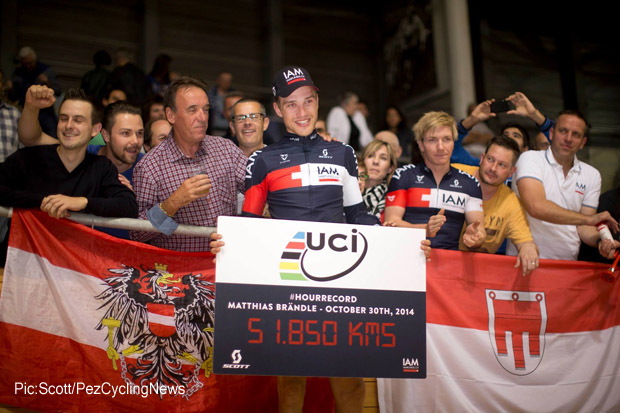 PEZ: An hour on Eurosport – that’s nice advertising.
It’s of course more than just nice advertising. It’s super-important that such event can be seen by a large public. The output would not have been the same without Eurosport on board. It was overall a very lucky event for Scott. Simply a great atmosphere in the velodrome thanks also to all the Austrian fans as the velodrome was fully packed. To get a worldwide coverage on TV and Web was simply outstanding!

PEZ: Can you remember much about the post-record party?
I do remember as I had to leave. Lars Teutenberg on the other hand was the last one to leave and as far as I heard he had a hard time to find the switch for the lights . . .

The full hour on UCI TV:

The challenge of a lifetime: Register now for the Gran Fondo Stelvio Santini 2015