The first team to erode the machismo of professional cycling was the US 7-11 squad which employed masseuse back in the 80’s; it never occurred to folks from the New World that you shouldn’t have women at bike races – but it raised eyebrows in France and heads were shaken over glasses of pils in the cafes of Flanders. These 20 years later, the sport is still not what you would call ‘over-run’ with girls, but it’s better; we caught up with Saunier Duval’s PR, Virginie Ducrot to ask what it’s like being a woman in what is still a man’s world.

PEZ: How did you get the job, Virginie?
Virginie: I worked in PR with Scott (now Saunier’s second sponsor and bike supplier) for five years, but decided to leave and set-up my own agency.

I left Scott on good terms; one of the reasons I moved-on was that I worked for my husband, Pascal and it wasn’t the best arrangement. (Pascal is still with Scott and he will be talked with him here.)

Scott was supplying Mauro Gianetti’s Saunier Duval squad with bikes by this time and one day, in 2005 when Mauro visited Pascal at the office he asked him if he knew of anyone who could handle the team’s PR – Pascal said that he just might have someone!

In the first year of my new business I spent 70% of my time on the Saunier account and that led on to the position I have today. 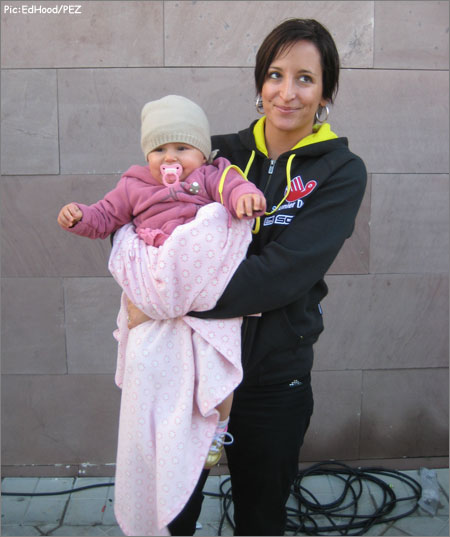 Virginie with the little one: Emmylou.

PEZ: What is your job description?
Virginie: To start with, the team had no organisation as far as the media goes, so I had to set up contact lists, create a website and organise translation services. Compared to the big, established teams, we needed to do a lot of work, but it was good because we had a clean sheet to work from.

I didn’t know much about road cycling, most of the work I did at Scott had been with mountain bikes and ‘freestyle’ sports like wave boarding. The formal atmosphere in pro cycling was something I was unprepared for and of course I had to learn a lot about the sport.

My first experience of a press room was Paris-Roubaix, I felt like an alien when I walked-in there, with everyone looking at me. Since I’ve had the baby, I go to fewer races – just the really big ones, we have a second press officer now, David Garcia and he accompanies the team everywhere; I tend to handle the International and Swiss enquiries.

PEZ: What’s the best part of the job?
Virginie: The memories you build of the things that happen when you are with the team, that first race I covered was Andrea Tafi’s last Paris-Roubaix, you get strong emotions from these things.

PEZ: And the worst part?
Virginie: Sometimes being a mother and working is difficult, but that’s all [you can see why she’s in PR!].

PEZ: What was your hi-light of 2007?
Virginie: We had a memorable Giro, the stage wins were great, but probably the greatest thing was the Tour start in London, being part of that, with all the presentations and having David Millar on the team – that was very special.

PEZ: And the low point?
Virginie: With 29 wins, it was our best season, so there’s not much to complain about; but for me the doping situation was bad. As I said, I am new to road cycling and I was a little naпve about what went on with the doping, last year touched me in a very negative way; but I suppose you only get really upset about problems with something if you have love for it?

PEZ: Are you aware of ‘machismo’ in the sport?
Virginie: I suppose it could be difficult being the only woman among 30 men, but on Saunier it’s more like having 30 big brothers or body guards to take care of you!

Scott was a very progressive company, so it was normal for men and women to work closely together, so from my point of view, it was normal to work with guys.

I think it can be good for the riders to have a female on the team, when they are talking to other riders or staff, they always talk about bikes or cycling, but with me maybe they will talk about babies or what’s happening in the world or maybe their family, it’s good that they are spending time talking about something other than racing.

PEZ: Why Granada for the launch?
Virginie: It was Matxin’s (Saunier DS) idea, the climate is good, there are mountains all round and we knew the hotel from when it was used in the Vuelta – we knew it could accommodate our needs.

The presentation has to be in Spain, of course because it is Saunier Duval: a Spanish main sponsor.

PEZ: What are you trying to achieve with the launch?
Virginie: The main thing is to create a relaxed atmosphere where journalists can meet riders and staff. Some team presentations are very rigid, formal. We try to keep it friendly, easy-going and have a ‘family spirit’ to it.

In the season, when everyone is busy, it’s perhaps not possible to spend time together, so it’s important to get to know people at this time, when there is less pressure.

PEZ: If you could change just one thing in cycling, what would it be?
Virginie: An end to hypocrisy, not just in cycling perhaps, but in life. Maybe I am an idealist, but I think sport should be beautiful, positive about solidarity between people.

I think that the stance David Millar has taken is a good one, he isn’t being a hypocrite, he’s saying what he thinks about what he did and he how he feels now.

RIDE WITH JELLY BELLY At ToC: A WINNER!