PEZ Interview: A Scot In Asia

Scottish rider Alex Coutts, who is a regular interviewee on Pez, has been riding in Asia this season for the Giant Asia Race Team; it’s now been five months since his season started in the Tour of Langkawi. As “The Burntisland Buzzard” is training again in Spain for a hard six week period of racing in China, Japan and Korea, I thought it was about time we got an up-date on life competing in the UCI Asia Tour circuit.

As a junior he was part of the Great Britain squad and rode the World Championships, and then it was off to France to learn his trade before turning professional and living in Italy. His next move was to Belgium where he raced for Flanders, DFL and last year, Babes Only. 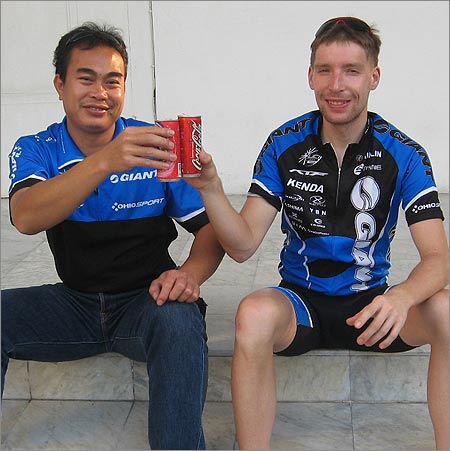 Alex and his kick-boxing mechanic Chya.

PEZ: You have raced in Europe as a Pro for the last five years, was it a shock to go to Asia?

Alex Coutts: Aye, it was a bit! The heat and humidity more than anything else, the racing is pretty much the same, it’s fast and tough and coming from a Scottish winter, you could say it was quite a shock. The crowds are great and so enthusiastic, especially in Malaysia. In Taiwan they were like groupies wanting their photos with the team, that didn’t happen much in Belgium. Oh! And the food!

PEZ: How did it all come about that you signed for the Giant Asia Race Team?

Alex: I guessed that my 2007 team, Babes Only, were going to fold so I started to look around for a new team and nearly road for a UK team. Through David McCann, the Irish International rider who has ridden for Giant Asia for a few years, I was e-mailed a contract while training in Spain, decided it was time for a change and didn’t want to be confined to a British calendar, and going to Asia I would be seeing parts of the world that otherwise I would probably never see, and do a bit of racing!

Alex: It’s a good laugh! The atmosphere is so different, the mechanic, Chyia, is a Thai Boxer and has been about a bit in his time, and then the DS, Wusut, is serious about the racing, but after he likes a good laugh with the lads. The DS also cut my hair in Indonesia, I think it was a Thai mullet which wasn’t so good so he cut it shorter and it didn’t look too bad for a scruffy bike rider!

PEZ: How does the organization of the races compare to the European races?

Alex: The Tour of Langkawi is very slick and professional, but in Indonesia the transfers were long and they would change the start times and you never seemed to know what was going on. The food there also was maybe not so good as a few got food poisoning, including me, I was 59 kilos when I returned and I’ve not been that light since I was a junior! At one of the races a team mate said the fish was great, yea he was ill.

PEZ: Your first race in Asia was the Tour of Langkawi, you got in the decisive break on the first stage, how did that all pan out?

Alex: Surprisingly I missed the start as I was in the toilet, when I came out they had all gone riders and cars. So I had to chase, which was a great warm up. As I got back on I moved up and tailed onto what turned out to be the vital move. After about 80 km’s I started to cramp, which was a bit worrying as we still had 100 to go, but I hung on for 18th, but we had about 20 minutes on the bunch. 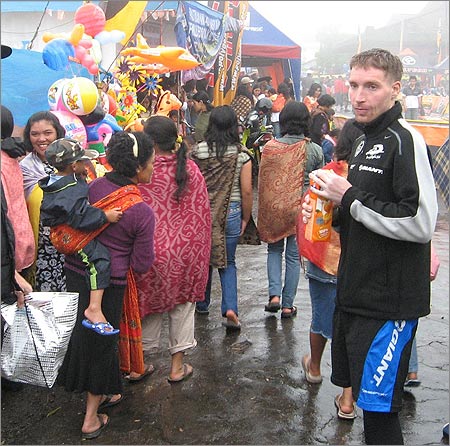 Local color at the Tour of Indonesia.

PEZ: Your preparation for the Tour of Langkawi wasn’t ideal either?

Alex: No, well I didn’t know what I would be doing as I signed the contract about two weeks before I left for Langkawi and maybe didn’t have enough miles in the legs as I had been out riding on a MTB with a hub gear, bags and mudguards, nicknamed “The Tank”.

PEZ: There were some big Euro teams at Langkawi, it must have been a good feeling finishing in front of them?

Alex: All the teams were represented in that break, (except Ag2r and Panaria, – Ed) but most of the local riders are very fast and could race well in Europe if given the chance. People who have never been here or seen the races don’t give the Asian races the respect they deserve, the riders are very motivated and the racing is very aggressive as they attack constantly.

PEZ: What other races have you ridden?

Alex: First Langkawi, then Taiwan and East Java, Indonesia. Lots of Criterium races and a mountain stage to sort it all out. The mountains are long and steep, I’ve been over some big climbs, but there they are something else, bit like the Pyrenees with a jungle at the top.

PEZ: When you are not racing, you are back at home in Burntisland in Scotland, is it hard coming back to the “Old Country” and staying at your mums?

Alex: No, it’s nice as I can spend time with the family and the dogs, something I couldn’t do when I was in Belgium. The hardest thing is motivation and focusing on the job of being a cyclist. One problem is that there is a local cyclist, Micky Mallen, who is known to like a drink or three and is not the most organized person before going to races; I heard he missed his last race! He has been known to ride a time trial in trainers as he had left his house with the wrong shoes, but he’s a good guy and as strong as an Ox.

PEZ: In the past you have not raced much in Britain, but this year you had that pleasure, what has that been like?

PEZ: You’re here in Spain training for the next six weeks of hard racing, which countries will you be going to and which races will you be competing in?

Alex: I’m flying to Beijing then to ride the Tour of Korea, which starts in Japan, then back to China for the Tour of Qinghai Lake, which I rode two years ago, it’s a good race and then after six weeks it’s back to Scotland and see what happens from there.

PEZ: So, that’s the first part of your Asian season under your belt, what are your overall feelings?

Alex: It’s OK, the racing is tough, hard and fast, apart from Taiwan and Langkawi my form hasn’t been great so far, but I hope that is going to change for the end of the season. It’s good to experience racing in a different part of the world. I also feel lucky that I found a Continental team at such a late date and there are so many riders without contracts.

PEZ: Do you miss Belgium?

Alex: Not the cold and the rain, but I do miss the camaraderie of being with team mates all the time and having training partners. The thing about racing in Belgium is that you would turn up at a race and you could be lining up with riders like Boonen and co. I guess I miss the odd Belgian beer, but then I know where I can get a Leffe in Burntisland, thanks to Mad Micky. 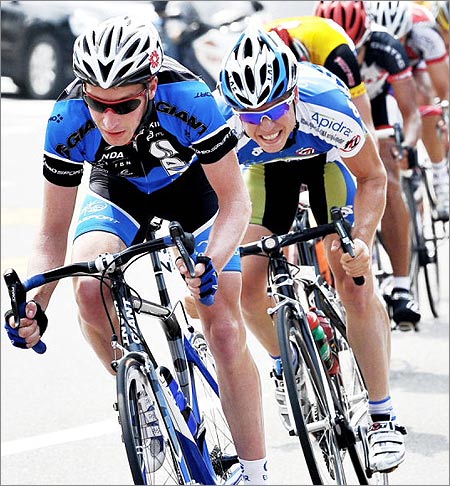 Alex: Being violently sick on a five day stage race and surviving on two pieces of toast and a glass of water to get me through the stage. It’s not the best way to get down to your race weight.

PEZ: And the best?

Thanks very much for giving us your thoughts and experiences of the Asia Tour race scene, which not many of us will ever experience first hand. Good luck for the rest of the season and we hope to catch up again for more of your adventures at the end of the year, remember to keep away from those road side monkeys!

PEZ SOCKS: The Best You Ever Looked!