Even if he considers 2006 as perhaps his worst season ever, Alessandro Petacchi is still considered the best sprinter in the world. We first talked to him in 2003, a few months before his launch into sprinting super-stardom, and we reconnected after the 2007 Giro presentation in Milano. We find him confident, relaxed, and very much in love with his wife Chiara…

He beat Mario Cipollini at the top of his career, when he was wearing the rainbow jersey during the Giro 2003. He is Italian, specifically Ligurian, from that land squeezed between the sea and the mountains that hosts every March the Milano – Sanremo. This is the favourite race of Alessandro who won it in 2005 and dreams to win it again soon. As every Ligurian must be, also Petacchi guards his personal time and his more reserved attitude off the bike is what makes him so different from Super-Mario. 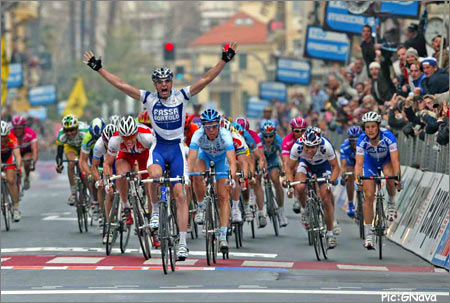 So when he accepted our request for an interview we wanted to find some angle that was different enough as he is from other fast men.

The first time we heard about Alessandro Petacchi was in the 1997 Giro dell’Appennino, a one day race of long tradition, well known in Italy but not so famous abroad. It’s a hard one with a lot of climbs. Petacchi was, together with his team-mate Dario Pieri, out of the bunch for the early brake for more then 100 km. Later on we saw him also in the Paris Tours 2000 during another attack far away from the finish. 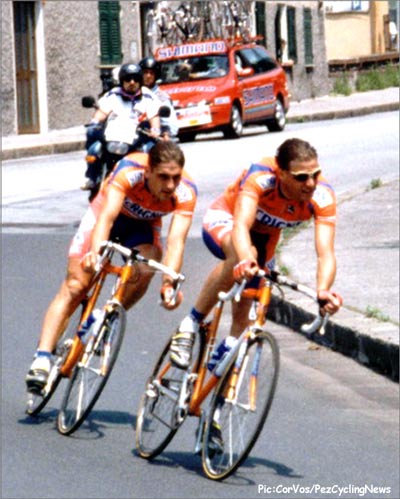 1998 – Petacchi and Dario Pieri on the attack at Giro del’Appeninno.

A Man To Escape
PEZ: Looking back at your early days as a pro, your original attitude was to attack and to make “the race”.
ALESSANDRO: I still consider myself not as pure sprinter. Really I’m not a sprinter but a fast-pace rider.

PEZ: Now your wins come in the final meters of the race, do you have any nostalgia for those old breakaways?
ALESSANDRO: Mmm, I would like to be part of the attacks sometimes but the question is: who would like to share a break with me?

PEZ: And how did you become, as you are, the best sprinter in the world?
ALESSANDRO: I didn’t work for any transformation. I didn’t make any specific work for it because still I’m not a sprinter but I’m very fast especially at high speed. At the beginning the final sprint was not my target. I discovered my attitude time by time and I can remember that I started to finalize my race to the final sprint in the 2002.

PEZ: In any case today you are commonly recognized as ‘Ale-Jet’, sometimes you look so strong that we imagine that for you, at last, it’s not so difficult…
ALESSANDRO: Ehi, there is no one time that I said to me “It’s been easy”. To win it’s never easy, but it’s so difficult to lose.

PEZ: What you mean?
ALESSANDRO: I remember a sprint during the Giro 2004. That time I was really strong, maybe the strongest Petacchi. I remember a stage in the south Italy, in the Puglia region. My team took me to the final sprint in the best position but I accelerated too late and Fred Rodriguez won. That time, I’m still sure, I was the strongest but I lost because of a small mistake. 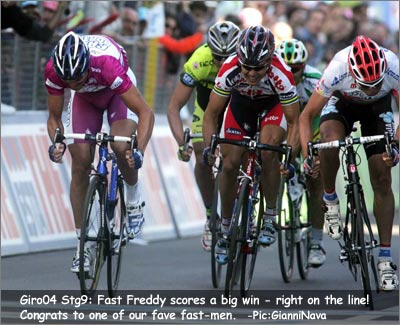 Fast Freddy Rodriguez narrowly beat Petacchi in stage 9 at the 04 Giro, but Ale contends he was the fastest man there.

PEZ: It looks like you remember well your mistakes…
ALESSANDRO: I’m never tired of winning. I think this is something that helps me a lot.

PEZ: You never need special motivations…
ALESSANDRO: My motivation is to win the race.

PEZ: But you win hundreds!
ALESSANDRO: To win a race is something special. The confusion on the finish line, the speaker cries your name, the podium, the photographers. And you know that everybody is looking to you. It’s something I like very much.

PEZ: But it’s something very far from the Petacchi we imagine. You are far different from other sprinters like Cipollini or Boonen who built the modern sprinter fashion with sensational public attitudes and declarations. You appear more… traditional.
ALESSANDRO: For sure I’m more reserved, especially during the public events.
In private I’m really very different. With the friends I’m open. But I don’t want to live many contradictions.

PEZ: Which is the strongest?
ALESSANDRO: I think that to win is very important because gives you the chance to “appear”. To show yourself to the world.

PEZ: So you’re in line with the modern sprinter stereotype.
ALESSANDRO: Everybody must be himself. I don’t like to be located in a stereotype.

PEZ: Imagine a movie about you, which actor can personalize Petacchi as best in your opinion?
ALESSANDRO: A movie about me? It’s quite difficult to imagine. I should think longer to this answer.

PEZ: Ok, but may we write that a character you can play is for sure Dr. Doolittle?
ALESSANDRO: Ohh yes, you’ve seen my love of the pets.

PEZ: And who takes care about them when you’re outside for the races?
ALESSANDRO: My wife does it for me. 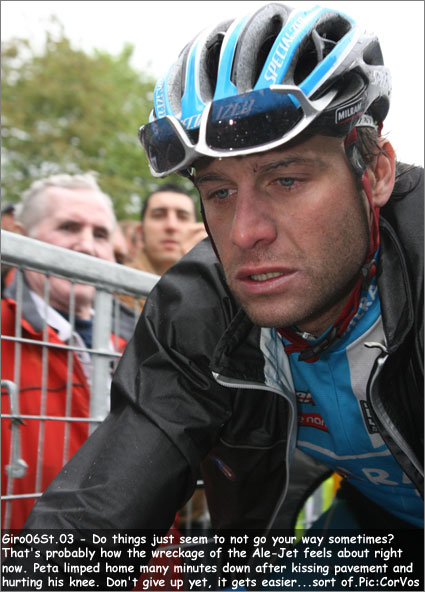 PEZ: Coming back to the races, which one can open to you again the doors of the celebrity? The World’s, the Sanremo?
ALESSANDRO: I think the World’s, but Sanremo is the race I have inside since I was a child. It’ss the race of my land. I won it but I would like to win it again.

PEZ: The Sanremo is very long. Is there a special part of the route which you love particularly?
ALESSANDRO: It would be very easy to answer the Poggio. For sure the kilometres which divide the descent of the Cipressa to the beginning of the Poggio climb.

PEZ: It’s a race that usually rewards the sprinters but it’s also open to the surprises. Last year…
ALESSANDRO: Last year I lost it. I’m still thinking about that race because I lost it in a few meters.

PEZ: Even worse than Madrid 2005?
ALESSANDRO: Worse. But also Madrid burns inside me.

PEZ: Inside your team there is a certain Zabel, so called Herr Sanremo. He won four times your favourite race.
ALESSANDRO: We demonstrate last year that we can ride together without any problem. We both demonstrated to know how to work for the other.

PEZ: Do you worry any problem to establish whom will be the leader for that race?
ALESSANDRO: I always esteemed and feared him we he was an adversary. Also if I won many sprints against his wheel. He is that kind that is everywhere, he is always present. Like in the 2003 when he won the Paris–Tours against me. In any case the stronger between us will be the recognized leader of our team.

PEZ: So, who are the sprinters you can fear about?
ALESSANDRO: Three names over all: Mc Ewen, Hushovd and Boonen

PEZ: And who are the three best of any time in your opinion?
ALESSANDRO: Me, Cipollini and someone else from the past. I would like to say Van Steenbergen because someone compared my style to his one.

PEZ: Do you ever think about riding the track?
ALESSANDRO: There could be a chance before closing my career. It would be a good opportunity try to win the Team pursuit World title with my team mates Ongarato, Sacchi and Velo.

PEZ: Are you technically involved with the settings of your bike? Which are your special requirements?
ALESSANDRO: Of course, especially for a sprinter the bike must be reliable but the most important characteristic for me is the rigidity of the bike. It’s so important avoid any loss of power during the thrust action…

PEZ: Last year during the second stage of the Giro you crashed but you were able to finish the stage with a broken knee.
ALESSANDRO: This fact maybe gave to me more popularity than even a victory.

PEZ: Maybe that was the reason that you had the power to finish the stage?
ALESSANDRO: No, it can be not just the popularity. It’s something deeper. It’s the love for my work, the respect for my team. It’s the wish to win that really gives you the booster power in certain situations. 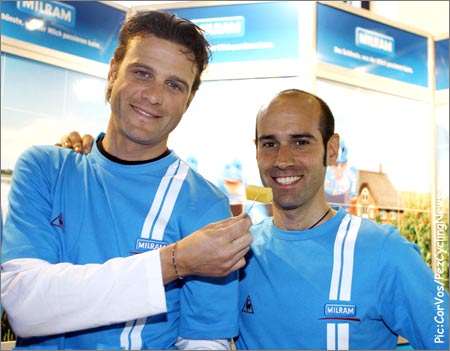 Eat Some Cheese! Ale-Jet mugs with Igor Astarloa at the 2007 team camp.

PEZ: Where is cycling going now?
ALESSANDRO: Cycling is European and the great races. But we must be open to a new era. It’s also important to globalize our sport. I would like to ride also outside of the Europe. Everything changes.

PEZ: Ok but which is the right way to do it? Actually there’s a big fight between UCI, organizers and Pro Tour teams. It looks like more a problem of money, very far from the needs of the people who love this sport.
ALESSANDRO: The Pro Tour is trying to change the things but through much difficulties.

PEZ: Is it not the time for the riders to be part of the discussion?
ALESSANDRO: I know we are doing something in this way. I think we should move through our Teams. At the end I think that we will be decisive together with our teams.

PEZ: Thanks Alessandro for your time, but before you leave I have to satisfy our last curiosity about the Sanremo, your favourite race.
ALESSANDRO: Which one?

PEZ: If it would be a woman, do you imagine her blond or brunette?
ALESSANDRO: Brunette, as my wife is.

That’s what we mean a different angle…

• Get more info at: Team-Milram.com