‘Campionissimo’ – the name given to only a very few cyclists in Italian history – the elite who rose above ‘normal’ champions – the best of the best. Fausto Coppi is perhaps the best known campionissimo, and his legend is as much a part of his country’s cycling sport as the bicycle itself. PEZ’s Alessandro Federico talked recently with Angelo Coppi – the son of Fausto.

“Good evening Mr. Coppi” I honestly feel strange while I start to speak. Mr. Coppi in this case is the son, of legendary Fausto Coppi. Fifty-two years old just the day before … “Congratulations”, he’s a geometrician and very busy in his work around the new buildings. He lives where his family has lived for generations in that remote land of “champions” in the north–west of Italy.

Girardengo and Coppi, both from Novi Ligure, they are commonly known as “Campionissimi”. Girardengo before the war and Coppi just after, have been the symbol of this sport for more then 20 years. The best of the best. 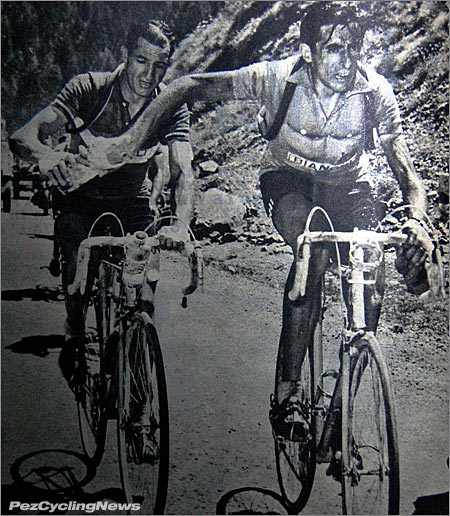 Coppi’s battles with Gino Bartali were the stuff of legend.

Mr. Angelo Fausto Coppi lives where his father first started pedalling. Every day he covers the paths where his father trained and suffered for his future and the future of his son. He is not really a cycling fan: “I’m not an amateur but I ride sometimes, just for myself” but cycling penetrates his life during the long days of May. “The Giro is something special for our family, we’re invited every year to the Giro presentation in December and we’re invited to the Giro as well”.

Especially this year when the Giro will touch the Coppi’s land during the stage 11 (Serravalle Scrivia – Pinerolo). “The departure is located at few minutes from my house and I will be there; than the day after I will follow the stage that will lead the Giro to Briancon because there will be the Colle dell’Agnello that is the 2007 Cima Coppi”.
[Read about the Cima Coppi here.]

Mr. Coppi loves to follow each meter of the route which covers the mountain dedicated to his father’s memory; “I don’t like to look the stage from the finish, but I love to travel all over the route by the car, especially on the top of the Cima Coppi; I love to see the Tifosi over there, waiting for the race”.

All the Italian Tifosi, but not just them, are sensitive to the Coppi memory “I always feel pride when someone starts to tell me some of his experience in the memory of my father; especially the young, who were born after he left us”.

Coppi in Italy is a very heavy surname. I guess how many times the people remain shocked in front of him and how many questions they can make to him. “Someone doesn’t care, someone else start to tell me that time when he went to the top of the Pordoi and the grandfather told him the Coppi wrote there an important page of the cycling story. The question that the people ask me most often is why I didn’t ride as my father did. Why I didn’t try to be a cyclist.” 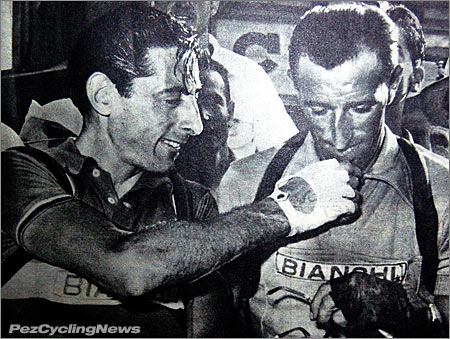 Those are the Italians who are still looking for another Coppi, since that time when Fausto, senior, was able to open the wings and to leave the others on the pedals. So, why not the son?

“I think that cycling is considered in Italy one of the most important sports, but the people need a great leader, a champion. Nowadays the scandals that affect this sport refrain this love and I think the major case it has been the Pantani one. Sometimes the “timing” of the scandals are much more important that the fact itself. Pantani was going to win a great Giro and what remains today about that? Just a big confusion.”

Yes, Mr. Coppi, a big confusion. And I like to rove and hide through the remote white roads that your father covered once upon a time. I’m not the only one, if it’s true that many people like to visit the Coppi’s memorial in Castellania, where the Heron was born. That very small country village just a few hundreds meter above the plain so far from modern life.

The Italians are son’s of their story and Coppi is part of it. The story is an heavy bag that every Italian collects daily and after some years is never able to leave. That’s why the name of Coppi still sounds thorugh the Alpine valleys and that’s why the Cima Coppi is not just a top.

The Italians never accepted the fact that Coppi left. Every year, on the 2nd of January the broadcast opens with the memory of the Great Champion that left because of undiagnosed malaria.

But for someone the story will be so closed that it will be extremely difficult to be read as it. Because the story is done by men. And men means feelings and, between these, love. Love for life, for the family and for what is more important in your life; sons. “I have few memories about my father. But in each one he was just a father. I was five years old when he left and I don’t remember the rider. Just the father.”