He’s been called the “international voice of cycling” by one of the sports top pros, and has become a key part of the daily spectacle of the sport. I talked to Anthony McCrossan about life as the Giro’s first English-speaking roadside commentator.

I’ve known Anthony for several years now, going back to his ground floor involvement with Cycling.tv, where one of his jobs was calling races on the then startup cycling channel. In 2012 he was hired by the RCS as the first English-speaking commentator to host festivities at the start and finish towns – where he worked the stage at rider sign-on, and then the finish lines broadcasting to anyone within earshot of the finish line everything going on that day. 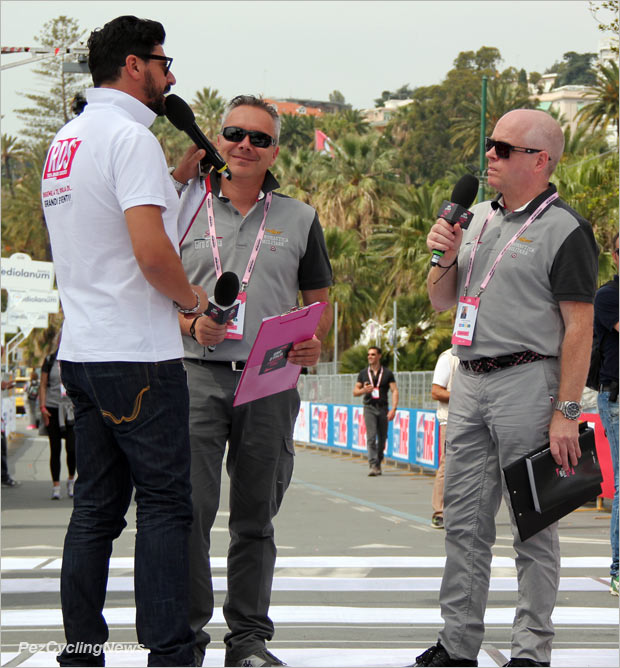 Italian is by far the first language here, and outside of bigger cities it’s still hard to find people who speak English, but the sport’s worldwide audience, and the RCS’s determination to grow the Giro beyond Italy prompted them to reach out to the world’s English speaking fans.

Anthony has one of the more interesting jobs in the race, so we sat down ahead of the stage 1 TTT in Sanremo to find out more.

Pez: Tell me exactly what is your job here on the Giro?

Anthony: The Italians would describe me as a ‘speaker – so I’m the English speaker of the Giro d’Italia. My role has evolved – this is the fourth year I’ve done it.

You took a photo of me after my first Giro in Milan – and I remember that moment, I was kind of standing there taking on the fact that I’d done the Giro and was the English speaker…

I only do about 10 stages, the whole reason behind this is that the Giro want more international fans, but they recognize there are areas of Italy where there are no English speakers, so they pinpoint the key stages and I come back and forth from the UK and go to the main stages. So I have to study the race and keep in touch with the team here while I’m away.

I get here before the start of the race, we did the Teams Presentation last night, and now at most stages I’m at the finish line. My role is to bring the race to the fans, outline to them what the race is about, what the stage and sponsors are about, the main riders…

It’s broadcast purely live and we walk up and down the finish line talking to fans before the race arrives. So we build up the race and then we go into that commentary box that everyone sees on the finish line, and we then commentate the last 40km of the race. 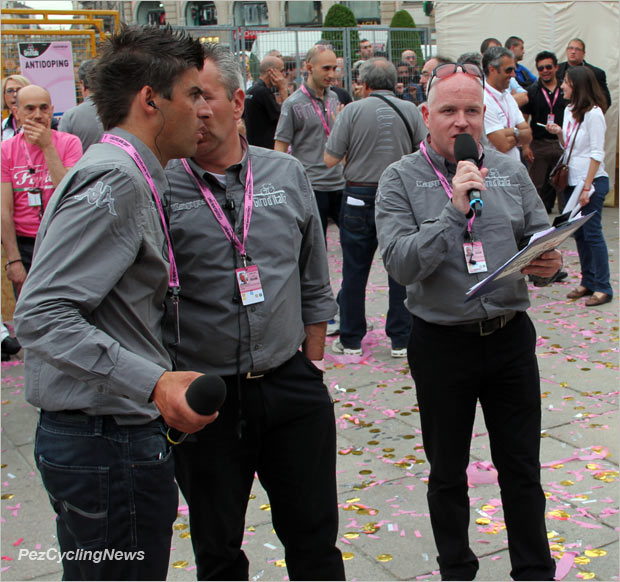 Anthony realizing what he’d accomplished at the end of the 2012 Giro in Milano.

Pez: So RCS wanted an English speaking host as part of their strategy to make the race more accessible to and English audience…

Anthony: You’ve got the Tour, and it’s massive, and people are going to go anyway, but races like the Giro who want to grow, have to think of unique ways to make their race different. So they knew that a lot of Americans, Brits, and other English speakers love the Giro because it’s different, it’s passionate, it’s got a different feel about it, and you love it… but they realized people on the finish line had no idea what was going on.

Pez: This is the 98th edition of the Giro, and you’re the first English speaking host they chose – what’s that experience been like for you?

Anthony: I spoke absolutely zero Italian when I started… so I think back to that first day in the car and I just had no idea what was going on… and they spoke to me in broken English, but over four years their English has got a lot better and my understanding of Italian is much much better – I understand everything that Paolo and Stefano commentate [the Italian speakers at the stage starts and finishes].

That first year was a blur really, but now I’m part of the team, and they love cycling and how this race looks to the fans. That’s the difference, they really think about how to make the fans experience better. For example, our finish line producer walks the finish line and he thinks about whether the fans are reacting to the race or not, and if they’re not, he changes what we do.

Pez: This isn’t your first commentary gig, I’ve listened to you for years calling races on tv back home – what other races are you working on?

Anthony: My time is split now between a lot of television and a lot of speaking. This sounds like a name dropper, but it’s not – it just struck me though… I was in Tokyo for the Saitamo Criterium with the ASO, and I went to a reception with Trek, and Fabian Cancellara introduced me to someone as “the international voice of cycling”. I said “hang on a minute Fabian”, and he said: “no, but you are – most of the big races we now ride you are the speaker.”

My years starts with Dubai, I did Qatar this year (live from the races), I do Milano-Sanremo, Strada Bianche, the Giro, I’ll do Abu Dabi, I did the Worlds last year, I did the Tour de France last year… so I guess Fabian’s statement is correct. But in a weird way, you don’t realize what you’ve become. 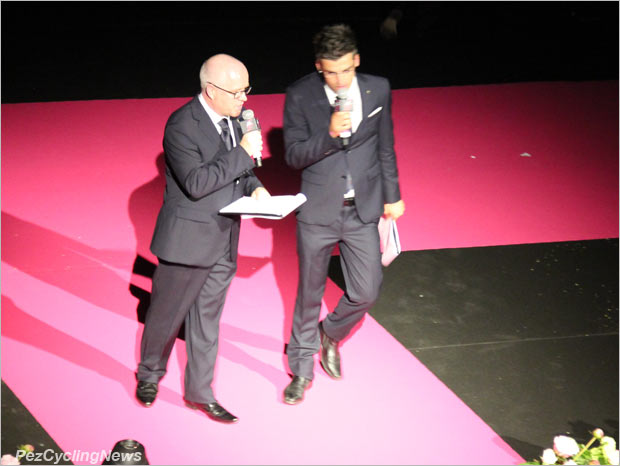 Pez: One of the challenges with your job is that the riders tend to give such ‘nothing’ answers to questions, they essentially can’t or won’t give you an answer that’s of any interest to the audience. Your job is to pull something good out of them – how do you get them to say something interesting?

Anthony: I don’t know if it’s even possible now because they’re all media trained, and the sponsors or team have told them what to say. But last night Richie Porte showed a bit of his personality on the stage because I asked him the question you have to ask – what do they think of the race and what are they going to do… But then I asked about his preparation and he said “well I stayed off the beer”. Over time you get to know the riders and they trust you.

As the Giro’s popularity has grown with English speaking fans, I get many more messages, talk to many more people by the roadside saying hello. The Giro is modernizing it’s brand and I think we’ve seen it change a lot in recent years. 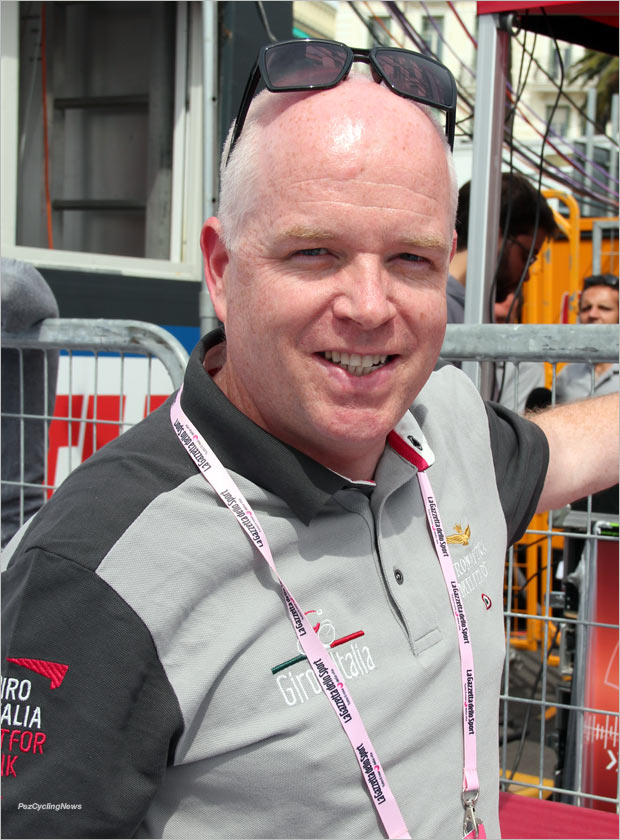 Pez: With the sport still embroiled in doing scandals, and even the RCS has egg on their face after reportedly refusing to allow David Rebellin to ride, even though his past is no worse than many of the riders here – how do you see fans reacting to the current turmoil? Do they still care about the sport of cycling?

Anthony: I think the people standing at the side of the road just love the spectacle. I think back to the Zoncolan last year and the crowd was massive. This sport is still years away from being not associated with doping, and we can’t get away from that. People come out and watch cycling because it’s colourful and exciting and they want to be part of it. People in Italy do care about this race.

People go to the Tour because it’s the Tour. People go to the Giro because they’re passionate about cycling, it’s different and they want to be part of that. As a commentator, to be honest, I don’t want to be commentating on Davide Rebellin at 40-odd years of age racing, I’d rather watch the up and coming young riders who are in a different era race their bikes.

When we get to the end of this, I want you to tell me if you noticed a difference in the fans at the side of the road.

Pez: Alright I’ll do it. Thanks for talking with us and buon Giro.

Keep up with Anthony on his at Twitter.com/antmccrossan and Cyclevox.com

Ride with the legend Miguel Indurain in the Dolomites