When you make pro cycling your work, sometimes the last thing you want after a tough day following races, the latest tech, and chasing riders for interviews, is to settle in with a novel about – pro cycling. But author Dave Sheids has published two books based on fictional characters at the Tour de France that even the most disgruntled cycling hack can enjoy.

As editor of this website, I get all kinds of stories and books sent in for review. As you’d expect, these cover the quality gamut from ‘riveting’ to… ‘kitty box liner’. The thing about becoming a writer is that there’s really no barrier to entry – (just look at me!) and there’s often a huge difference between a writer’s perception of his work, and the audience’s perception of his work – if you get my drift. The true tests of a writer’s worthiness are his commercial success – (is it paying the bills?), critical acclaim (what are the chat boards sayin?) and his longevity (can he do it again?).

So it was with some skepticism that I cracked open Dave’s first cycling novel ‘The Race’ last summer. It’s a story about a young American cyclist who defies the odds and goes on to ride with success at the Tour de France. Not really an original storyline, but the first time I’d seen it applied to cycling. I read through the story quickly and found myself oddly satisfied by the end. It was a good read. 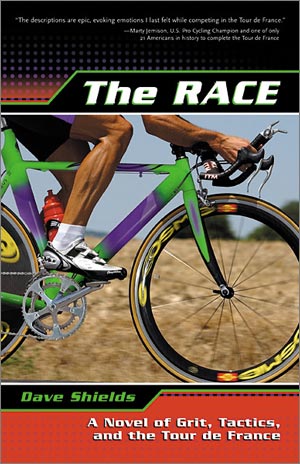 So when Dave’s second cycling novel ‘The Tour’ arrived, I was actually keen to crack it open, and pleased to find it picked up the story of Ben Barnes where we’d left off in ‘The Race’. ‘The Tour’ takes us through the end of Ben’s Tour de France and examines the spectre of doping as it affects the various characters in the book. I liked this book too, and stayed up past my bedtime more then a few nights to find out what happens next.

What sets these books apart from so many others about cycling, is that Dave Shields knows how to tell a story. He also knows how to describe the racing, which I think will appeal to anyone who’s raced themselves, and he presents the climbs, villages, and characters of le Tour in a way that should ring true for anyone who’s seen the race first hand.

Both books have been written with two audiences mind – the experienced cyclist, and the neophyte race fan. The story shifts into granny gear at times as Dave explains certain aspects of cycling that long time fans take for granted, but he does a decent job of not dwelling on ‘bike racing 101’ and moving things along in the big ring.

Rather than dwell on my own ‘review’ of the books, suffice to say they’re worth checking out. Instead, I thought it’d be more fun to call Dave and find out more about how he actually crafted the stories together… 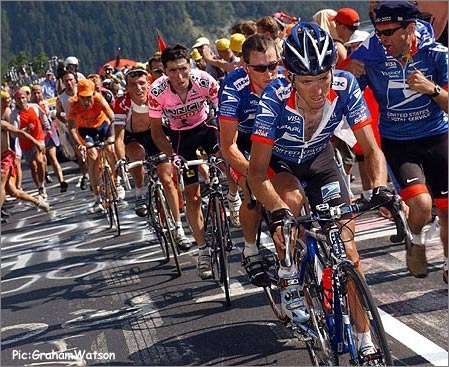 Dave’s research into the pro race scene include getting as close to the action as possible… like running alongside Lance on Alpe d’Huez in 2003.

Dave: My first novel was called The Pendulum’s Path. It got great reviews but sales never really took off. I decided that I needed to write some sort of a blockbuster book that nobody could resist. Unfortunately, I couldn’t get the idea of writing this little cycling story I’d dreamed up out of my mind. Finally I decided that I’d better just write that book so that I could think straight and get on to something else. Eventually the book gathered all sorts of honors including becoming the first sports oriented novel ever to with the Benjamin Franklin Award for Best New Voice in Fiction. It’s been an Independent Publishers Group bestseller ever since it came out and was Amazon’s number one selling sports novel this past July, beating out John Grisham’s Bleachers.

PEZ: The books present a pretty accurate portrayal of the sport from the inside out… How did you capture this aspect of cycling without being a pro yourself?

Dave: I’ve been a big fan of the sport for years, going to great lengths (as have all American cycling fans) to follow the sport in Europe since back in the LeMond years. I’ve also had experience racing bicycles and especially competing in triathlons where I’ve been fortunate enough to win a few times. The experience of leading and winning races was invaluable in writing the book. But an almost random event turned into a really big breakthrough. Years ago, when I worked in the marketing department for the Park City Ski Area I hired a woman who eventually started dating this guy named Marty Jemison. The next thing I knew she was following him to Europe to help him pursue a pro cycling career. We stayed in touch… barely… and I got to vicariously experience some of his accomplishments like twice finishing the Tour de France and winning the 1999 US Pro Cycling Championships. After he retired I asked him if he’d be willing to read my manuscript. He said, “No.” I begged, and he changed his mind. Amazingly, once I got the manuscript into his hands he read it in less than a day. He’d gone from being disinterested in the project to excited. He believed that my book had the potential to communicate the world of professional cycling to a much wider audience. With his help, that has become a reality.

Takin’ it to the streets: Dave is a familiar fixture at races and trade shows.

PEZ: Portraying pro cycling to knowledgeable fans can be a slippery slope unless you really know what you’re talking about. You’re obviously a fan yourself – how did you got into cycling and why does it appeal to you.

Dave: When I was 14 my dad and a crazy Scoutmaster came up with the idea of having us ride 300 miles from Salt Lake City to a resort in southern Utah called Lake Powell. Only two of the cyclists made it the entire way. Later I rode that same route again, and also lots of other long distance rides. I started participating in more and more races, went crazy for the movie Breaking Away, and devoured anything and everything I could find about Greg Lemond and his career. Soon I was reading everything I could about cycling and triathlons. Eventually I got to visit the Tour de France. Even with all that buildup, it still exceeded my highest expectations. Writing about it was a lot of fun.

PEZ: Are the characters based on real-life people? Who / what places or events in your life were models for characters and events in the book?

Dave: In the early drafts of my books bits and pieces of characters are often based on real life people, but those things often morph significantly in later drafts. My method of writing involves lots of rewriting and redrafting, so my final book bears only a passing resemblance to the one I started out with. Still, I think any author who writes passionately puts some of their own character into their books. There are experiences from my own life sprinkled throughout my books, but they are always changed and scattered. It’s surprising to find myself writing about a crash that was completely unpleasant at the time, but which I now look back upon as fortunate research material.

Sometimes the art of book promotion gets seriously grass roots… like handing out copies yourself.

In ‘The Tour’, you tackle the spectre of doping… Why this as a central theme?

Dave: When I completed The Race I never even had a thought of writing a sequel, but scores of readers asked me what happened next to my central characters. At first I thought I’d never find out, not because I wasn’t interested but because I had no idea what would drive the story. Those who’ve read The Race know that it’s not so much driven by the outcome of the cycling stages as by the main character’s internal struggle to extend his boundaries. It didn’t make much sense to write another book where he re-accomplishes the same thing, but then I started exploring ideas relating to doping, and when my research revealed information that shattered many of my preconceptions about the issues, I knew that I had my arms around a book that I really wanted to write. Writing a fictional story enabled me to force the reader to face some difficult decisions in the same ways that a pro athlete might, and the early reviews are telling me that it’s a storytelling strategy that worked. The Tour was a fun book to write, and I have very high expectations for its success.

There you have it – The Race and The Tour by Dave Shields – get yourself a copy at ThreeStoryPress.com