By the mid-70’s Belgian, Eddy Merckx was well established as the “Cannibal”, an insatiable creature for whom only victory satisfied the hunger. In 1975 a handsome, smiling Frenchman ended Merckx’s reign of fear in one of the all-time great Tours.

Bernard Thevenet is older now, but still handsome and affable, he took time-out from his role as “chef de piste” at the Grenoble six-day race to talk to PEZ. The interview was conducted in his office, he brought his chair round the desk so there were no barriers between us; I couldn’t help but notice that he had his shoes off…

PEZ: Did you have a successful amateur career, Bernard?

PEZ: You were fourth in Le Tour in 1971, did you think then that you could win one day?

Bernard: I actually won a Tour stage in 1970 and another in ’71. I didn’t think about winning, it’s a very long road from thinking and hoping about victory to actually winning. 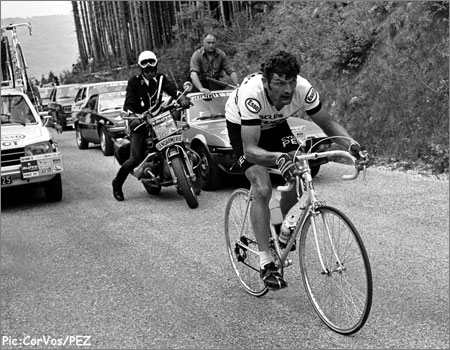 Thevenet giving it a go solo.

Bernard: I was third in the Vuelta and won the French championships. I was second in the Tour but still didn’t think I could win, rather I hoped that I might, someday. There were two very strong riders in the way, Merckx and Ocana who won that Tour in ’73.

PEZ: What happened in ’74, your Tour progress derailed, didn’t it?

Bernard: I started the year well and won the Criterium International but I was ill at the Tour. I finished the season strongly though with a good ride in the World Championships and I won the Tour of Catalonia in September.

Bernard: I arrived at the Tour in good condition. I had won the Dauphine, it’s like a small Tour de France; It has the same mountains, some flat stages and time trials, it’s very important to your preparation for the Tour. I had a new sport director, Maurice de Muer and he said to me that if I arrived at the Pyrenees within three minutes of Merckx, then I could win. I thought it was possible but wasn’t sure.

The strategy was simple – attack Merckx in the mountains. When we arrived in the Pyrenees the gap to Merckx was 2-20.

On stage 11 to Saint Lary-Soulan I was second to Zoetemelk (1980 Tour winner, Joop of Holland) but ahead of Merckx, I reduced the lead he held on me to 1-31.

On stage 14 to Puy-de-Dome I was second again, this time to Van Impe (1976 Tour winner, Lucien of Belgium) and took more time on Merckx, reducing the gap to 58 seconds. On stage 15 to Pra-Loup I punctured at a bad time and it looked for a moment that I had lost the Tour. But I came back and with six kilometres to go I attacked. 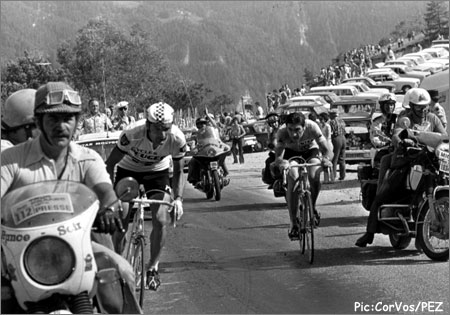 Thevenet sticking it to Merckx.

I caught Gimondi (Italy), who was alone in the lead, dropped him and took the stage. I also took the yellow jersey by 58 seconds but against a man like Merckx that was nothing, not nearly enough.

The next day is a special day in France, Bastille day; there was just one thought in my mind – attack! On the climb to the finish at Serre-Chevalier I went, I won the stage and increased my overall lead to 3-20. This made me less nervous and more confident.

I was afraid of Merckx though, I watched him constantly, he was such a strong personality, he did not allow you to relax for one moment. I was always alert, always thinking, ‘what will he do next?’

The last stage was the first time that the finish was on the Champs Elysees in Paris, even then he attacked me, but it was magical to win in Paris.

(It should be noted that Merckx crashed on stage 17, finishing second in Paris with a broken cheek bone despite having been advised by the race doctor to abandon)

Thevenet: I still don’t understand ’76; I won the Dauphine and was in really good shape for the start of the Tour. In fact, I was third in the prologue, a type of race at which I am not a specialist. I was filled with confidence and thinking – ah! I can win again. Unfortuanately, I crashed in Normandy and after that I just was not myself: eventually I had to abandon. 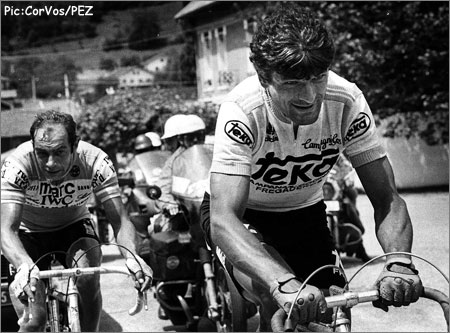 Thevenet was consistently a rider to be reckoned with at the head of affairs.

Bernard: I was in good form coming in to the Tour. I had already finished second in the Dauphine and Midi Libere, beaten by very narrow margins in both races. I was lucky in a way in that Tour because when the Raleigh rider Didi Thurau (Germany) took the yellow jersey, Peter Post their Dutch team manager decided to defend it. I think Thurau held the jersey for two weeks or so but it meant that the team was burned-out when it came to helping Hennie Kuiper (Holland) in the finale; he was their designated team leader before the Tour. If Kuiper’s team had not worked so hard for Thurau perhaps he could have won instead of being second behind me. Post was a very good manager but that time I think he made a mistake.

PEZ: Your palmares is strongest in stage racing.

Bernard: In the era I grew-up in France the Tour was everything, since I was a child I wanted to ride the Tour. Also at that time your programme as an amateur contained many stage races, so I was used to that type of race; as espoirs we all dreamed of competing in the Tour. In addition I was never a good sprinter but I was strong in the mountains and against the watch, these are qualities which are very useful for a stage race rider. 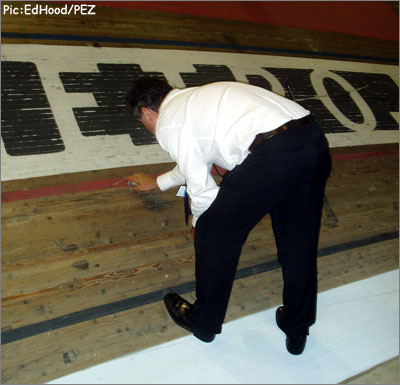 PEZ: You won the Grenoble Six-Day twice, did you ever consider a careeer on the winter boards?

Bernard: The indoor tracks are comfortable, there is no rain, no wind. But it is difficult to do the training you need to do for the road and ride the six-days. It is also hard to maintain your form in the summer and the winter. 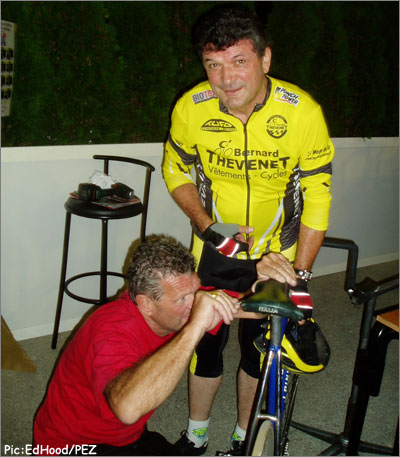 Thevenet getting ready for some bike action in Grenoble.

PEZ: You had a spell in team management after you retired as a rider.

Bernard: Yes, but I think it was something that I did not particularly enjoy. I work in public relations now with ASO, the organisation behind the Tour and I enjoy it very much.

Bernard: It would have been nice to make more money! But I have no regrets about my career, I do not live in the past.

PEZ: What was the worst moment of your career?

Bernard: Abandoning the Tour in 1976, it was very bad, it took me a long time to get over it. 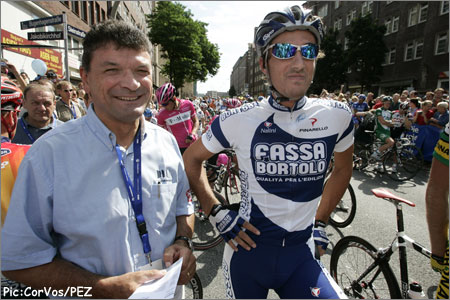 Thevenet is still active in many different roles throughout cycling.

PEZ: And the best moment?

Bernard: There are two, in 1975 during the Tour I was alone in the lead on the Izoard. It was Bastille day and huge numbers of people were there, all shouting for me. It made me feel so motivated and emotional because I was giving so many of my countrymen reason to feel proud to be French on such a special day. Also on l’Alpe d’Huez in 1977 there were so many people there to encourage me, it was another very wonderful moment.

PEZ would like to thank a very special champion for his time and courtesy.

The Ideal Day in Italy