Sure, Interbike 2007 had beautiful showgirls, cool products, wild parties, and big name cyclists. But I went to Vegas to drink a Fat Tire Amber Ale with Bob Roll. VeloPress has just published “Paris Roubaix: A Journey Through Hell”, and as Bob was a 7-time Paris Roubaix rider, it seemed reasonable that he write the forward to the book. I spoke with Bob about Paris Roubaix, Lance Armstrong, the legacy of the 7-11 team and the scars.

PEZ: Bob, I think this is a pretty interesting quote by you: “Now crashing, on the other hand, gives you scare tissue, and scar tissue tells a story no idiotic tribal barbwire tattoos ever will. And as the stories of your scars are retold, you’ll get hungry for sour mash and pork rinds.”

Can you show me one of your scars and tell me the story about how you got it? 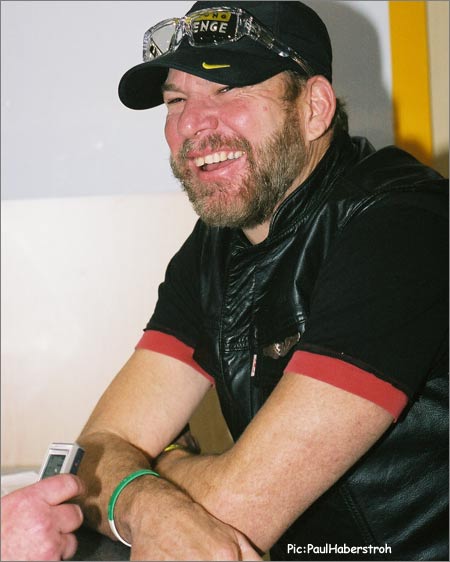 BOB: Each year it seemed like people were more and more outrageous looking. And I thought, you know there is nothing better than actual involuntary scar tissue that life throws at you …not an ink fling. I wasn’t really serious about that, but it was just a way to tell people that the scars you get racing bikes… there are stories in them.

Here is a good one. [Bob shows me the inside of his left forearm] You can see the vein here. Something put a hole in this vein from a crash during a race and blood was just shooting out. I just picked up some debris. If something goes through the vein it is able to coagulate and the vein can retract and close itself off, but if it is just a hole, it can’t draw itself up around the hole. So blood was shooting out and I almost died.

I got back to the start finish line and they took me by ambulance to a helicopter to the hospital. The doctors were really good. They pulled the veins out and they looked like spaghetti noodles and stitched them up. And I was sitting there watching it and I thought, wow, you guys are experts. The guy was really really good and it was pure luck. And I thought about America. If that had happened nearly anywhere else, there might have not been a vascular expert.

You know I was really home sick when I was in Europe for a lot of reasons, and when I came back it happened during one of my first races back in the States after a long time in Europe. I was thankful that it happened here. Even though there is a lot of hyperbolie and complaining, that is good because that means we have the freedom to do that. So America is beautiful. 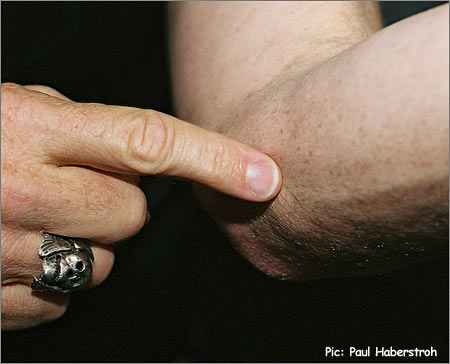 PEZ: Peter Gilbert from Cane Creek said that I should ask you about working at the restaurant “Perko’s” which was near the California Peddler bike shop in Danville, California. He said there were long days in cashmere sweaters. (They were wool after all.)

BOB: Yeah, they were my Grandma’s sweaters that my Mom wore growing up. And my Mom’s parents did not mess around with inferior clothing. They were not well off, but they got one sweater and that was a three-generation sweater. I tried everything. There was not a lot of technical clothing and I swear to God that was the best long sleeve jersey ever, to this day. It was light, it had perfect insulation, stayed warm when it go wet. My Grandma got me through three winters of rain in Northern California. You know the guys would all be decked out, Pete Gilbert especially, like with the coolest stuff and there is Bobke in his Mom’s sweater, and (laughing) I would KICK THERE ASS every day. It just took one guy to say you’re in your Mom’s sweater to dole out the punishment!

TIME WITH LANCE
PEZ: I have read that you trained exclusively with Lance Armstrong shortly after he recovered from Cancer. You guys went to North Carolina. The weather was rainy but the goal was to just ride your bikes. Tell me about that time…

BOB: Chris Carmichael had designed Lance’s training. Chris had a plan. I wasn’t privy to it. I presume he talked to Lance about it. It gave Lance and I a chance to talk about what we wanted to do, what cycling meant and about some of the psychic wounds from racing in Europe. Team mates, some better, some not so good.

I think that Lance, when he got sick thought about returning to racing, and that helped him a lot. I think in the back of his mind, it got him through a lot of really dark times. Like touch and go. Live or die. And a little bit of morale goes a long way when you are in that circumstance. He had not really thought about what his career would look like after he came back, so the struggles to race were really really intense in early ’98. And during Paris-Nice he was having a really hard time. It gave Lance a chance to focus on what he would like to do. What his legacy was going to be.

I had a certain way of talking about things and looking at European racing that might have been a little different from his. We were the first people to go over there and we went through a lot of very intense situations. It was a difficult period with the European peloton. The next generation sort of took it for granted that they were provided a slot in the line up. He did not really know how intense and vicious we raced. Not one micron was ever given.

It was good for him to remember how before you were world champion what the struggle is. It was just reminding him of the struggles he went through. It was really gnarley. It seemed that Lance was just getting fit, going through the motions…training, but actually he was taking a lot of things in. 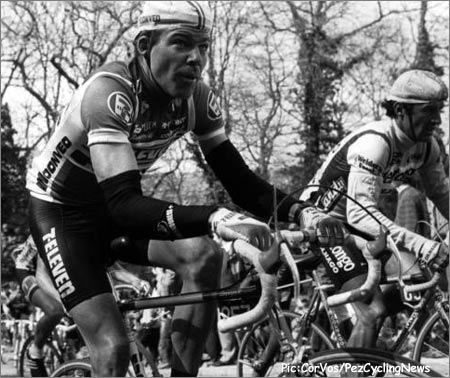 Bob was no stranger to the cobbles of the northern Classics.

And when you think about what he had just gone through and he was a young guy, 24-25 years old, and you can imagine how it resounded in his moral and psyche, and he has written about it a lot. It seemed like a really good training camp. It reminded me how we were, how we got together, how we raced as a team and what we meant to each other. You didn’t have to lean on your teammates like we had to. Because today everyone has an apartment, a Soigneur, everyone has a bus, everyone has a driver, the road is paved. And we looked out at a raw field. I wouldn’t say proud, I’d say I was lucky to be a part of American cycling lore.

A JOURNEY THROUGH HELL
PEZ: Bob, you wrote the forward to the new VeloPress book: Paris Roubaix A Journey Through Hell. In that forward you write “The race is so powerfully eternal”…

BOB: That race can remind anyone that is watching it of times long ago. Like blood and shadows time. A time when your parents didn’t know exactly what would happen next. For the sport to reconnect with its primeval European roots is really intense. 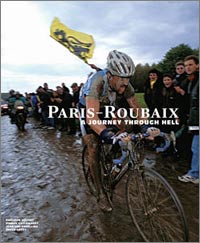 Paris Roubaix is unique, especially when the weather is bad. And there is just no hiding from the cobbles. No amount of modern technology will every make it more palatable or less of a pulverizing spectacle. And that is why that race is so important, beyond just the physical feat.

You look at the guys coming across the cobbles, and that is at 280 kilometers and they look totally demolished. [At this point in our conversation, we are both served flutes of Champagne from our hosts, VeloPress] Paris Roubaix, like Rome is the Eternal City, Paris Roubaix is the eternal bike race.

And it is more than just the athletic requirements. The race is awesome. You go in the velodrome and there are 200,000 Belgian’s going crazy. They are going Ape-Shit. They have been drinking all day. And the Belgians, they just come across the border. And you know that part of the world is so primordial, it has been the scene of some absolutely insane conflicts. But now that part of the world is very peaceful. But the bike race is still very intense.

Thank you very much to Renee Jardine – Editor and Associate Publisher,
Dave Trendler – Marketing and Publicity Manager and Jennifer Soulй – Wholesale Manager and all of the VeloPress staff for their hospitality during a very busy time of the show. Their book signing with Bob Roll was the class event of Interbike 2007.

“Paris Roubaix: A Journey Through Hell” is an instant classic that can be purchased for US $39.95 in bookstores, bike shops, and at VeloPress.com.”