It’s no cliche to say that he’s King of the Sixes – Bruno Risi of Switzerland. Risi is by far the most successful active Six Day racer in the game, and if it weren’t for Patrick Sercu’s incomparable tally of wins and wholesale domination, he might be up for greatest Six Day racer ever. As his soigneur rubbed the fastest legs on the boards, their owner gave us some of his precious time.

PEZ: First of all, Bruno, can we check your vital statistics? 152 starts, 45 wins, 37 of those with Kurt Beschart?
Bruno: Yes, that sounds correct.

PEZ: Who was your hero as a young rider?
Bruno: in Switzerland it was Urs Freuler and on the world stage it was Patrick Sercu. When I was a boy I went to see the Zurich six-day, Freuler and Sercu both rode and I knew that I wanted to be a six-day man like them.

PEZ: When did you ride your first pro six?
Bruno: My first big indoor pro track race was the Three days of Vienna in 1991 and my first six was at Ghent, the same year. 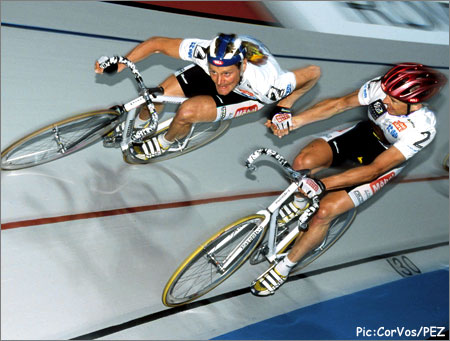 35 out of Risi’s total of 44 Six Day wins came with his best friend, Kurt Betschart.

PEZ: Who was your first partner?
Bruno: Kurt Betschart.

PEZ: What are the differences between the sixes when you started, and now.
Bruno: The programmes are shorter and more spectacular now. Back when I started, every six had a 100 kilometre or at least 100 minute madison. Chases are much shorter now (the longest chase at Hasselt is 60 minutes) and there are more spectacular events for the public like flying lap time trials.

PEZ: Is the scene healthier now, from the perspective of getting the public in?
Bruno: Six years ago the sixes went through a lean spell, when I started there were 13 sixes, but in the late 90’s that had dropped to seven Now it’s back up to 13, but you can only ride 12 because Dortmund and Grenoble are on at the same time. Overall I think that’s pretty healthy, at Munich as an example, the hall is full every one of the six days. 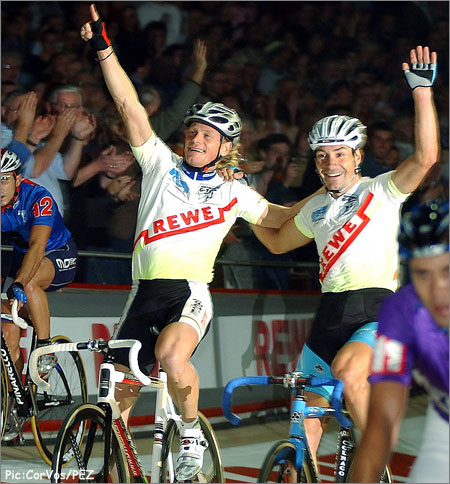 Bruno Risi has had a sterling 2006/2007 campaign, taking seven out of ten. Here’s one of the tally when he partnered with Erik Zabel earlier this Six Day season.

PEZ: You have come back from your injury very, very strongly.
Bruno: After my crash at Bremen, I had time to think. I sat down with my wife and we talked about my future. The first thing we decided was that I should go back into the national team and my big goal would be Beijing in 2008 for the madison with Franco. In this way I gave myself stimulation and motivation to get back to the top.

PEZ: Do you still ride the criteriums in the Summer?
Bruno: Yes, it’s a big part of my preparation, last summer I rode 40 days of outdoor track and road events 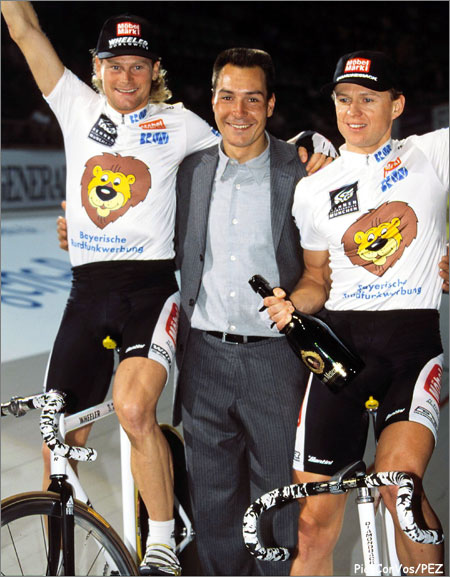 An interesting sight – Risi and Betschart celebrating a Six Day win in 1999 with Erik Zabel there to congratulate the two. It wouldn’t be too very long before Zabel really got the Six Day bug…

PEZ: Do you miss Kurt?
Bruno: Yes, of course. We went to school together and rode as a team for 15 years, sharing the same hotel rooms. it was like a marriage – good times and not so good times. When he stopped, most people were surprised but I wasn’t, for the last two years I could tell that his motivation was no longer as high as it should be. He has new interests now, in the media and with the Tour de Suisse. We’re still in touch and he’s still one of my best friends.

PEZ: You and Franco have really ‘clicked’ together.
Bruno: Yes, I see us as partners for as long as I continue to ride. I try to be his teacher – timing and reading situations are everything in the sixes and I am trying to pass my knowledge of this on to him. The fact that he is Swiss is good too because it means the organisers have a Swiss national team – national teams are best for organisers.

PEZ: What’s your favourite six?
Bruno: Zurich is my ‘home’ six so it’s very special but Munich is regarded as the world championship of sixes so it’s a great race to win. 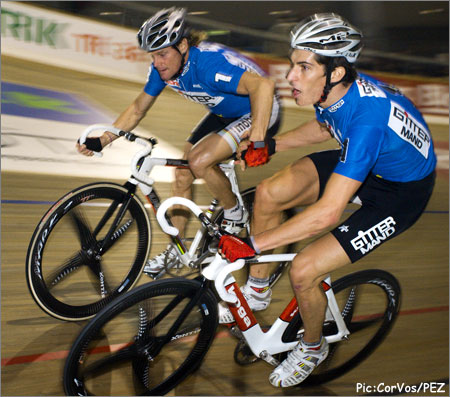 Risi has partnered extraordinarily well with Franco Macho Marvulli. The duo has their sights set on the Madison at the Olympics in Beijing in 2008. This writer won’t be betting against them.

PEZ: What’s the toughest six?
Bruno: Any one where Patrick Sercu sets the programme! Ghent is one of Patrick’s and it’s very hard, probably the toughest.

PEZ: You’ve had 45 wins, which ones were special?
Bruno: Our very first win was in Dortmund in ’92 and that was a great feeling but I still remember our first win in Zurich in ’93 – that was special.

PEZ: Any regrets?
Bruno: No! When I first turned pro I had two years with an Italian road team but I realised that was not where my future was and I decided to specialise on the track. Since then I’ve turned myself one of the best track riders in the world and I make good money – I’m very happy with how my career has gone.

PEZ: How many more seasons?
Bruno: For sure, next season and the one after Beijing, then maybe one more – so two maybe three more.

PEZ: Final question; I notice you eat a lot of cakes – what’s your favourite?

Bruno laughs and goes and gets me the box – it’s apple tart that fuels the fastest legs on the boards.

PEZ would like to thank Bruno for his time and Franco for setting the interview up. We wish them every success for Beijing.