This doCTor was “in the house” at the worlds – Christine Thorburn is both a world-class cyclist and full-time Stanford MD. After a disappointing 4th place at the Athens Olympics, she was on podium in the women’s TT at the world championships this year in Salzburg. We caught up with Dr. Thorburn at the NorCal Tour of Marin (www.tourofmarin.org).

PEZ: Third place in Salzburg…has the thrill of being on the podium worn off yet?

CT: You know, honestly, it hasn’t. I was really disappointed in Athens. You get fourth place, and everybody else on the US team in the time trial got a medal, so part of me wanted to achieve that before I retired. 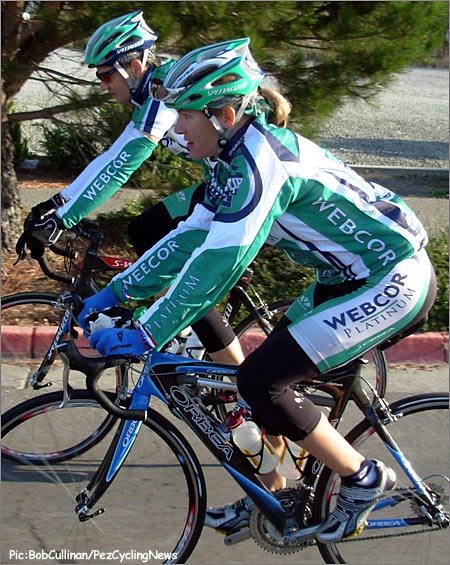 After peaking at the World’s and earning a Bronze medal, Christine Thorburn uses the off-season to catch up on real life.

CT: It was a special day because Kristin (Armstrong) won. To have two US flags raised was really emotional for me. You feel like we’re really accomplishing something good in the Worlds. She and I have really been developing in the sport together since 2002, and I knew she was riding really well this year, so when she won I really wasn’t that surprised. That made it even more special.

PEZ: You weren’t surprised at her, but were you surprised in yourself?

CT: You know, entering it I knew that the course was much better for me than prior world championships, so I thought realistically if I had a really good ride I could be on the podium. I’m obviously very happy that it worked out!

PEZ: Does this signal the official end of the season for you? Are in off-season training now?

CT: Yes, yes. The highlight of our season is the world championships.

PEZ: So, is it back to the simple life of just being a physician now?

CT: I was just complaining last week. I really hate the “off season” because it just means that I have to catch-up on all my other work.

PEZ: Give us an idea of how serious your training is during the off season. Do you just go out and spin easily? What’s your weekly workout schedule like?

CT: Ideally, you do other sports for about a month. Usually, that’s what most people will be doing, and then gradually get back onto the road bike after that. I like to take two months where I’m not following a regimented training program. The previous two years, when I had a little more flexibility with my work day, I tried to do other things like hiking and running. I used to run, but now I can’t jog 15 minutes and not be real sore the next day! This year, I decided that I love cycling, so I’m just going to go out and do things like this, the Tour of Marin.

PEZ: Any complete rest for you, any time when you’re not on the bike for days or weeks at a time? Or does that really not matter?

CT: I don’t think that matters so much. I am working a bit more this month, so I only have three days each week when I can get out on the bike. I think for most of us, it’s a mental break from just being so focused. 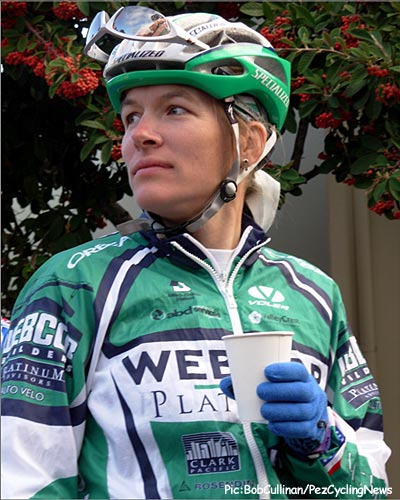 PEZ: Any goals for next year? Have you planned out what your season might be like, or is it too early to think about that?

CT: I’m going to be with the Webcor Platinum team again, and we’ll continue to have a little more of a stage race focused team, and I’ll probably race the same amount as I did this year, maybe a couple of different races. I’d like to try and do something with the national team this coming season. My thought is that I always try to take it one season at a time, but if I can continue to ride this well, then I may try to make the 2008 Olympic team. But I need to pay attention to what the USA Cycling announcement is about the criteria for making the team. I’ve heard rumors that you’ll have to be a member of the “long team” by the end of next year, so that will kind of diCTate how you choose your races.

For the record, Dr. Christine Thorburn will be nearly 39 years old by the time of the 2008 Beijing Olympics – and we expect kicking some serious butt.