Dirk Demol of The Discovery Channel Bicycle Racing Team has the greatest job in the world. He is the Assistant Director Sportif for the Spring Classics. Dirk won the 1988 edition of Paris Roubaix in the longest breakaway to date. He also won the Circuit of the Flemish Ardennes, and came in second to Stephen Roche in the 1980 Amateur Paris Roubaix. PEZ talks with Dirk about his Roubaix winning ride, preparation, and the desire to get out of the factory.

PEZ: Dirk, you succeeded in winning the greatest Spring Classic bicycle race; the 1988 edition of Paris Roubiax. How did the day unfold for you and the team?

Dirk Demol: That year I was riding with the ADR team. The week before, Eddy Planckaert, our leader, won the Tour of Flanders. So the morale of the team was very good for that week. Eddy Planckaert was the team leader for this race and I was one of two guys that was supposed to cover breaks. It was a fast, fast start. Luckily I made the right break at the beginning and there was a breakaway of thirteen riders. Immediately, we got five to six minutes on the peloton. When we started the first cobbles the time gap to the field was eight minutes. It was the earliest breakaway in the history of Roubiax.

We did exactly 222 kilometers up front. At 80 Kilometers we still had five riders. I was so sure that the peleton was going to come back because it happens every year.

It is always good to have someone in the breaks. My job was that when Eddy caught our breakaway, I would have some reserves and could help him. If he got a flat tire, I could help. 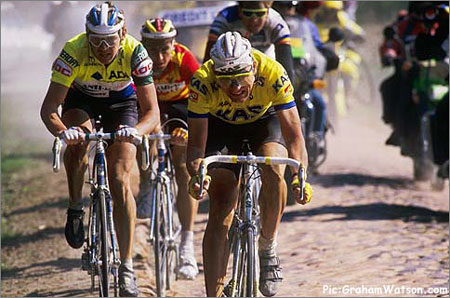 The break that went the distance – and with it Demol’s place in the history books. Picture courtesy GrahamWatson.com.

But the gap stayed at 3 to 4 minutes. What was hard was that I did not see my director the whole way. So, I was by myself, but the entire race I felt very good. Then with 30 kilometers to go, there was a car that passed us with jounalists, and Roger De Vlaeminck who was a teammate of mine my first year as a pro was in the car. And he said to me out of the car window. “It’s your chance today, maybe you can win because they aren’t coming back!”

So, at this time I was with two Swiss guys, Thomas Wegmuller who was just hammering and Stephan Joho who was a fast sprinter, and behind, Fignon was trying to bridge up. Thomas Wegmuller in his day, was super strong. Wegmuller was just hammering and hammering, and there was a split and I just had to go with him. At this point I was giving everything I had because I knew if I stayed with Wegmuller I knew I would lose the spint. I felt good, because I had held some in reserve for Eddy Planckaert.

I finally saw my director, with about 5 kilometers to go and he asked me “how is it”? That day I felt so good, in the final I was so sure that this was going to be my day. And in the final sprint, I had a feeling that I have not had since.

PEZ: You said in The Paceline about Paris Roubaix that “there are critical points in the race where everyone knows you have to be at the front in order to do well. There will be a fight for position and you cannot have any fear at all to work to get to the front and stay there.” What is that like to fight for positon and have no fear?

Demol: When you start the first cobble section it is soo important to be up front. The role of the domestiques is so important. All the favorites know you have to be up front. So, it is a big fight. No fear means, if a rider comes along side one or our riders pushes or elbows them they cannot use their brakes because the peloton will pass you. You start using your brakes in Paris Roubaix when you have fear. 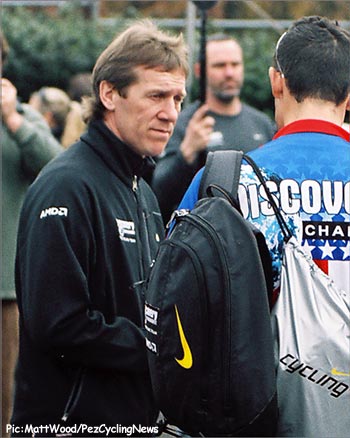 Dirk talks with his “Roubaix Protйgй” George Hincapie at the team camp in Solvang.

PEZ: There was a TDF recently where one of the stages went through some of the Robaix cobbles. The Discovery team was almost sprinting to keep Lance and the team in the lead for first cobbles sections.

Demol: Yes, the Discovery team was riding about 60 to 65 Kilometers an hour to get Lance up front. When we received the itinerary for that Tour de France I went and reviewed the cobble sections in April, because I knew it was going to be a very important stage for the team. I wanted to find markers like a big house or a church, and we could measure at that point it was exactly three kilometers to go before the cobbles. I went by myself twice to review the course. Lance came over once and we reviewed the last 80 kilometers of that stage.

The week that we stayed in Belgium for Liege-Bastogne-Liege, we got Rubiera and Azavedo and we went from Liege to see what the cobbles were like. I don’t say that you can win the TDF that day, but you can lose it. Like what happened to Mayo. Paris Roubaix is all about taking risks and position. 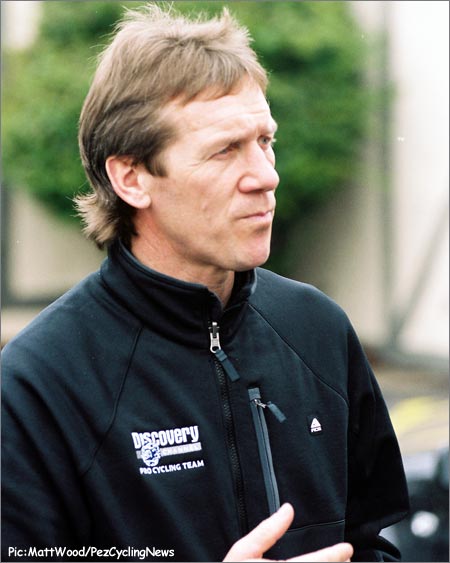 When I visited the stage in the Spring, I took a GPS device to measure exact distances between two locations. So, when the boys would see a church or a big tree, they knew that it was exactly 2.1 kilometers to the cobbles. They knew the course and what to expect. Preparation for this stage was key. One of Johan’s goals when he began with the team in 1999 was that he wanted the team to see the stages, he wanted them to know what was on the menu today.

PEZ: I have read that you said that the motivation of a team is very important. What do you do and say to a team to keep their motivation level high? Obviously you are working with professionals.

Demol: The plan that we have on our team is that you don’t put the pressure on every single race every day. We have periods were we prepare, like now I will start. With a lot of teams there is always pressure. If you don’t always put pressure on a team, they know when that when big races come like the Tour of Flanders and Roubaix, they are goals.

Also we have very strong leaders like George Hincapie, one of the best riders in the world. He does not have so many wins, but he is always there. He is always top ten. And we always have one or two strong guys to protect him from the start and will stay with him as long as possible. If they do their job and get dropped, I’ll say ”good job man!” If everyone knows the exact goal, automatically you have motivation. 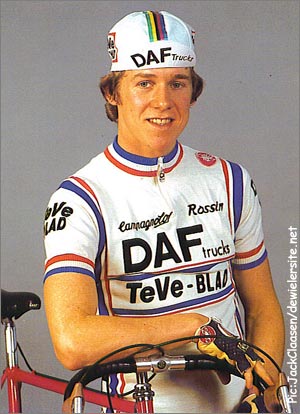 PEZ: There was a French interview where you talked about using bicycle racing as a way to get out of working in the factory for the rest of your life. Tell me about that.

Demol: I have great parents. A good family life. But at that time, it was in 1973 and I was 14, I didn’t have the chance to go to school. So, at 14 I was working in the factory making carpets. It was a job from 7:00 am in the morning to 4:00 pm in the afternoon. At that time I really liked to ride my bike. Every Sunday morning I would go with my brothers to cycling club rides. Every Sunday we would do a 50 mile ride. I actually started that when I was 12.

When I was 15 I started racing. I wouldn’t say I was good but I was doing ok. I won some races my first year. At 17 I did everything I could to become a national rider. I didn’t want to stay my whole life in the factory. I wanted to have some freedom. At the beginning my parents were against me racing because they were afraid I would get hurt. After a few races they saw that I did well.

After my work, I jumped on my bike and rode my bike for one or two hours sometimes longer and on the weekend I did at least one competition. For me bicycle racing was a way to escape from the factory. At that time in Belgium, there was a rule that you have to be the age of 22 before you could turn professional. I got a contract a couple of days before Christmas in 1981 and I closed the door to the factory and said bye bye!

Toolbox: Just What IS Fatigue?