The race don’t run without the good guys turning wrenches, and one of the best in ‘da biz is Team Discovery Channel’s Alan Butler. We dropped by the pits for a chat before Stage 2, and got a peak inside the truck, plus some interesting scoop from the guys who really keep the racers running…

“Congratulations on Signor Savoldelli’s win,” I say as my introduction to Team Discovery Channel mechanic Alan Butler on the Sunday morning after yesterday’s 6.2 kilometre stage one time trial. He laughs and replies; “Come and see this then!” Savoldelli’s rear disc wheel, with Hutchinson “Gold carbon” tubular still in place is in a rack beside the work bench in the back of the truck, he spins it, examining the tyre closely, stops it, spits on his finger and rubs at the tread. 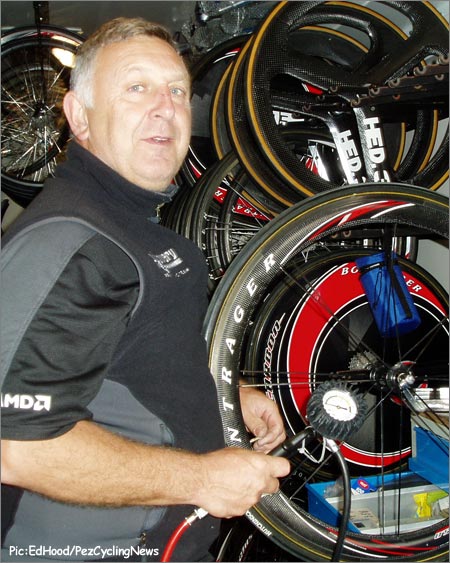 There is a 70 mm flat spot in the rubber. “He went over the speed bump at the bottom of the descent too fast and locked-up the back wheel into the corner.”

Discovery Channel have three mechanics, all from Commonwealth countries; Alan is from Nottingham in England and was on the spanners with Postal and Discovery for six of Lance’s seven Tour wins; Geoff Brown from Ottawa in Canada started with Motorola way back in 1988 whilst new-boy Craig Geater is from New Zealand and is a recent defector from rival squad CSC. 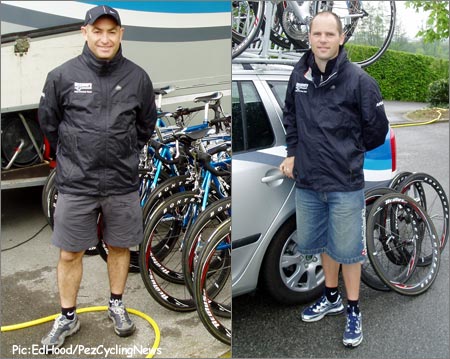 Geoff Brown (l) of Canada, and Craig Geater of New Zealand round out the team’s mechanical support crew.

So what’s the worst part of the job Alan, apart from idiot journalists asking questions of course?
“Apart from washing the bikes and cars it’s the long hours and the driving. In the mountains you can’t take the truck over the parcours, I remember one mountain stage in the Tour where the stage was 186 kilometres but we had to drive 342 kilometres to get to the finish.” 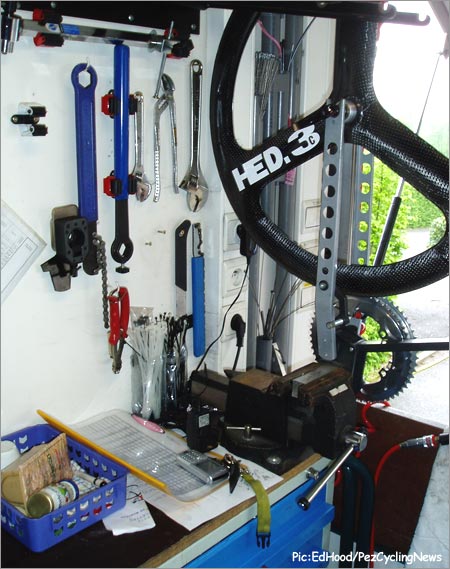 And the best part of the job?
“There’s great satisfaction when you get a result like yesterday, Paolo won by a huge margin for the distance and it’s good to be part of that, although I suppose you get a bit blasй about it. I was with the team when Lance won his second Tour and that was amazing, by the seventh one it was par for the course, with Lance I always felt that anything he really wanted to win there was no question of him failing. Apart from that aspect it’s great visiting all the places we do and meeting such a vast variety of people.”

Where do you like working best?
“Spain, the weather is good, the coffee is good. Geoff Brown finishes the sentence; “and you can usually pick up nice wine at good prices.” 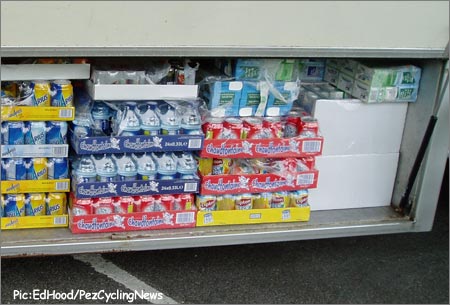 The truck carries a full supply of race supplies – including lots of drinks .

And the least favourite place?
“Belgium in the spring, when it always rains.”

Who is the fussiest guy on the squad?
“I wouldn’t say he is fussy, but Paolo (Savoldelli) knows what his bike should be like and what feels best for him, let’s say he has great attention to detail.”

So who are easiest to work with?
“Pavel Padrnos (Czechoslovakia) and Benoit Joachim Luxemburg) are the best, you give them a new bike, they ride it and you say; “is everything OK guys?” and they just say; “yeah, fine,” it makes life simple working with riders like that.” 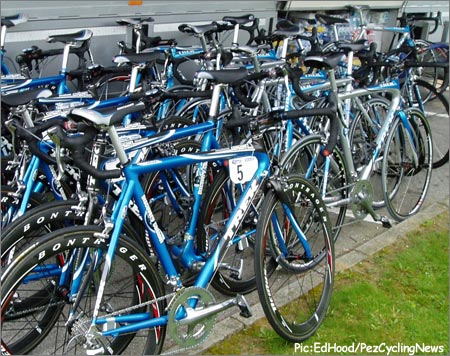 The blue bikes are new for the Giro, the gray ones are spares.

Tell us about the velos Alan.
“Every one has just got a new carbon Madone SSL for the Giro, usually the guys get new bikes at Tour time but with Paolo being a big favourite Trek decided the team should have new machines for the race. They are blue, the ones they got at the training camp in Solvang, California back in January are silver and they are now the spares which go on the team car roof. Group sets are Shimano and wheels, bars, stems and handlebars are all by Bontrager which is part of Trek; headsets are by Chris King. Everyone is on Shimano pedals too, if a rider joins the team and is on, say Speedplays, then he has to change to Shimano and no arguments, it makes life so much simpler. We have clinchers on the spare bikes but we race on tubulars; Hutchinsons – that was down to Lance, he loved his Hutchinsons did Lance. The most punctures we’ve ever had in an entire Tour on them, is four.“ 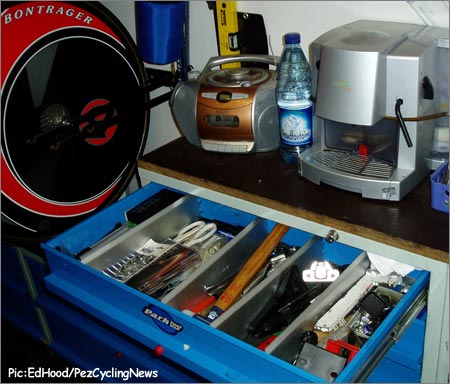 The nerve center of any team truck… the espresso machine.

In these days of synthetics and man-made fibres is it still a valid notion to mature tubulars?
“Definitely, we get 400 tyres a year from Hutchinson but because we have so few punctures we always have some left over, those that are matured are definitely better; they say a tub is not at it’s best until you no longer get a smell of rubber from it.” 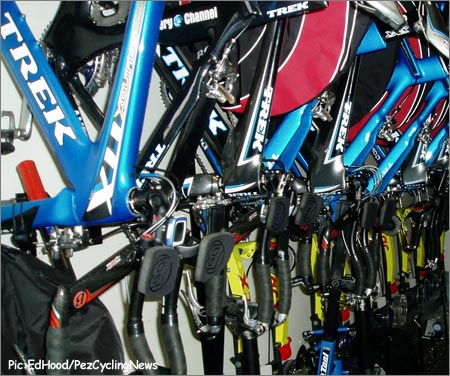 Everything in its place: TT bikes, work stands, and turbo trainers.

A thing I’ve noticed on the design of the Treks is that the centre-line of the seat tube comes in ahead of the centre of the bottom bracket, why is that?
“Trek tell us it’s to get the size of the two triangles formed by the top, seat and down tubes at the front of a similar size to the triangle at the back formed by the seat tube and the chain and seat stays, apparently this distributes the stresses more evenly throughout the frame.”

Why have Trek not gone the hiddenset route, is it a royalties issue?
“This year we actually have hiddensets on the TT bikes, but on the road bikes I think the main reason is that it would mean all the frame moulds would have to be replaced and that would be very expensive.” 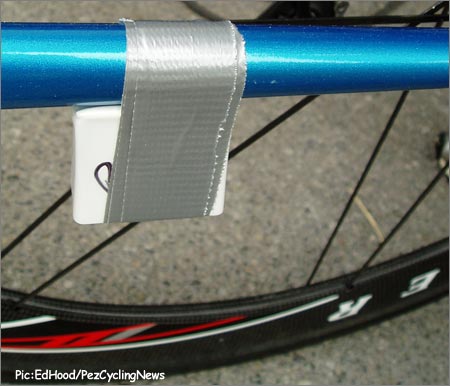 Aah duct tape – that timing sensor is on for good.

What’s the plan for stage 17 to Plan de Corones and the 24% gradients?
He shakes his head before answering; “Its crazy, it doesn’t even have a surface, were talking about it just now, but we think it will be 36/52 double rings with a 30 rear sprocket but we’ll use Shimano triple mechanisms front and rear. 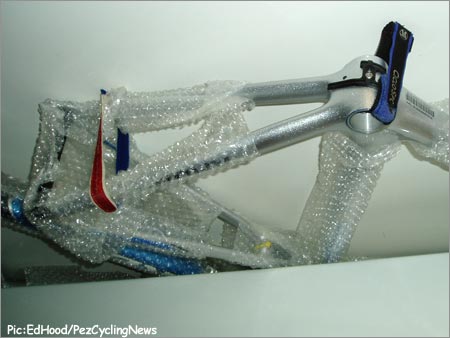 The truck is literally packed to the rafters.

Final question, how much stuff do you have in the truck?
“We have nine riders on the race, each has a race bike and a spare, except for Paolo who has two spares, then there are:
– the time trial bikes and the spare time trial bikes, that makes 37 complete bikes.
– 61 pairs of wheels and nine spare rear disc wheels.
– five spare frames and five complete spare group sets
– 20 pairs of handlebars.
– nine turbo trainers for warning-up on, plus all the tools and race food.
Oh, and there’s the espresso machine!” 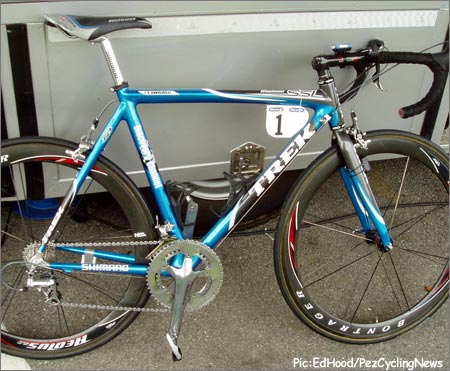 And in case you wondered what are Paolo Savoldelli’s vital statistics – here’s the numbers:

• Good luck to the Discovery Channel guys – seems they’ve left nothing to chance as usual – and thanks to Alan for talking to PEZ!