In a weird reversal of roles, an unbalanced amount of the ‘gamour’ of pro racing is reserved for the men. Women’s racing lags far behind in prize money, sponsorship contracts, and respect. But the struggles most women pros endure would make you shudder… British pro Leda Cox has her foot in the door of Continental racing, but it’s not been easy. PEZ chats with Leda about women’s racing, organization, prize money, and more…

Ed: Hey ! Richard, I got an idea for a story – “the hardest men in cycling”; so we get this picture of Abdoujaporov when he hasn’t shaved for three days and . .

Richard: Ed, you have to become more balanced man, hardest men in cycling, driving all night to races, Guy Smet and his 55 x 11 – it’s all too macho. I want you to interview a lady, we need your stuff to be more well-rounded dude.

Richard: Do still want to go to Milan-San Remo, Ed?

Leda Who?
Leda Cox from St. Albans in England is living the dream: her husband is her coach and biggest supporter and she’s just landed a contract with an Italian pro team for 2007.

She took time-out to tell Pez a little about the world of women’s Pro Tour cycling. Least you think it’s an easy gig, she was doing five hours on the road the day after she spoke to us.

PEZ: Unlike the men’s ProTour, the women still race for a World Cup, tell a bit about how it’s set up…

Leda: Yes there are nine races, starting with the Geelong event in Australia on March 3rd and going through to the Rund um die Nurnerger in Germany on September 16th. [Note: Whilst the UCI policy of “mondialisation” has been abandoned for the men’s competition it is still in place for the women – as well as Australia they visit Canada and Scandinavia].

The programme pretty-much mirrors many of the men’s races; for example, I was meant to ride the Primavera Rosa – which is the female equivalent of Milan-San Remo, three years ago but it got snowed-off and we ended-up sitting in the hotel foyer instead! There are good crowds for all the European events, I’m not sure how well-supported the Australian leg will be though. There’s a women’s Tour of Flanders and Fleche Wallonne too, by the way.

PEZ: How does the prize money compare to the men?

Leda: It’s dramatically less, measured in hundreds rather than thousand of euros. You can just about live on what you win and what you get from the team. There are only a couple of girls that you would describe as “comfortable” financially. Start money doesn’t really come in to women’s racing either. But most of us aren’t in it for the money, it’s because we love the sport. 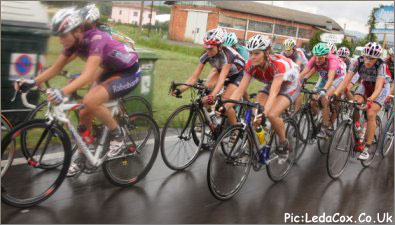 The Giro del Toscana was a wet affair, but a good ride for Leda.

PEZ: How does the level of organisation within the teams compare with the guys?

Leda: In Italy especially it can be a bit slap-dash. The teams can’t afford to have full-time staff so it tends to be people who are involved because it’s “the thing to do”, maybe they work in a bike shop or used to be riders themselves.

PEZ: How did you get into cycling?

Leda: My brother raced as a pro in Spain. I was inspired by him and I started commuting to work on a mountain bike, I was hooked at once. After that my mum bought me a proper racing bike and I started riding some races on the Hillingdon circuit.

PEZ: So, your beginnings were in UK races?

Leda: Yes, I rode predominantly at Hillingdon and Goodwood, where I got my first win.

PEZ: Where did the continental connection come-in?

Leda: A Dutch pro-team manager who had brought a team over to race in the UK saw me and offered me a place on the team. When you go over there and experience how hard the racing is you realise that’s where you want to be and it gives you something to aspire to. Then it’s down to plugging-away and dreaming.

PEZ: I believe your last pro team folded, what happened there?

Leda: The team was linked to Lazio (Rome) Football Club which was involved in a big match-fixing scandal, it really rocked Italian football. All of a sudden the money disappeared and that was that.

PEZ: tell us a little about your new team.

Leda: It’s called Saccarelli, they make frames and are based in Umbria, Italy. It’s an eight rider squad, six of us are full-time with four of us sharing a house that the team provides. We’ll be riding a full World Cup programme although we won’t be riding the first round in Australia because that would be take-up too much of our budget. We’ll also be riding all the women’s stage-races in Europe, including the Giro. 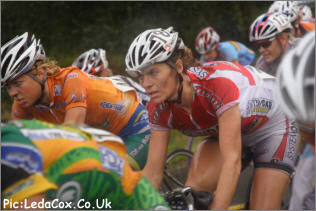 Leda enjoying all the best that Italy has to offer.

PEZ: How did the Worlds at Salzburg go for you this year?

Leda: That’s a bit of a sore point, I wasn’t selected; there’s a lot of politics involved in selection and I think I was riding well-enough to go but was passed-over.

PEZ: How does your husband take to you being away from home so much?

Leda: He’s my coach and my biggest fan so he just wants to see what’s best for me.

Leda: To find my feet in the new squad; be a good all-rounder for the team and establish exactly what my role will be within the set-up. For example, I know we have sprinters on the team so we’ll need to talk about how we support them. I’ll be travelling-out to Italy in late February or early March. Right-now my motivation is very high and I’m really looking forward to the new season; I’m already training hard, tomorrow for instance, I’ll be doing five hours. 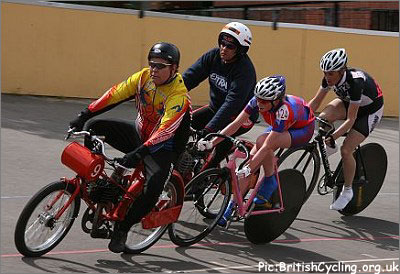 Leda is also active on the track.

PEZ: What has been your lowest ebb in cycling?

Leda: Four years ago, I crashed in a criterium and had to have spinal surgery as a result. It took me a year-and-a-half to recover; that was a real test of my character.

PEZ: And the best time?

Leda: What I’m doing now, racing on the Pro Tour is great but I think probably my best memory is when I won a National Series race at Goodwood by two minutes, I just had such great legs – it’s always great to win isn’t it?

PEZ wishes Leda every success for 2007 and we will be keeping in touch with her as the new season progresses.