They’ve got the big-time GC guys, the mountain goats and the chrono-men; yeah, yeah – but have they got a sprinter? He’s tall, good looking, has the bracelets, the big watch, the stubble, doesn’t like hills and last year he cracked the big league with a Vuelta stage win; meet Francisco Jose Ventoso Alberdi.

PEZ: Have you always had a good sprint?

Francisco: Yes, since I was at cycling school I’ve always had a good finish, I had more than 100 wins before I turned pro – all in the sprint. 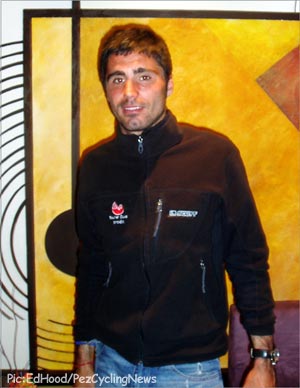 PEZ: Did you have a sprint hero when you were young?

FV: Abdu! [Uzbekistani kamikaze, Djamolidin Abdujaporov]. When he sprinted it was always a big show, very spectacular, all over the road.

PEZ: Do you do specific sprint training?

FV: I don’t do specific sprint training but I work on my climbing because I need to improve it and I do a lot of power training and speed-work. 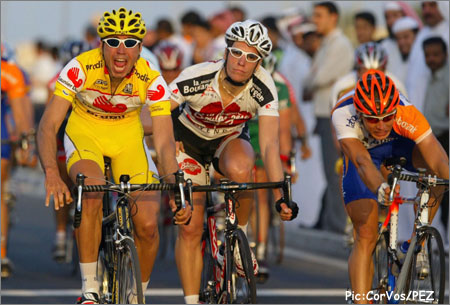 As a fresh faced 22-year-old in Qatar – Ventoso swiped the win.

PEZ: You scored two wins as a first year pro but none in your second year.

FV: This was because in my second year my programme was much tougher, I started to ride events like Paris-Nice, the Giro and the Vuelta. In my first season they let me ride a less difficult programme so I was able to win at that level. (Ed. yeah, that win at Philly was pretty easy.)

FV: I’ve ridden a lot more kilometres now, a lot more races, my body has adapted to the demands of pro racing. I can train harder than I used to and I recover much better now too, 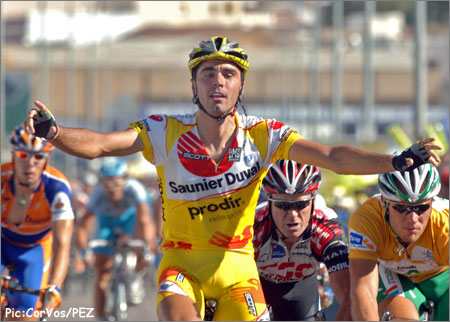 Big Win #1 came at the 2006 Vuelta for Ventoso – ahead of some pretty fair sprinters.

FV: Everything! I’ll be riding a full Pro Tour calendar, starting with Milan – San Remo and going through the Tour and Vuelta.

PEZ: Who impresses you most among the current sprinters?

FV: Oscar Freire, no question, he is the master of focussing on a particular race and getting the result he wants.

PEZ: You’ve been with Saunier since the start, tell us about the changes.

FV: The team has been growing step by step, getting stronger to fight for the GC in the big Tours. 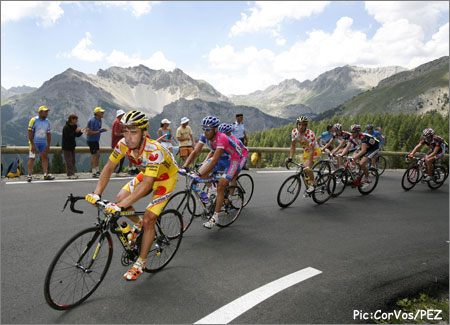 Ventoso doesn’t love climbing, but he gets the job done – here at the Tour de France this summer.

PEZ: What’s your style of sprinting?

FV: The Petacchi style where you have a lead-out train and launch off that. I favour a controlled sprint where the trains wind it up. I have good lead-out men here – but not as good as Milram I’m afraid!

PEZ: What about the hills?

Thank you Francisco, may you have nice flat 2007.