Well, amazingly for a man of such talent he had never won a professional road race in Europe! Graeme has eight Tour de Langkawi stage wins to his credit (a record for the race), has worn the sprinters jersey in the Giro d’Italia and a stage win in the Tour Down Under in his palmares amongst many other highlights, but until his recent victory in the ProTour, Tour of Germany Graeme was yet to win on the continent…so he won twice in the span of one week – what a way to end the drought! 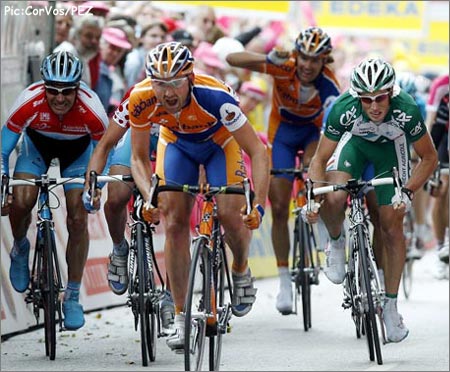 Graeme Brown opened up his European account early in the DTour.

After a frustrating couple of injury filled years, Graeme has signed this year with Rabobank, stepping up from the pro-continental ranks into the ProTour league and has now shown some of the big boys in the peloton exactly how quick he is. We interviewed Graeme just a couple of days after his stage 4 victory in Germany (and right before his win in the final stage)

PEZ: Congratulations on your first European win the other day mate, first year in a ProTour team now, first big win, are you feeling this is the start of bigger things? 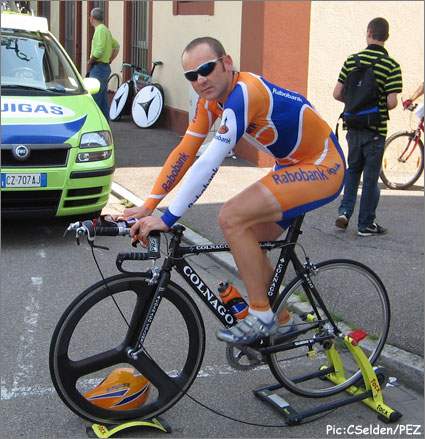 Every good TT starts with a warm-up and a picture.

PEZ: What’s on the agenda in the coming months?

Graeme: Umm, I don’t know the names of the races actually (laughing), but there’s one in Holland and one in Belgium in two weeks and then I have Paris – Brussels and then I’m not sure after that.

PEZ: And are you a chance of going to the world titles?

Graeme: Um, I haven’t really thought about it to be honest, I might have to speak to the guys about that. If I’m still feeling good then I would put myself on the line for guys like Stuart O’Grady. I can’t see myself winning the world championships but I could definitely be some help for maybe Stuey to get there. 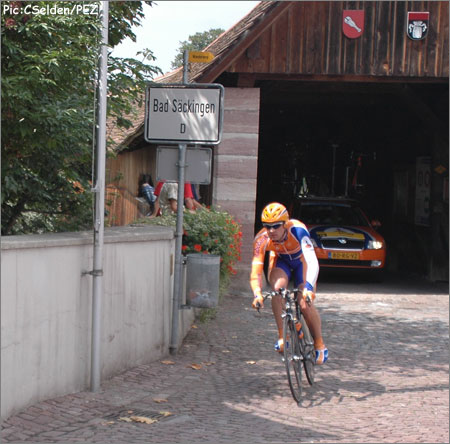 Brownie emerges back into the sunlight after a brief jaunt through the TT’s covered bridge.

Graeme: Oh, hell yeah. Like I said before, I think I’ve got the ball rolling now and hopefully the team has more confidence now and I can prove something more.

PEZ: Who are your main lead-out guys here at this tour?

Graeme: I’d say Hayman (fellow Aussie and longtime Rabobank rider) but we don’t really have a certain, say, lead-out man but the other day it was Gerben, Gerben Lowik who was there at the finish and he did a perfect job and the day before Matt Hayman was there, it’s whoever’s got the good legs on the day and see how it goes basically. 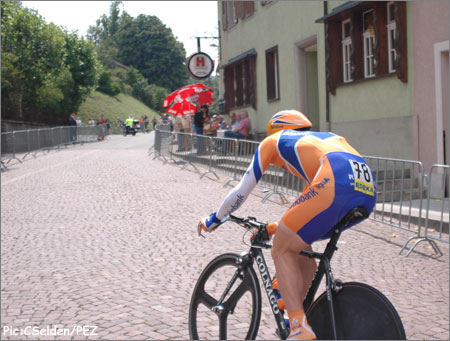 PEZ: As an Aussie myself, I know how quick you are and have always been, but it’s good to see that you are showing it here now in Europe.

PEZ: How’s the difference been for you stepping up from continental (Ceramica-Panaria) to a ProTour team?

Graeme: Well for me, I think I’ve had a really big difference in years because the last two years I’ve had an injury with my Achilles and I had it operated on last year and this year I haven’t had any problems. It’s the first year that I haven’t had an injury, in fact I think it’s the first year since I’ve been professional that I haven’t had some sort of injury holding me back. So far so good. It’s good to put together a reasonably good year. I think that it definitely makes a difference – injury free! (laughing) 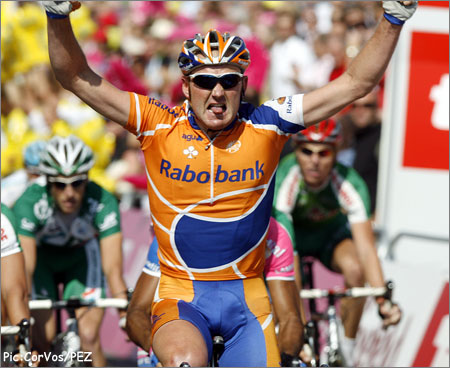 PEZ: Would it have been since the games in Athens that you had your last big results? (Graeme won Gold in the teams pursuit and also the Madison on the track, teaming up with Stuart O’Grady to make an incredible pairing).

Graeme: Last big result, yeah. I mean I’ve never really had any major victories on the road like this (Tour of Germany), last year I did have 5 victories in Malaysia though.

PEZ: You seem to be really at home there in Langkawi? You’ve always done well there. (8 stage wins and the points classification title in 2003 and 2005)

Graeme: Yeah, I like it there. It always seems to work for me. I’ve always had good early season form. Some people criticize me for my early season form (smiling), but for me that was my major race for the year. But now, with Rabobank it’s a bit different and I have major races all year.

PEZ: Now you’re in the Protour, what about your track aspirations? Are you finished there (having achieved SO much), or are you going to keep going?

Graeme: Um, no I definitely want to continue and do Beijing in 2008.

Graeme: I think the Madison again and I’d like to do the road as well. Definitely the track though, its something that I really enjoy and I always look forward to going back to it.

PEZ: Thanks for your time today Graeme and congrats again on your win.

Look out for Graeme on the track again in Beijing, but in the meantime check him out carving up the roads of Europe in the Rabobank strip. I’m sure it won’t be long until we see him with his hands raised again after unleashing his blistering pace on a somewhat unsuspecting peloton. He may not be too well known amongst some of the other riders in the ProTour, but just ask people like Cipollini, Zabel and McEwen who have clashed with Graeme over the years (sometimes literally…). They all know of Graeme’s amazing pace and I’m sure many others will learn of it too in the coming years.

To see more of Graeme check out his website: GraemeBrown.com.