The Bio-pic The Flying Scotsman hits dvd shelves this month, and recounts the struggles and triumphs of Scotland’s Graeme O’Bree – twice holder of the world hour record. Our own Scotsman Ed Hood talked with Graeme about the film, and filed this translation…

A skinny, shy kid from humble origins in the far-from-affluent, south west of
Scotland with a cycling background of riding early morning Scottish time trials. By sheer force of will he took himself to two world pursuit championships and two world hour records – beating figures set by Francesco Moser and Chris Boardman, no less. And all on bikes he built himself, in the garden shed and on a diet of corn flakes and marmalade sandwiches (or ‘pieces on marmalade’, as we say in Scotland). Does it sound a bit too ‘Hollywood” to be true? MGM certainly thought it was Hollywood-enough, when they picked-up on the Graeme Obree bio-pic, “The Flying Scotsman”.

The movie is released on DVD this month, Pez took time to talk to the man himself.

Pez: Hi Graeme, I’m ringing for the interview at 5.20 pm on the button, as agreed.
Graeme: Oh, yes, I’d forgotten! I was just going out!

That’s the Graeme I know and love, all right! After the pleasantries, we got down to the Q & A.

Pez: How does it feel to see your life in front of you, up on that big screen?
Graeme: Horrible, I’ve seen the film a couple of times, there are some very intense, uncomfortable scenes and I don’t want to see them again. I don’t want to be trapped in the 90’s.

Pez: Has the film helped those ‘demons’ you had.
Graeme: No, writing the book did that, the film wasn’t part of the process. I just saw the film as a good laugh, a ‘gas’. 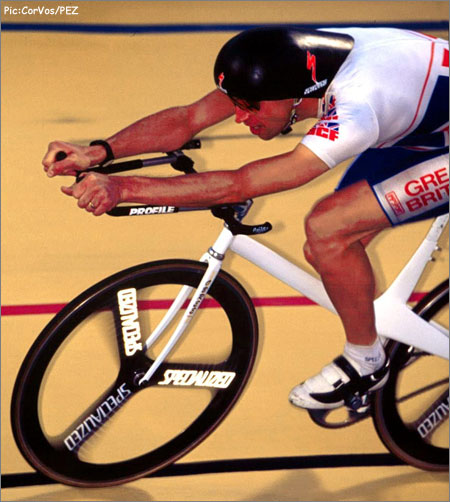 Pez: Who approached you with the idea?
Graeme: Peter Broughan, the producer of the movie, Rob Roy. The original idea for a film of my career came from Gaumont of France, though.

Pez: Who did the negotiating?
Graeme: At the start, I had an agent, but as things unravelled and it was on/off about whether the film would be made, I ended-up negotiating my own deal. I’m not happy with how all that worked-out, there’s a lot of politics and intrigue in the world of film making and at the end of it all, I’m still due money, along with a lot of other people who were involved. On the set, I acted as a consultant, provided the bikes, did some riding for the non close-up shots and also did some of the bike-cam work.

Pez: How close is the film to reality?
Graeme: What I say to people, is; “if you want the real story, then read my book.” But that’s usually the case, isn’t it? However, if you were a member of the public, who didn’t know my story, you would go-away with an accurate impression of the key facts.

Pez: The film seemed to take a long time to get from shooting to the screen. Graeme: The original production company went bust and there was no distributor. They had to organise a distribution deal, but it took ages before MGM came along. I think they got the launch timing wrong – during the Tour de France – with all those druggies!

Pez: Has the film given book sales a boost?
Graeme: I don’t know, all these things take so long before you get feed back.

Pez: What was it like, working with the stars – Jonny Lee Miller and Brian Cox, for example?
Graeme: The big stars are nice people, normal with no airs and graces. The only thing is that it’s very hierarchical, the crew don’t speak to the actors and the extras don’t speak to the crew or the actors. If you are a camera man and your kid is a mad Jonny Lee Miller fan, you would never dream of asking for an autograph for him. It was great for me, I could talk to whoever I wanted. 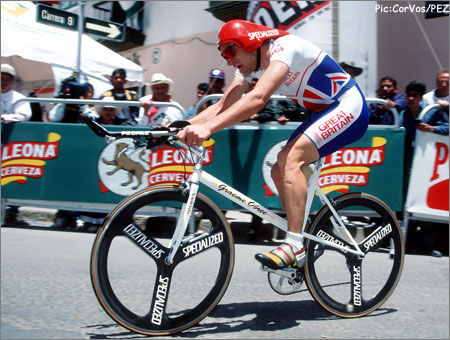 Pez: Has life gone “Hollywood” on you?
Graeme: Not at all, I haven’t even had a passport for a year-or-more. There’s been no premiers, or anything like that, just interviews, like this.

Pez: A career question – any regrets?
Graeme: Just that I was fired by le Groupement before I got a chance to prove myself. I have to watch what I’m saying, for legal reasons, but it was because I wouldn’t get involved in taking their team “preparations”. When I raced in pursuits, I knew that some of the opposition weren’t ‘clean’, and it was a big spur for me to beat them. It was disappointing too that I never received another offer from a pro team. I think I still had some big rides within me, but that’s all in the past.

Pez: Final question – is Graeme Obree a happy man, these days?
Graeme: I don’t ‘do’ present-tense, I always look to the future.

We thank Graeme for his time, hope the future is bright for him and that maybe one day he’ll see some of that missing cash. 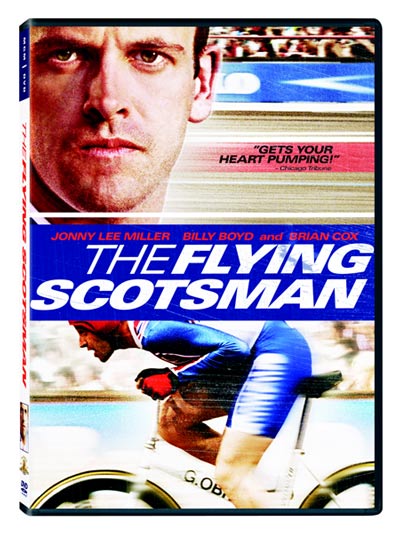 “Gets Your Heart Pumping…” – Chicago Tribune

The Tale That Inspired A Nation Arrives On DVD September 18, 2007

“My biggest regret of my career is mentioning that there was a bit from a washing machine in my bike, now forever I will be remembered as the washing machine guy.” – Graeme Obree

Century City, CA – Experience the inspirational and true story of an unlikely cycling champion who battled the odds to reach the pinnacle of his sport in The Flying Scotsman, riding onto DVD September 18 from MGM Home Entertainment. Jonny Lee Miller (Trainspotting, Melinda and Melinda) stars as Obree, an amateur cyclist and homegrown hero who became Scotland’s two-time world one-hour cycling record holder while also struggling and learning to cope with debilitating bouts of depression and anxiety. A true testament to the human spirit, the film spans the period of Obree’s life that saw him take, lose, and then retake the cycling title as he races to victory on a bicycle he built himself from scraps of metal and washing machine parts. Featuring a remarkable supporting cast including Laura Fraser (Vanilla Sky, A Knights Tale), Billy Boyd (The Lord Of The Rings Trilogy, Master and Commander), and Brian Cox (Zodiac, Running With Scissors), The Flying Scotsman is a triumphant tale about a defiant outsider who’s perseverance, undying commitment and ambition allowed him to ride victorious against well-financed, professionally trained competitors on the international cycling scene. 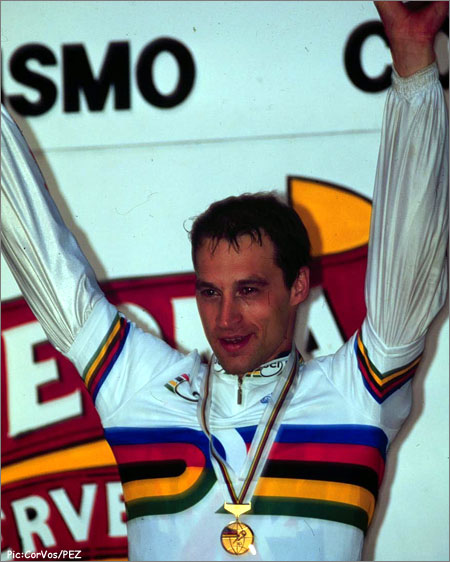 The Flying Scotsman is presented on a flipper disc in both full screen and widescreen format for the suggested retail price of $27.98 U.S./$43.48 Canada. Prebook is August 22, 2007.

Synopsis
The Flying Scotsman is a true story based on the inspirational and remarkable Scottish cyclist, Graeme Obree. In 1993, this unemployed amateur broke the world one-hour record on a bike of his own revolutionary design, which he constructed out of scrap metal and parts of a washing machine. Shortly after Graeme broke the record, he lost his title when another cyclist beat his time. This only served to motivate Graeme to break the record again, while also battling mental illness.

DVD Features:
The Flying Scotsman DVD is available in both widescreen and full screen versions on a DVD-10 flipper disc and features English 5.1 Dolby Surround Sound, as well as French and Spanish 2.0 Dolby Surround and English and Spanish subtitles.