So, I’m sitting tapping the keys in the press room and this dude sits down next to me – Graham Watson, the ace cycling photographer; there’s no way he’s getting away from me! So PEZ’s Edmond Hood got out his trusty pen and paper and let his weary hands get hold of a yet another fantastic story.

PEZ: Are you a stats-guy Graham?

PEZ: Can you try – how many Tours and how many Worlds? 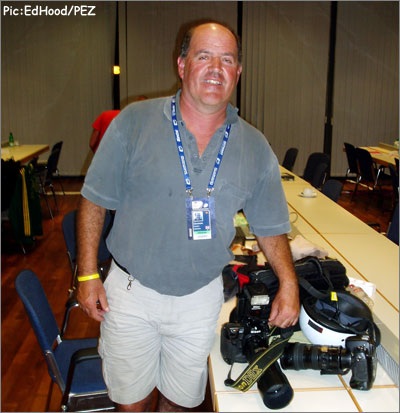 A veteran of TWENTY-SIX Tours de France! I can speak only for myself, but that’s three more than this editor has been alive.

PEZ: How did you get into cycling photography?

Graham: I used to do high-class portraiture photography in London but I couldn’t afford a car to drive to work so I started to cycle, about 20 kilometres each way. I got quite fit and got into club cycling; in 1977 we went to see the Tour.

Right there and then I knew it was what I wanted to do. It took me until about 1980 to get fully into it but I was quite lucky, it was the start of the English speaking invasion of the peloton and there was great interest in our media about guys like Lemond, Kelly and Anderson. Magazines wanted to buy shots of these English-speaking guys.

PEZ: Do you cover any events other than cycling and how many races per year do you cover?

Graham: No, just cycling, about 170 days per year plus the travelling.

PEZ: Do you get the chance to enjoy the racing?

Graham: Yes, in fact I sometimes I get a bit caught-up in it and miss the shot!

PEZ: Is the digital world a happy one for you?

Graham: There’s a good side and a bloody awful side to it. The good side is that there’s no stress, it’s all automated and all your work is done in the same day, you don’t have to mess around with dark rooms and couriers. The bad side is that it’s made taking good shots too easy, you have millions of people out there who can take a good shot because the camera is so good, it’s driven the price of our work down.

Graham: I carried my own portable film lab and chemicals with me until 1998; I had to set-up a dark room in my room each night. I started going digital before that in 1996 – I took slides, scanned them and sent them digitally. I was waiting until I felt that the cameras were up to the standard I thought was required so I only went fully digital four years ago.

PEZ: What hardware do you use?

Graham: Nikon, I carry two D2X’s and a D1X plus a full range of lenses from fish-eye to 300 mm; replacement value would be around 30,000 euros I guess.

PEZ: How many publications print your pictures?

Graham: On a monthly basis, around seven or eight.

Graham: If I had to select one, it would be the worlds – it’s always on a circuit which has barriers all the way round, I feel it makes it sterile, lacking in character not on ‘real’ roads like the classics.

PEZ: Who is/was your favourite rider to photograph?

Graham: Hinault, Kelly, Indurain, Ullrich and I have to say Lance or he’ll get upset with me! I have to think about the current era but probably Frank Schleck

PEZ: What was your favourite era?

Graham: The Kelly years from the late 70’s to the early 90’s

Graham: Yes, 1986 Hinault and Lemond climbing Alpe d’Huez side by side.

PEZ: Do you ever think about life after cycling?

Graham: I have no reason to, I still enjoy it and I’m still making a successful living from it.

When we shook hands and I said thanks and good night it was nearly 9.00 pm on a Saturday night – but at least he wasn’t heading for the dark room. .

PEZ TEST: SRAM’s FORCE Is With Us